The 1959 Buick engine and transmission when properly aligned with the frame will rest in a normal position which does not impose any shear strain on the rubber mounting pads. During assembly, the transmission support is accurately located (with respect to the front engine mounts) both fore and aft and sideways. For this reason it is very important that the position of the support not be changed either by the removal or addition of shims to move it sideways or by moving it forward or backward. Whenever it is necessary to remove the support or loosen the support to frame bolts the support and frame should be marked at each end of the support to enable reinstallation in the same position. Also, the number and location of shims at each end of the support should be noted so they may be reinstalled in the same location. The following procedure should be used when tightening mounts to obtain proper adjustment.

NOTE: When installing an engine or transmission, the 1959 Buick front engine mount to frame bolts should be the last mounting bolt to be tightened. Also, if a gap exists between the mount and the frame with the mount bolts loosened, the space must be filled with shims before the mount bolts are tightened.

364 automatic transmission and 401 engine flywheels are not interchangeable. The 401 flywheel has greater unbalance to compensate for the greater weight of the rear throw of the crankshaft. The 401 engine flywheel can be identified by four scallops cut into the edge of the flywheel between the “1 o’clock” and the “9 o’clock” leg while the 364 automatic transmission flywheel has all three sides straight. 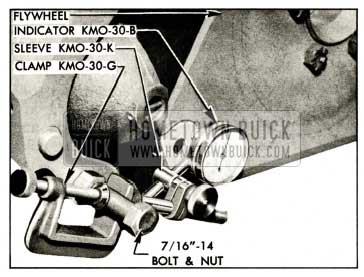 The three legs of automatic transmission flywheels should all bear equally against the converter pump cover. Before attempting to balance a 1959 Buick engine transmission assembly the following procedure should be observed: 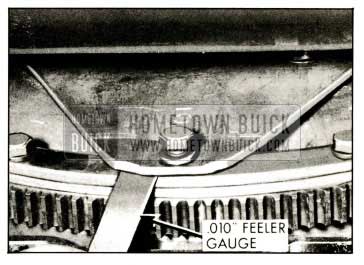 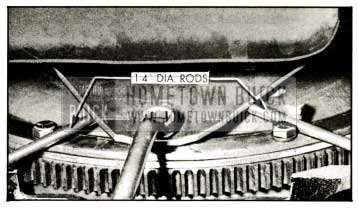 Individual 1959 Buick crankshafts, flywheels, and other rotating parts are dynamically balanced to very close limits in production. Completely assembled 1959 Buick engines are also given a running test and balanced to very close limits by drilling the flywheel or by adjusting converter balance weights as required. For this reason, a converter pump should always be marked so that it can be reinstalled in its original position on the flywheel.

Determine the 1959 Buick engine speed at which the vibration is most pronounced, so that test at this critical speed may be made after corrective work is done.

NOTE: Do not place a weight at a flywheel to converter driving bolt because these bolts are not long enough for addition of weights. 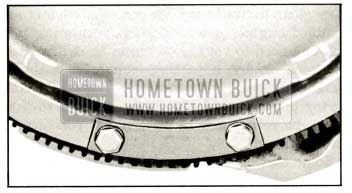 NOTE: When factory balancing of converter pump is changed to balance an engine, the pump cannot be used with any other engine.

If the vibration developed after removal and installation of clutch assembly, check all clutch cover bolts to make sure they are of same length and that each has one lock washer. Also check . marks that were made when clutch was removed and disassembled to make sure that clutch was assembled and installed according to these marks. Make any corrections indicated by this inspection and run 1959 Buick engine at the critical speed to check results.

If 1959 Buick clutch assembly and installation does not appear to be at fault, mark clutch cover and flywheel and remove clutch assembly. Run 1959 Buick engine at critical speed and check for vibration. If vibration is eliminated, the clutch is at fault and should be balanced as described below. If vibration still exists, however, it will be necessary to balance the flywheel on the crankshaft.

To balance the 1959 Buick flywheel, insert one clutch cover bolt successively in each hole in flywheel and check results at each position by running the engine. It may be necessary to vary the test weight by adding washers or by using a shorter bolt. When a proper weight and position has been found to eliminate the vibration, the bolt will be on the light side of flywheel. Remove the bolt and drill shallow holes in diametrically opposite side of flywheel, until enough weight has been removed to make engine run smooth. Use a 3/8″ drill and do not drill any hole more than 1/4″ deep.

After making sure that 1959 Buick engine runs smooth with clutch removed, install clutch assembly according to marks made before removal and again check for vibration at the critical speed. If vibration exists with clutch installed, install one plain washer under the lock washer of each clutch cover bolt in turn until a location is found where the engine runs smooth. It may be necessary to place plain washers on two adjacent bolts in order to obtain enough weight at the proper location to secure balance. 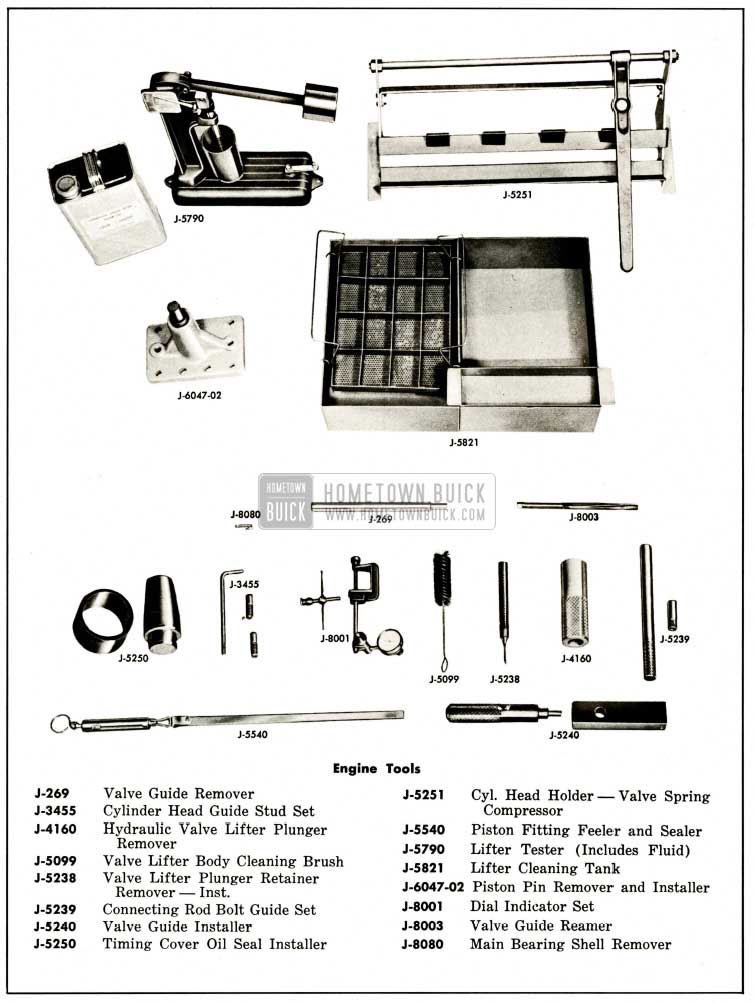