Use a reliable torque wrench to tighten the parts listed, to insure proper tightening without straining or distorting parts. These 1959 Buick rear axle specifications are for clean and lightly lubricated threads only; dry or dirty threads produce increased friction which prevents accurate measurement of tightness.

Gear ratios are indicated by numbers stamped on the bottom of the axle housing. 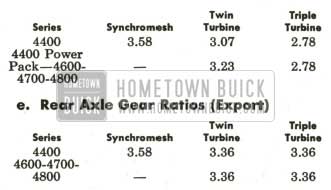 Speedometer gears must correspond to axle ratios in order to have correct speedometer and odometer readings.

The 1959 Buick rear axle assembly is of the semi-floating type in which the car weight is carried on the axle shafts through ball bearings enclosed in the outer axle housing. It has a full torque tube drive and coil springing. Its final drive is a hypoid type ring gear and pinion with the centerline of the pinion below the centerline of the ring gear. See figure 6-1. 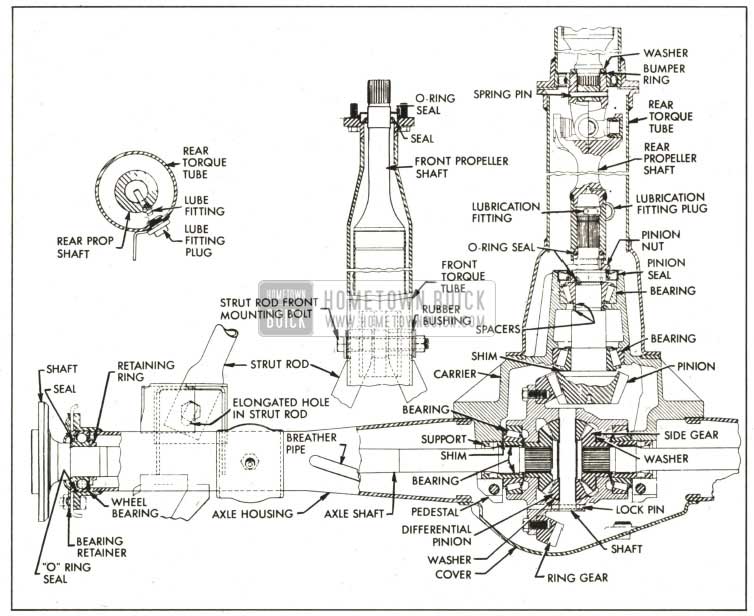 The drive pinion is mounted in two tapered roller bearings which are pre-loaded by two selected spacers at assembly. The pinion is positioned by shims located between a shoulder on the drive pinion and the rear bearing. The front tearing is held in place by a staked lock nut. The differential carrier casting has an oil feed passage to the pinion bearings and an oil return hole so that the oil will circulate and cool.

The differential is supported in the carrier by two tapered roller side bearings. These are pre-loaded by inserting shims between the bearings and the pedestals. The differential assembly is positioned for proper gear and pinion back-lash by varying these shims. The bearings are centered on the cross axis by lock taper cones secured in the pedestal bores by clamp bolts. The ring gear is bolted to the case. The case houses two side gears in mesh with two pinions mounted on a pinion axle which is anchored in the case by a spring pin. The pinions and side gears are backed by bronze thrust washers.

The 1959 Buick rear axle shaft inner splines engage the differential side gears with a floating fit. The outer ends are supported in the axle housing by thrust type ball bearings which also contain oil seals. The bearings are secured against a shoulder on the shaft by a press fit retainer ring. A retainer plate holds the bearings against shoulders in the housing. Wheel side thrust is taken at the wheel bearings, so an axle shaft may be removed simply by removing the bolts holding the retainer to the brake backing plate and axle housing flange.

A seal mounted between the rear flange of the torque ball and the front flange of the front torque tube bears against a ground seal surface on the front end of the propeller shaft to prevent transmission oil from passing into the torque tube. An O-ring around the O.D. of this seal prevents oil from by-passing around the seal. Each wheel bearing has a built-in oil seal which allows gear oil to lubricate the bearing but prevents oil passage into the brake.

A seal in the front of the carrier bears against the pinion bearing nut to prevent differential gear oil from passing into the torque tube. An O-ring seal in a counterbore of the pinion nut seals the threads between the drive pinion and the pinion nut. See figure 6-2. 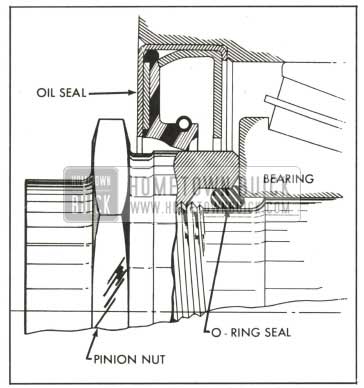 If a careful test of the car shows that the noise is not caused by external items as described in subparagraph a, it is then reasonable to assume that the noise is caused by the rear axle assembly. The 1959 Buick rear axle should be tested on a smooth level road to avoid road noise. It is not advisable to test rear axle for noise by running with rear wheels jacked up.

Noises in the 1959 Buick rear axle assembly may be caused by faulty propeller shaft or rear wheel bearings, faulty differential or pinion shaft bearings, dry or misaligned shaft splines, misalignment between two U-joints, differential side gears and pinions worn, or by a mismatched, improperly adjusted or scored ring and pinion gear set.

Objectionable vibrations at high speed (65 m.p.h. or higher) may be caused by a 1959 Buick propeller shaft that is out of balance. Out of balance may be due to a bent shaft. For the method used for insuring joint alignment, see figure 4-14 in paragraph 4-12.

To determine whether the propeller shaft is causing vibration, drive car through the speed range and note car speed at which vibration is most pronounced. Shift transmission into second gear (synchromesh) or low range (Twin Turbine) and drive car at same engine speed as when vibration was most pronounced in direct drive, and note the effect on vibration.

Even after the point of leakage has been determined, it is hard to tell whether the oil is leaking past the lip of the seal or past the OD of the seal. Therefore it is a good idea to make sure the leak is stopped by using a non hardening sealing compound around the OD of the new seal.