The advantage of this type of differential is that whenever power is applied to the rear axle, both axle shafts tend to lock to the differential case or, in effect, to each other. The greater the power applied to the rear axle, the more firmly the axle shafts are held to the case. This results in both rear wheels tending to revolve at the same speed regardless of their relative traction.

Although the primary purpose for the non-spin differential is to reduce the possibility of getting stuck under rugged driving conditions, a secondary advantage is that bumps do not adversely affect rear wheel action. During power application with a conventional differential, when one rear wheel hits a bump and bounces clear of the road, it spins free momentarily.

When this rapidly spinning wheel contacts the road again, the sudden shock may cause the car to swerve and is also hard on the complete drive train and tire. With a non-spin differential, the free wheel continues rotating at the same speed as the wheel on the road, thereby minimizing the shock and its resulting swerve.

The 1959 Buick Positive Traction (non-spin) differential has pinion shafts, pinion gears and side gears which operate in a similar manner to those in a conventional differential. Behind each side gear, however, is a side gear ring and a clutch pack whose function is to hold the side gears to the case under certain driving conditions. In order to provide. room to assemble these clutches the differential case is split into two halves (the ring gear flange half and the cover half) which bolt together.

The mechanism that actuates the clutches consists of four pinion gears positioned in the case or two cross shafts which are at right angles to each other. Both ends of the shafts have bevelled surfaces which mate with ramps in the case. See figure 6-37. 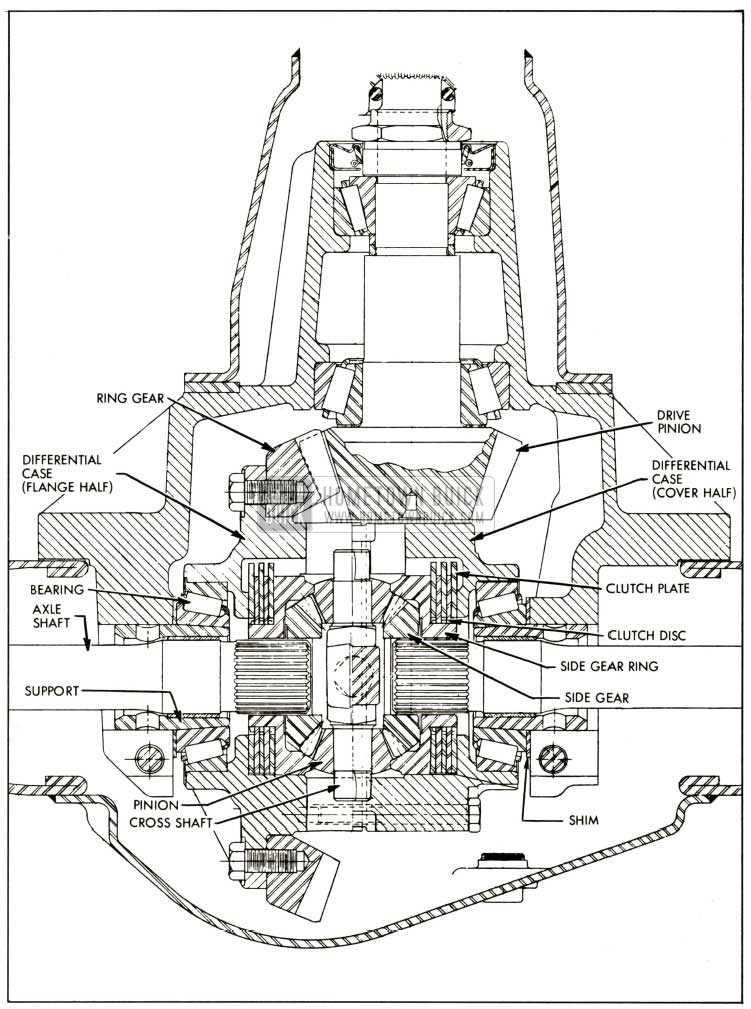 The path of driving force through the differential is from the case to the cross shafts to the pinion gears to the side gears to the axle shafts. Until force is applied to the differential case by the drive pinion and ring gear, the clutches are in a relaxed or neutral position. As soon as force is applied to the case, however, the resistance to turning of the rear wheels and axle shafts forces the cross shafts to slide up the ramps in the case and, at the same time, to move sideways in opposite directions. As the cross shafts move away from each other, they carry the pinion gears with them. Shoulders on the pinion gears bear against the side gear rings to apply the clutches and hold the axle shafts to the case. Thus, both rear wheels turn at the same speed as the case and driving force cannot be lost through spinning a wheel which has poor traction. Even though one wheel is on ice, the weight of the car on this wheel causes enough resistance to turning to engage the clutches.

When turning a sharp corner under normal conditions, the differential action is essentially the same as that of a conventional differential.

CAUTION: When working on a car with a 1959 Buick Positive Traction differential, never raise one rear wheel and run the engine with the transmission in gear. The driving force to the wheel on the floor may cause the car to move.

The lubricant level should be checked every 1000 miles. Maintain level at the filler plug opening by adding Special Lubricant Part No. 531536. Never use any lubricant other than this special lubricant, even for adding, or a severe clutch chatter may result when turning corners.

1959 Buick Positive Traction differentials can be easily identified either by an aluminum plate under the filler plug or by an X in a circle stamped on the bottom edge of the carrier housing flange. See figure 6-39. 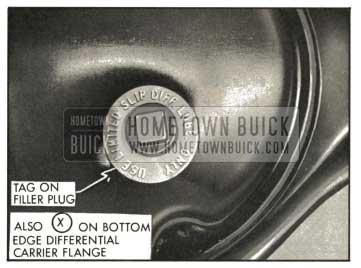 However, if the wrong lubricant is accidentally added, it will be necessary to completely clean out all lubricant and then fill with the special lubricant. Capacity of the rear axle housing is 6 1/2 pints. 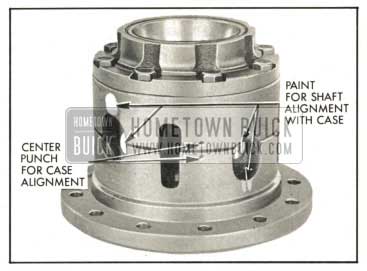 Replace any parts which are excessively scored, pitted or worn. 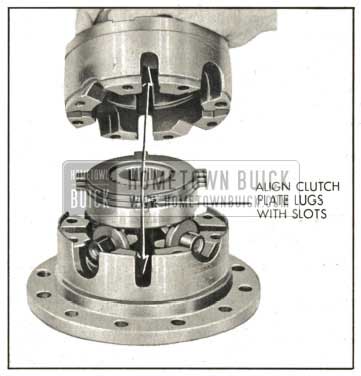 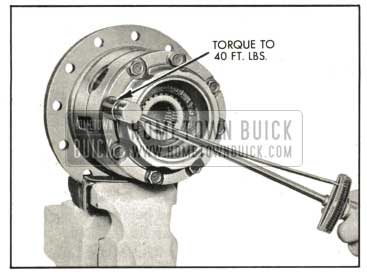 To assure proper operation of the clutches, both cross shafts must be free, but must not have more than .030″ clearance between the cross shafts and their ramps.

NOTE: It is not necessary that clearances of both cross shafts be equal as long as both clearances are within .004″ of each other. 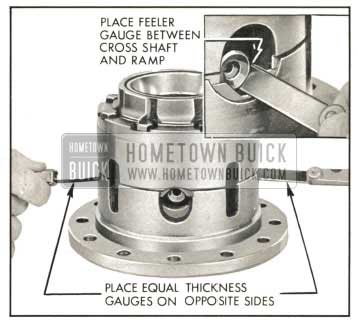 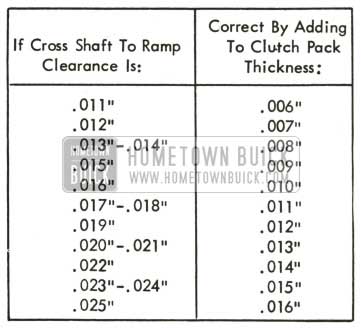 EXAMPLE: If two .019″ feeler gauges were required to take up the clearance at a cross shaft, .012″ added to the clutch pack thickness will reduce the cross shaft clearance to approximately .002″. 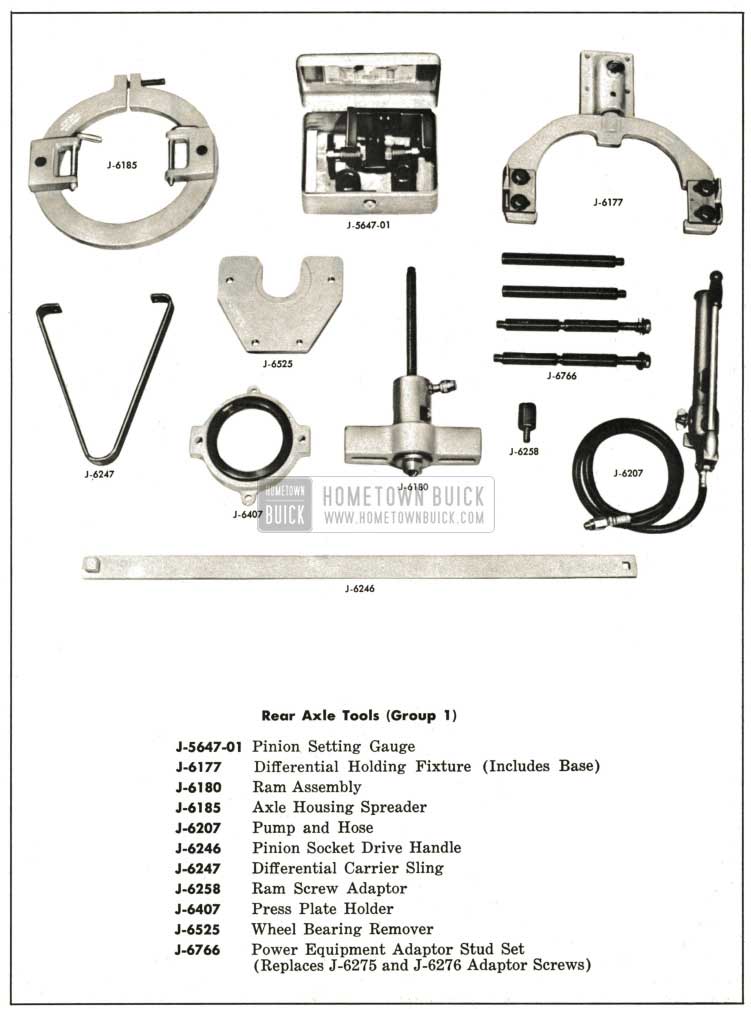 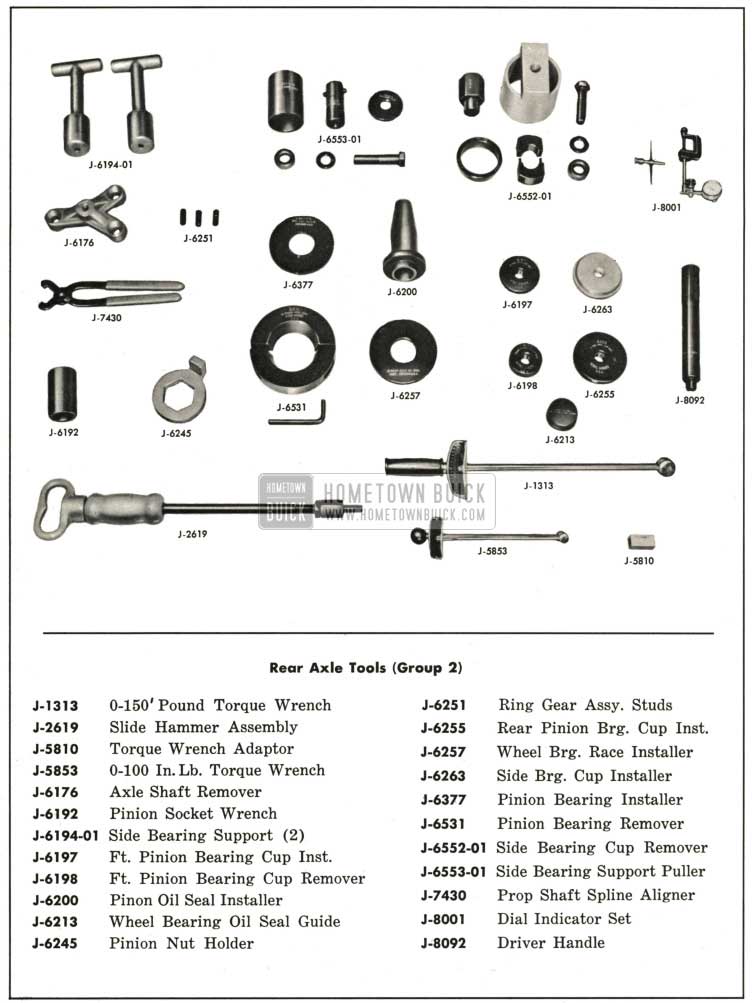