SECTION 10-I 1959 BUICK INSTRUMENTS AND CLOCK 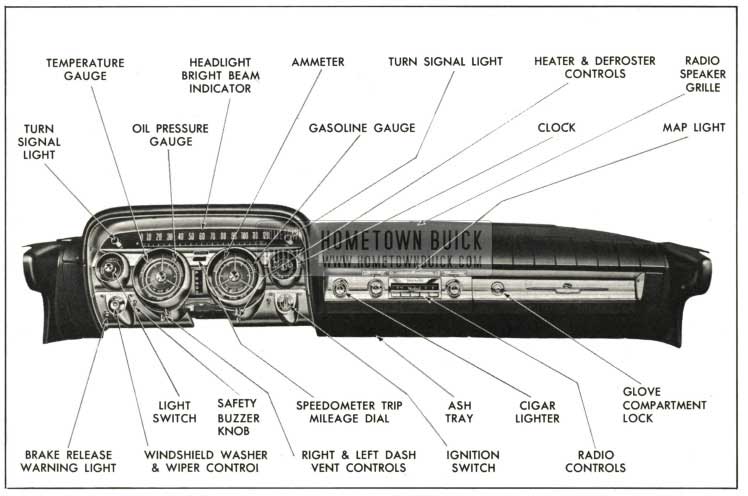 The AC charge indicator located in the 1959 Buick instrument cluster is similar to an ammeter; however, the scale is not graduated in amperes, therefore the indicator does not show the amount of , current flowing. The current required to move the pointer against the stop is 10 amperes. for both charge and discharge. The pointer is provided with a dampener, consisting of Silicone gell on the front pivot, to reduce pointer fluctuation when the voltage regulator is functioning.

The 1959 Buick charge indicator does not indicate charging rate of the generator since energy supplied by generator to electrical units other than the battery and horns does not pass through the indicator. At speeds above 30 MPH, with all lights and accessories turned on, the indicator should show a reading somewhere on the charge side, depending on the state of charge of the battery. Above 30 MPH, it should never show a discharge reading; if it does, the generator and regulator should be tested.

The AC temperature gauge, located in the 1959 Buick instrument panel, is not an electrical instrument. The heat indicator is a vapor pressure type which makes use of a sealed-in liquid, the expansion of which creates a pressure which moves the pointer on the gauge.

The temperature gauge is a unit assembly consisting of a pressure gauge connected by a capillary tube to a vapor bulb. The vapor bulb is attached by a plug to the rear corner of the engine left cylinder head so that it extends into the cooling water. The heat of the water causes the sealed-in liquid in bulb to expand in proportion to temperature and exert pressure on the gauge in 1959 Buick instrument cluster.

The AC oil pressure gauge is not an electrical instrument. The gauge is the pressure expansion type which makes use of pressure developed by the oil pump acting directy on the mechanism of the gauge in the 1959 Buick instrument cluster. The gauge is connected by a small pipe to the main oil passage in the crankcase near the distributor. Connected at this point, it registers the full pressure of the oil pump.

The 1959 Buick electric clock is mounted in the instrument panel at the right end of the 1959 Buick instrument cluster. The clock wiring circuit is protected by the “CLOCK” fuse on the fuse block under the cowl. The clock light is controlled by the rheostat in the lighting switch and is protected by the “INST. LTS.” fuse on the fuse block. When burned out, this bulb is accessible with the lower right instrument panel housing dropped down.

The 1959 Buick electric clock incorporates a sweep second hand and an automatic regulator:A reset knob extends through the glass just under the clock dial. To reset the time, pull the knob out and turn in either direction as required. See figure 10-77. 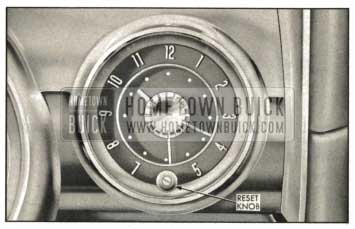 NOTE : The above procedure should also be followed when reconnecting the clock after it has been disconnected, or if it has stopped because of a blown fuse. Be sure to disconnect battery cable before installing a new fuse.

The dash unit pointer is moved by changing the magnetic pull of two coils in the unit. The magnetic pull is controlled by action of the tank unit which contains a yariable rheostat, the value of which varies with movement of a float and arm. The tank unit is mounted in the tank so that the float rises and falls on the surface of the gasoline near the middle of the tank. The float is adjusted to provide approximately 1 gallon reserve when the dash unit pointer is at the dot next to the “E” position.

If the 1959 Buick gasoline gauge does not operate properly, the dash unit, tank unit wiring, and tank unit should be separately tested to determine which is at fault. The units and wiring may be tested with AC Gas Gauge Tester, Type No. 1, available through AC distributors.

The 1959 Buick speedometer head has a long drum painted half red and half black on the diagonal so that as the drum revolves a red line moves horizontally across the dial face. See figure 10-78.

All speedometer heads are provided with a trip odometer and reset knob. Pushing the reset knob up and turning clockwise gives a quick reset; turning knob counterclockwise resets 1/10 mile at a time.

If the 1959 Buick speedometer installation appears to be noisy or the speed indicator wavers, inspect the cable casing for damage, sharp bends, or for being out of the supporting clips. If casing is in good condition and properly installed, remove cable for inspection and lubrication.

The 1959 Buick safety-buzzer is standard equipment on Series 4800 and is a factory installed option on all other series. This feature consists of a buzzer which may be adjusted by the driver to sound at any speed between 20 and 110 MPH by turning a knob on the lower instrument panel. The speed at which the safety-buzzer is set is indicated by a dial at the left side of the speedometer face.

The 1959 Buick safety-buzzer electrical circuit starts at a 5 ampere fuse marked “BK & BZ” located on the fuse block. Since this fuse also protects the parking brake warning light, a functioning warning light indicates that this fusg is OK. See figures 10-79 and 10-80. This circuit is “hot” whenever the ignition switch is turned on. From the fuse, a dark green wire carries the current to a buzzer mounted on the lower instrument panel tie bar. After passing through the buzzer contacts, a very small amount of current goes through a resistor to ground and the rest of the current passes through a second dark green wire to a connector on the speedometer case. See figure 10-79. 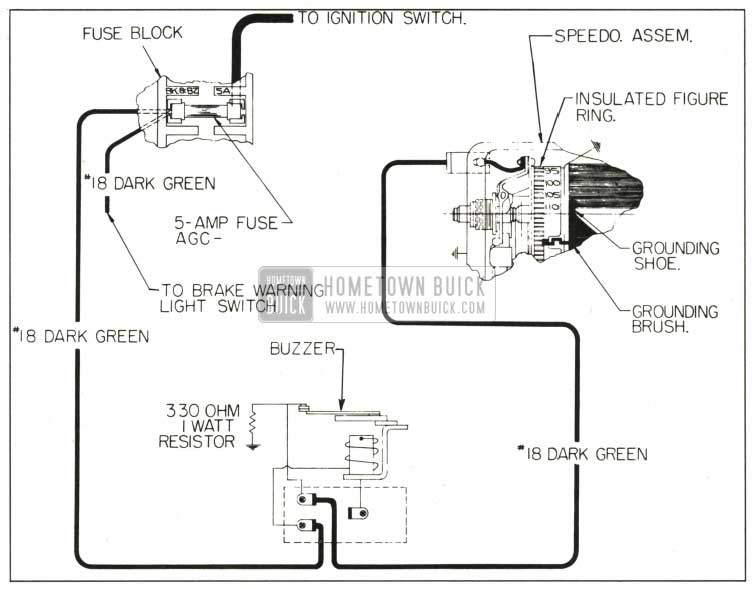 In the 1959 Buick speedometer, current is conducted to an insulated ring which has a dial reading from 20 to 110. A grounding brush projects from this insulated figure ring in such a position that a grounded plate on the speedometer cylinder will contact it as the cylinder rotates, thereby grounding the circuit and causing the buzzer to operate.

Buzzer Will Not Operate or Operates Intermittently

A defective speedometer assembly must be sent to the nearest UMS Service Station for repairs.