3-11 DESCRIPTION AND OPERATION OF TYPE HE FUEL PUMP

An AC Type HE fuel pump is used on all engines. The pump assembly is mounted on the right side of the timing chain cover in an inserted position, and the pump rocker arm is actuated by an eccentric mounted on front side of the camshaft sprocket.

The 1959 Buick fuel pump has a built-in air dome with a diaphragm to dampen out pulsations in the fuel stream. It is a diaphragm type pump and is actuated by the rocker arm through a link and a pull rod. See figure 3-13. 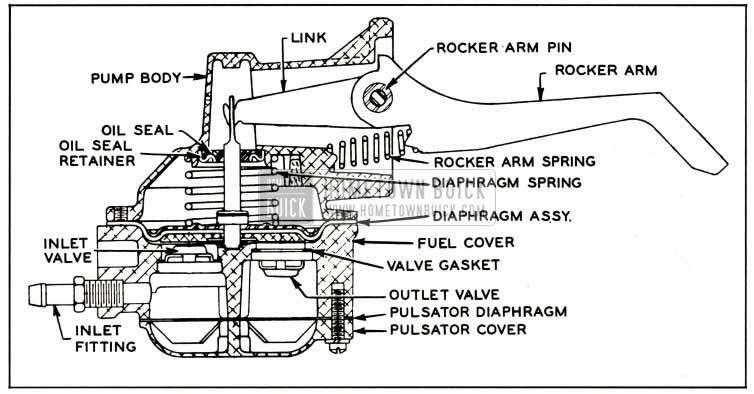 The 1959 Buick fuel pump draws gasoline from the tank and supplies it to the carburetor in sufficient quantity to meet engine requirements under all operating conditions. The principle parts of the fuel section are shown in figure 3-13.

The air dome with diaphragm in the bottom of 1959 Buick fuel pump provides a pocket in which fuel under pressure can compress a certain volume of air. When the pressure is relieved (pump on suction stroke) the pocket of compressed air pushes the fuel on to its destination. The air dome minimizes flow variations experienced with two-cycle pump stroke and increases the pump output.

If the 1959 Buick fuel pump is suspected of delivering an improper amount of fuel to the carburetor, it should be inspected and tested on the engine, as follows:

There are two service kits available: 1. The diaphragm kit consisting of diaphragm, valves, and oil seal. This kit is used for overhauling low mileage pumps. 2. The re pair kit consisting of all moving and wearing parts except the rocker arm. This kit is used for overhauling high mileage pumps. However, if a casting is damaged or the rocker arm is badly worn, it is advisable to replace the pump rather than attempt repairing it. 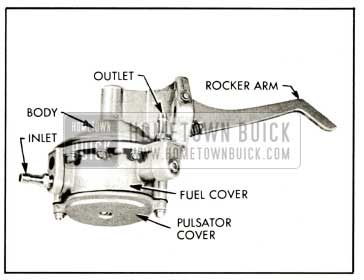 When overhauling 1959 Buick fuel pump, always use all new parts in kit as amount of wear of these parts cannot be determined visually. 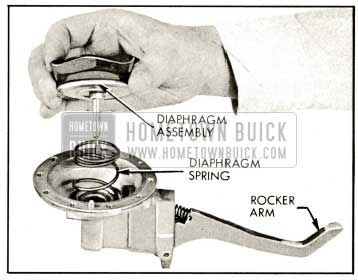 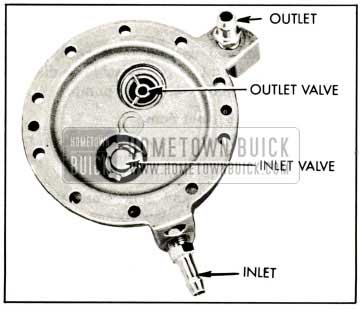