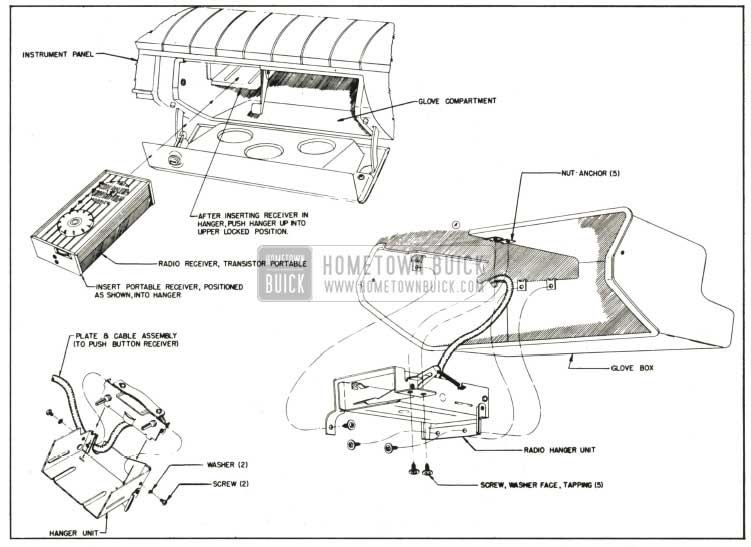 The 1959 Buick Transistor Portable radio is a 2 piece unit consisting of 1 unit permanently installed in the instrument panel, and a portable unit which plugs into a retractable rack in the glove compartment.

The permanently installed unit in the dash is not a complete radio, and will not function until the portable unit is installed in its carrying rack. When the 1959 Buick portable radio is installed, the permanent unit is connected to handle the circuitry to the car battery, antenna and speaker and to handle the tuning of the 1959 Buick radio while the portable unit assumes an assisting function. The permanent unit contains 2 additional transistors to boost performance and to give instantaneous sound delivery. 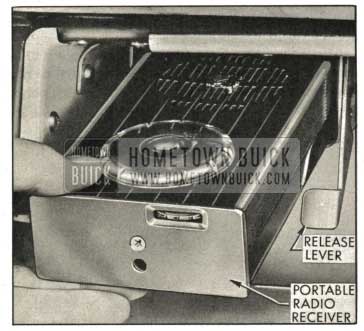 The portable unit, when removed from the glove compartment, is a complete radio within itself utilizing 6 separate transistors and 4 mercury cell batteries.

On the end of the portable unit is the On-Off switch and volume control while on the face of the unit is the manual controlled station selector.

The instrument panel portion or permanent unit of the receiver looks, and performs like the Sonomatic push-button rec iver, except that it plays the instant it is turned on. Since the portable unit can be locked in the glove compartment, out of sight, theft is discouraged.

The 1959 Buick Sonomatic and Wonderbar radio installation consists of a receiver with separate speaker mounted at the center of the instrument panel. All 3 radios use the sectional antenna mounted on left front fender, and suppression parts installed at various locations to eliminate interference. The 1959 Buick Wonderbar radio installation also includes a foot control switch mounted on the toe panel to left of the brake pedal.

The 1959 Buick Wonderbar, Sonomatic, and the Transistor Portable, when in the car, have five push buttons for push-tuning of five pre-selected stations. In addition to the push buttons, a control knob permits manual selection of other stations.

The 1959 Buick Wonderbar radio receiver also contains an automatic signal-seeking tuner by which the operator can change stations by merely depressing the single selector bar on the receiver, or the foot control switch on the toe panel. The seeking operation is a uni-directional sweep of the broadcast band from low to high frequency with instantaneous return. The tuning mechanism is driven by a spring loaded mechanical motor which is stopped on station by a triggering circuit actuated by voltage developed from an incoming signal. The number of stations on which the tuner will stop can be regulated by use of the sensitivity control knob on the receiver.

A manual antenna which must be extended and retracted by hand is standard equipment. An electrically operated antenna is available as optional equipment. In the latter antenna, a motor drives a nylon tape attached to the upper section of the antenna. A 3-position slide switch on lower edge of instrument panel roll controls the motor, which will run in either direction. Pushing the switch handle to the right raises the antenna and pushing handle to the left lowers the antenna. When the handle is released the switch returns to center “Off” position.

CAUTION: Never attempt to force an electric antenna up or down by hand. This will cause permanent damage to the operating mechanism.

Clockwise rotation of the switch knob, to left of dial, turns the 1959 Buick radio on, and further rotation increases the volume.

The 1959 Buick rear seat speaker may be optionally installed at the factory or by the dealer. On the 1959 Buick 4700 & 4800 series the assembly will be concealed beneath the package shelf and the bezel will be eliminated.

When 1959 Buick rear seat speaker is installed, a separate sliding speaker control is mounted on the under side of the upper instrument panel roll.

NOTE: To insure adequate sensitivity for selective tuning of the 1959 Buick Wonderbar radio it is be st to have antenna extended at least half way.

With the 1959 Buick radio turned on, selective tuning of available stations is accomplished by depressing either the selector bar above the dial (fig. 11-3), or the foot control switch on toe panel to left of the brake pedal.

When the 1959 Buick tuner reaches the right end of the dial it flies back to the left end and again starts moving to the right until it reaches a station having sufficient strength to stop it. By holding the selector bar or foot control switch down, unwanted stations or areas of the dial can be quickly passed over.

The number of stations on which the tuner will stop in selective tuning is regulated by manual setting of the sensitivity control knob, which is located behind the manual tuning knob to right of the dial. See figure 11-3. This is a step control having three positions. This control is in the circuit only while the tuner is seeking and does not affect the “on station” sensitivity of the receiver.

Turning the sensitivity control knob clockwise, in the direction marked “MORE,” increases the number of stations that can be received. Turning knob counterclockwise, in direction marked “LESS,” decreases the number of stations by eliminating those having weak signal strength in the area where car is located. In the extreme “LESS” position of control knob the tuner usually will stop on the strong local stations only.

If the 1959 Buick Wonderbar tuner is operated in certain localities or around buildings where a strong signal is not available, the tuner will automatically search the band from one end to the other without stopping. The sensitivity control knob should be turned clockwise to include more stations, and the antenna should be fully extended when this condition is encountered.

The instrument panel manual tuning knob is to right of the dial. See figure 11-3.

The 1959 Buick Transistor Portable model uses the instrument panel tuning controls when both units are connected, but the portable unit uses its own tuning dial when removed from the car.

To obtain the best reception with the portable unit removed from the car, rotate the unit until the reception is at its best.

When tuning manually, and particularly when setting up a station on one of the push buttons, careful adjustment of the tuning knob is essential to good radio reception.

On push button selection, if the program sounds screechy or distorted, it is probably caused by improper tuning and can be corrected by adjusting the tuning knob slightly. Since the low notes are apparently more affected by tuning than the high ones, it is a good plan to tune the set to a point where the low notes are heard best and high notes are clear but not screechy. This point may be most readily found by listening to the background noise and tuning for the lowest volume and pitch of this noise. Turning the control knob back and forth until the station is almost lost on either side will enable the operator to hear the difference in reception and select the intermediate position giving best results.

The trouble diagnosis information in this paragraph is of a non-technical nature. It is intended as an aid in locating minor faults which can be corrected without a specialized knowledge of 1959 Buick radio and without special 1959 Buick radio test equipment. If the suggestions given here do not affect a correction, further testing should be done only by a trained radio technician having proper test equipment.

1959 Buick Radio Is Inoperative or “Dead”

1959 Buick Electric Antenna Does Not Operate 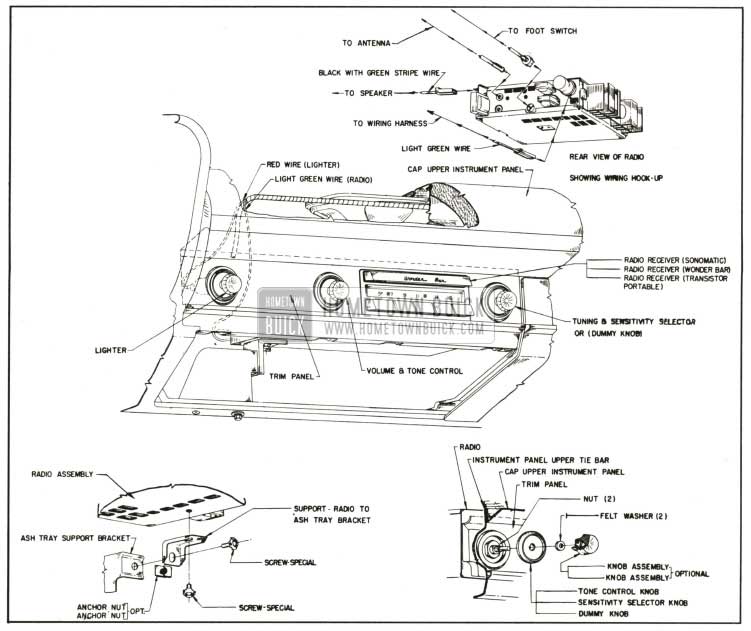 The built-in resistance of each spark plug wire approximates 4,000 ohms per foot.

In addition to the items mentioned above, bond straps are connected between the cowl and the rear corners of the engine.

11-4 DISASSEMBLY AND REINSTALLATION OF 1959 BUICK ANTENNA

Before removing 1959 Buick antenna from car, determine whether fault is in the antenna drive or in the switch. This is done as follows:

Also check the nylon teeth on the assembly for abnormal wear or breakage. Defective teeth are difficult to observe and careful inspection under a strong light is necessary. If any are found, replace the gear and pulley assembly.

If the motor does not rotate, the motor is defective and must be replaced.

Pull the motor and worm gear from the drive housing gently to avoid damage to the oil seal.

Disassembly of the Body Tube

If 1959 Buick radio reception is weak and a loose connection is determined to exist in the antenna, it will be necessary to remove the body and replace the antenna tube and nylon assembly in the following manner:

Connect the motor to a 12 volt D.C. power supply. Motor should rotate freely and draw about 4 amps. at 12 volts.

Assembly of the Body Tube 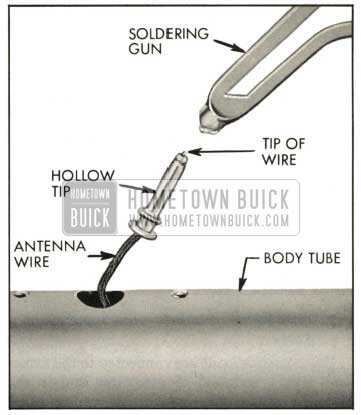 Feed in nylon through hole in drive housing and into drive pulley until about 1 1/4, turns of nylon are in the housing. See Figure 11-6 for proper routing of incoming nylon. 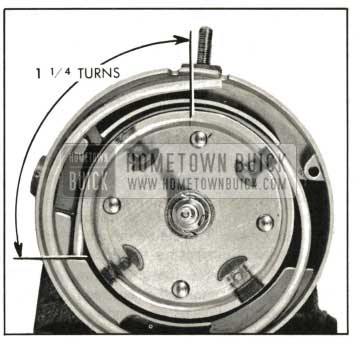 Assembly of the 1959 Buick Antenna Drive

See fig. 11-7 for correct location of parts necessary for reassembly. 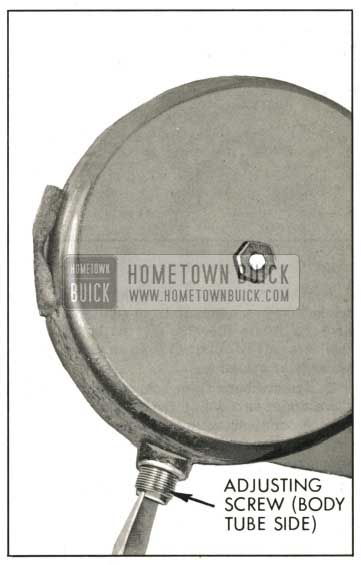 Figure 11-9 shows all the necessary details for the reinstallation of the 1959 Buick manual operated antenna. 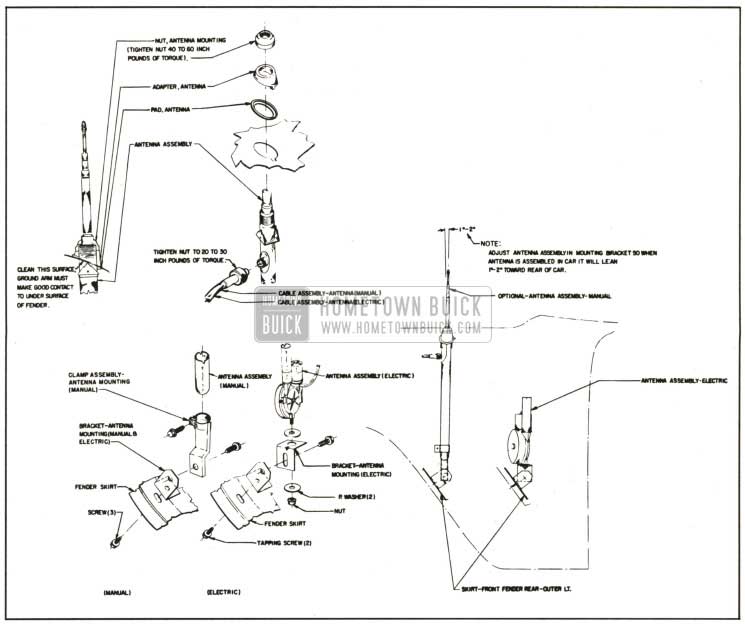 Figure 11-10 shows all necessary details for reinstalling the 1959 Buick electric motor driven antenna. The installation procedure is very similar to that described for manual antenna (Subpar. f) except for the following points. 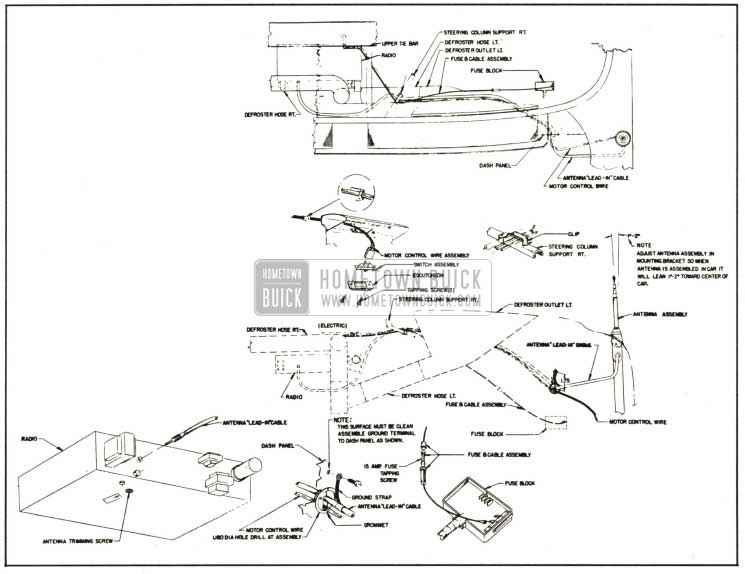 When making the adjustments covered in this paragraph it is essential to have the car in a location that is as free as possible from outside inter!erence.

An antenna trimmer adjustment is provided for matching the antenna coil in the receiver to the 1959 Buick antenna. This adjustment must always be made after installation of receiver and antenna, or after any repairs to these units. The adjustment should also be checked whenever the radio reception is unsatisfactory.

1959 Buick rear seat speakers may be installed on sedans by either the factory or by the dealers. A separate speaker may be mounted on the shelf behind the rear seat, or as on the Model 4867 it can be mounted in the notch of the rear seat back cushion.

A slider speaker control is used to vary the volume of each 1959 Buick speaker. When the control is moved, 1 speaker gradually fades out, while the other speaker becomes louder. At the extremes only 1 speaker can be heard. At midpoint both speakers can be heard equally.

The recommended procedure for installation is given below: For any questions concerning the installation procedure in the front part of the car, see fig. 11-11. 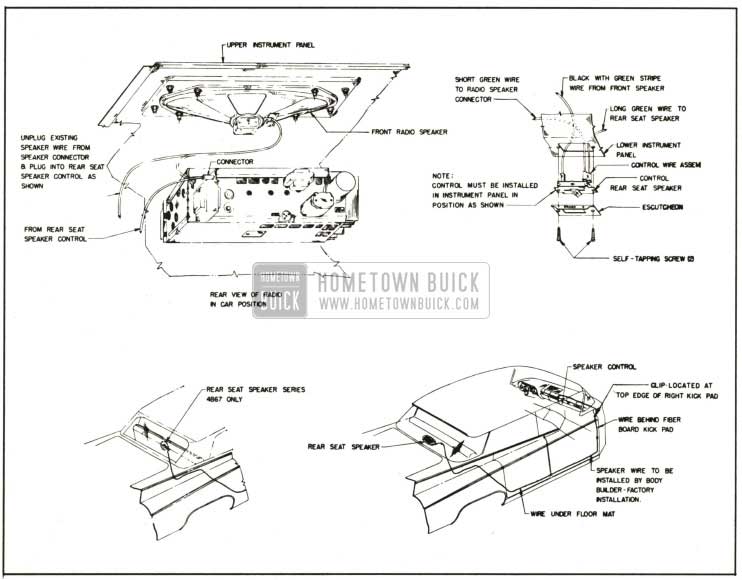 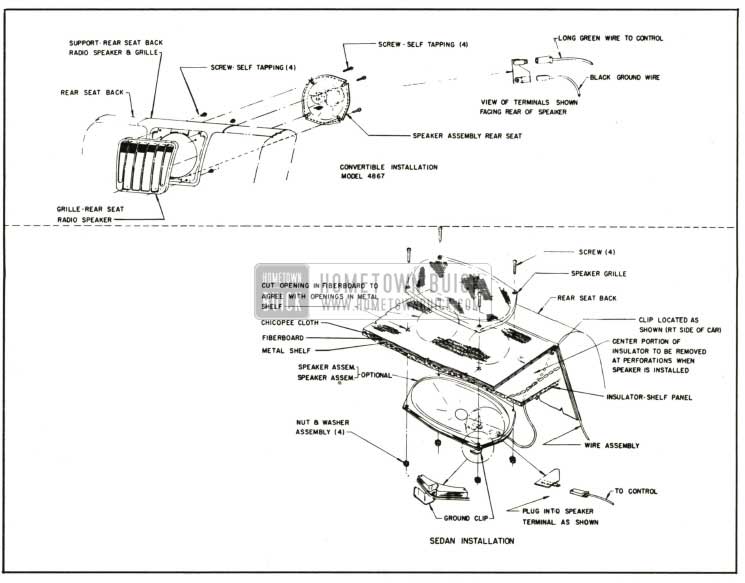 To help with the servicing of 1959 Buick radios the schematics of each are shown in this section. 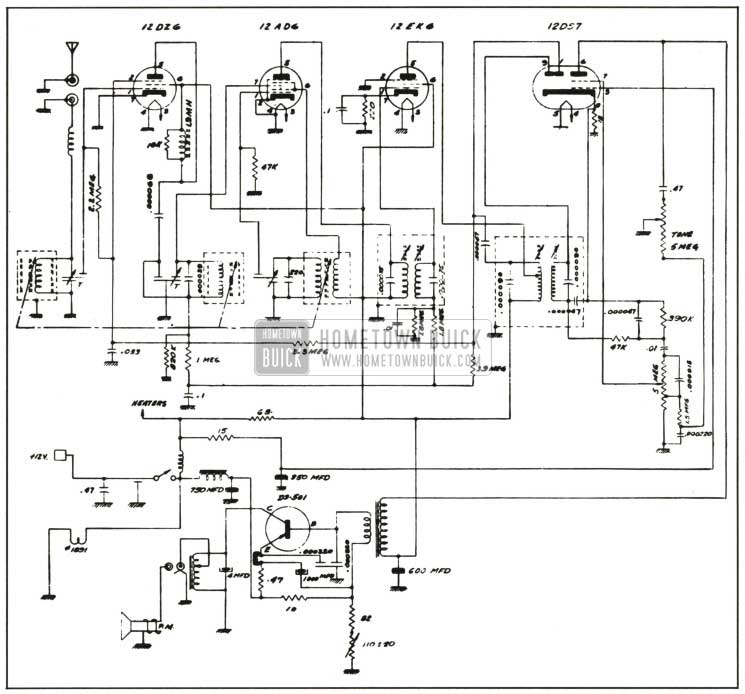 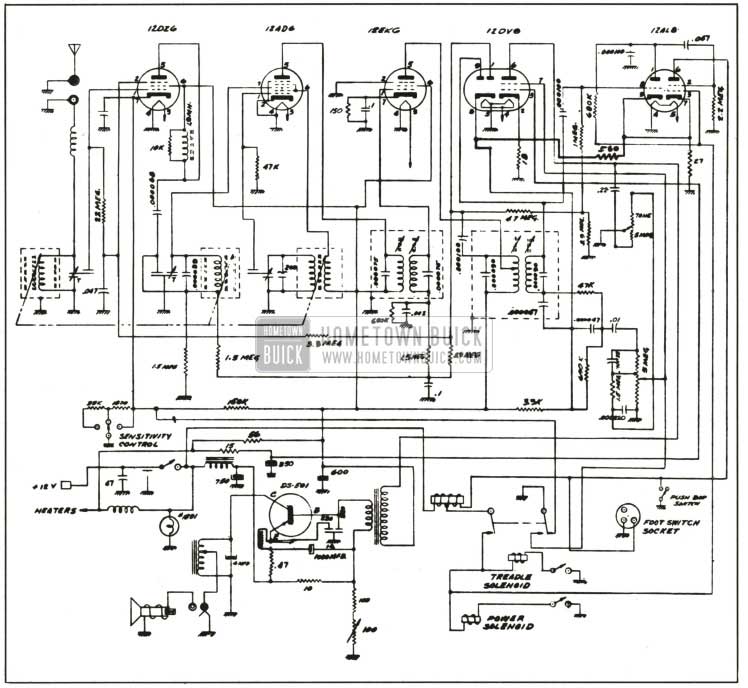 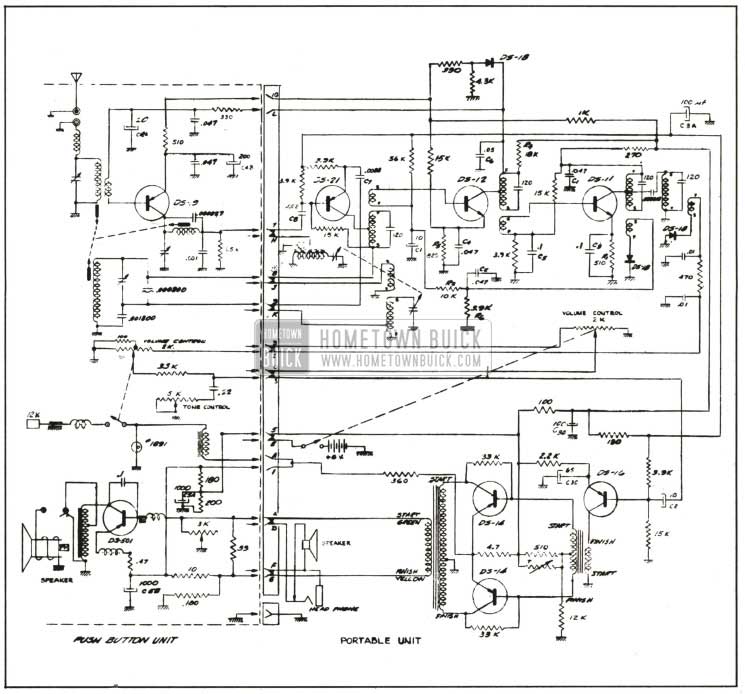