Use a reliable torque wrench to tighten the parts listed, to insure proper tightness without straining or distorting parts. These 1959 Buick chassis suspension specifications are for clean and lightly lubricated threads only; dry or dirty threads produce increased friction which prevents accurate measurement of tightness.

NOTE : Dimensions and limits given in these specifications apply to new parts only. Where limits are given, “T” means tight and “L” means loose.

The 1959 Buick front wheel suspension allows each front wheel to rise and fall, due to change in road surface level, without appreciably affecting the opposite wheel.

Each 1959 Buick wheel is independently connected to the frame front cross member by a steering knuckle, ball and socket assemblies, and upper and lower control arm assemblies. See figure 7-1. 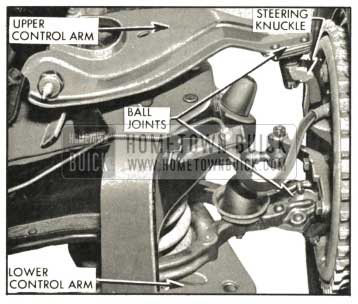 The upper and lower arms are so placed and proportioned in length that they allow each knuckle, and wheel to move through a vertical arc only. The front wheels are held in proper relation to each other for steering by means of two tie rods which connect to steering arms on the steering knuckles and to the intermediate rod.

A coil type chassis spring is mounted between the frame front cross member and a spring seat in each lower control arm assembly.

Side roll of the front end of chassis (on Air Ride jobs and estate wagons) is controlled by a spring steel stabilizer shaft. The shaft is mounted in rubber bushings supported in brackets attached to lower flange of each frame side rail. The ends of stabilizer shaft are connected to the front sides of lower spring seats by links which have rubber grommets at both ends to provide flexibility at the connections and prevent rattle. See figure 7-7. 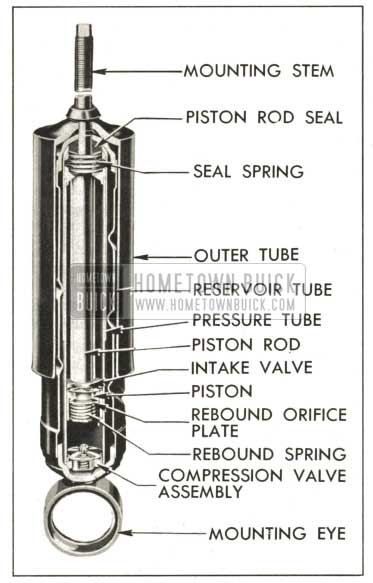 The 1959 Buick shock absorber consists of two concentric tubes, a piston and rod, and valves for controlling hydraulic resistance. The rear shock absorber has an additional tube which acts as a stone shield.

The pressure (inner) tube provides a cylinder in which the piston and rod operate. The upper end is sealed by a piston rod seal, and the lower end is closed by the compression valve assembly. This tube is completely filled with fluid at all times. The reservoir tube provides space for reserve fluid and for overflow from the pressure tube during operation.

The piston, piston rod and outer tube are attached to the car frame, while the pressure and reservoir tubes are attached as a unit to the chassis suspension through the lower mounting. As the wheel moves up and down with respect to the frame the 1959 Buick chassis spring compresses or expands, and the shock absorber is telescoped or extended. This action forces the fluid to move between the pressure and reservoir tubes through small restricting orifices in the valves. The relative slowness of fluid movement imposes restraint on the telescoping or extension of the shock absorber, thus providing the required dampening effect on spring action.