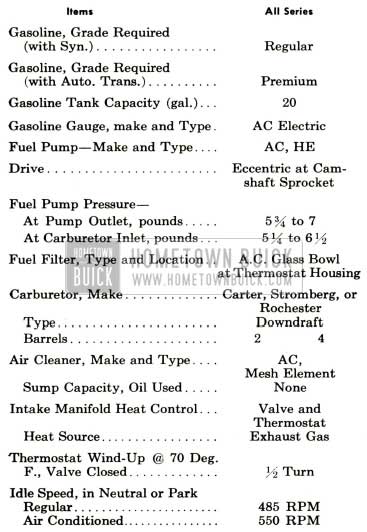 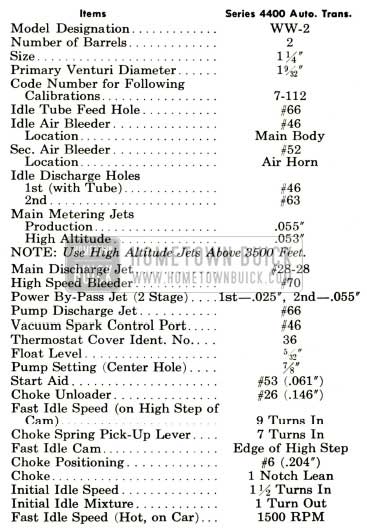 IMPORTANT: Calibrations are governed by the CODE number. 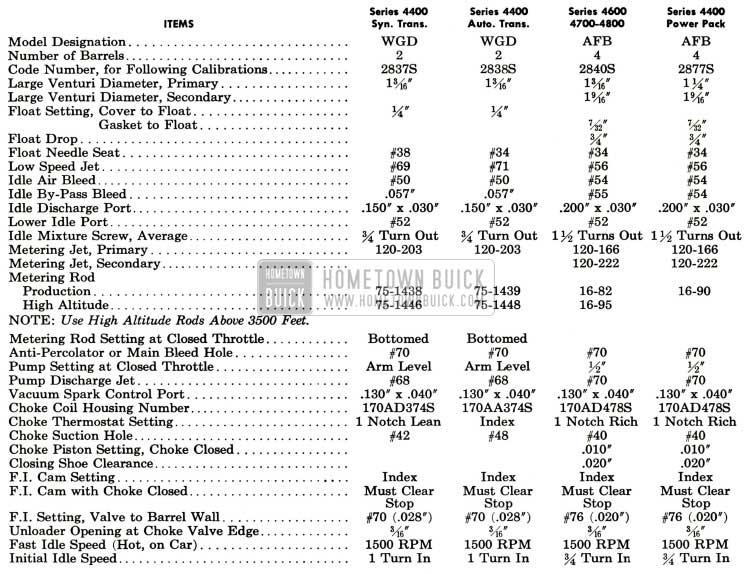 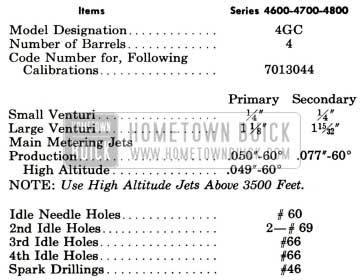 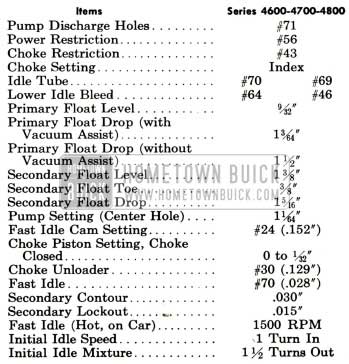 The 1959 Buick gasoline tank is attached by two strap type supports to the body under the trunk compartment, where it is seated in saddles. Two internal baffles spot-welded to the upper half at centerline of tank support seats act as struts to maintain the shape of tank and prevent flexing due to weight of gasoline and pull of the supporting straps.

The 1959 Buick gas tank filler is soldered into an opening at the rear upper center of the tank, and is accessible by lifting the license plate holder. The tank is vented at a special pipe rather than at the filler cap. This breather pipe is located at the forward top center of the tank and has a rubber hose extending from it up into the area just under the rear spring cross member. See figure 3-1. 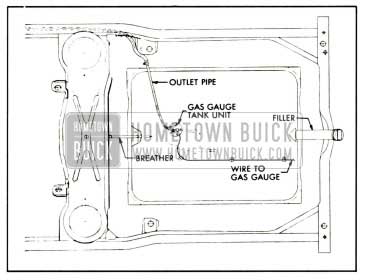 The tank outlet is located at the top center of the tank. It consists of a combination feed pipe and gas gauge tank unit. See figure 3-2. 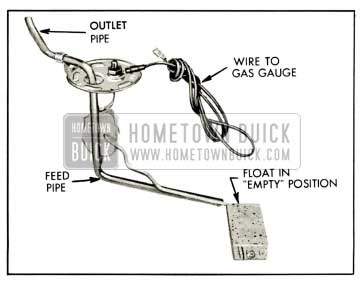 All 1959 Buick fuel lines are made of synthetic rubber hose. This hose is supported along the inside of the right frame rail by clips. All connections are made to non-corrosive fittings using wire hose clamps. See figure 3-3. 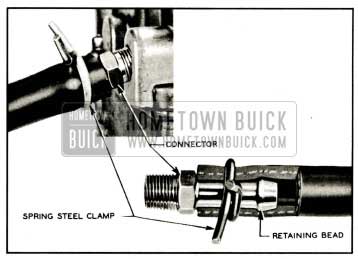 A glass bowl fuel filter is located in the line between the 1959 Buick fuel pump and the carburetor. In this location, the filter can be visually inspected or cleaned without removing the air cleaner.

On air conditioner equipped cars built in the Arlington and Kansas City plants only, a vapor by-pass system is installed. These cars have a special fuel filter which has a metering outlet in the top. All vapor which forms is bled off and returned to the gas tank through a rubber hose along the left frame side rail. This system greatly reduces any possibility of vapor lock.

The 1959 Buick fuel pump is mounted on the lower right side of the timing chain cover. It is actuated by a hardened, chrome-plated, stamped steel eccentric mounted on the front side of the camshaft sprocket. The pump is inverted, thereby placing it in a lower, cooler location. It has a built in air dome with a diaphragm to dampen out pulsations in the fuel stream. The construction and operation of the pump are described in Section 3-D.

All series engines are equipped with oil wetted mesh element air cleaners combined with intake silencers. The 1959 Buick air cleaner removes abrasive dust and dirt from the air before it enters the engine through the carburetor. The intake silencer reduces to a very low level the roaring noise made by the air as it is drawn through the intake system. The 1959 Buick cleaner and silencer also functions as a flame arrester in event of “backfire” through the intake system. 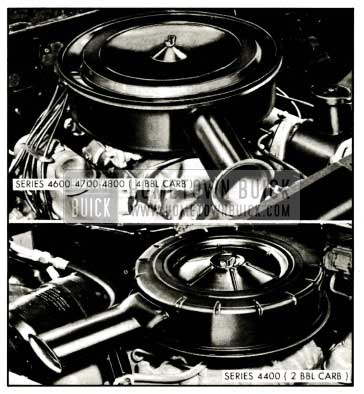 All four barrel carburetor air cleaners have two locating tabs which engage two projections on the carburetor air horn to locate the large air inlet tube firmly in position about 15° to the right of the center line of the engine. The small pipe on air ride air cleaners conducts air from just above the carburetor through a hose to the inlet of the air compressor. This not only insures a clean air supply, but also eliminates compressor inlet noise.

The 1959 Buick air cleaner is of the washable mesh type. It consists of a cylinder of aluminum mesh retained by an inner and outer cylinder of perforated sheet metal. The mesh also acts as a flame arrester in case of a backfire.

The oil-wetted mesh element passes air through with low restriction, but dust or dirt in the air deposits on the mesh. For normal operating conditions, the element should be cleaned every 5000 miles (more often under dusty operating conditions). See paragraph 1-2 step 2 for the cleaning procedure.

NOTE: For extremely dusty operating conditions, it may be advisable to install the interchangeable heavy duty dry element.

The 1959 Buick carburetor throttle control linkage is designed to provide positive control of the throttle valves through their entire range without being affected by movement of the engine on its rubber mountings. The linkage also serves to operate the carburetor starter switch when cranking the engine. See figure 3-11.

The 1959 Buick accelerator pedal is mounted on two ball studs which are fastened in the floor pan. Depressing the accelerator pedal causes the pedal to make a sliding contact with the rear end of the accelerator rod, forcing the rod to pivot forward and down. The rod pivots in an equalizer link which extends between a pivot pin on the body cowl and a contact button on the rear of the engine. See figure 3-11.

The return spring returns the throttle linkage to idle position and also holds the lower end of the equalizer link in contact with the rear of the engine at all times. See figure 3-11.

On cars equipped with an automatic transmission, a dash pot is mounted in position to be contacted by an arm of the carburetor throttle lever as the throttle is closed. The dash pot cushions the closing of throttle valves to prevent sudden shut off which might cause the engine to stall when the accelerator pedal is suddenly released. The throttle linkage also actuates a separate lever and rod connected to the stator control valve in the transmission.

A low-restriction, dual (2 section) intake manifold is bolted to the inner edges of both cylinder heads, where it connects with all inlet ports. The end branches of each section run at 90 degrees to the connecting middle branch, thereby forming a T-junction at the dividing point which assures a uniform division and distribution of fuel to all cylinder inlets. Each 1959 Buick manifold section feeds four cylinders-two in each bank. See figure 3-5. 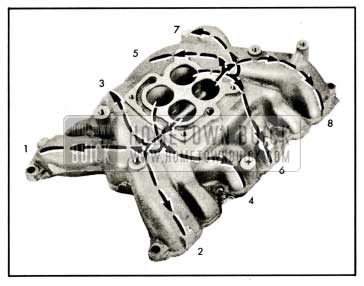 The 1959 Buick intake manifold is heated and hot spots are provided at the T-junction dividing points by crossover chambers cast along the outer walls of each end branch. These chambers connect to the two middle exhaust passages in each 1959 Buick cylinder head. See figure 3-6. Hot spots located at the dividing junctions aid in vaporizing the heavier particles of fuel which are swept against the outer walls due to their greater momentum. The heated intake manifold also aids in obtaining a uniform fuel distribution. 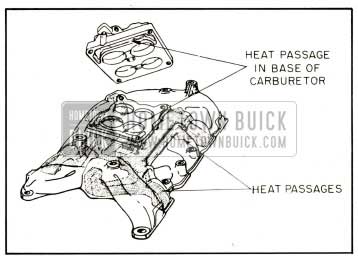 The 1959 Buick intake manifold is heated by exhaust gas cross-over passages cast under the center section of the manifold. These passages connect to the two middle exhaust passages in each cylinder head. See figure 3-6. Exhaust heat is supplied directly to the carburetor mounting surface by two holes drilled from the mounting surface into the cross-over passages. The carburetors are designed to conduct this heat around the throttle valve area to reduce engine stalling due to carburetor icing.

A heat control valve with a bi-metal thermostat is located in the right exhaust manifold. See figure 3-7. 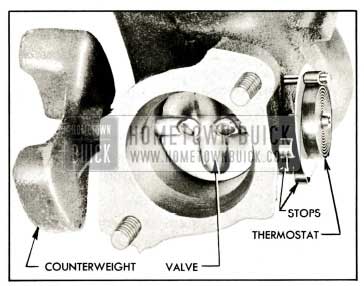 Each cylinder exhausts through an individual port into a separate branch of the exhaust manifold. This manifold, referred to as the double “Y” type, is designed to provide a separation of 270 degrees crankshaft rotation between any two exhaust impulses in one branch of the manifold. This elimination of overlap within any given branch of the manifold permits valve timing that. improves engine efficiency, minimizes exhaust valve burning, and effects more complete scavanging of exhaust gas from the cylinder.

The 1959 Buick mufflers are the oval-shaped, dynamic flow type having very low back pressure. It is double wrapped of heavy gauge sheet steel with a layer of asbestos placed between wrappings to aid in reduction of noise transfer and prevents any “oil-canning” effect. The mufflers are supported by free hanging, rubber-fabric mountings which permit free movement but eliminate transfer of noise and vibration into the passenger compartment.