Both lighting switches are “push-pull” types operated by a knob marked “LIGHTS”. Three “push-pull” positions of the switch knob provide control of the lights as follows:

The thermo circuit breaker consists of a bi­metal blade and set of contact points connected in series with the lighting circuits. An abnormal flow of current through the circuit breaker, such as would be caused by a short circuit in a lighting circuit, heats the bi-metal blade sufficiently to separate the points and cause them to vibrate. The vibrating blade alternately opens and closes the circuit, thus reducing the flow of current and protecting the wiring against overheating and burning. The flickering light produced by the vibrating circuit breaker serves as a warning to the operator of vehicle that a short circuit exists.

If the lighting switch is suspected of being faulty, the contacts can be tested by connecting a short jumper wire between No.1 terminal and the other terminals while observing any change in the brilliance of lights affected.

If no change in brilliance of 1950 Buick lights is noted the switch contacts are satisfactory and the cause is in the wiring circuit connections or lamp bulb. If switch is faulty it must be replaced since internal repairs cannot be made. 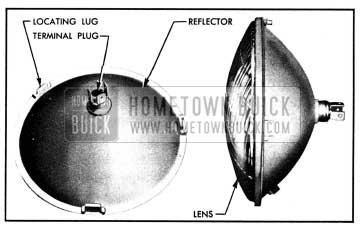 The lamp filaments are located with respect to the reflector so that two separate and distinct headlight beams may be obtained, depending upon which filament is burning. 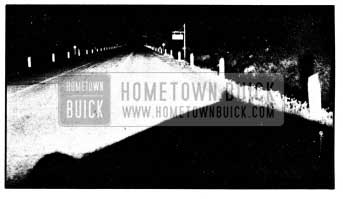 When the upper lamp filament is burning, a lower or depressed light beam is obtained. The lower beam is designed so that it does not throw a dazzling light into the eyes of an approaching driver. At the same time, the distribution of light is such that the right side of road is illuminated as far ahead as is practicable without causing glare on curves. See figure 10-85. 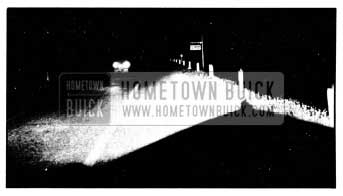 The lower beam is intended for use in traffic and on the highway when meeting other vehicles.

The dimmer switch opens and closes the circuits to the upper and lower lamp filaments in both sealed beam units, thereby alternately raising and lowering the headlight beams with each sucessive operation of the switch. Depression of switch button turns the rotary contacts one position within the switch. The spring-loaded button automatically returns to the reset position when released. The switch contacts overlap so that the new circuit is closed before the previous one is opened, in order to prevent both beams being off at the same time during operation of the switch.

When a sealed beam unit is burned out or broken it must be replaced as a unit assembly. Two types of sealed beam units are available. In one type, the glass lens and a glass reflector are fused together. In the other type, the glass lens and a metal reflector are assembled together with a gasket to provide a tight seal. Both types are interchangeable. See figure 10-83. 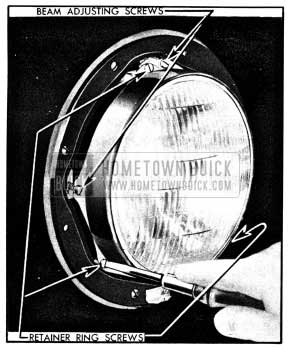 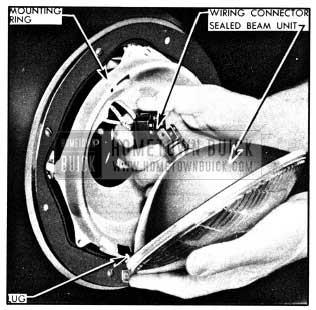 Before installation of headlamp door, adjust headlamp for proper aim as described below.

The headlamps must be properly aimed in order to obtain the maximum road illumination and safety that has been built into the head lighting equipment. The headlamps must be checked for proper aim whenever a sealed beam unit is replaced and after any adjustment or repairs of the front end sheet metal assembly.

Headlamp aiming machines are in general use.

When using one of these machines make certain that it is in proper condition, and carefully follow the instructions of the manufacturer. Headlamp aiming charts are also available and will give good results if used properly; see subparagraph c below.

Regardless of method used for checking headlamp aim, car must be at curb weight, that is, with gas, oil, water, and spare tire, but no passengers. Tires must be uniformly inflated to specified pressure (par. 6-8). If car will regularly carry an unusual load in rear compartment, or a trailer, these loads should be on car when headlamps are checked. Some states have special requirements for headlamp aiming adjustment and these requirements should be known and observed. 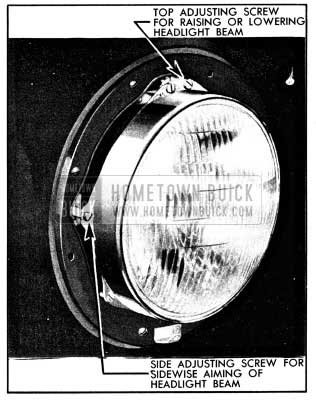 Use of 1950 Buick Headlamp Aiming Chart 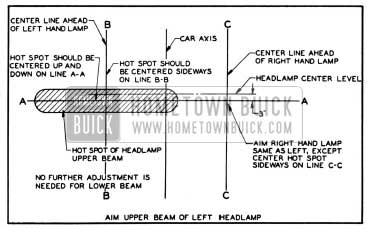 When using the headlamp aiming chart, place car on a level stretch with chart placed 25 feet ahead of both headlamp lenses, . and parallel to them. Place a narrow piece of masking tape on the exact vertical centerline of the back window glass. Shift chart sideways as required to bring the center vertical line into exact alignment with the center of radiator ornament and center of the back window glass.

The small lamps mounted in the front bumper guards are combination parking and direction signal lamps. Each lamp contains one 21-3 CP lamp bulb which may be replaced by removing the lamp door. The pins on bulb and slots in of 21 CP and 3 CP filaments when installing a new bulb.

When the direction signal switch is operated, the 21 CP filament flashes on and off in the lamp on the side of the car for which a turn is indicated. This circuit is independent of the lighting switch and is protected by a fuse mounted on fuse block under the cowl.

When the direction signal switch is operated, the separate 21 CP lamp bulb flashes on and off on the side of car for which a turn is indicated; the bulb in lamp on opposite side of car does not light.

Lamp bulbs may be replaced by removing the tail lamp door which is retained by two screws. The pins on the 21-3 CP bulb and slots in socket are offset to prevent reversing position of 21 CP and 3 CP filaments when installing a new bulb.

When installing a lens be sure that drain notch is at the bottom; top of lens is marked “TOP.” When reinstalling lamp door be sure that gasket is in proper position to seal door. See figure 10-90. 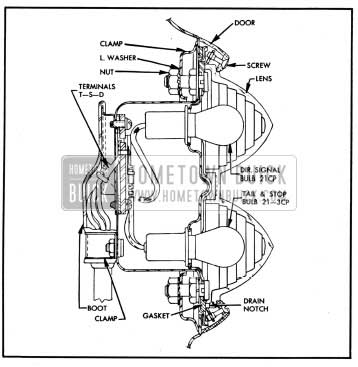 Each lamp assembly is attached to the fender by a clamp and two nuts with external-tooth lockwashers. The wires are connected to three terminals on lamp body marked “T”, “S”, and “D” which are self-explanatory. These terminals are protected by a boot which snaps over a flange on lamp body and is further retained by a clamp. See figure 10-90.

The rear license lamp is mounted in a protected position in the rear bumper guard upper rail, above the license plate. It contains one 3 CP lamp bulb which operates in conjunction with the tail lights and the circuit is protected by the circuit breaker on lighting switch. To replace lamp bulb, remove two coin slotted sleeve nuts which attach the lamp socket and wire assembly.

The Series 40 instrument panel light switch can be removed from the radio grille by removing the knob and the mounting nut. Loosen set screw on underneath side of knob, using a 3/32″ Allen wrench, then pull knob out. Use Wrench J 1589 to remove switch mounting nut, then remove switch and disconnect wires.

On later Series 40 and all Series 50-70, two map lights are located in the radio speaker grille adjacent to the ash trays. Each map light consists of a 2 CP lamp bulb mounted on forward side of the grille in position to project light downward through an opening in grille. Both lights are controlled by the lighting switch as described in paragraph 10-53.

To replace the bulb in a Series 40-50-70 map light remove the adjacent ash tray to obtain access to the bulb holder. Place a small screwdriver behind the tab of bulb holder and move holder toward center of ash tray opening until it snaps into the full “out” position. After replacing the bulb, slightly press in on bulb holder and push it back into position, then install ash tray.

On first Series 40, a map light and switch assembly is mounted in the lower left corner of the radio speaker grille. The switch makes contact to turn on the light when the “map light” knob is pulled out. The map light circuit is protected by the thermo circuit breaker on the lighting switch.

The switch knob may be removed for replacement of lamp bulb by firmly pulling it farther out from the “light on” position. When the knob is installed, align the key on knob with the slot in knob sleeve. The switch assembly is attached by a special nut which may be removed with Wrench J 1588, after removal of switch knob. See figure 10-91. 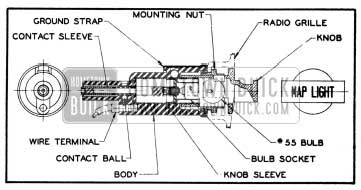 The instrument panel compartment (glove box) is lighted by a 2 CP lamp bulb mounted in a light switch attached to top edge of the compartment. The spring-loaded switch makes contact when the compartment door is opened. As the door is closed it depresses the switch button to break contact and turn the light off. This circuit is protected by the 30 ampere “Dome” fuse on the fuse block under cowl. 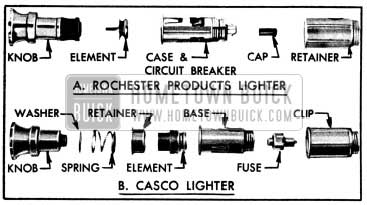 Both type lighters are heated by pressing the knob in until it latches; the knob will automatically unlatch and return to “off” position when heated to proper temperature.