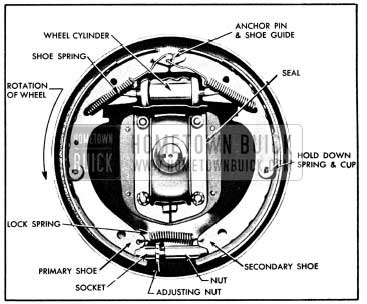 The 1950 Buick brake assembly at each wheel uses a primary (front) and a secondary (rear) brake shoe of welded steel construction with molded lining attached by tubular rivets.

A hydraulic brake wheel cylinder (fig. 8-3), which is mounted on brake backing plate between upper ends of brake shoes, expands the brake shoes in each brake assembly during application of the service brakes. During application of parking brakes, a strut and brake lever expands the brake shoes in each rear brake assembly only. The upper end of brake lever is pivoted to the web of the secondary shoe, the strut connects brake lever to the primary shoe, and the rear brake cable is attached to lower end of brake lever. The coil springs which connect brake shoes to the anchor pin retract the shoes when either the service or parking brakes are released. See figure 8-11.

Each wheel cylinder contains two pistons and two rubber cups which are held in contact with the pistons by a central coil spring to provide a fluid-tight seal. The inlet port for 1950 Buick brake fluid is located between the pistons so that when fluid pressure is applied both pistons move outward toward the ends of wheel cylinder. The pistons impart movement to the brake shoes by means of connecting links which seat in pistons and bear against webs of shoes. Rubber boots enclose both ends of cylinder to exclude foreign matter. A valve for bleeding the brake pipes and wheel cylinder is located above the inlet port. See figure 8-3.

The 1950 Buick master cylinder performs three functions. (1) It maintains a constant volume of fluid in the hydraulic system at all times, regardless of expansion due to heat or contraction due to cold. (2) It transmits the pressure of the brake pedal equally to the wheel cylinders (and 1950 Buick brake shoes) at all wheels through fluid pressure built up in its cylinders. (3) It acts as a pump during bleeding of the hydraulic system.

The master cylinder is mounted on the inside of left front frame side rail and is operated by the 1950 Buick brake pedal through an adjustable push rod. See figure 8-2. 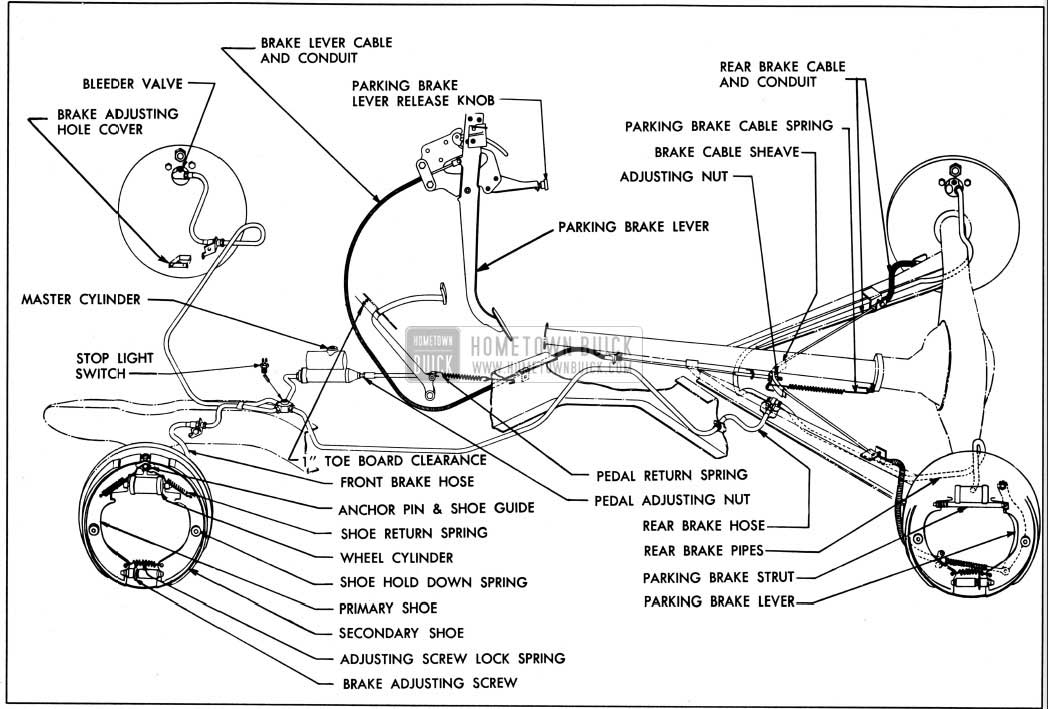 The master cylinder body (A) consists of a fluid reservoir cast integral with a cylinder barrel (S) which is machined to house the working parts. See figure 8-4. 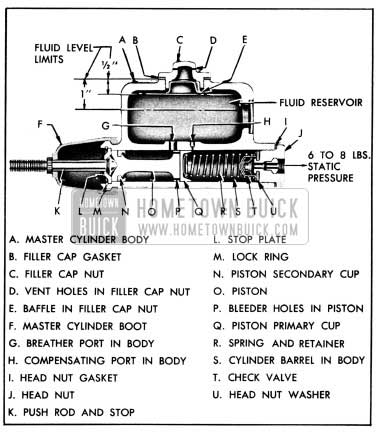 A breather port (G) and a compensating port (H) permit passage of fluid between reservoir and cylinder barrel under certain operating conditions. The reservoir is closed at the top by a gasket (B) and a vented filler cap nut (C) containing a baffle (E) to prevent loss of fluid through the vent holes (D).

The 1950 Buick parking brake mechanism consists of a foot operated lever and cables which operate the rear wheel brake shoes only. The parking brake lever located on left side of body cowl, will automatically lock to hold parking brakes applied when the lever is pushed forward. The brakes are released by pulling the release knob on the parking lever.

When Brakes are Released

When the 1950 Buick brake pedal is in fully released position the master cylinder piston (O) is held against the stop plate (L) by the coil spring (R) which also holds the check valve (T) against the rubber washer (U) on head nut (J) with sufficient pressure to maintain 8 to 16 pounds static pressure in brake pipes and wheel cylinders. With piston against stop plate the compensating port (H) is not covered by the piston primary cup (Q) and the breather port (G) is also open, so that the cylinder barrel (S) is completely filled with fluid from the reservoir. See figure 8-4.

When the 1950 Buick brake pedal is depressed to apply service brakes, the push rod (K) forces the master cylinder piston ( 0) and primary cup (Q) toward the head nut (J). As soon as the primary cup covers the compensating port (H), pressure is built up in the cylinder barrel (S) and fluid is forced through holes in the check valve (T) into the pipes leading to all wheel cylinders. See figure 8-4.

The 1950 Buick brake fluid enters each of the wheel cylinders (fig. 8-3) causing the cylinder pistons and connecting links to move outward and force the 1950 Buick brake shoes into contact with the drums. This part of the brake action is accomplished with very light pressure on the pedal. Since the pressure must be equal in all parts of the hydraulic system, no braking action can take place until all of the shoes are in contact with the drums; therefore, the system is self-equalizing. As pressure on 1950 Buick brake pedal is increased, greater hydraulic pressure is built up within the master cylinder barrel and wheel cylinders, and consequently greater force is exerted against all 1950 Buick brake shoes.

As the 1950 Buick brake shoes come in contact with the drums, on forward motion, the energy of the turning drums is imparted to the primary shoes which then actuate the secondary shoes so that all shoes are forced against the drums with greater pressure than that provided by the hydraulic system. This self-energizing principle gives maximum braking power at the wheels with relatively light pressure on the 1950 Buick brake pedal.

Returning fluid pushes check valve (T) away from the rubber washer (U) on head nut (J) as it enters master cylinder barrel (S), however, the master cylinder spring (R) maintains sufficient pressure on the check valve to provide 8 to 16 pounds static pressure in brake pipes and wheel cylinders after brakes are fully released.

When 1950 Buick brakes are fully released, the master cylinder piston must bear against the stop plate (L) so that the compensating port (H) will not be covered by the piston primary cup (Q). The open compensating port permits a flow of fluid from reservoir into the cylinder barrel in the event that fluid was lost by leakage during brake application.

The action in quick release is generally the same as in the slow release described above, except for a compensating action in the master cylinder.

The piston (D) and primary cup (Q) return to the “released'” position much faster than the fluid in 1950 Buick brake pipes returns to master cylinder barrel (S). A momentary vacuum is created in the space between primary cup and head nut which causes additional fluid to flow into and fill this space through the bleeder holes (P) in piston and past the lip of primary cup. This additional fluid is supplied through the breather port (G) . When the piston reaches the stop plate (L) and the compensating port (H) is uncovered by the primary cup, surplus fluid returns to reservoir through the compensating port.

Under no circumstances should the brakes be severely applied on a new car or immediately after installation of new brake shoes or linings. Severe applications may permanently injure new brake linings and may score brake drums. When linings are new they must be given moderate use for several days until nicely burnished.

Proper fluid level must be maintained in master cylinder reservoir at all times to prevent entrance of air into hydraulic system. See paragraph 1-1 or 8-8.

It is recommended that the entire hydraulic system be thoroughly flushed and new fluid installed every 15,000 miles. See paragraph 8-10.

For average driving conditions, brakes should be adjusted for wear whenever the 1950 Buick brake pedal goes to within 2″ of toe board. If a car is habitually driven at high speed, however, adjustment should be made if pedal pad goes to within 3″ of toeboard when brakes are cold. Heat generated on high speed stops will expand brake drums, permitting pedal pad to travel closer to toeboard.

1950 Buick brakes should be promptly adjusted or otherwise corrected whenever the action becomes unduly severe, erratic, or uneven. Brake shoe linings should not be permitted to wear down until rivets contact drums because drums will be scored. As car mileage approaches the point where relining may be required it is advisable to remove one or more drums for inspection of lining in order to avoid the possibility of damaging brake drums.