NOTE: Where dimensions and limits for fit of parts are given in these specifications they apply to new parts only. Where limits are given, “T” means tight and “L” means loose.

The 1958 Buick Synchromesh transmission counter gear is supported by two roller bearings on a shaft which is held stationary in transmission case by a grooved pin lock driven into holes in case and rear end of shaft. A tubular spacer and two thrust washers are located around the shaft between the roller bearings and a retaining washer is located at outer end of front bearing to hold rollers in position. End thrust is taken by a bronze thrust washer at each end of counter gear. Rea r bronze washer is sandwiched between two steel thrust washers. Front steel washer ‘also retains rollers and rear steel washer is ‘pinned to case. A hole in hub of gear permits lubricant to reach bearings and thrust washers. See figure 4-8.

The reverse idler gear is provided with two bronze bushings and is supported on a shaft which is held stationary by a grooved pin lock driven into holes in 1958 Buick Synchromesh transmission case and front end of shaft. End thrust is taken by a bronze thrust washer at each end of idler gear. A hole in hub of gear permits lubricant to reach bushings and thrust washers.

The first and reverse sliding gear is splined to the main shaft, to rear of second speed gear, so that it can be moved forward to engage the counter gear for first speed or rearward to engage reverse idler for reverse. Its forward movement is limited by a snap ring retainer installed in a groove in main shaft. See figure 4-8.

The gear synchronizing clutch and the first and reverse sliding gear are actuated by the shift mechanism. The 1958 Buick Synchromesh gear shift mechanism is described in paragraph 4-9. 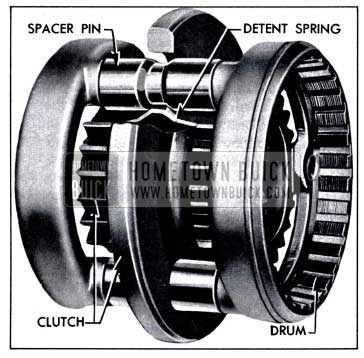 The speedometer driving worm gear is pressed on the 1958 Buick Synchromesh transmission main shaft where it is located by a stop ring. See figure 4-8. An 8 tooth worm is used on all synchromesh cars; all Dynaflow cars use a 9 tooth worm. In changing axle ratios it is only necessary to change the driven gear.

The torque ball is supported between an inner and outer retainer which are centrally located and bolted to the 1958 Buick Synchromesh transmission rear bearing retainer. The torque ball has a bonded rubber compression ring which acts as a rubber cushion and seal between the ball and the outer retainer.

The universal joint, torque ball, and speedometer drive gears are automatically lubricated from the transmission. A breather or air vent is installed in upper side of the rear bearing retainer to prevent a build up of pressure, due to heat, that would force transmission lubricant out past gaskets and oil seals. See figure 4-8.

The first and reverse sliding gear is moved forward or rearward from the neutral position by a shifter yoke mounted on a shaft supported in left side of transmission case. The gear synchronizing clutch is actuated by a yoke and shaft on right side of case. Each shifter yoke shaft is notched for engagement by one of two shifter levers mounted on a selector shaft which is supported in 1958 Buick Synchromesh transmission case at a right angle to yoke shaft. The levers are located on selector shaft so that only one lever at a time can engage its yoke shaft. See figure 4-10. 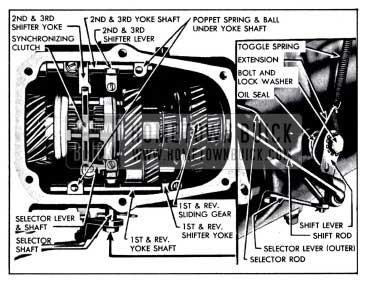 Engagement of a shifter lever with its yoke shaft, to select a gear shift, is obtained by moving selector shaft to right or left as required. This transverse movement of selector shaft is made by a selector lever and shaft which engages a notch in first and reverse shifter yoke. The selector lever shaft extends through 1958 Buick Synchromesh transmission case and has a lever on its outer end which is actuated by a selector rod connected to the selector control mechanism in steering column.

Forward or rearward movement of the selected shifter yoke shaft, to complete the gear shift, is obtained by rotating the selector shaft. This movement is made by a shift lever mounted on outer left end of shaft and actuated by a shift rod connected to the gear shift control mechanism in steering column. A toggle spring and extension attached to shift lever aids in moving the sliding parts. See figure 4-10. A spring loaded poppet ball, housed in a recess in 1958 Buick Synchromesh transmission case under each yoke shaft, engages one of three recesses in shaft to hold the shaft in desired position. 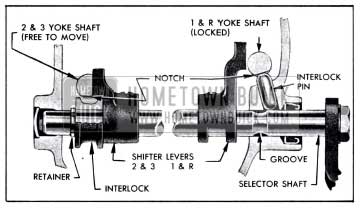 Hard shifting may be caused either by conditions in shift control mechanism in steering column or by conditions in 1958 Buick Synchromesh transmission assembly. Disconnect shift rod trunnion at control shaft lever to determine which unit is at fault.

Conditions in 1958 Buick Synchromesh transmission assembly which may cause hard shifting are: (1) If there is excessive resistance at start of shift, shifter yoke shaft poppet spring probably too stiff. (2) Shifter yoke shaft may be bent.

1958 Buick Synchromesh Transmission gears can be made to clash by shifting into low or reverse gear too quickly after clutch pedal is depressed, even though clutch is in perfect working order. This is because inertia of clutch driven plate causes the plate to spin until it is stopped by friction of transmission and transmission lubricant. With warm transmission lubricant and low friction transmission bearings, a reasonable amount of spin is to be expected. The spin does not occur when shifting quickly into second or high gear because the synchronizing unit stops the driven plate.

To eliminate gear clash, sufficient time MUST be allowed before shifting into low after pedal is depressed or else starts must be made in second gear. There is no objection to making starts in second gear on level ground since the clutch slippage under ordinary driving conditions is not sufficient to produce enough heat to damage driven plate facings.

Conditions within the 1958 Buick Synchromesh transmission which may cause gear clash are: (1) Faulty synchronizing drums or cone surfaces; (2) Excessive main shaft end play; (3) Weak or broken detent springs in gear synchronizing clutch; ( 4) Gear clash also may be caused by a dragging clutch plate.

With car standing, engine running, and 1958 Buick Synchromesh transmission in neutral, the transmission parts in operation are: main drive gear and bearing, counter gear and bearings, reverse idler gear, second speed gear. Disengaging clutch will stop movement of all these parts. By disengaging and engaging clutch it can be determined whether noise originates in these transmission parts and whether the noise is normal. Noise in neutral in the form of a constant regular click is usually caused by a nicked gear or bearing.

Some gear noise is to be expected in all except third speed. Comparison with another car is the only means of determining whether or not gear noise is excessive. Before removing 1958 Buick Synchromesh transmission for correction of gear noise determine by test which gears are noisy under load, so that these can be thoroughly inspected when removed.

Noise When Shifting out of First or Reverse

Shifting out of first or reverse very slowly will usually result in some noise just as the gears disengage. This is normal because of the gear pointing necessary for easy engagement.

In any case of gear jump-out, first check the adjustment of gear shift control mechanism as described in paragraph 4-11. Make certain that poppet balls have full engagement in notches in shifter yoke shaft in all speed positions and neutral. Also make certain that toggle spring extension is not distorted so that it contacts the selector shaft. If these items do not correct gear jump-out, remove 1958 Buick Synchromesh transmission for examination of parts.

Gear jumping out of third speed may be caused by misalignment between the flywheel housing and crankshaft. See paragraph 4-14 for alignment correction procedure.

Jumping out of second speed may be caused by gear synchronizing clutch being installed with wrong end toward second speed gear. See figure 4-24.

1958 Buick Synchromesh Transmission lubricant may be lost at torque ball as a result of;

Gear teeth will be seriously damaged and possibly broken, by failure of car operator to fully engage gears on every shift before engaging clutch and applying engine power.

Considerable damage to gears and bearings will result from running at abnormal speeds in reverse, first and second speed gears. This practice is also detrimental to the engine.

All adjustments are made with the 1958 Buick Synchromesh transmission in neutral and in position for shifting into second or third gear. 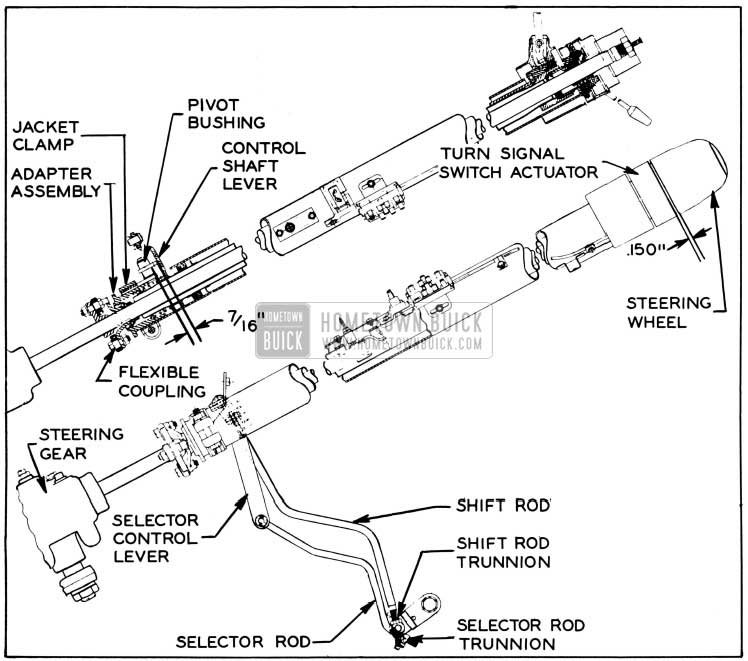 4-12 REMOVAL AND INSTALLATION OF 1958 BUICK TORQUE BALL (SYNCHROMESH OR DYN.)

The 1958 Buick torque ball has a bonded rubber contact ring on the outer ball face which is compressed between the inner and outer retainers. This rubber ring forms an oil tight seal. No shim adjustment is required on a bonded rubber torque ball.

CAUTION: Be sure torque tube guide pins are installed before moving axle assembly back to avoid damaging propeller shaft seal. 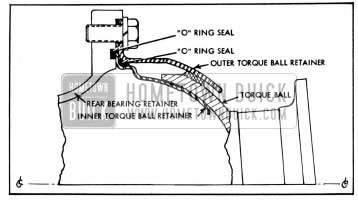 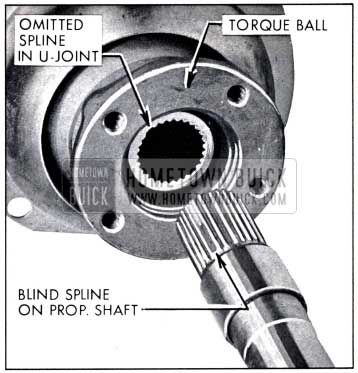 NOTE: These blind splines are used to make sure that the two universal joints will be properly aligned when the rear axle is installed. 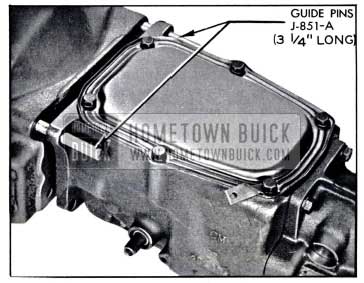 The flywheel upper housing which joins the 1958 Buick Synchromesh transmission to the engine crankcase is attached to the crankcase by bolts, with two straight dowels to maintain alignment.

Misalignment between the pilot hole which receives the main drive gear bearing in rear wall of housing and the pilot bushing in rear end of crankshaft may cause the 1958 Buick Synchromesh transmission to be noisy or to slip out of high gear. To insure correct alignment in production, the pilot hole is bored in the housing after it is assembled to the cylinder crankcase. The flywheel housing furnished for service is completely machined, but it must be checked for alignment after installation. 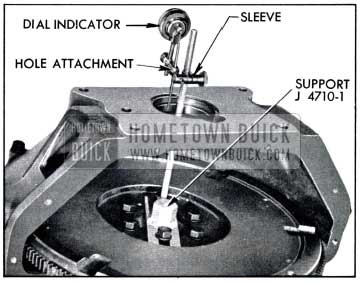 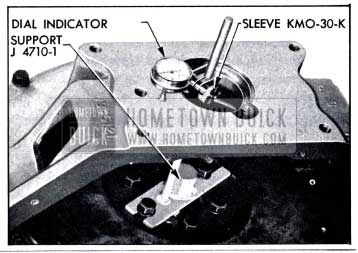 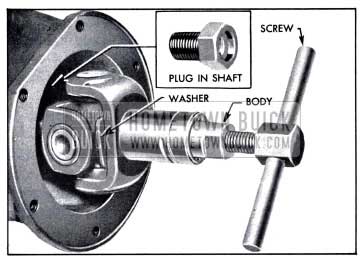 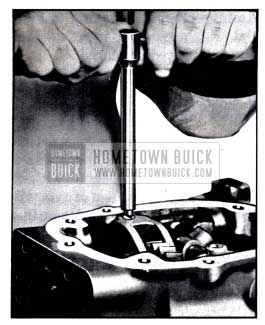 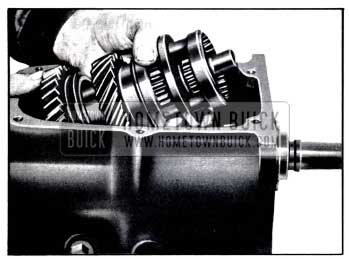 Clean and inspect all ball and roller bearings as described under Bearing Service (par. 1-10). Thoroughly clean all other parts except rubber mountings in CLEAN solvent and wipe dry with CLEAN cloths. Inspect parts as follows: 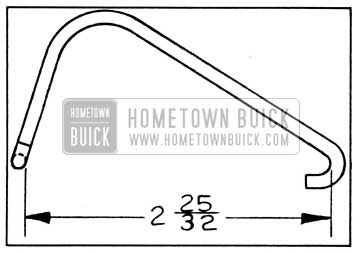 Assemble the 1958 Buick Synchromesh transmission by reversing the sequence of steps given for disassembly. In addition, observe the following instructions that apply to assembly. 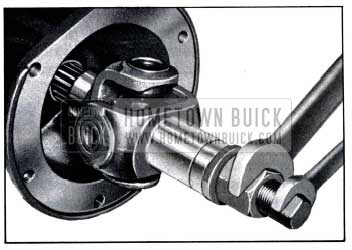 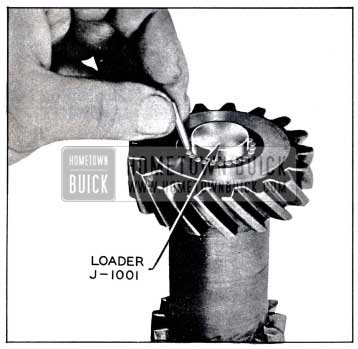 Pack bearing rollers in white vaseline to hold them in place and make certain that all rollers are installed (26 in each bearing). Leave loader in gear until it is pushed out by the counter gear shaft during installation. 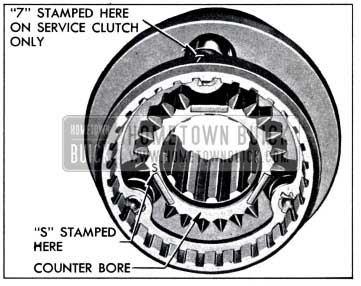 1958 Buick Counterbore and Marks on Second Speed End of Clutch