The Rochester Model 4GC used on the Series 50-60-70-700 engine is a 4-barrel downdraft type which provides the advantages of a compound installation of two 2-barrel carburetors in one compact unit. See figure 3-75. 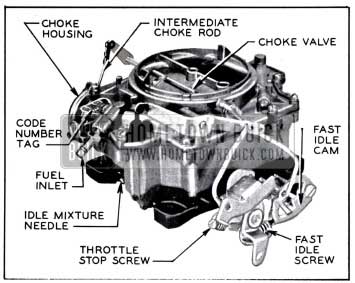 To aid description and the proper identification of parts the 1958 Buick Rochester 4-barrel Carburetor is considered to be divided into a primary section and a secondary section.

The secondary section covers the 2-barrelled rearward half of the 1958 Buick Rochester 4-barrel Carburetor assembly. This section is essentially a supplementary 2-barrel carburetor which cuts in to assist the primary section when a pre-determined throttle opening and engine RPM are reached. This section contains a float system, a non-adjustable idle system, and a main metering system. It has a separate set of throttle valves and a set of auxiliary valves, which are located in the barrels above the throttle valves.

The starter switch, which is operated by the primary throttle valve shaft, is fully described in paragraph 10-30. The other systems of the 1958 Buick Rochester 4-barrel Carburetor are described in the following subparagraphs.

Ea0h section of the 1958 Buick Rochester 4-barrel Carburetor has a separate and independent float system, consisting of a float chamber formed by a partition in the main body, a 2-pontoon float, a needle valve seat and valve. Fuel enters the 1958 Buick Rochester 4-barrel Carburetor through the inlet port in the primary side of the air horn. From this point fuel flows to the separate float chambers through a horizontal passage in the air horn. There is a fuel strainer located just above each needle seat on both the primary and secondary side. Se figure 3-76. 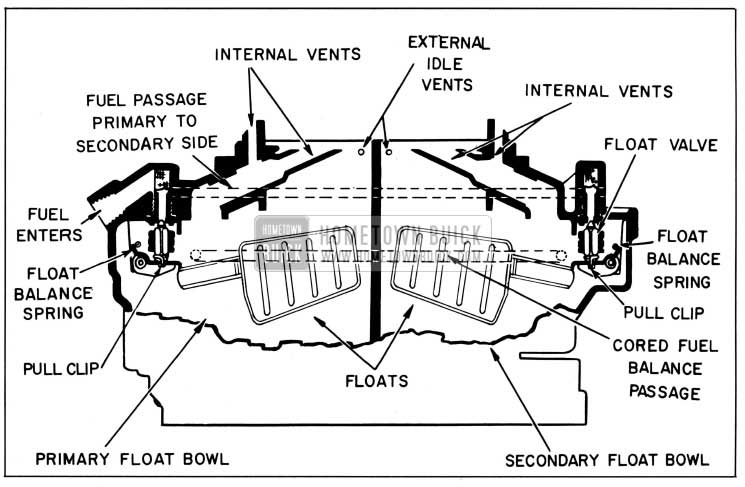 When the fuel reaches the prescribed level in each float chamber the float moves the needle valve against its seat to shut off the flow of fuel. The needle valves are connected to the float levers by clips. Because of these, the needle valves will be pulled from their seats if stickiness is encountered due to gum formation.

The floats are spring loaded at the rear tangs. The purpose of these balance springs is to give a more positive closing of the needle valves. The spring tension against these tangs determines float drop and also helps determine fuel level.

The joint between the air horn and the main body is sealed by a gasket, and the float chambers are vented by passages which are calibrated to provide proper air pressure above the fuel under all operating conditions. These passages in the air horn lead into the throat of the air horn, and to outside atmosphere. The amount of fuel metered by the 1958 Buick Rochester 4-barrel Carburetor depends on the air pressure on the fuel in the float bowl. The external vents permit fumes to escape from the float chambers when the engine is idling or stopped after extremely hot operation.

Each barrel of the 1958 Buick Rochester 4-barrel Carburetor has a separate idle system but the general operation is identical in all barrels. The idle system in each barrel supplies fuel to the engine whenever the position of the throttle valve is such that suction is created at the idle discharge holes in the throttle body.

Suction on an idle discharge hole causes fuel in the float chamber to flow through the main metering jet and upward into the idle tube which meters the fuel. Calibrated bleed holes permit air to enter at the top and side of the idle passage in the cluster so that a mixture of fuel and air passes down the idle channel to the idle discharge holes. Additional air is drawn into the fuel-air mixture in the idle channel through lower idle air bleeds which are in the primary side of the main body. See figure 3-77. 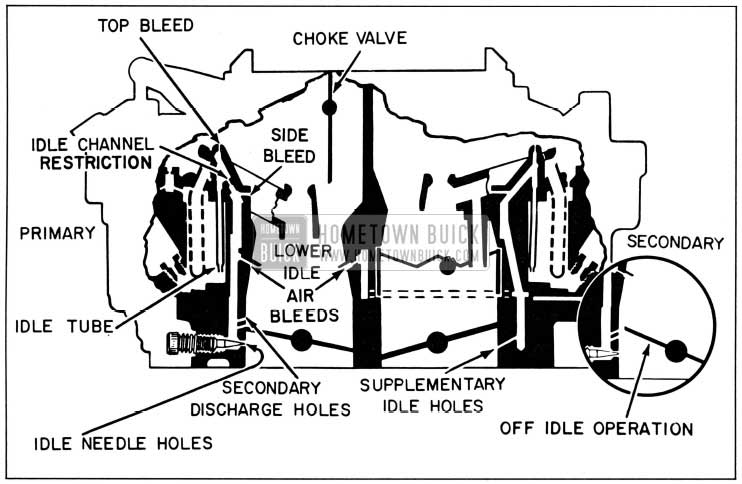 The lower idle air bleeds discharge fuel after the idle systems cease to operate1 thereby keeping fuel immediately available in the idle channels at a point very near the idle discharge holes and also enriching the mixture being delivered by the main metering system.

In the primary section, the quantity of fuel air mixture supplied through the lower idle discharge holes is controlled by the idle needles, which may be adjusted to provide smooth engine idle operation. In the secondary section, the quantity of idle fuel-air mixture is controlled by the fixed size of discharge holes located in the rear of the secondary throttle bores.

Each barrel of the 1958 Buick Rochester 4-barrel Carburetor has a separate main metering system; however, the operation of all systems is identical. The main metering system in each barrel supplies fuel to the engine whenever the position of the throttle valve is such that the incoming air stream creates suction on the main discharge nozzle. 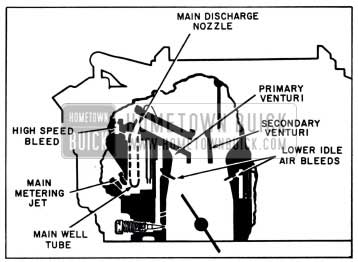 The main metering systems in the primary section control the flow of fuel during the intermediate or part throttle range of operation and up to approximately 85 MPH if the car is accelerated gradually. The secondary throttle valves remain closed until the primary valves have opened approximately 40-44 degrees, after which they are opened proportionately so that all valves reach the wide open position at the same time. While the secondary throttle valves are closed, the auxiliary valves located above them are held closed by the spring tension on the auxiliary valve shaft; therefore, there is not sufficient air flow through the barrels to operate the main metering systems in the secondary section. 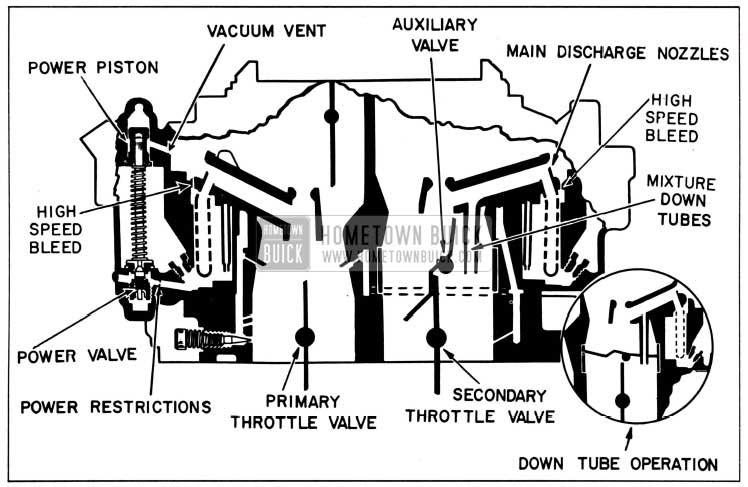 For maximum power under load or for all speeds above approximately 85 MPH, a richer mixture is required than that necessary for normal throttle opening. This additional fuel is provided by one power system connected to the main metering systems in the primary section of the 1958 Buick Rochester 4-barrel Carburetor. See figure 3-79.

The power piston cylinder in the air horn of the 1958 Buick Rochester 4-barrel Carburetor is connected by a channel to the face of the mounting flange so it is subject to intake manifold vacuum. At part throttle position the vacuum is sufficient to hold the power piston in its “up” position against the tension of the piston spring. When the throttle valves are opened to a point where manifold vacuum drops to approximately 9 to 5 inches of mercury and additional fuel is required for satisfactory operation, the piston spring moves the power piston down to open the power valve.

This allows additional fuel to enter the main discharge nozzles in the primary section through calibrated restrictions located below the main metering jets. See figure 3-79.

When the throttle is closed, the pump piston moves up and draws a supply of fuel from the float chamber through the inlet strainer, past the inlet ball check valve and into the pump cylinder. When the throttle is opened, the piston on its downward stroke exerts pressure on the fuel which closes the inlet check ball and opens the outlet check ball. A metered quantity of fuel is then discharged through the pump discharge nozzles into each barrel in the primary section of the 1958 Buick Rochester 4-barrel Carburetor. This occurs only momentarily during the accelerating period. The pump duration spring which is compressed by the downward movement of the pump linkage against the resistance of the fuel provides a follow-up action so that the discharge carries out over a brief period of time. A ball check in the accelerator pump plunger acts as a vapor vent to prevent vapor pressure from forcing fuel from the pump discharge holes during extreme heat periods. Downward movement of the plunger, however, seats the ball and allows normal operation of the accelerating system. See figure 3-80. 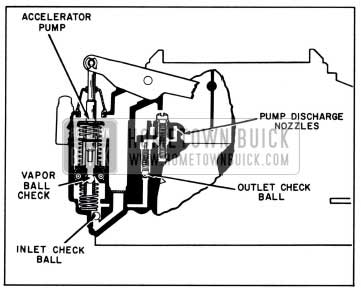 When the desired speed is reached and the throttle is held in a fixed position, the pressure on the fuel decreases sufficiently so that the outlet check ball closes and fuel ceases to discharge from pump nozzles. Thus a quantity of fuel is maintained in the channel adjacent to the outlet check ball where it is immediately available for future requirements.

When the accelerator pedal is depressed to start the engine, the throttle stop screw is lifted clear of the fast idle cam and the thermostat then closes the choke valve. When the engine starts, intake manifold vacuum causes the piston to partially open the choke valve against the spring tension of the thermostat, thereby admitting sufficient air to give a satisfactory running mixture.

When the accelerator pedal is released after starting the engine, the fast idle screw comes to rest against a step of fast idle cam which was rotated to the fast idle position by the closing of choke. This provides proper throttle opening to prevent stalling of the cold engine.

As the engine and exhaust manifold warm up, warm air is drawn through the heat pipe into the choke housing by manifold vacuum. This warms the thermostat, causing it to reduce its spring tension on the choke valve in proportion to the increase in temperature. This, in turn, allows the choke valve to be opened by the combined forces of air velocity on the valve and vacuum on the choke piston.

When the throttle is opened and the fast idle screw is lifted from the fast idle cam, the choke rod and cam drop by their own weight to bring a lower step into position for the throttle stop screw. The engine will then run at a lower speed at closed throttle.

When the engine reaches normal operating temperature, the choke thermostat is heated to the point where it no longer exerts any spring tension on the choke valve. The choke valve is in the wide open position and the fast idle cam is in the slow idle position so that the fast idle screw misses the cam completely. The throttle stop screw now takes over in determining curb idle speed.

If the engine becomes flooded for any reason, the choke valve can be partially opened by depressing the accelerator pedal to the full extent of its travel. This causes an arm on the throttle lever to contact and rotate the fast idle cam, which forces the choke valve open.

The secondary section does not have a choke valve in the air horn. In order to prevent air from entering the 1958 Buick Rochester 4-barrel Carburetor through the secondary side during the engine warm-up period it is necessary to block the movement of the secondary throttle valves by means of the lock-out slot in the fast idle cam. 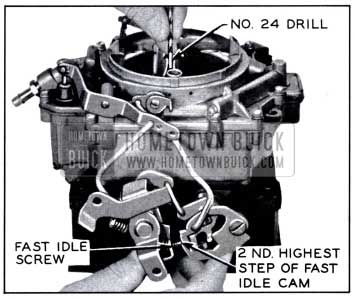 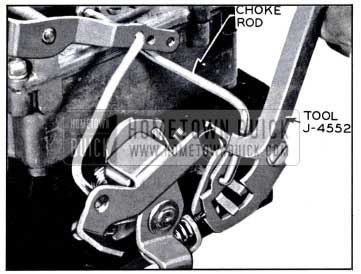 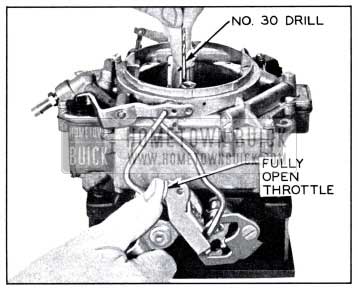 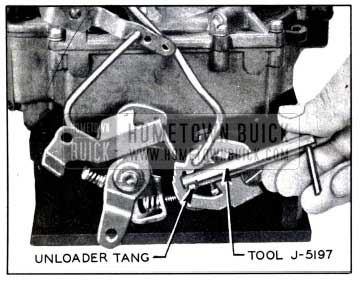 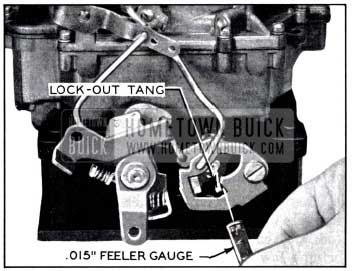 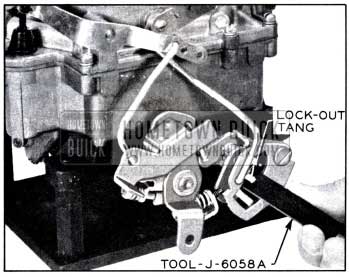 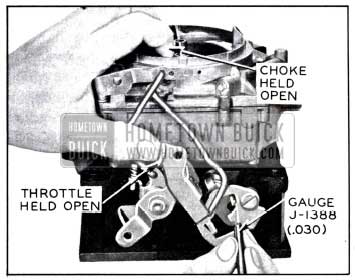 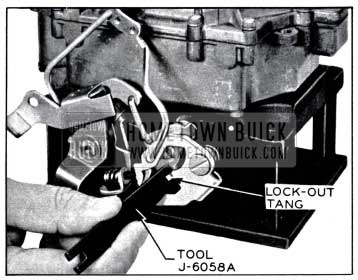 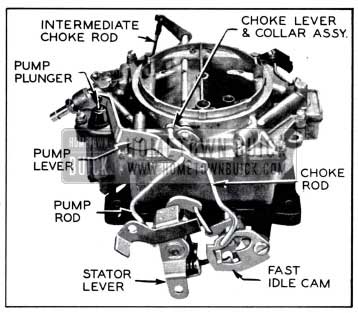 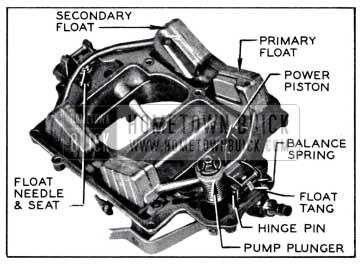 
When assembling the 1958 Buick Rochester 4-barrel Carburetor, use all new gaskets and any additional new parts found to be necessary during inspection. Calibrated parts must be as specified for carburetor CODE number. 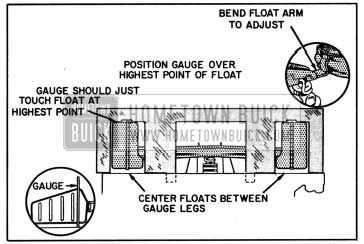 To recheck float alignment, align bowl cover gasket with screw holes in cover. Then make sure all float pontoons are centered in and aligned with the gasket cutouts. See figure 3-94. 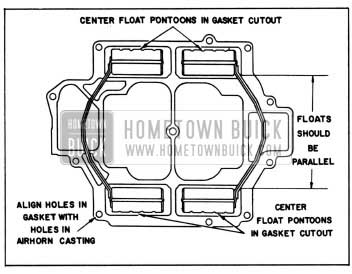 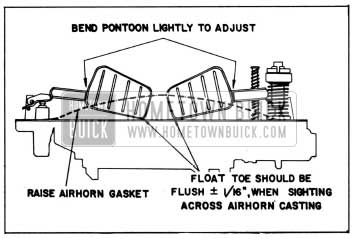 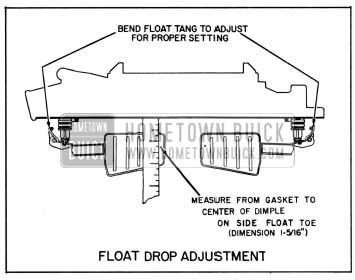 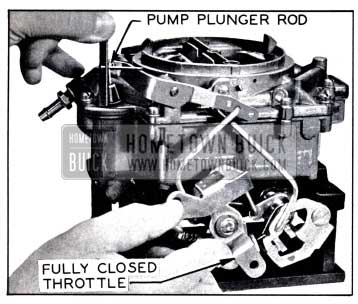 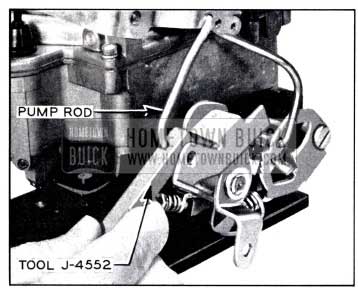 NOTE: Pump adjustment must be made with rod placed in center hole in pump lever. 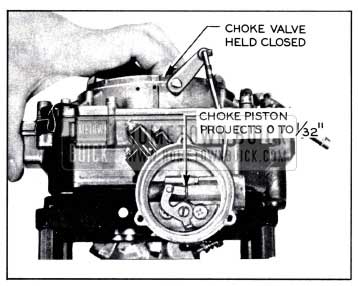 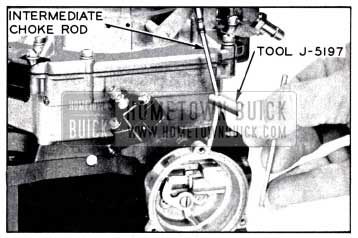