The Carter Model AFB carburetor used on the Series 50-60-70-700 engine is a 4-barrel downdraft type which provides the advantages of a compound installation of two 2-barrel carburetors in one compact unit. See figure 3-40.

To aid description and the proper identification of parts the 1958 Buick Carter 4-barrel Carburetor is considered to be divided into a primary section and a secondary section.

The secondary section covers the 2-barrelled rearward half of the 1958 Buick Carter 4-barrel Carburetor assembly. This section is essentially a supplementary 2-barrel carburetor which cuts in to assist the primary section when a pre-determined car speed or engine load is reached. This section contains its own high speed system. It has a separate set of throttle valves and a set of auxiliary valves which are located in the barrels above the throttle valves.

The starter switch, which is operated by the primary throttle valve shaft, is fully described in paragraph 10-30. The other systems of the 1958 Buick Carter 4-barrel Carburetor are described in the following subparagraphs.

The purpose of the float system is to maintain an adequate supply of fuel at the proper level in the bowl for use by the low-speed, high speed, pump and choke circuits. 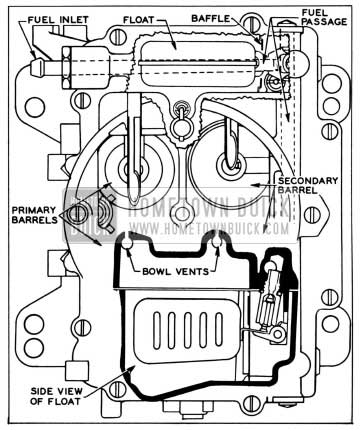 Setting the floats to specifications assures an adequate supply of fuel in the bowls for all operating conditions. Special consideration should be given to be sure the floats do not bind in their hinge pin brackets or drag against inner walls of bowl.

Intake needles and seats are carefully matched during manufacture. Do not use the left needle in the right seat or vice versa. To avoid unnecessary bending, both floats should be reinstalled in their original positions and then adjusted. 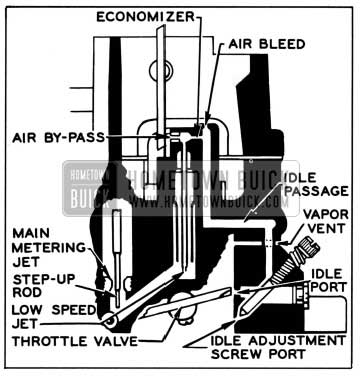 Gasoline enters the idle wells through the main metering jets. The low speed jets measure the amount of fuel for idle and early part throttle operation. The air by-pass passages, economizers and idle air bleeds are carefully calibrated and serve to break up the liquid fuel and mix it with air as it moves through the passages to the idle ports and idle adjustment screw ports. Turning the idle adjustment screws toward their seats reduces the quantity of fuel mixture supplied by the idle circuit.

The low speed jets, air bleed, economizer and by-pass bushings are pressed in place in the venturi assemblies. Do not remove in servicing. If replacement is necessary, use a new venturi assembly. To insure proper alignment of the low speed mixture passage, each primary venturi assembly is designed so it can be installed on one side only.

To assist in quick hot engine starting, fuel vapor accumulated in the primary and secondary bores is vented to atmosphere through vent passages above throttle valves.

To compensate for loss of engine RPM while idling under very hot operating conditions, a thermostatic valve assembly is installed in the web between the right and left secondary venturi. When the temperature rises beyond a certain point, the calibrated thermostatic spring opens the valve. This allows additional air to flow through a special passage to an outlet below the secondary throttle valves. The thermostatic valve cannot be adjusted or repaired; therefore, a faulty valve must be replaced. See figure 3-43. 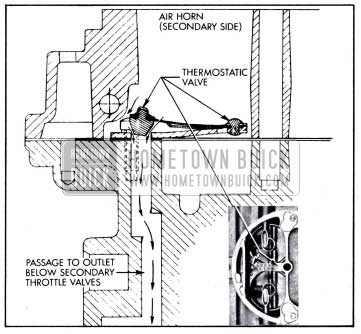 Fuel for all except early part throttle and for all full throttle operation is supplied through the high speed system. See figure 3-44. 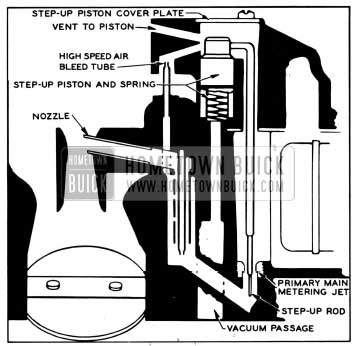 Under any operating condition, when the tension of the spring overcomes the pull of vacuum under the piston, the step-up rod will move up so its smaller diameter or power step is in the jet. This allows additional fuel to be metered through the jet. The step-up rod does not require adjustment.

Fuel for the high-speed circuit of the secondary is metered at the main metering jets (no step-up rods used). See figure 3-45. 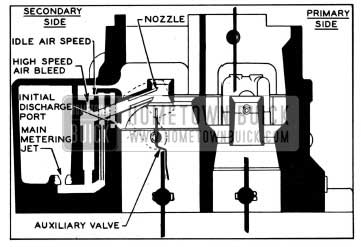 The main vent tubes on primary and secondary sides mix air drawn through the high speed air bleed with the fuel before it passes out of the nozzles.

A clogged air bleed or main vent tube may cause excessively rich mixtures. The high speed bleed and main vent tubes are permanently installed. If replacement is necessary, use a new venturi assembly.

The high speed bleeds also act as anti-percolator vents when a hot engine is stopped or at idling speed. This will help vent fuel vapor pressure in the high speed and idle well before it is sufficient to push fuel out of the nozzles and into the intake manifold.

The high speed systems in the primary section control the flow of fuel during the intermediate or part throttle range of operation and up to approximately 85 MPH. The secondary throttle valves remain closed until the primary valves have opened approximately 40-45 degrees, after which they are opened proportionately so that all valves reach the wide open position at the same time. While the secondary valves are closed, the auxiliary valves located above them are held closed by the weights on the auxiliary valve shaft lever (fig. 3-45); therefore there is not sufficient air flow through the barrels to operate the high speed systems in the secondary section.

For maximum power or high speed operation above approximately 85 MPH, a richer mixture is required than that necessary for normal throttle opening. The richer mixture is supplied through the high speed systems in the primary section through vacuum control of the step-up rods.

Each power circuit consists of a vacuum piston located in a cylinder connected to manifold vacuum and a spring which tends to push the piston upward against manifold vacuum. See figure 3-46. 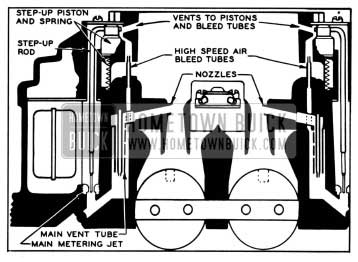 The accelerating pump circuit, located in the primary side, provides a measured amount of fuel necessary to insure smooth engine operation on acceleration at lower car speeds. 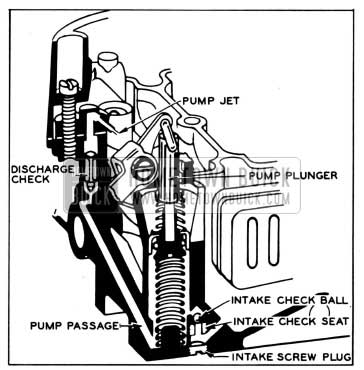 At higher car speeds, pump discharge is no longer necessary to insure smooth acceleration. When the throttle valves are opened a predetermined amount, the pump plunger bottoms in the cylinder eliminating further pump discharge.

Be sure the pump plunger leather is in good condition and the intake and discharge checks and pump jet are free of lint, gum or other foreign matter. To facilitate service, the intake check ball and seat may be inspected and replaced by removing the screw-in plug in the face of the flange without complete disassembly of the 1958 Buick Carter 4-barrel Carburetor.

The choke circuit, located in the primary side, provides the correct mixture necessary for quick cold engine starting and during engine warm-up.

When the engine starts, slots located in the sides of the choke piston cylinder are uncovered, allowing intake manifold vacuum to draw warm air through the climatic control housing. This air is heated in a tube running through the exhaust manifold stove. The flow of warm air heats the thermostatic coil and causes it to lose some of its tension. The thermostatic coil loses its tension gradually, until the choke valve reaches full-open position.

If the engine is accelerated during the warmup period, the corresponding drop in manifold vacuum allows the thermostatic coil to momentarily partially close the choke, providing a richer mixture. 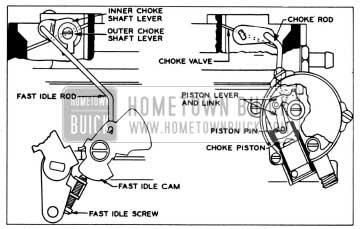 If during the starting period the engine becomes flooded, the choke valve may be opened manually to clean out excessive fuel in the intake manifold. This is accomplished by depressing the accelerator pedal to the floor mat. The unloader projection on the throttle lever contacts the fast idle cam which rotates and partially opens the choke valve.

The secondary section does not have a choke valve. In order to prevent air entering the 1958 Buick Carter 4-barrel Carburetor through the secondary side during the engine warm-up period, it is necessary to lock the secondary throttle valves in the closed position. This is accomplished by engagement of a lock-out arm with a locking tang on the valve shaft lever. See figure 3-40. 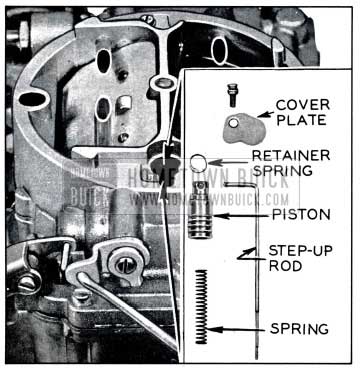 For normal cleaning and inspection, it is not necessary to remove primary or secondary throttle valves and their connecting linkage. However, if throttle linkage is worn or damaged, service replacement parts are available.

During assembly of 1958 Buick Carter 4-barrel Carburetor, use all new gaskets and any additional new parts found to be necessary during inspection. Calibrated parts must be as specified for carburetor CODE number which is stamped in edge of mounting flange at rear center. 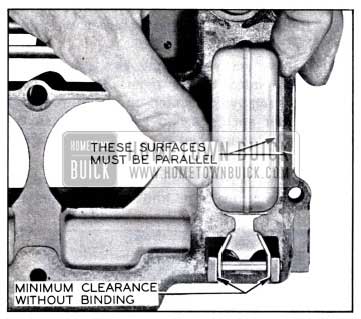 Remove any excess clearance between arms of float lever and lugs on air horn by bending float lever arms. Arms should also be parallel to inner surfaces of lugs. After aligning, each float must operate freely. 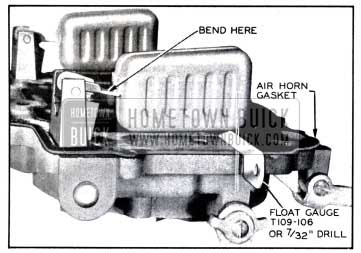 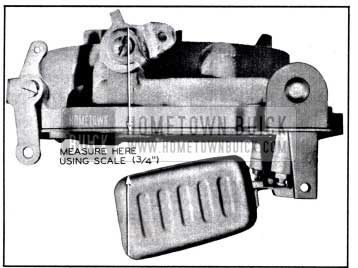 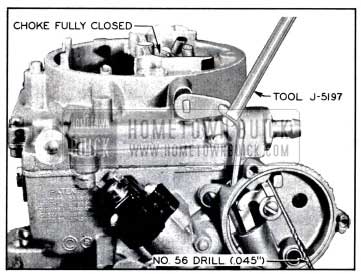 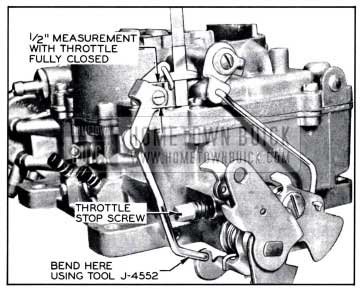 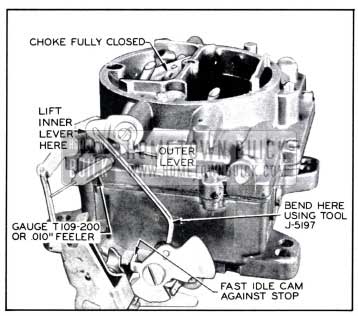 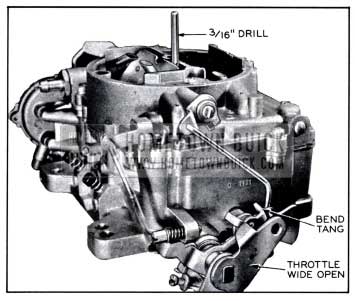 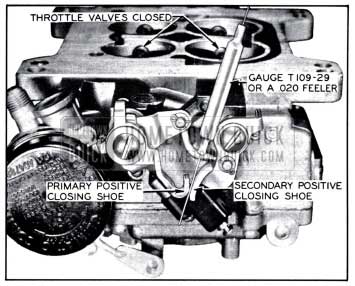 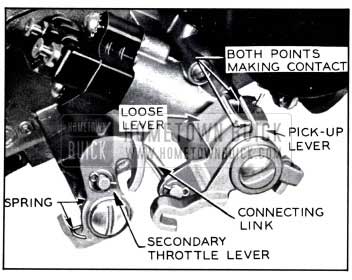 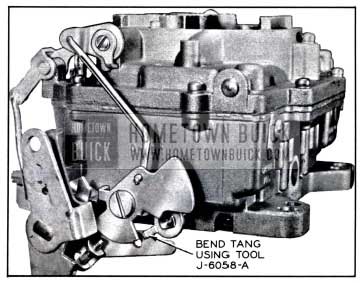