The 1952 Buick Series 50 and 70 windshield wiper motor is mounted on an auxiliary drive which is attached to the front face of the cowl panel, under the hood. The motor drives a short shaft in the auxiliary drive which extends through the cowl panel. A cross lever on rear end of the auxiliary shaft actuates the wiper transmissions through cables attached to the lever and to pulleys in the transmissions. The cables run around pulleys on cable tensioners mounted under the cowl. Each cable tensioner has a spring and ratchet which automatically take up slack and maintain proper tension on the cables.

CAUTION: 1952 Buick windshield wiper arms must not be rotated by hand for any reason as this places an undue strain on the cable fasteners.

A rubber tube connects the control valve on the wiper motor to the vacuum pump, which is connected by another tube to the engine manifold. The motor control valve is operated by a bowden cable connected to the wiper control knob mounted on left end of instrument panel. The 1952 Buick windshield wiper is operated, with engine running, by turning control knob clockwise. When car is equipped with a windshield washer the wiper control contains a button to control washer operation as described in Paragraph 11-2. 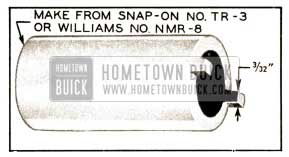 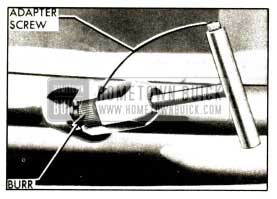 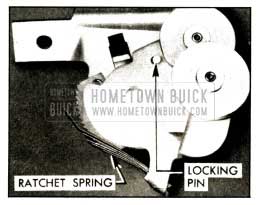 IMPORTANT: Belt, header, and reveal moldings must not be pried loose as they are retained by clips and bolt type retainers.

This paragraph contains replacement information on the various types of external moldings at 1952 Buick windshield and back window openings.

The Series 40 front end belt molding consists of three sections held in place by the overlapping 1952 Buick windshield wiper transmissions and by bolt type retainers. A rubber sealing washer and a plain washer are placed over each retainer bolt under the cowl before the nut is installed.

The Series 50-70 front end belt molding consists of two sections, with right hand section overlapping the left hand section at the center. Three bolt type retainers attach each section of molding and one retainer attaches both sections where they overlap at the center. Rubber sealing washers are placed on each retainer bolt between the molding and cowl panel. See figure 13-18. A single screw attaches outer end of each molding to the body pillar. 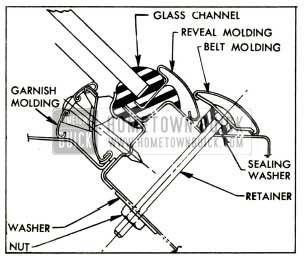 The right hand section of 1952 Buick windshield header molding overlaps the left hand section at the center. The sections are attached by six bolt type retainers having barrel nuts located in the windshield header under the headlining. Rubber sealing washers are placed on retainer bolts between the molding and roof panel. See figure 13-19. A single screw attaches outer end of each molding to the body pillar. 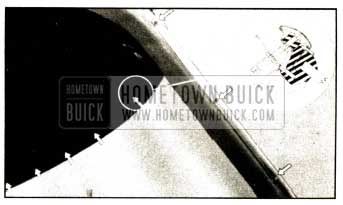 Lower reveal moldings on three-piece back windows are retained by clips inserted into grooves in the window glass rubber channel.

Clipped moldings can only be replaced after the glass and channel assembly is removed from window opening as described in paragraph 13-13.

Use new retainers when installing reveal molding, since old ones have been cut off after installation. Place retainers in molding with short side of plate toward the inner or glass side of molding. See figure 13-20. 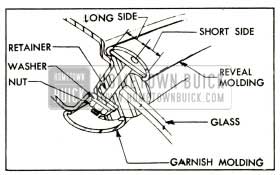 Seal retainer bolts with 3-M Weatherstrip Adhesive before installation of molding. After installation, draw nuts up firmly then cut off surplus ends of bolts to provide clearance when garnish molding is installed.

On bodies other than Convertible, remove rear end belt molding as follows: 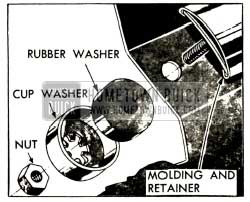 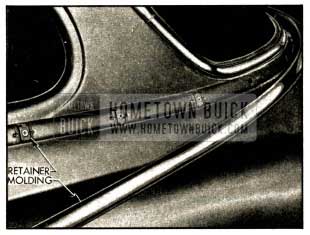 The reveal moldings which cover the outer sides of the rubber channel have flanges which hook into grooves in the channel. Where corner reveal moldings are used they are attached by bolts with nuts located under the inside edge of the channel. Some models have a header molding which partly covers the upper reveal molding and must be removed when a 1952 Buick windshield glass is replaced.

On a 2-piece windshield also remove the inner and outer division moldings. 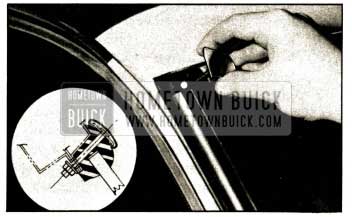 On Series 50-70, remove the front end belt molding (par. 13-11, a) only if the complete windshield and rubber channel assembly is to be removed. This is not necessary for replacement of 1952 Buick windshield glass only.

On Series 50-70, break the seal along the top and sides and avoid disturbing the sealing along the bottom unless the complete glass and channel assembly is to be removed.

On Series 40 2-piece windshield, or Series 50-70 windshield, block upper corner of glass to hold it away from the opening. Slide the upper and side reveal moldings out of rubber channel, loosen the seal between the glass and outer lip of channel and remove the glass.

After removal of old sealing compound and inspection of the rubber channel and pinchweld flange, the installation is generally the reverse of removal, with particular attention being paid to proper sealing to avoid water leaks.

If the rubber channel was removed, assemble the new glass and channel on a bench, as follows: 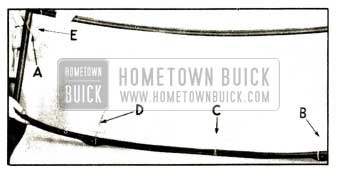 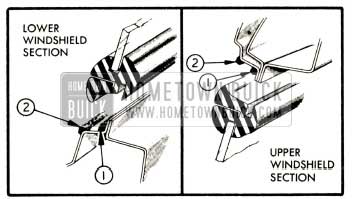 On a 2-piece windshield on which the upper reveal molding has been cut at the center, make certain that the cut ends of molding are together and are covered by the upper end of the outer division molding.

1952 Buick back window glasses are mounted in a molded rubber channel which fits over a pinchweld flange formed by the body panels around the window opening.

The procedure for removal, installation and sealing of a back window glass is essentially the same on all models, with the exception of variations caused by differences in the reveal moldings.

Removal of Back Window Glass Assembly

If body has a center arm rest, remove arm rest extension strap retainer by removing two screws concealed under upper end of strap, then remove seat back trim valance by removing all screws attaching it to the shelf panel.

Installation of Back Window Glass Assembly

On three-piece back window, install the center section in rubber channel first, then install the side sections.