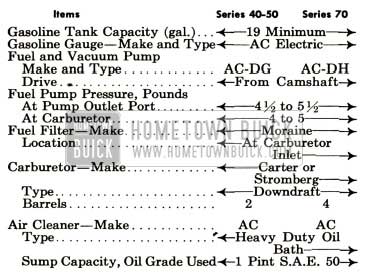 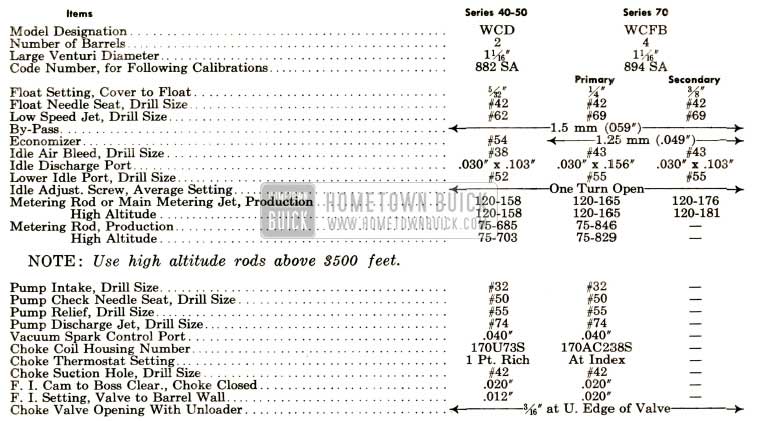 IMPORTANT: Calibrations are governed by the CODE NUMBER on attached code tag and not by the model number cast on main body below the fuel inlet. Carburetors of same model number but different code numbers are not interchangeable. 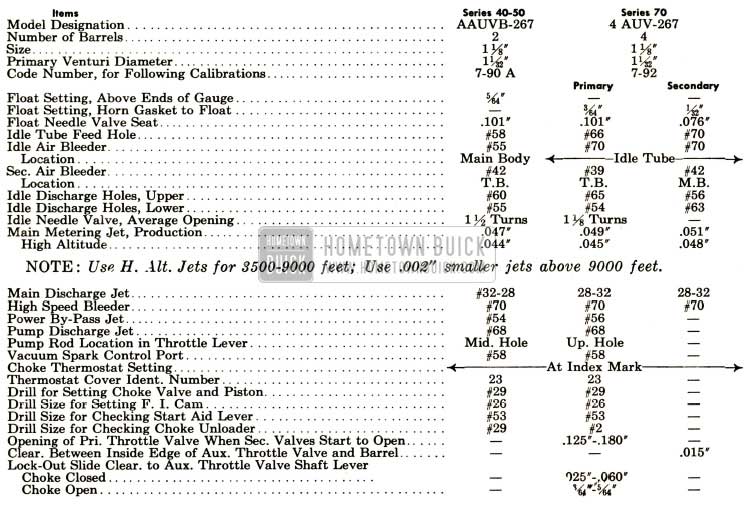 IMPORTANT: Calibrations are governed by the CODE NUMBER stamped on air horn directly above the fuel level sight plug and not by the model number. Carburetors of same model but different code numbers are not interchangeable.

The 1952 Buick gasoline tank is made of two halves ribbon-welded together at the joining flanges. Two internal baffles spot-welded to the upper half at centerline of tank at the support seats act as struts to maintain the shape of tank and prevent flexing due to weight of gasoline and pull of the supporting straps.

The filler is soldered into its opening in the upper half of tank and the inner end is supported by the left baffle. An internal pipe and a groove in the upper end of filler, where the cap seats, provide a protected air vent for the tank. See figure 3-12.

The 1952 Buick gasoline tank is attached by two strap type supports to the body under the trunk compartment, where it is seated against strips of anti-squeak material. The rear feed pipe, which is connected to the gasoline gauge tank unit is supported by clips on the body. The rear feed pipe and the front feed pipe, which is connected to the fuel pump, are joined by a rubber hose which provides the flexibility required by movement of the engine on its rubber mountings. Flared type fittings are used at all other feed pipe connections.

The combination fuel and vacuum pump is mounted on the right side of crankcase at the front end and is driven directly from the engine camshaft. The construction and operation of the pump assembly is described in Section 3-D.

1952 Buick engines of all series are equipped in production with either a Carter or a Stromberg downdraft type carburetor. Both makes are considered standard and it is not intended that these units be interchanged to provide “optional” equipment.

The 1952 Buick air cleaner consists of an oil sump and a cleaner element containing a filtering mesh which nests down into the sump above the oil level. The sump is filled with S.A.E. 50 engine oil to a predetermined level. 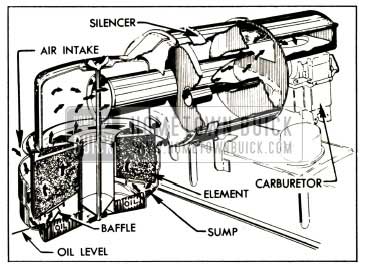 When the throttle is closed, any excess oil on the filtering mesh drips back into the sump carrying the collected dirt with it. This dirt then settles to the bottom of the sump.

The 1952 Buick carburetor throttle control linkage is designed to provide positive control of the throttle valves through their entire range without being affected by movement of the engine in its rubber mountings. The linkage also serves to operate the accelerator vacuum switch when cranking the engine.

On cars equipped with Dynaflow Drive, a dash pot is included in the throttle control linkage to prevent engine stalling when the accelerator pedal is suddenly released while driving. The dash pot cushions the closing of the throttle to prevent sudden shut off. The dash pot operating lever and adjusting screw are mounted on the lower end of accelerator equalizer shaft so that the adjusting screw contacts the plunger of dash pot, which is mounted on the equalizer shaft lower bracket. See figure 3-7.

The 1952 Buick dash pot is an atmospheric type in which a diaphragm and calibrated by-pass controls the closing of the throttle valves. The dash pot is sealed at assembly and no adjustment or other service is required.

The 1952 Buick intake and exhaust manifolds are separate units jointed together by a valve body through which hot exhaust gasses may be directed into a heat jacket cast on the intake manifold to heat the area below the carburetor.

The 1952 Buick intake manifold is of dual type, having two separate branches with the carburetor mounted at the middle of both branches. See figure 3-2.

The amount of heat supplied to the 1952 Buick intake manifold below the carburetor is regulated in accordance with operating requirements by means of the exhaust manifold valve. The valve is controlled by a bi-metal thermostat wound around the valve shaft so as to act as a spring to close the valve when engine is cold. The inner end of the thermostat engages a slot in valve shaft and the hooked outer end engages an anchor stud on the valve body. 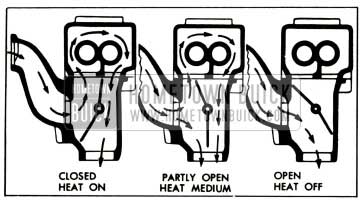 The 1952 Buick exhaust manifold valve is offset or longer on the lower side of the shaft. This allows exhaust gas pressure to force the valve open when the engine is accelerated or operated with wide open throttle, thus reducing the heat to the intake manifold.

The 1952 Buick muffler is a “straight through” type with resonance chambers which absorb and dampen out the exhaust sound waves. A slip joint at one end allows for expansion and contraction due to temperature changes.

The word “Front” is stamped on one end of the outer shell of muffler to indicate the end to place toward front of car during installation.

The drain hole in outer shell should always be located at the bottom. The exhaust pipe is connected to the exhaust manifold by a bolted flange and a gasket. The exhaust pipe and tail pipe connect to the muffler through slip joints provided with clamps. All exhaust system parts are flexibly mounted to allow for engine movement and for expansion and contraction due to temperature changes. All supports have fabric straps which provide the required flexibility and also serve to insulate exhaust system vibration from the chassis. See figure 3-4. 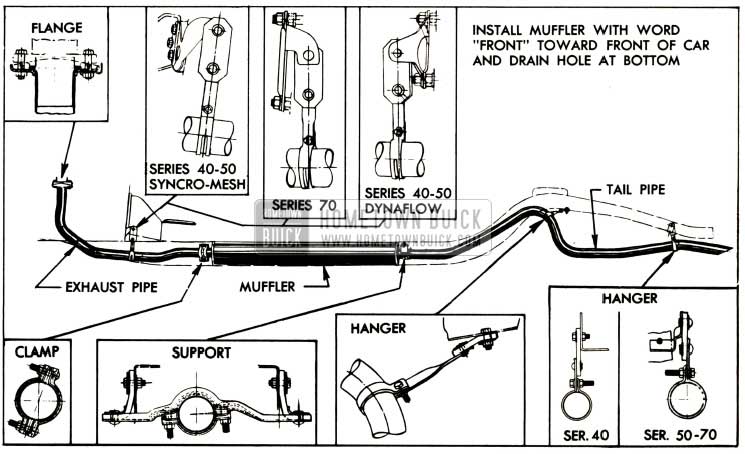