The battery is located under the hood on the right side where it is fully protected, accessible, and close to cranking motor and engine so that short cables may be used. The 1952 Buick battery is mounted on a base bolted to the frame right side rail and is securely anchored to the base by two long clamp bolts and a hold down strap. The clamp bolts have wing nuts and plain washers which bear against rubber grommets seated in the bolt holes in the hold down strap.

The 1952 Buick battery negative (-) post is grounded by a braided copper ground strap bolted to the engine mounting bracket. The 1952 Buick battery positive (+) post is connected by an insulated copper cable to the battery (right hand) terminal on the cranking motor solenoid switch. The cable terminals at the battery and switch are covered with rubber boots to protect against any short-circuiting.

10-15 REGISTRATION AND CARE OF NEW BATTERIES

Delco-Remy Battery dealers and distributors are prepared to carry out terms of the manufacturer’s warranty on Delco-Remy batteries. In order that Buick owners shall have the protection and benefit of this warranty, it is necessary for the dealer or car owner to register his battery with the local Delco-Remy Battery dealer or distributor on all new car deliveries, and on all deliveries 0f new replacement Delco Remy batteries. 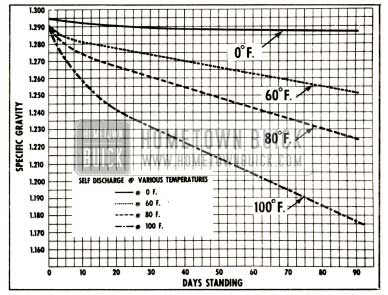 To minimize the extent of self-discharge always store batteries in the coolest possible place, but avoid freezing temperatures. At frequent intervals check the level of electrolyte and add water as required; also check the specific gravity with a hydrometer (par. 10-19).

A boosting charge at a moderate rate (par. 10-22), without excessive overcharge, must be given batteries in storage whenever the specific gravity falls to 1.250, corrected for temperature. Batteries used for display purposes or standing in cars in storage must be treated in the same manner as batteries in stock.

When a new car, or a new replacement battery is delivered, make certain that it is fully charged and the electrolyte is at proper level. This is extremely important because the delivery of a partially discharged battery may not only lead to its return for charging but may also result in shortened life of 1952 Buick battery.

The 1952 Buick battery has three major functions: (1) It provides a source of energy for cranking the engine. (2) It acts as a stabilizer to the voltage in the electrical system. (3) It can for a limited time furnish energy when the demands of the electrical units in operation exceed the output of the generator.

In order for the 1952 Buick battery to continue to function, it is necessary that current withdrawal from the battery be balanced by current input from the generator so that the battery is maintained in a properly charged condition. If the outgo exceeds the input the 1952 Buick battery will become discharged so that it cannot supply sufficient energy. The proper functioning of the generator and regulator, therefore, has an important bearing on the proper functioning of the battery.

The following comparison shows how states of charge at temperatures of 80°, 32°, and 0° F. affect efficiency and cranking power, with efficiency in the fully charged state at 80° F. equal to 100 %. 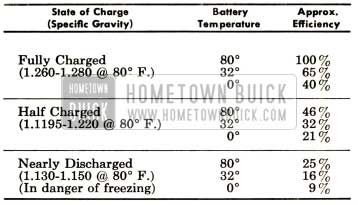 In extremely cold climates it is important to keep batteries in a nearly full charged condition to avoid the possibility of freezing, which will damage any 1952 Buick battery. Figure 10-2 shows the temperatures at which freezing will occur in electrolytes of different densities, with specific gravity corrected to 80° F. Note that at 1.160 the electrolyte will freeze at approximately 0°F. 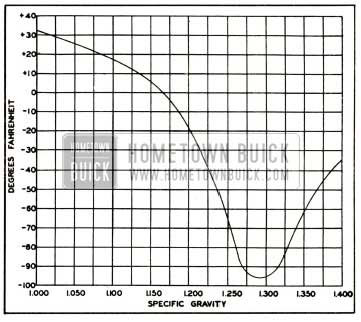 CAUTION: The gas which is produced in the 1952 Buick battery cells during charging is dangerously explosive. Extreme care must be taken to avoid bringing open flames, lighted matches, etc., near a battery which is or has been recently on charge, and which is or has been gassing. Likewise care must be taken to avoid causing any sparks near a battery, since this can also set off an explosion of the gases. Before making contact with battery it is advisable to establish metallic contact between car bumper and ground to discharge any static charge in the car.

Check hold down bolts occasionally to make certain the 1952 Buick battery is held securely to battery base on the frame. The wing nuts should be drawn up finger tight; tightening wing nuts with pliers or wrench may distort the battery case.

If the top of 1952 Buick battery is dirty or the hold down strap is corroded, clean thoroughly with a brush dipped in ammonia or soda solution. Tighten vent plugs to prevent any solution from getting into battery cells. After the foaming of solution stops, flush off with clean water and dry thoroughly. If hold down strap is corroded it should be painted with acid-resisting paint after cleaning.

Maintain the electrolyte at the proper level in each cell by adding pure water as required. Fill to ledge at bottom of slot in well on batteries having filler well shown in figure 10-3. 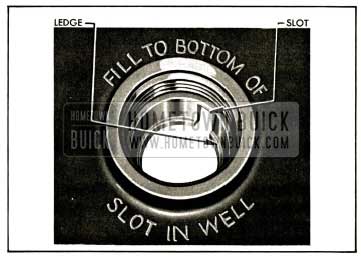 On batteries which do not have this type filler well, fill to 14″ above the separators, unless the 1952 Buick battery is marked with other instructions. Do not overfill, as electrolyte may be sprayed out by gassing during charging. After filling, see that gaskets are in place when filler plugs are installed and tightened.

In freezing weather the water should be added just before using the car or otherwise charging the 1952 Buick battery so that the water will be mixed with the acid before it is allowed to stand in freezing temperatures.

If it is found necessary to add water to the 1952 Buick battery more frequently than about every 1,000 miles and the quantity of water added per cell is great, check setting of voltage regulator and adjust, if necessary (par. 10-29). Abnormal water loss is an indication that the battery is being overcharged.

Water is the only component of the 1952 Buick battery which is lost as the result of charging and discharging, and it must be replaced before the electrolyte level falls to the tops of the separators. If the water is not replaced and the plates and separators become exposed, the acid will reach a dangerously high concentration that will char and disintegrate the wood separators and may permanently sulphate and impair the performance of the plates. Plates cannot take full part in the battery action unless they are completely covered by the electrolyte. Separators are no longer porous in the area that has once dried out as a result of exposure, therefore the corresponding area of adjoining plates is rendered inactive and subject to continuous sulphation.

Pure water for use in automotive batteries should be either distilled water or a good grade of chemically analyzed drinking water approved for battery use. Even slightly impure water is better than no water at all; however, such water should be used in emergency only. Battery water should be kept in a covered glass, earthenware or hard rubber container; never use a metallic container.

Correction can be made for temperature by adding .004, usually referred to as 4 “points of gravity,” to the hydrometer reading for every 10° F. that the electrolyte is above 80° F. or subtracting .004 for every 10° F. that electrolyte is below 80° F. Figure 10-4 shows the exact correction figure to use for any temperature above or below 80° F., the three steps used in obtaining the corrected or true specific gravity, and two examples showing how it is figured. 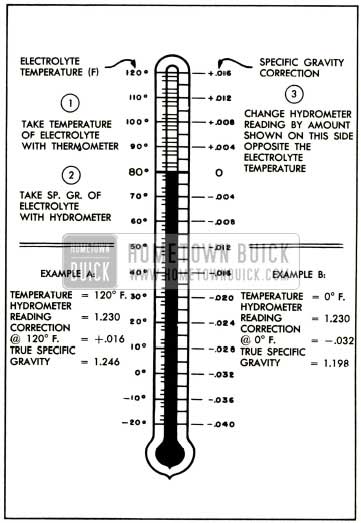 CAUTION: Gas formed in battery during charge is dangerously explosive. Sparks produced by test equipment may set off an explosion if gas remains in top of battery cells. If battery has been gassing recently, remove filler plugs, blow the gas out of cells and away from area, and install filler plugs before performing high discharge tests.

A high discharge test of battery may be made with equipment comprising a voltmeter (5 volts minimum), ammeter of 300 or more amperes capacity, and a carbon-pile rheostat having a minimum capacity of 300 amperes connected in series with the ammeter. This test may be made with battery either installed or removed, and without cranking the engine. 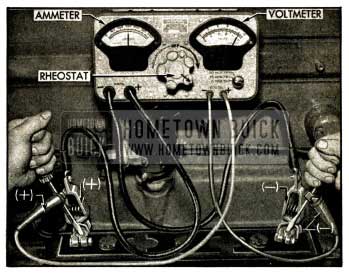 If equipment specified above is not available, the battery may be given a high discharge test by using a low-reading voltmeter while cranking the engine. The voltmeter leads must be provided with long sharp prods so they can be pressed through sealing compound to contact the cell terminal posts. 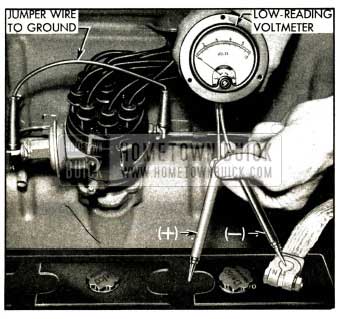 Inspection of Cables and Terminals

1952 Buick battery cables and terminal connections may be tested with equipment comprising a voltmeter (5 volts minimum), ammeter of 300 or more amperes capacity, and carbon-pile rheostat having a minimum capacity of 300 amperes connected in series with the ammeter. This method is preferred to use of voltmeter only (subpar. c below) because the desired load is obtained without cranking the engine. 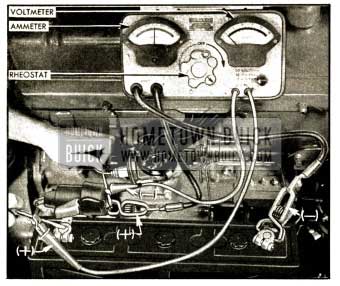 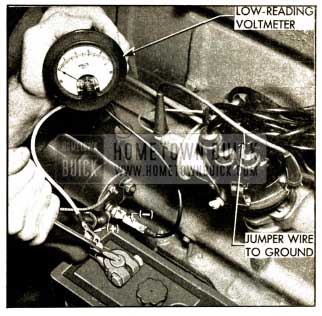 If loose connections are found by inspection, or high resistance is found by voltage test, disconnect the cable for thorough cleaning of terminals. When removing a corroded cable terminal from battery post do not pry against 1952 Buick battery case or hammer on terminal to break it loose, since either practice will result in broken cell covers. Use a screw type terminal puller if terminal cannot be loosened by hand after clamp bolt is fully loosened. See figure 10-9. 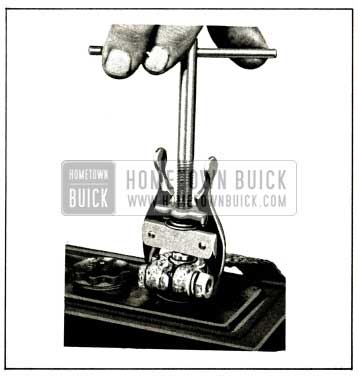 CAUTION: It is advisable to always disconnect the ground cable from battery first, and connect it to battery last, to avoid the possibility of shorting to ground with the wrench while working on the less accessible connections of the positive cable. A wrench shorting to ground from either end of positive cable would carry high amperage and heat quickly, causing serious burns on the hand.

Thoroughly clean all corrosion from disconnected battery cable terminals and terminal posts, using suitable wire brushes (fig. 10-10); do not scrape the protective lead coating from terminals. If wire brushes are not available, corroded terminals may be cleaned by brushing with a strong soda solution, using care not to get solution into 1952 Buick battery cells. 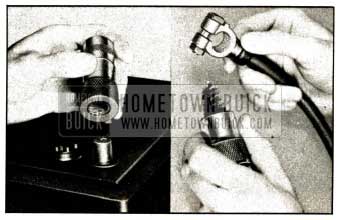 CAUTION: Occasionally, certain chemical “dopes” are offered which their sellers claim will “recharge” the 1952 Buick battery when put into the battery cells. Such chemical substances are harmful to the battery and must never be used. Use of such material voids all battery warranty. The only way to charge a battery is to connect it to a charging circuit.

There are two separate methods of recharging batteries which differ basically in the rate of charge. In the “slow-charge” method, the battery is supplied a relatively small amount of current for a relatively long period of time. In the “quick-charge” method, the battery is supplied with a high current (as much as 100 amperes) for a short period of time.

The “slow-charge” method, properly applied, may be safely used under all possible conditions of the battery, provided electrolyte is at proper level in all cells. The battery may be fully charged by this method, unless the battery is not capable of taking a full charge.

Used with care, and employing all safeguards provided by the manufacturer, a quick-charger will not damage a battery which is in good condition. The “quick-charge” method must not be used, however, if the following conditions exist in the 1952 Buick battery.