An AC combination fuel and vacuum pump is used on all engines. The pump assembly is mounted on the right side of engine crankcase at the front, and is operated by an eccentric on the engine camshaft which actuates the pump rocker arm. 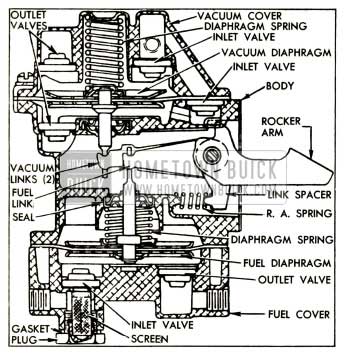 The fuel section of the pump draws gasoline from the tank and supplies it to the carburetor in sufficient quantity to meet engine requirements under all operating conditions. The principle parts of the 1952 Buick fuel section are shown in figure 3-13.

As the rotating eccentric permits the rocker arm to swing upward the arm releases the fuel link; it cannot move the link downward. The compressed diaphragm spring then exerts pressure on the diaphragm and the fuel in the chamber below diaphragm. This pressure closes the inlet valve and forces fuel out through the outlet valve to the carburetor.

The air dome used on the Type DH (Series 70) pump provides a pocket in which fuel under pressure can compress a certain volume of air. When the pressure is relieved (pump on suction stroke) the pocket of compressed air pushes the fuel on to its destination. The air dome minimizes flow variations experienced with a two-cycle pump stroke and increases the pump output.

The vacuum section of the pump acts as a booster when engine manifold vacuum is insufficient to operate the windshield wipers at proper speed. This section is a double acting pump since it is effective on both the upward and downward movement of the diaphragm. The principle parts are shown in figure 3-13.

As previously explained (subpar. b), the rocker arm swings up and down as the engine camshaft rotates. As the arm springs downward it bears against shoulders on the two vacuum links which are pivoted on the rocker arm bushing. The vacuum links swing upward, thereby pushing the vacuum diaphragm upward by means of the connecting rod.

If the 1952 Buick fuel pump is suspected of delivering an improper amount of fuel to the carburetor, it should be inspected and tested on the engine, as follows:

On Series 50-70, check windshield wiper transmission cables to make sure they are correctly attached to wiper motor, are properly located in pulleys on wiper transmissions and cable tensioners, and are not rubbing against anything under the cowl. 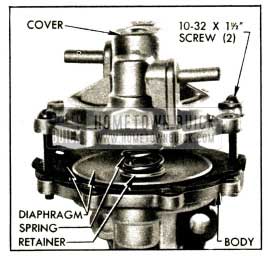 NOTE: The vacuum cover must be removed (subpar. a) before removing the 1952 Buick fuel cover. 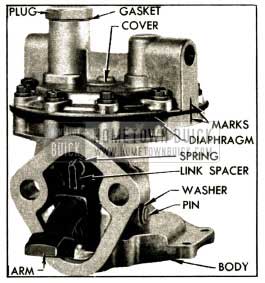 On Type DH (Series 70) pump, remove valves which are held in fuel cover by a retainer and screw. See figure 3-17. 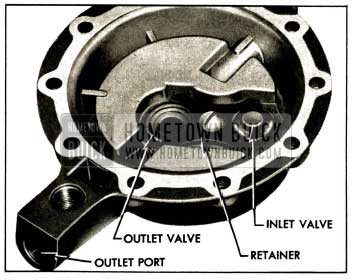 Installation of Rocker Arm and Links

On Type DH (Series 70) pump place retainer over valves with humped side up and install retainer screw. See figure 3-17. 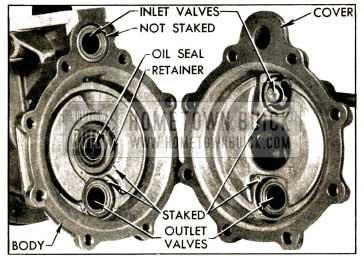 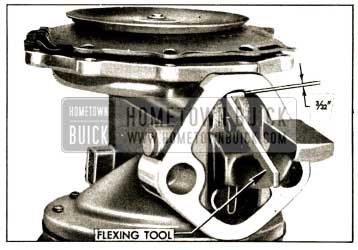 CAUTION: As cover is installed make certain that diaphragm is centralized. If diaphragm is pulled to one side it will cause the diaphragm spring to rub on cover and produce a squeak during pump operation.