SECTION 10-I 1952 BUICK INSTRUMENTS AND CLOCK

The AC charge indicator located in the 1952 Buick instrument cluster is similar to an ammeter; however, the scale is not graduated in amperes, therefore the indicator does not show the amount of current flowing. The current required to move the pointer against the stop is 15 amperes for both charge and discharge. The pointer is provided with a dampener, consisting of Silicon-Jell on the front pivot, to reduce pointer fluctuation when the voltage regulator is functioning.

The AC temperature gauge, located in the 1952 Buick instrument cluster below the charge indicator, is not an electrical instrument. The heat indicator is a vapor pressure type which makes use of a sealed-in liquid, the expansion of which creates a pressure which moves the pointer on the gauge.

The 1952 Buick temperature gauge is a unit assembly consisting of a pressure gauge connected by a capillary tube to a vapor bulb. The vapor bulb is attached by a plug to the right rear corner of the engine cylinder head so that it extends into the cooling water. The heat of the water causes the sealed-in liquid in bulb to expand in proportion to temperature and exert pressure on the gauge in 1952 Buick instrument cluster. The gauge is marked “COLD” and “HOT” and does not show temperature in degrees.

The AC oil pressure gauge is not an electrical instrument. The gauge is the pressure expansion type which makes use of pressure developed by the oil pump acting directly on the mechanism of the gauge in the 1952 Buick instrument cluster. The gauge is connected by a small pipe to the main oil passage in the crankcase near the distributor. Connected at this point, it registers the full pressure of the oil pump.

The time reset knob extends through the glass on front of clock. To reset time, pull knob out and turn as required. See figure 10-105. 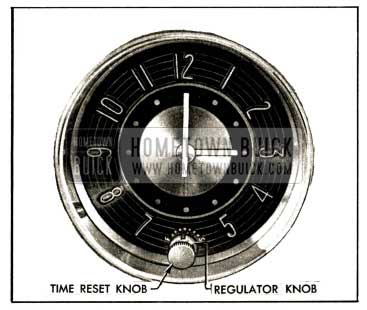 The 1952 Buick clock manufacturers have established Authorized Service Stations in many cities throughout the United States and Canada. These service stations are prepared to carry out terms of the manufacturer’s warranty and also to perform any repairs made necessary through use of clock.

If the 1952 Buick gasoline gauge does not operate properly, the dash unit, tank unit wiring, and tank unit should be separately tested to determine which is at fault. The units and wiring may be tested with AC Gas gauge Tester, Type No. 1, available through AC distributors.

The 1952 Buick speedometer head has a magnetic speed indicator and a gear driven odometer. The trip odometer reset knob is located on lower edge of 1952 Buick instrument panel adjacent to steering column. Pushing the knob up and turning clockwise gives a quick reset; turning knob counterclockwise resets one-tenth mile at a time.

If the 1952 Buick speedometer cable is noisy, or the speedometer pointer wavers, the cable should be inspected for kinks or lack of lubrication. 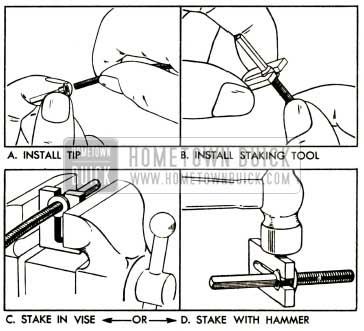 The signal lamp, containing a 15 CP bulb, and a switch are mounted on a bracket attached to the lower edge of 1952 Buick instrument panel just to the right of the brake lever release knob. The signal lamp is connected to the lower terminal of the ignition switch and the lead includes a fuse holder which contains a 6 ampere fuse.

The switch is located so that the brake lever depresses the plunger when the lever is in fully released position. When the parking brake is applied the lever releases the spring loaded plunger so that the switch closes the circuit to ground and the lamp bulb lights.

When brake lever is in fully released position, the signal switch plunger must be depressed 3/16″. Adjustment is made by loosening the mounting bracket screws and shifting the entire assembly as permitted by the slotted screw holes. See figure 10-107. 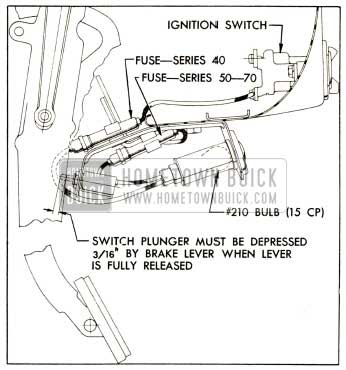