The Stromberg Model 4AUV-267 carburetor used on the Series 70 engine is a 4-barrel downdraft type which provides the advantages of a compound installation of two 2-barrel carburetors in one compact unit. See figure 3-82. To aid description and the proper identification of parts the 1952 Buick Stromberg 4-barrel carburetor is considered to be divided into a primary section and a secondary section. 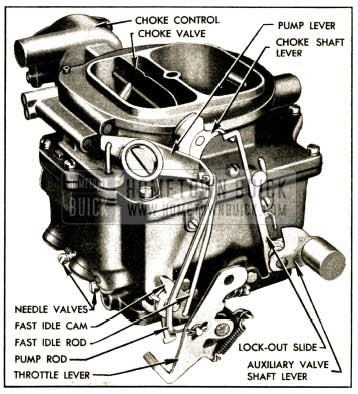 The primary section covers the 2-barrelled forward half of the carburetor assembly. This section is essentially a complete 2-barrel carburetor containing a float system, idle system with adjustable needle valves, main metering system, power system, and accelerating system. This section also includes an accelerator vacuum switch for starting the engine, and the automatic choke mechanism.

The secondary section covers the 2-barrelled rearward half of the 1952 Buick Stromberg 4-barrel carburetor assembly. This section is essentially a supplementary 2-barrel carburetor which cuts in to assist the primary section when a pre-determined car speed or engine load is reached. This section contains a float system, idle system with fixed jets (nonadjustable), and a main metering system. It has a separate set of throttle valves and a set of auxiliary valves, which are located in the barrels above the throttle valves.

The accelerator vacuum switch, which is operated by a lever on the primary throttle valve shaft, is fully described in paragraph 10-33. The other systems of the 1952 Buick Stromberg 4-barrel carburetor are described in the following subparagraphs.

Each section of the 1952 Buick Stromberg 4-barrel carburetor has a separate and independent float system, consisting of a float chamber formed by a partition in the main body, a 2-pontoon: float, needle valve seat and valve. Fuel enters the carburetor through a strainer in the inlet port in the secondary side of the air horn. From this point fuel flows to the separate float chambers through a horizontal passage in the air horn. See figure 3-83. 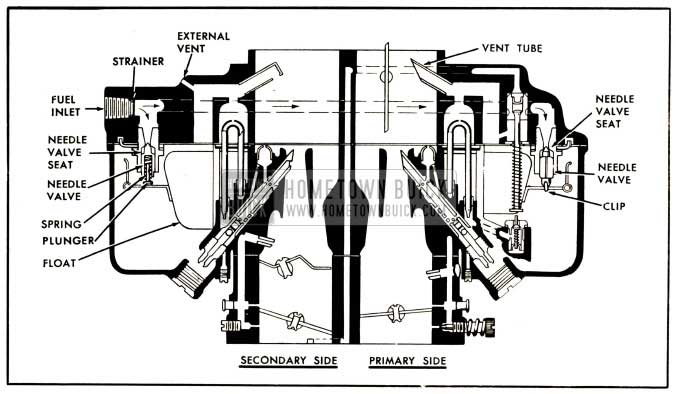 The joint between the air horn and the main body is sealed by a gasket, and the float chambers are vented by passages which are calibrated to provide proper air pressure above the fuel under all operating conditions. These passages in the air horn lead into the air cleaner elbow, into the throat of air horn, and to outside atmosphere. The exterior vents permit fumes to escape from float chambers when the engine is stopped after extremely hot operation.

Each barrel of the 1952 Buick Stromberg 4-barrel carburetor has a separate idle system but the general operation is identical in all barrels. The idle system in each barrel supplies fuel to the engine whenever the position of the throttle valve is such that suction is created at the idle discharge holes in the throttle body.

Suction on an idle discharge hole causes fuel in the float chamber to flow through the main metering jet and upward into the idle tube which meters the fuel. A bleed hole permits air to enter at the top of the idle tube so that a mixture of fuel and air passes down the tube and idle channel to the idle discharge holes. Additional air is drawn into the fuel-air mixture in the idle channel through the secondary air bleed which is in the throttle body in primary section and in the main body in secondary section. See figure 3-84. 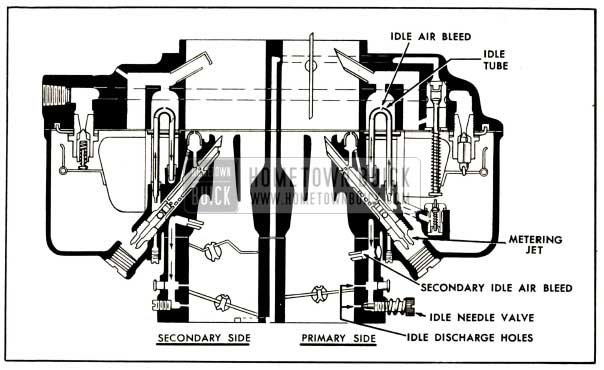 Each barrel of the 1952 Buick Stromberg 4-barrel carburetor has a separate main metering system; however, the operation of all systems are identical. The main metering system in each barrel supplies fuel to the engine whenever the position of the throttle valve is such that the incoming air stream creates suction on the main discharge jet. 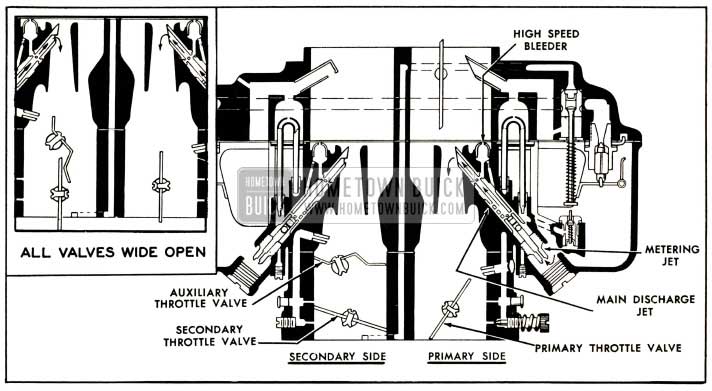 The main metering systems in the primary section control the flow of fuel during the intermediate or part throttle range of operation and up to approximately 80 MPH. The secondary throttle valves remain closed until the primary valves have opened approximately 35-42 degrees, after which they are opened proportionately so that all valves reach the wide open position at the same time. While the secondary throttle valves are closed, the auxiliary valves located above them are held closed by the weight on the auxiliary valve shaft lever (fig. 3-82); therefore there is not sufficient air flow through the barrels to operate the main metering systems in the secondary section.

For maximum power under load or extremely high speeds (85-90) MPH operation, a richer mixture is required than that necessary for normal throttle opening. This additional fuel is provided by one power system connected to the main metering systems in the primary section of the 1952 Buick Stromberg 4-barrel carburetor. See figure 3-86. 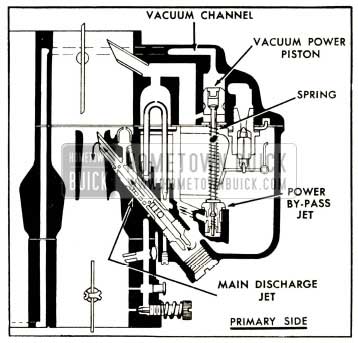 The power piston cylinder in the air horn of the 1952 Buick Stromberg 4-barrel carburetor is connected by a channel to the face of the mounting flange so it is subject to intake manifold vacuum. At part throttle position the vacuum is sufficient to hold the power piston in its “up” position against the tension of the piston spring. When the throttle valves are opened to a point where manifold vacuum drops to approximately 4 to 5¥2 inches of mercury and additional fuel is required for satisfactory operation, the piston spring moves the power piston down to open the power by-pass jet. This allows additional fuel to enter the main discharge jets in the primary section through a channel which by-passes the metering jet. See figure 3-86.

When the throttle is closed, the pump piston moves up and draws a supply of fuel from the float chamber through the inlet strainer, past the inlet ball check valve and into the pump cylinder. When the throttle is opened, the piston on its downward stroke exerts pressure on the fuel which closes the inlet check valve and opens the outlet check valve. A metered quantity of fuel is then discharged through the pump discharge nozzles into each barrel in the primary section of the 1952 Buick Stromberg 4-barrel carburetor. This occurs only momentarily during the accelerating period. The pump duration spring which is compressed by the downward movement of the piston against the resistance of the fuel provides a follow-u p action so that the discharge carries out over a brief period of time. The spring loaded relief valve in the pump piston prevents an excessive build-up of pressure in the system when the throttle is snapped open suddenly, by providing an outlet through the piston for a small quantity of fuel when there is sufficient pressure to open the valve. See figure 3-87. 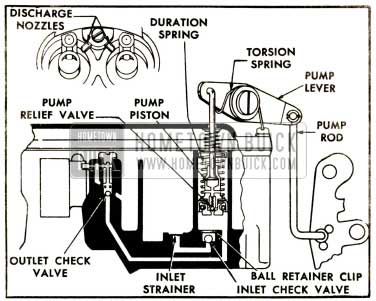 The secondary section does not have a choke valve in the air horn. In order to prevent air entering the carburetor through the secondary side during the engine warm-up period it is necessary to block the movement of the auxiliary valves by means of the lock-out slide shown in figure 3-82. 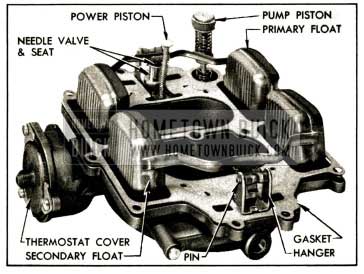 Use Wrench T-25047 to remove nut from choke stem, then remove lockwashers and serrated washer. 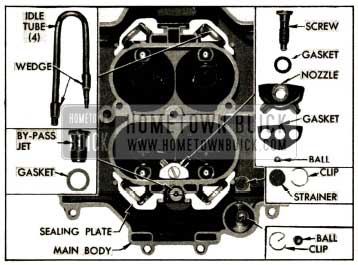 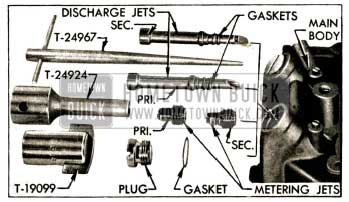 The procedure for cleaning and inspection of parts is the same as the procedure given for the 2-barrel carburetor in paragraph 3-30 (b, c), except that the idle tubes are cleaned by a different method.

Under normal service conditions it should not be necessary to remove the idle tubes because the small plugs in the under side of main body may be removed for thorough cleaning of the idle tubes while installed in main body. 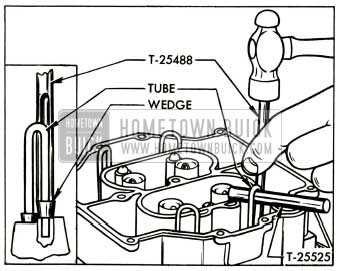 When assembling the 1952 Buick Stromberg 4-barrel carburetor use all new gaskets and any additional new parts found to be necessary during inspection. Calibrated parts must be as specified for carburetor CODE number. 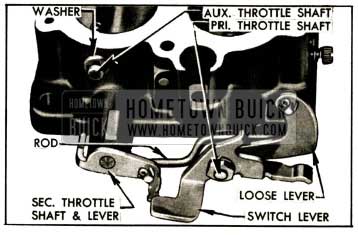 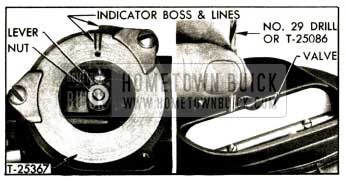 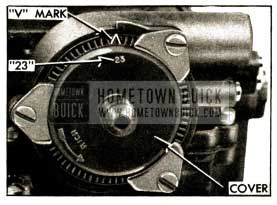 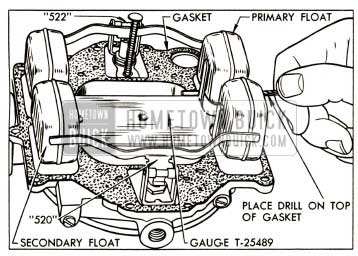 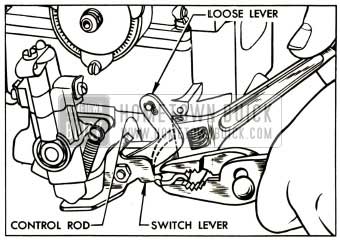 In addition to these adjustments it is also necessary to have proper adjustment of the auxiliary throttle valve lock-out slide which is operated by the choke shaft lever. 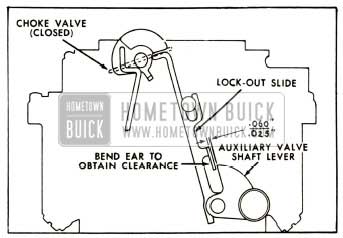 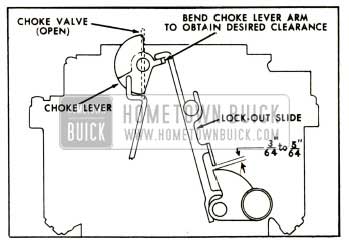