Use a reliable torque wrench to tighten the parts listed, to insure proper tightness without straining or distorting parts. The 1954 Buick rear axle specifications are for clean and lightly lubricated threads only; dry or dirty threads produce increased friction which prevents accurate measurement of tightness.

Limits for Fitting and Adjusting of Parts

NOTE: Limits on fit of parts are for new parts only. “T” means tight and “L” means loose.

1954 Buick Limits for Fitting and Adjusting of Parts 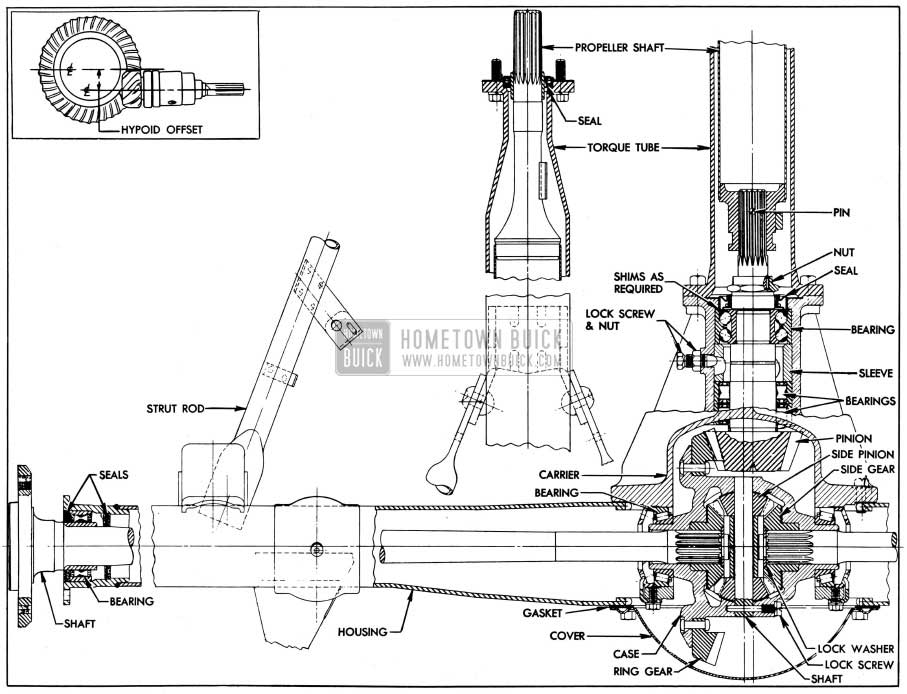 The torque tube encloses a tubular propeller shaft which is rigidly connected to the pinion through a splined joint and a pin. A seal mounted in the torque tube front flange bears against a sleeve pressed on the front end of propeller shaft to prevent passage of lubricant between the transmission and 1954 Buick rear axle. See figure 6-1.

The pinion is supported in the differential carrier by two Hyatt roller bearings (rear) and a New Departure double-row radial-thrust ball bearing (front) which is secured to the shaft by a large lock nut staked in place. A spring loaded seal bears against the lock nut to prevent escape of oil from the rear axle housing into the torque tube.

The pinion and bearing assembly is held in position by a pinion bearing lock sleeve and three cone-pointed lock screws which clamp the double-row ball bearing against a shoulder in the carrier. Shims placed between the bearing and the shoulder provide correct relation of the pinion with ring gear. See figure 6-1.

If a careful test of the car shows that the noise is not caused by external items as described in subparagraph a, it is then reasonable to assume that the noise is caused by the rear axle assembly. The 1954 Buick rear axle should be tested on a smooth level road to avoid road noise. It is not advisable to test rear axle for noise by running with rear wheels jacked up.

Noises in the 1954 Buick rear axle assembly may be caused by faulty rear wheel bearings, faulty differential or pinion shaft bearings, differential side gears and pinions worn, or by a mismatched, improperly adjusted or scored ring and pinion gear set.

Objectionable vibrations at high speed (65 m.p.h. or higher) may be caused by a propeller shaft that is out of balance. Out of balance may be due to a bent shaft or presence of oil in the shaft.

To determine the required engine speed, divide car speed by the transmission gear ratio, using 1.6 for synchromesh or 1.8 for Dynaflow Example: If vibration is most pronounced at 65 m.p.h. in direct drive, the same engine speed would be produced in second gear (synchromesh) at 65/1.6 = 40 m.p.h. or in low range (Dynaflow) at 65/1.8 = 36 m.p.h.