The AAVB Stromberg carburetor used on Series 40-50 engines is a 2-barrel down draft type. See figure 3-56. 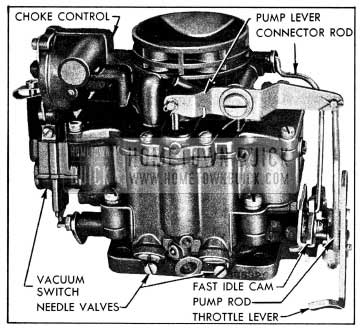 Except as noted above, each barrel forms a complete 1954 Buick Stromberg 2-barrel Carburetor system. Each barrel contains an idle system with adjustable needle valve, a main metering system, accelerating pump discharge nozzle, primary and auxiliary venturi tubes, and a throttle valve. The throttle valves of both barrels are mounted in line on one stem. The dual construction provides the advantages of two carburetors in one compact unit. The dual carburetor and dual intake manifold provides more uniform distribution of fuel to all cylinders than would be possible with one single barrel carburetor. 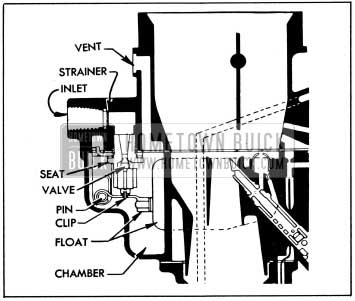 The float chamber is vented externally through a port in air horn to allow fuel to be smoothly withdrawn through the various systems.

The operation of the idle system in each barrel of the 1954 Buick Stromberg 2-barrel Carburetor is identical. Fuel flows from the float chamber through main metering jet and upward through the idle tube which meters the fuel. From the idle tube it flows through a connecting channel where air from the idle air bleeder is mixed with it so that a mixture of air and fuel passes down the idle channel to the idle discharge holes. Additional air is drawn into the fuel air mixture in the idle channel through the secondary air bleeder. See figure 3-58. 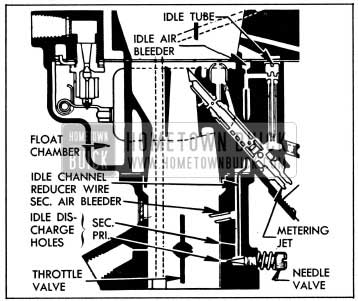 The idle needle valve controls the quantity of fuel that is supplied through the primary idle discharge hole, thereby affecting the final fuel-air ratio supplied to the engine while the idle system is in operation.

The main metering system controls the flow of fuel during the intermediate or part-throttle operation, starting at approximately 20 MPH and continuing up to approximately 75 MPH. 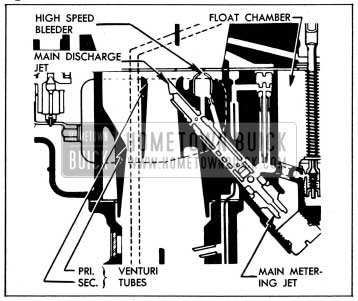 For maximum power or high speed operation above approximately 75 MPH a richer mixture is required than that necessary for normal throttle opening. The richer mixture is supplied through the main metering systems of both barrels of 1954 Buick Stromberg 2-barrel Carburetor by means of the power system.

The power piston cylinder is connected by a channel to the intake manifold. At part throttle position the manifold vacuum is sufficient to hold the power piston in its “up” position against the tension of the piston spring. When the throttle valve is opened to a point where additional fuel is required for satisfactory operation, the manifold vacuum decreases sufficiently so that the piston spring moves the power piston down to open the power by-pass jet. Opening of the by-pass jet allows additional metered fuel to enter the main discharge jets through a by-pass channel without passing through the restricted main metering jet. See figure 3-60. 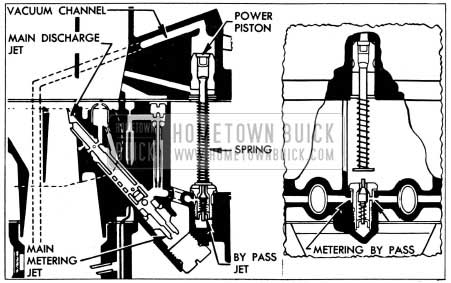 For smooth and rapid acceleration it is necessary to supply an extra quantity of fuel momentarily when the throttle is suddenly opened. This is accomplished by operation of the accelerating pump piston which is directly connected to the throttle valve lever by means of a rod and pump lever. See figure 3-61. 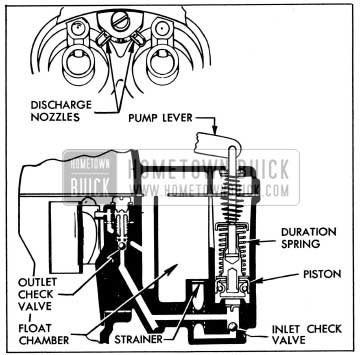 When the throttle is closed, the pump piston moves up and draws a supply of fuel from the float chamber through the inlet check valve into the pump cylinder. When the throttle valve is opened, the piston on its downward stroke exerts pressure on the fuel which closes the inlet check valve, opens the outlet check valve, and discharges a metered quantity of fuel through the pump discharge nozzles in each barrel of 1954 Buick Stromberg 2-barrel Carburetor. This occurs only momentarily during the accelerating period. The pump duration spring provides a follow-up action so that the fuel discharge carries out over a brief period of time.

When the desired speed is reached and the throttle is held in fixed position, the pressure on the fuel in the pump cylinder decreases sufficiently so that the outlet check valve closes and fuel ceases to discharge from the pump nozzles. With the throttle held in a fixed position the fuel flows only through the idle or main metering systems as previously described.

The Stromberg automatic choke consists of a choke valve mounted on a stem or shaft in the 1954 Buick Stromberg 2-barrel Carburetor air horn, a bi-metal thermostat and cover, a vacuum actuated piston located in a choke housing attached to the air horn, a fast idle rod connecting the choke valve to a fast idle cam mounted on 1954 Buick Stromberg 2-barrel Carburetor throttle body.

An upper heat pipe connects the choke housing to a lower heat pipe in the exhaust manifold.

When the engine becomes cold the choke thermostat also becomes cold and increases its spring tension sufficiently to close the choke valve. It is prevented from closing the valve, however, because the throttle stop screw holds the fast idle cam in the slow idle position; consequently, the choke valve is held partially open.

When the accelerator pedal is depressed to start the engine, the throttle stop screw is lifted clear of the fast idle cam and the thermostat then closes choke valve. See figure 3-62 (A).

When the engine starts, intake manifold vacuum causes the piston to partially open the choke valve against the spring tension of thermostat, thereby admitting sufficient air to give a satisfactory running mixture.

When accelerator pedal is released after starting the engine, the throttle stop screw comes to rest against a step of fast idle cam which was rotated to the fast idle position by the closing of choke. This provides proper throttle opening to prevent stalling of the cold engine. See figure 3-62 (A).

As the engine and exhaust manifold warm up, warm air is drawn through the heat pipes into the choke housing by manifold vacuum. This warms the thermostat, causing it to reduce its spring tension on choke valve in proportion to the increase in temperature.

When the engine reached normal operating temperature, the choke thermostat is heated to the point where it no longer exerts any spring tension on the choke valve. The choke valve is in the wide open position and the fast idle cam is in the slow idle position so that the throttle stop screw bears against the lowest step of fast idle cam at closed throttle. See figure 3-62 (C).

If the engine becomes flooded for any reason, the choke valve can be partially opened by depressing accelerator pedal to the full extent of its travel. This causes a tongue or arm on the throttle lever to contact and rotate the fast idle cam, which forces the choke valve open. See figure 3-63 (C). 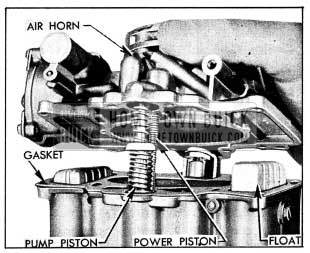 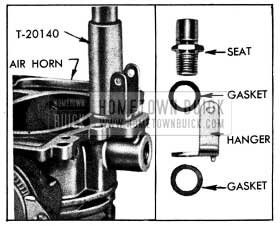 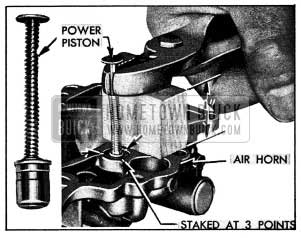 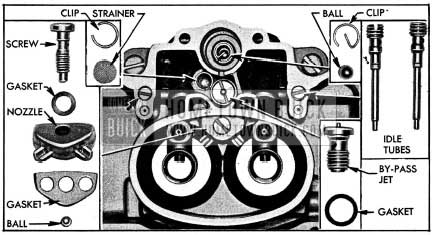 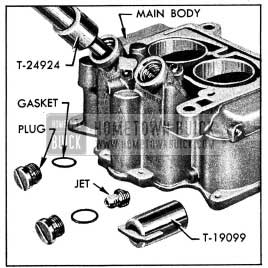 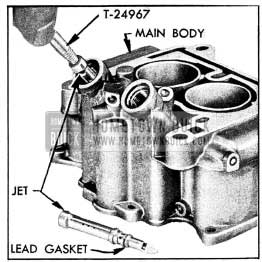 Regardless of the number of new parts that are used in rebuilding a 1954 Buick Stromberg 2-barrel Carburetor, the job in the end will not be satisfactory unless all metal parts are thoroughly cleaned. Because of the nature of 1954 Buick Stromberg 2-barrel Carburetor parts, with numerous small passages subject to fouling with tenacious carbon and gum deposits, ordinary cleaning processes are entirely inadequate. The correct procedure is to use a cleaning bath in which metal parts can be immersed and “soaked” for sufficient time after disassembly to thoroughly clean all surfaces and channels.

Bendix Metalclene has been developed especially for cleaning 1954 Buick Stromberg 2-barrel Carburetors, and is recommended for this purpose. Regardless of the cleaning material used, however, be sure to thoroughly rinse the parts in kerosene, distillate, or white gasoline to remove all gummy deposits that have been softened by the cleaner.

If the passages in main body appear to be heavily fouled with carbon or gum it is advisable to remove the lead ball plugs so that the cleaning solvent can penetrate and wash through the channels. Lead ball plugs may be removed with Plug Remover T-25052, using care not to damage the plug seats in body. See figure 3-71, view A. Install new ball plugs after cleaning is completed, using Plug Set T-25053 to swage plug into its seat. See figure 3-71, view B. 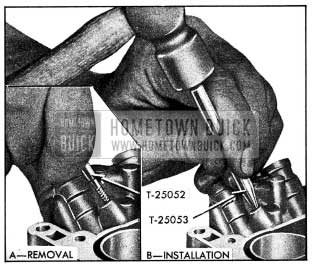 After cleaning, all parts should be carefully inspected for wear or damage as follows:

Check clearance of choke stem in bearings of air horn. If stem or bearings are worn so that excessive clearance exists, replace the worn parts. Make sure that bearings are free of gum.

If thermostat is distorted or damaged it must be replaced with a new thermostat cover with thermostat assembly. The thermostat is not furnished separately because the “V” index mark is stamped on cover after installation of thermostat, to insure proper calibration.

Replace inlet strainer if it is damaged or clogged so that it cannot be thoroughly cleaned, using Retainer Clip Replacer T-25360. Use small end of rod of tool to remove retainer clip. To install clip, place it in tapered end of tool sleeve then use rod inside sleeve to push clip into place. See figure 3-72. 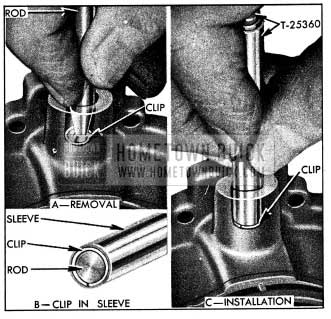 Replace pump strainer if it is damaged or clogged so that it cannot be thoroughly cleaned. Use Retainer Clip Replacer T-25360 as previously explained but use shouldered end of sleeve for installing retainer clip. See figure 3-72.

Test discharge nozzle by sucking or blowing to make sure that all holes are clear. It is advisable to replace pump inlet and discharge channel check valve balls since these parts are small and difficult to inspect.

Inspect check valve ball seats in main body with a good light. If a seat appears rough, place ball in seat and tap lightly to swage a good seat, then discard the ball.

Check the size of the upper idle discharge hole by inserting the shank of the correct size drill. This has the further advantage of removing any foreign matter that may be obstructing the hole. The lower discharge hole for the idle needle valve should be checked in the same manner. For drill sizes see Stromberg Carburetor Calibrations (par. 3-1).

Make sure that the 1/16″ holes drilled through welsh plugs on rear side of throttle body are clear. These holes permit vapors to escape rather than rising into the air cleaner when engine is stopped.

Check wear of throttle stem bearing. There should not be more than about .006″ play, otherwise air leaks will interfere with performance.

Inspect throttle lever and stem assembly for wear on bearing surfaces. Check pump rod holes for wear and also see that lever is not loose on stem. Replace if necessary.

When assembling the 1954 Buick Stromberg 2-barrel Carburetor use all new gaskets and any additional new parts found to be necessary during inspection. Calibrated parts must be as specified for carburetor CODE number. 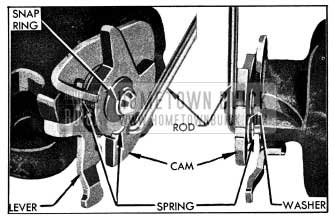 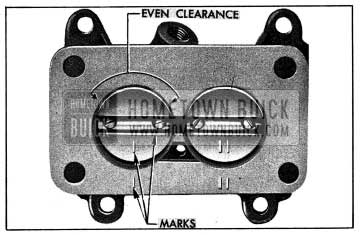 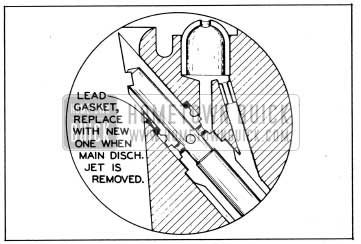 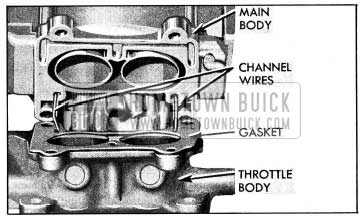