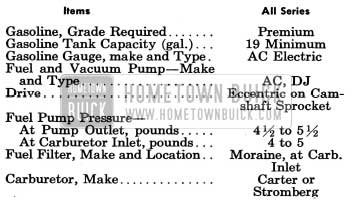 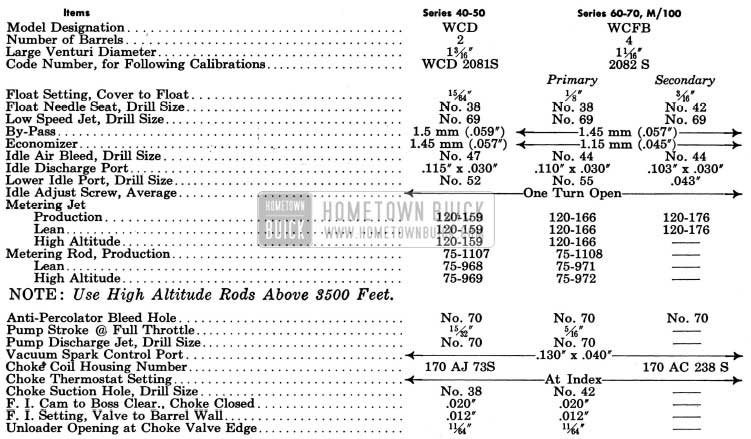 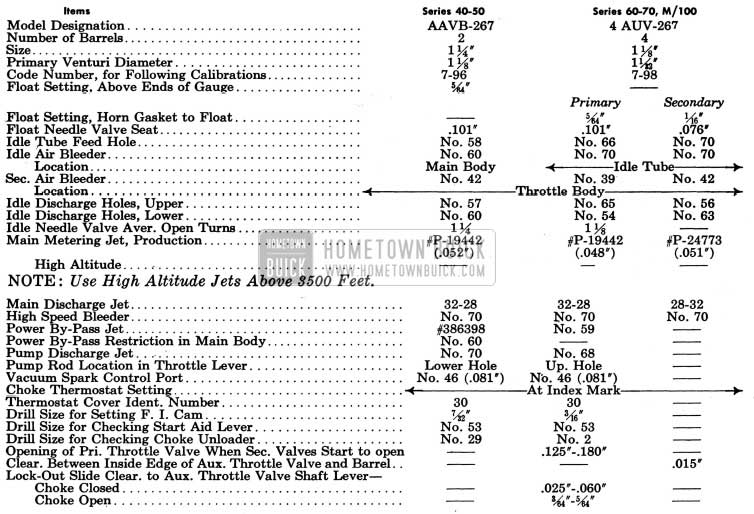 The 1954 Buick gasoline tank is attached by two strap type supports to the body under the trunk compartment, where it is seated against strips of anti-squeak material. Two internal baffles spot-welded to the upper half at centerline of tank at the support seats act as struts to maintain the shape of tank and prevent flexing due to weight of gasoline and pull of the supporting straps.

The feed pipe connects to the gasoline gauge tank unit at top of tank and is supported on the left side of car frame by clips. The front end of feed pipe is connected to the fuel pump by a rubber hose which provides the flexibility required by movement of the engine on its rubber mountings.

The combination 1954 Buick fuel pump and vacuum pump is mounted on the right side of the timing chain cover and is actuated by a hardened, chrome plated, stamped steel eccentric mounted on front side of the camshaft sprocket. The fuel section is mounted above the vacuum section, has extra-large valves, and has a built-in air dome with diaphragm to dampen out pulsations in the fuel stream. The pump construction and operation is described in Section 3-D.

Engines of all 1954 Buick series are equipped in production with either a Carter or a Stromberg down draft type carburetor. Both makes are considered standard and it is not intended that these units be interchanged to provide “optional” equipment.

The 1954 Buick Series 40-50 air cleaner and silencer is mounted on top of the carburetor. Air enters the cleaner first and then passes through the 1954 Buick silencer.

The 1954 Buick Series 60-70 inverted elbow type air cleaner and silencer is mounted lengthwise on top of the engine. Air enters the silencer first and then passes through the air cleaner located directly above the carburetor. See figure 3-1. 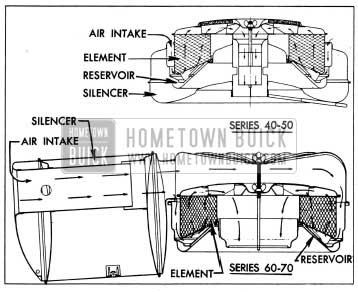 The 1954 Buick air cleaner consists of an oil reservoir and a cleaner element containing a filtering mesh which nests down into the reservoir above the oil level. The reservoir is filled with S.A.E. 50 engine oil to a predetermined level.

Incoming air passes downward through the passage between the oil reservoir and cleaner element, impinges on the surface of the oil and turns upward into the cleaner element. The air carries oil into the element to coat the finely divided filtering mesh. The air thus exposed to a large oil wetted surface to which the dirt and impurities adhere. The cleaned air then passes through the silencer and into the 1954 Buick carburetor. See figure 3-1.

The 1954 Buick carburetor throttle control linkage is designed to provide positive control of the throttle valves through their entire range without being affected by movement of the engine on its rubber mountings. The linkage also serves to operate the accelerator vacuum switch when cranking the engine.

On cars equipped with Dynaflow Drive, a dash pot is mounted in position to be contacted by an arm of the carburetor throttle lever as the throttle lever closed. The dash pot cushions the closing of throttle valves to prevent sudden shut off which might cause the engine to stall when the accelerator pedal is suddenly released. The dash pot is an atmospheric type in which a diaphragm and calibrated by-pass controls the closing of the throttle valves. It is sealed at assembly and is serviced as a unit only. 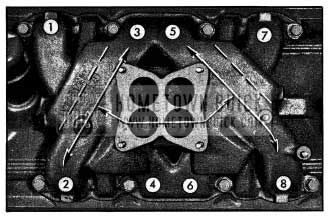 The 1954 Buick intake manifold is heated and hot spots are provided at the T-junction dividing points by crossover chambers cast along the outer walls of each end branch. These chambers connect to the two middle exhaust passages in each cylinder head. See figure 3-3. Hot spots located at the dividing junctions aid in vaporizing the heavier particles of fuel which are swept against the outer walls due to their greater momentum. The heated intake manifold also aids in obtaining a uniform fuel distribution. 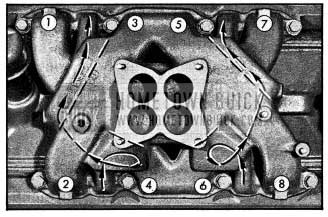 A 1954 Buick heat control valve with a bi-metal thermostat is located in the left exhaust manifold. See figure 3-4. 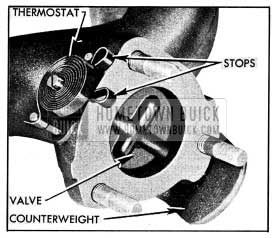 Each cylinder exhausts through an individual port into a separate branch of the 1954 Buick exhaust manifold, which is mounted on the outer side of each cylinder head. Use of individual exhaust ports instead of the customary “Siamese” type of porting permits valve timing that improves engine efficiency, minimizes exhaust valve burning, and effects more complete scavenging of exhaust gases from cylinders.

The left exhaust manifold contains the valve which controls the supply of heat to the intake manifold, as described above (subpar. a). The right exhaust manifold contains an alloy steel heating tube which is connected by an insulated pipe to the automatic choke thermostat housing. The heat tube is mounted horizontally inside the manifold with the entrance end opening into a heating chamber located on the outside of manifold.

Both 1954 Buick exhaust manifolds discharge into one front exhaust pipe. This pipe crosses under the front of engine from the left manifold to meet with the right manifold in a “Y” joint that provides a common, low-restriction connection with the rear exhaust pipe attached to the muffler on right side of the frame.

The 1954 Buick muffler is an oval-shaped, dynamic flow type having very low back pressure. It is double wrapped of heavy gauge sheet steel with a layer of asbestos placed between wrappings to aid in reduction of noise transfer and prevents any “oil-canning” effect. The 1954 Buick muffler and exhaust pipes are supported by free hanging, rubber-fabric mountings which permit free movement but eliminate transfer of noise and vibration into the passenger compartment.