When the 1954 Buick horn button contacts are closed, a small amount of current flows through the relay winding to ground at the horn button. This magnetizes the relay core, which attracts the flat steel relay armature. The armature has a contact point which makes contact with a stationary point to close the horn circuit. When 1954 Buick horn button is released, current stops flowing through relay winding so that the core loses its magnetism; the armature spring then causes contact points to be separated.

The monogram and bezel assembly is held in the steering wheel cap base by three springs. The assembly may be removed by inserting a small screw driver in a notch provided in the cap base and prying against the bezel. When the monogram and bezel assembly are removed, the operating ring and wheel base assembly may be removed by removing the three screws which attach the wheel base to the steering wheel hub.

The 1954 Buick horn button used with the solid spoke steering wheel has a cap with a rubber retainer in its rim which snaps over the rim of a contact cup mounted in the wheel hub. The cap may be pried out with a thin bladed tool and the contact cup and other parts may then be removed by removing the three attaching screws and insulating spacer bushings.

When 1954 Buick horns fail to blow .first check wiring circuit (par. 10-12, c) before attempting to adjust horns. If horns are at fault, or tone is poor, adjust each horn for specified current draw as follows:

Increasing the current draw increases the horn volume. Too much current will produce a high cut-in voltage, which will cause a sputtering sound and may cause horn to stick in cold weather.

Three checks and adjustments are required on the 1954 Buick horn relay: air gap, point opening, and closing voltage. These should be made in the following order: 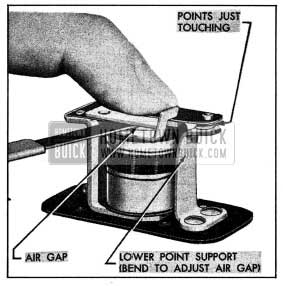 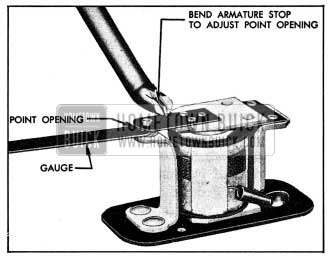 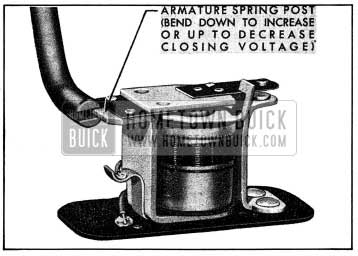 When the direction signal lights are flashing, a signal indicator bulb on instrument panel also flashes, producing a small arrow of green light to indicate the direction for which the signal has been set.

The 1954 Buick direction signal switch and its operating mechanism are enclosed in a switch housing on the steering column just below steering wheel.

The switch is operated by a lever projecting from the left side of switch housing. Moving the operating lever clockwise sets the switch to indicate a right turn and moving lever counter clockwise indicates a left turn. 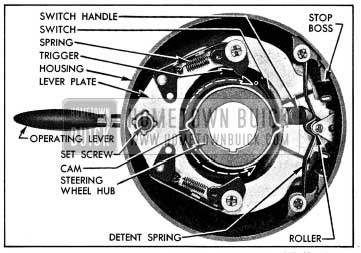 The trip mechanism for returning the switch to the “off” position after a turn is completed consists of a cam on the steering wheel hub, and two spring loaded triggers mounted on the lever plate. The cam is a round steel stamping having two projecting ribs, and it is rigidly mounted on the wheel hub. When the switch is in the “off” position, the lever plate is centered around the cam so that the ribs of cam cannot contact either trigger when steering wheel is turned. See figure 10-79.

When the operating lever is moved clockwise to set the switch for a right turn the lever plate is moved down, thereby moving the switch handle down and also bringing the upper trigger into the path of the cam ribs. As the steering wheel is turned right and a cam rib contacts the trigger, the trigger rotates to permit the cam rib to pass without interference. The coil spring then returns the trigger to its original position. See figure 10-80. 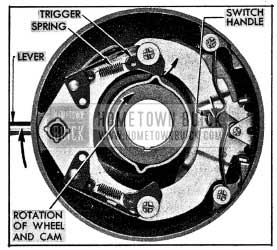 As the steering wheel is turned left at completion of the right turn the cam rib again contacts the trigger, which is prevented from rotating out of the way by a flat spring mounted on the lever plate. The cam rib pushes against the trigger to move the lever plate and switch back to the “off” position. See figure 10-81. 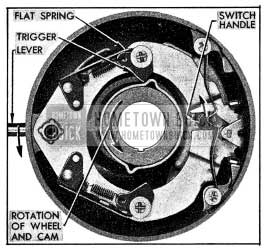 The flat spring cushions the shock as the cam rib contacts the trigger, and it would also permit the trigger to rotate out of the way and let the steering wheel turn in case anything held the lever and plate from returning to “off” position.

The same action takes place when the switch is set for a left turn, except that the lever plate is moved up to bring the lower trigger into contact with the cam. If the switch is erroneously set to indicate a turn in one direction and the turn is made in the opposite direction, the opposite rib of cam will contact the trigger and return the switch to “off” position as the wrong turn is started.

Since the direction signal lights are independent of the headlamp lighting switch and thermo circuit breaker, the wiring circuits are protected by a “Direction Signal” fuse on the fuse block under the cowl. The Tungsol flasher is also mounted on the fuse block, which serves as a terminal block between the signal switch and the chassis wiring.

The direction signal lights are independent of the parking and stop light circuits, and the indicator lamp bulb sockets are grounded to the instrument panel. See paragraph 10-51 (subpar. f) for replacement of indicator lamp bulbs. 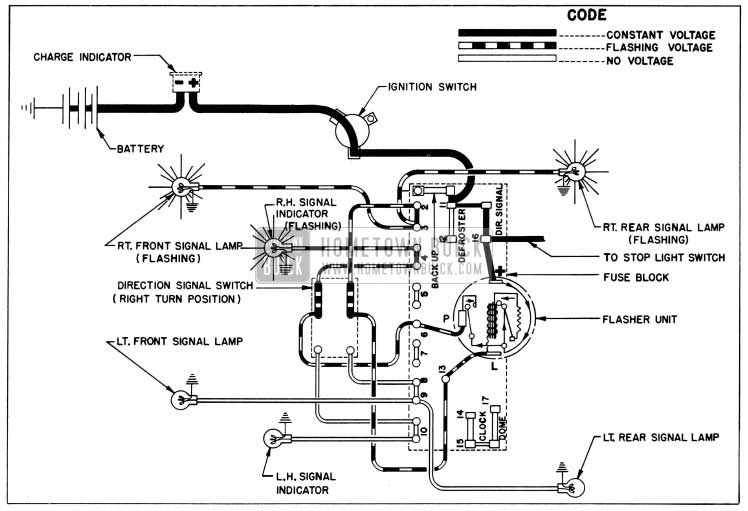 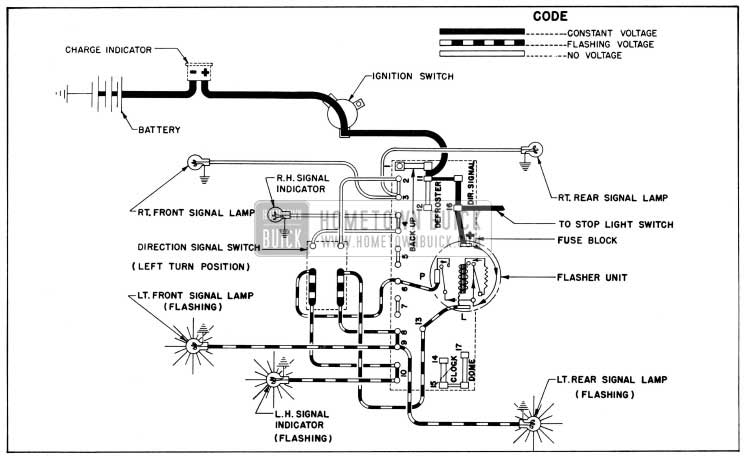