When removing LEFT cylinder head (1) Disconnect temperature gauge tube (2) Remove power steering gear pump with mounting bracket, if present, and move it back over the ventilator duct with hoses attached. 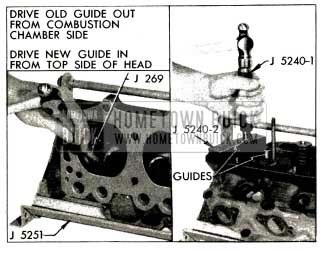 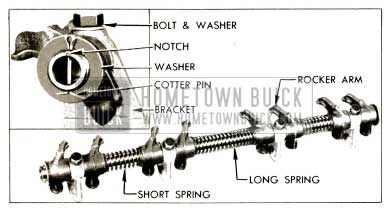 Make certain that gasket surfaces and all parts are absolutely clean, then install 1953 Buick cylinder head by reversing the procedure for removal, paying particular attention to the following points.

Cleaning Tank J 5093 is designed to permit a systematic and thorough cleaning of hydraulic valve lifter parts. It provides three compartments for clearing fluids, two 16-compartment cleaning trays, one small tray for special tools and a removable cover. The two cleaning trays allow one set of lifters to be soaking while another set is being worked on. The cover, placed on bench in front of tank, provides an easily cleaned working surface. See figure 2-21. 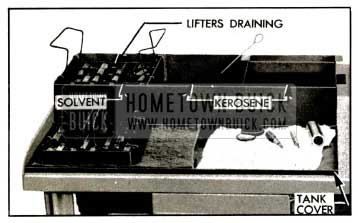 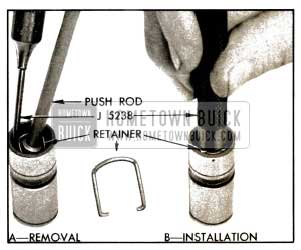 If a plunger sticks in lifter body place lifter in large end of Plunger Remover J 4160-A, with plunger inward. While holding lifter with thumb, rap the open end of remover against a block of wood with just enough force to jar the plunger from body. See figure 2-23. 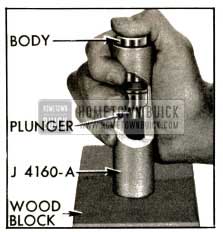 NOTE: To insure absolute cleanliness of a reconditioned 1953 Buick lifter assembly, it is advisable to inspect, check ball travel, and assemble each (lifter subpar. d, e, f) before cleaning the next lifter. 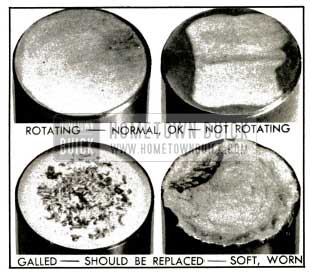 It is very important to check the travel of the 1953 Buick check ball and to bring it within prescribed limits before the lifter is assembled. Too much ball travel will allow excessive flow of oil from the lifter lower chamber just before the ball seats, causing excessive lash in the valve linkage. Insufficient ball travel will cause the volume of oil in the lower chamber to increase or “pump up,” thereby preventing the engine valve from seating.

All parts must be absolutely clean when a 1953 Buick hydraulic lifter is assembled. Lint and dust may adhere to the parts if they are blown off or wiped with cloths; therefore they should be rinsed in CLEAN kerosene and assembled without drying. 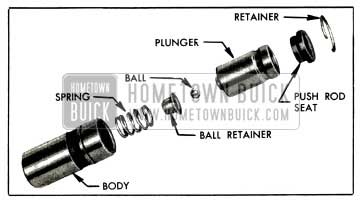 After a 1953 Buick hydraulic lifter has been cleaned, inspected, checked for ball travel, and assembled it must be tested before it is installed in an engine. Lifter Test Fixture J 5095 has been designed to test the leakdown rate of a lifter to determine whether it is within limits which assure satisfactory lifter operation.

Fixture J 5095 must be permanently converted to accommodate the 1953 valve lifter by installation of the new gauge rod shank, dial plate, and pointer assembly provided in Conversion Kit J 5181-A. Instructions for installation of new parts are contained in the conversion kit. 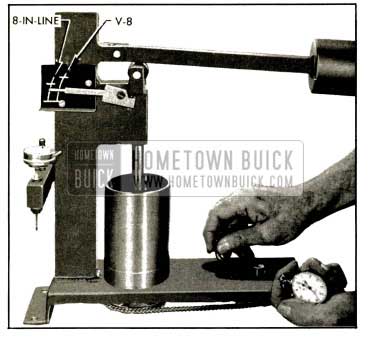 Make certain that 1953 Buick valve lifter guide holes and adjacent area of 1953 Buick cylinder block are clean, then oil and install valve lifters. Each lifter must slide freely in its guide hole; if a lifter is tight in one guide hole fit it to another hole. 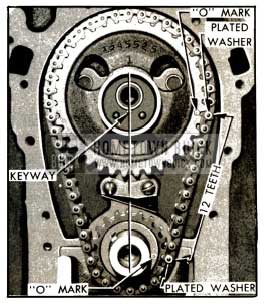 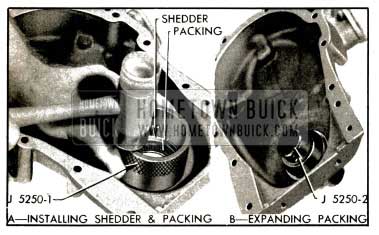 The five steel-backed Babbitt-lined camshaft bearings are pressed into the crankcase. Going from front to rear, each bearing is bored .030″ smaller than the preceding bearing, and each camshaft journal is correspondingly reduced in diameter.

The 1953 Buick camshaft bearings must be line reamed to size after being pressed into the crankcase. Since this operation requires special reaming equipment the original bearings should be retained unless severely damaged. Slightly scored camshaft bearings will be satisfactory if the surface of camshaft journals are polished and bearings are cleaned up to remove burrs, and the fit of shaft in bearings is free and within the clearance limits of .0015″ to .004″.