The 1953 Buick radio installation consists of a receiver set with built in speaker mounted at the center of the instrument panel, and a sectional antenna mounted just above the center of windshield on all models except 76 X. Model 76 X has an electrically operated antenna mounted in a fender. The Selectronic radio installation also includes a foot control switch mounted on the toe panel to left of the brake pedal. Some installations may also include a separate speaker mounted on the shelf behind the rear seat.

The 1953 Buick Sonomatic radio receiver has five push buttons for touch-tuning of five pre-selected stations. In addition to the push buttons, a control knob permits manual selection of other stations.

The 1953 Buick Selectronic radio receiver contains an automatic signal-seeking tuner by which the operator can change stations by merely depressing the single selector bar on the receiver, or the foot control switch on the toe panel. The seeking operation is a uni-directional sweep of the broadcast band from low to high frequency with nearly instantaneous return. The tuning mechanism is driven by a spring loaded mechanical motor which is stopped on station by a triggering circuit actuated by voltage developed from an incoming signal. The number of stations on which the tuner will stop can be regulated by use of the sensitivity control knob on the receiver. In addition to the automatic tuning, a control knob permits manual selection of stations if desired.

The antenna (except Model 76 X) may be rotated from the “down” to the “upright” positions by turning the control knob located just above center of windshield. The rod extensions must be extended or retracted by hand, working on outside of body. The antenna is hinged so that it will not ordinarily be damaged when coming in contact with low hanging limbs or other obstructions. Locally strong stations can usually be tuned in with antenna in the down position; locally weak stations will require the antenna to be raised upright and fully extended.

Model 76 X (Skylark) is equipped with an electric motor driven antenna mounted in the left front fender. See figure 11-11. The motor drives two friction pulleys against a nylon tape attached to the upper section of the antenna. A two-position toggle switch on lower edge of instrument panel controls the motor, which will run in either direction. Lifting the switch handle raises the antenna and pushing handle down lowers the antenna. When handle is released it returns to “Off” position.

CAUTION: The 1953 Buick radio should be turned off while starting the engine because certain radio parts may be damaged if cranking motor is operated with radio turned on.

Clockwise rotation of the switch knob, to left of dial, turns the radio on, and further rotation increases the volume. Rotation clockwise of the tone control knob, behind the switch knob, to extreme “treble” position gives the full tone range which will reproduce speech very clearly and distinctly. Rotation counterclockwise toward “bass” diminishes brilliance and accentuates low notes. See figure 11-6.

NOTE: To insure adequate sensitivity for selective tuning of the 1953 Buick Selectronic radio it is necessary to have antenna in upright position and fully extended.

With the 1953 Buick radio turned on, selective tuning of available stations is accomplished by depressing either the selector bar above the dial (fig. 11-6), or the foot control switch on toe panel to left of the brake pedal.

The number of stations on which the tuner will stop in selective tuning can be regulated by manual setting of the sensitivity control knob, which is located behind the manual tuning knob to right of the dial. See figure 11-6. This is a step control having four positions. This control is in the circuit only while the tuner is seeking and does not affect the “on station” sensitivity of the receiver.

If the Selectronic tuner is operated in certain localities or in certain types of buildings where a strong signal is not available, the tuner will automatically search the band from one end to the other without stopping until the sensitivity control knob is turned clockwise to include more stations, or until the 1953 Buick radio is turned off.

On 1953 Buick Sonomatic radio, if the program sounds screechy or distorted, it is probably caused by improper tuning and can be corrected by adjusting the tuning knob slightly. Since the low notes are more affected by tuning than the high ones, it is a good plan to tune the set to a point where the low notes are heard best and high notes are clear but not screechy. Turning the control knob back and forth until the station is almost lost on either side will enable the operator to hear the difference in reception and select an intermediate position giving best results.

The trouble diagnosis information in this paragraph is of a non-technical nature. It is intended as an aid in locating minor faults which can be corrected without a specialized knowledge of radio and without special radio test equipment. If the suggestions given here do not affect a correction, further testing should be done only by a trained radio technician having proper test equipment.

1953 Buick Radio Is Inoperative or “Dead”

Lead-in wire may be checked for “grounds” by removing lead-in cable connector from radio receiver and checking with an ohmmeter from connector tip to car body. This check should show an entirely “open” circuit. CAUTION: Do not check with a lamp or any device drawing current, since the conductor inside loom is only .010″ in diameter and will burn off easily if grounded.

An antenna trimmer adjustment is provided for matching the antenna coil in the receiver to the car antenna. This adjustment must always be made after installation of receiver and antenna, or after any repairs to these units. The adjustment should also be checked whenever the radio reception is unsatisfactory.

To install outer knobs simply push them on shafts as far as possible. To remove either knob, insert a small screwdriver in slot on edge of knob and pry against the flat spring located inside the knob. 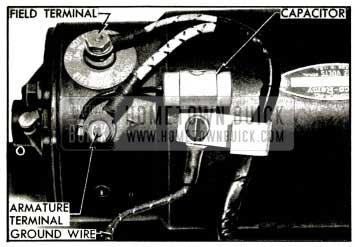 In addition to the items mentioned above, a bond strap is connected between the engine and cowl. On Series 40, the bond strap is attached to the temperature gauge tube. On Series 50-70, it is a separate strap on right rear corner of engine.

If 1953 Buick rear seat speaker is removed for any reason, be sure to reinstall the speaker, rubber gasket, grille screen, and bezel as shown in figure 11-8. 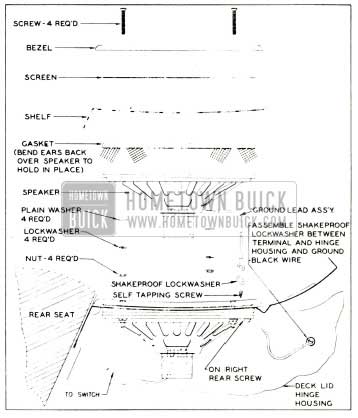 Place one terminal of the black ground wire under the 1953 Buick right rear speaker mounting nut. The other end of ground wire is attached to the right trunk lid hinge guard with a screw and a shake proof washer placed between terminal and hinge guard. 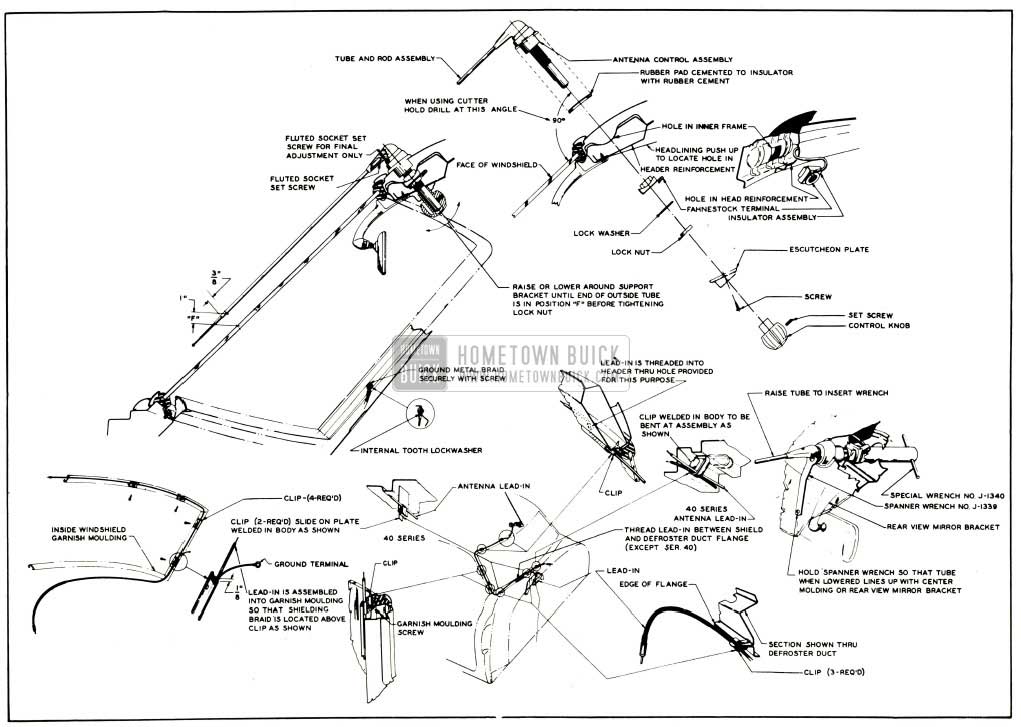 NOTE: If there is any doubt of the location of the Fahnestock terminal the lead-in wire should be checked for “grounds” with an ohmmeter. It should, of course, show an entirely “open circuit.” Do not check with a lamp or any device drawing current as the conductor inside of the loom is only .010″ in diameter and will burn off easily if grounded. For the same reason, care should be taken to see that the bare terminal on the end of the plug does not touch any “hot” terminal behind the instrument panel.

Installation details for other convertible and Riviera models are clearly shown in figure 11-10. The installation procedure is very similar to that on closed bodies (subpar. d) except for the following points: 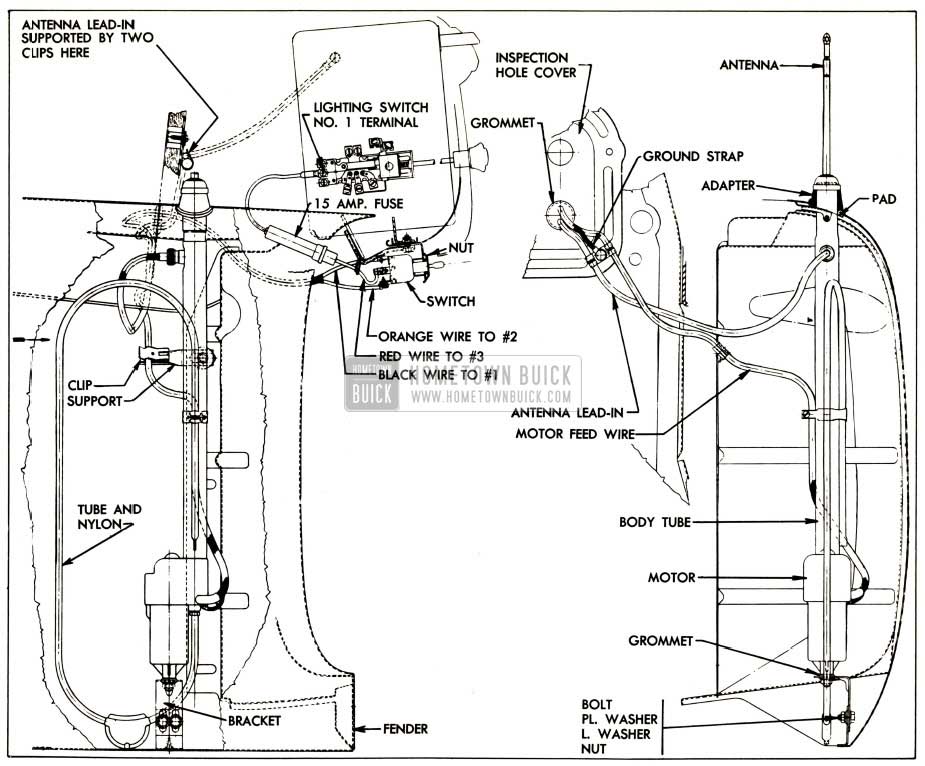 Figure 11-11 shows all necessary details for reinstalling the motor driven antenna in Model 76 X. When the antenna is being installed on a new fender it will be necessary to make a template from the old fender in order to properly locate and cut the hole for antenna body tube. A template may be obtained from an antenna parts package, if available.

Service parts for 1953 Buick radios are marketed through United Motors Service and are listed in the following U.M.S. auto radio bulletins

The 1953 Buick radio receiver should be functioning before the various aligning adjustments are made. Trouble shooting, if necessary, should precede the final adjustment. Under no circumstance should alignment be attempted without calibrated test oscillator and output meter, or by untrained personnel.

The following alignment procedures must be rigidly adhered to and all adjustments must be made in the order given.

**L is the pointer adjustment screw which is on the connecting link, between the pointer assembly and the parallel guide bar. It should be adjusted so that the dial pointer corresponds with the 1000 KC mark on the dial. (On first “0” of “100.”)

With the radio installed and the car antenna plugged in adjust the antenna trimmer “G” for maximum volume with the radio tuned to a weak station between 600 and 1000 KC (see sticker on case). 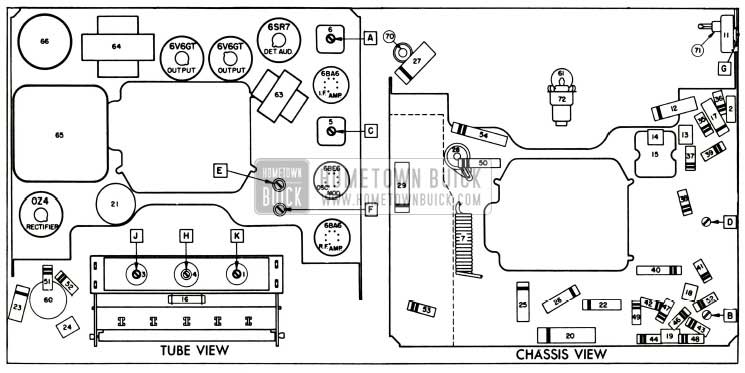 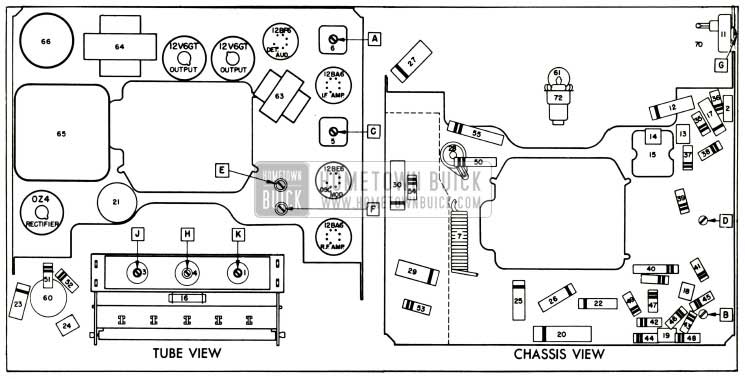 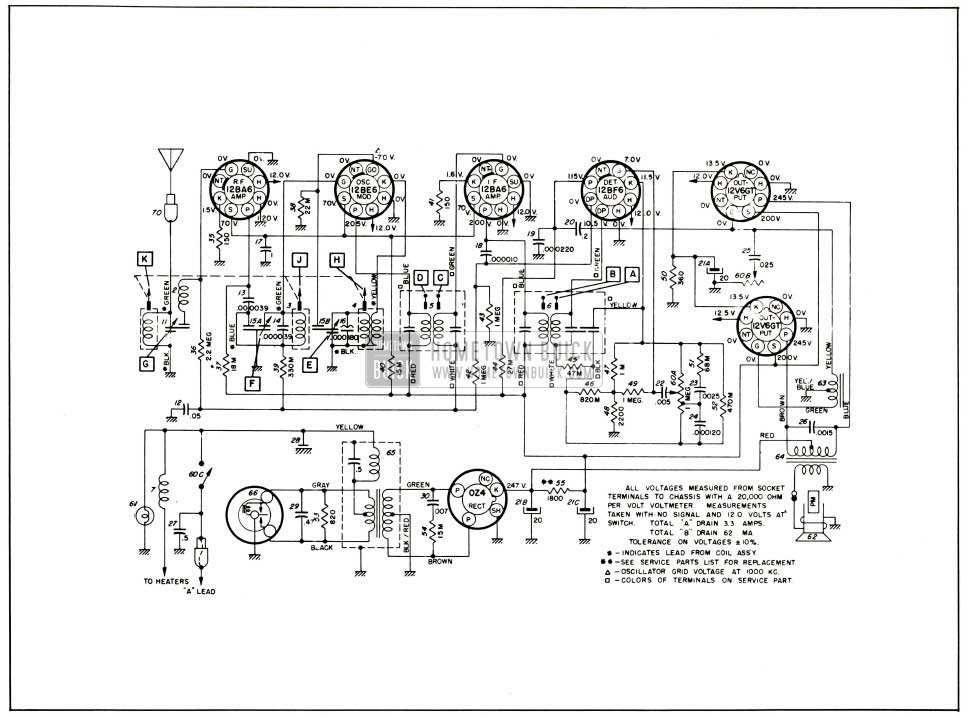 This procedure applies only to the Model 981323 (12-volt) radio. See figure 11-17 for location of the adjustment screws indicated.

NOTE: When aligning, be sure to use a vacuum tube voltmeter as indicated and be sure to follow the alignment sequence given-(Notice that the primary of the 2nd. I.F. is aligned first).

***”L” is the pointer adjustment screw on the end of the core guide bar-adjust so pointer reads 1000 KC. 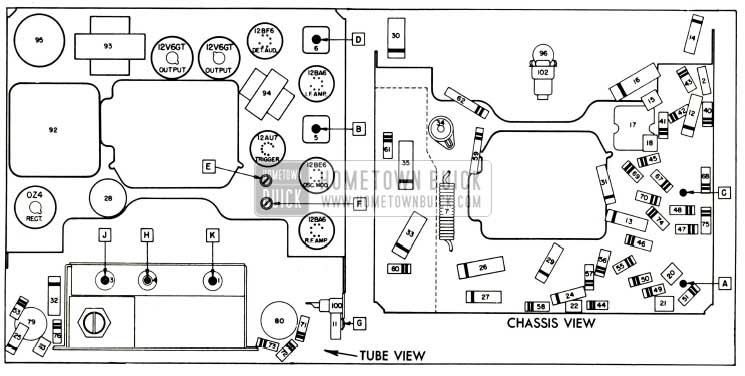 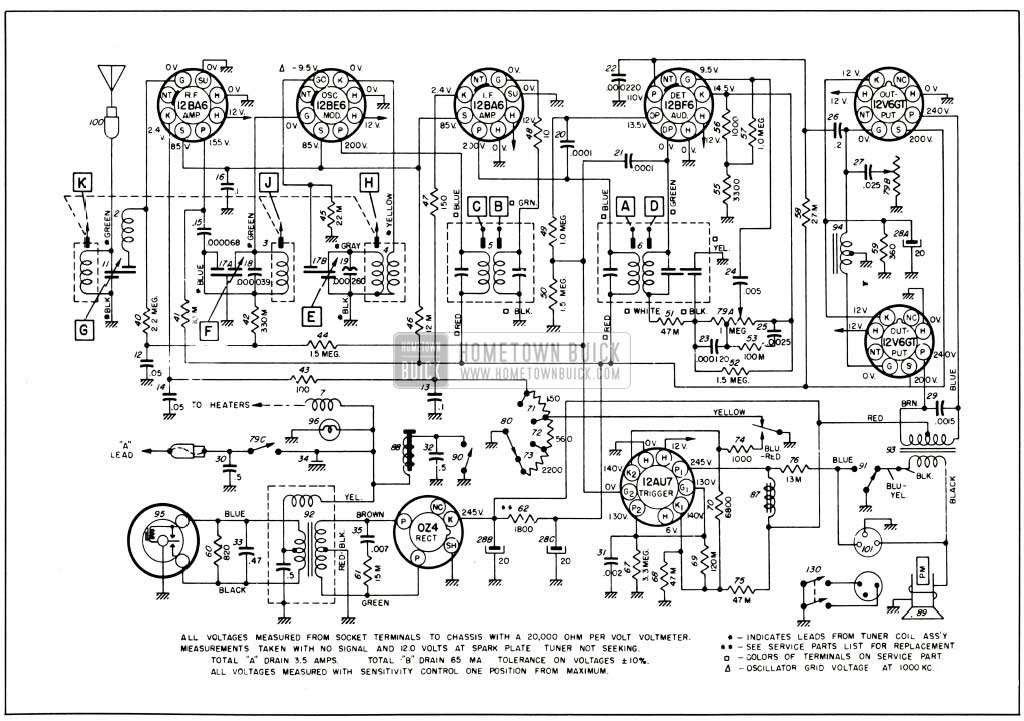