All parts are joined together in an assembly that may be removed and installed as one unit, or the separate parts may be replaced without difficulty. The front end of the 1953 Buick sheet metal assembly is supported and stabilized by attachment of the fender skirts to the frame side rails by means of bolts provided with rubber shims similar to body mountings. See Figure 12-1. 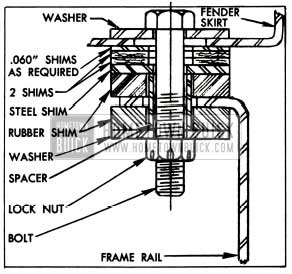 The 1953 Buick hood panel is of one-piece construction which is strengthened and held to shape by front and rear transverse reinforcements of stamped sheet steel. The 1953 Buick front end is also strengthened by two lateral braces.

The 1953 Buick rear end of the hood is attached to the body cowl on each side by hinge assemblies which permit the front end of hood to be raised, alligator type. A heavy coil spring on each hinge assembly assists in raising the hood and holds it up when in the open position. The springs exert a downward pull when hood is in closed position. See Figure 12-2. 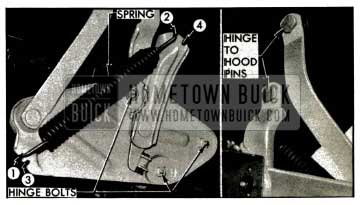 The 1953 Buick front end of hood is locked down by a dovetail bolt on hood which engages a lock lever in the latch mounted on a panel of the front end sheet metal assembly. Proper tension on the latching parts is maintained by a spring and retainer which surrounds the dovetail bolt. 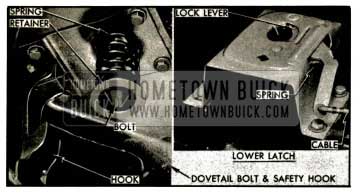 The 1953 Buick hood is unlocked by pulling a knob located at lower left side of instrument panel. The knob operates a control cable attached to the lock lever in the latch assembly. A safety hook mounted on the hood must then be pulled forward before the hood can be raised. See Figures 12-4. 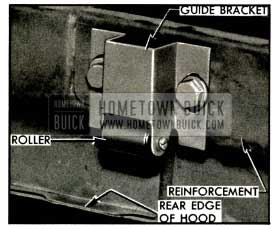 A roller type guide mounted on the rear hood reinforcement at center contacts a guide pad mounted on the body cowl to provide proper clearance between hood and cowl when hood is raised and lowered. See Figure 12-4.

The 1953 Buick hood and front fenders must be aligned with each other on every car to take care of slight variations in form and dimensions of the individual parts. 1953 Buick sheet metal parts stamped in a given set of dies will vary somewhat in form and dimensions due to variations in the hardness of different batches of sheet metal, which cause the stampings to spring in varying amounts when released from the dies.

The 1953 Buick hood and front fenders are properly aligned during the installation at the factory; however, some readjustment may be required after a car has been shipped or has been in service for some time. This is because 1953 Buick sheet metal parts may take a different “set” as a result of vibration and shock incident to shipping or operation during the break-in period. In judging the need for readjustment it must be understood that exactly uniform fit and spacing cannot be obtained on all cars of a given model.

If the hood squeaks, check with 1/16″ thick feeler all around the hood for clearance at radiator grille frame, fenders and cowl. If an edge of metal is making contact at any point where clearance should exist a bright metal spot will usually be found. Such spots may be depressed by spring hammering to provide clearance.

With front doors closed there should be no metal-to-metal contact between doors and rear ends of front fenders. Check for clearance at frequent points, using a strip of fibre or other soft material 1/32″ thick.

Before making any adjustment of 1953 Buick sheet metal to provide necessary clearance at points mentioned, first make sure that front doors are properly aligned in the body openings as described in paragraph 13-7 in the 1952 Buick Shop Manual.

On Series 40 if fender and door panel surfaces are not reasonably flush correction may be made by adding or removing plain washers between the fender support and the cowl panel. On Series 50-70, adjustment of fender with reference to door panel may be made by loosening the fender attaching bolts at fender support and rocker panel. This will permit movement of fender in or out, forward or rearward. Fenders must not be moved so much that proper alignment of hood is affected.

Improper spacing or interference between hood and doors may be corrected by hood hinge adjustment.

When closed and locked, the hood should bear firmly against the rubber bumbers on radiator grille frame and the rubber lacing attached to the cowl ledge.

If the front end of the 1953 Buick sheet metal assembly is too high or too low, resulting in objectionably unequal vertical spacing between front fenders and doors, it will be necessary to change the shims located under the supports on front fender skirts. Adjustment of shims also may be required if the front end of the sheet metal assembly is tilted to right or left so that proper alignment of hood and fenders cannot be obtained by hood adjustment.

At the point where each front fender skirt support is attached to frame rail a rubber shim is placed on each side of the frame rail top flange, with a steel washer 1/8″ steel shim and tubular spacer placed to control compression of the rubber shims as the bolt is tightened. Two steelbestos shims are placed between the 1/8″ steel shim and the fender skirt. When additional shimming is required one or more extra steel shims .060” thick are placed between the steelbestos shims and the fender skirt. See figure 12-1.

Oversize holes in cowl and a slotted hole in hinge plate permit movement of the hinge and hood in any direction required to obtain proper alignment of hood with adjacent parts. To reach the two lower hood bolts it is necessary to remove the cowl trim (kick) pad.

The guide bracket should be set so that the rear edge of hood will have good clearance with the cowl as hood is raised and lowered. It should not be set so far back, however, that hood will stick and tend to buckle at rear edge as it is raised. 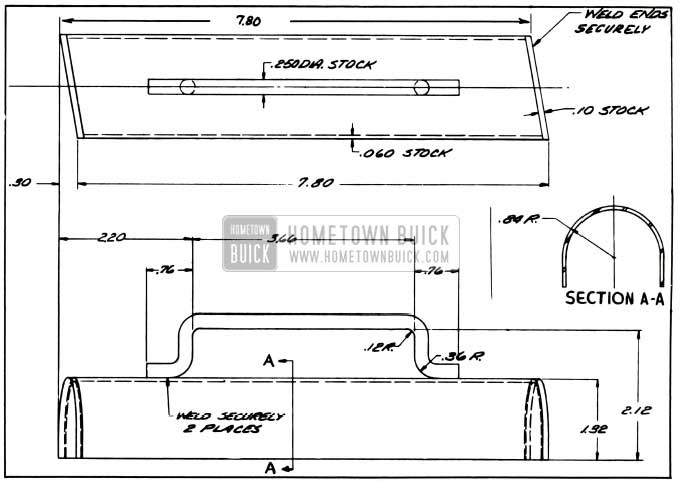 Figure 12-5 shows details of a tool for removing and installing hinge springs. The tool should be made locally, making sure that all metal is of indicated thickness for necessary strength, that ends are of indicated angle to avoid possible slippage out of spring, and that ends are soundly welded in place. 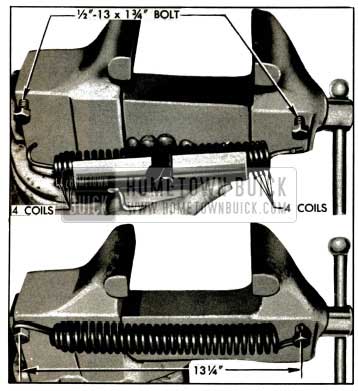 Figure 12-6 shows a vise equipped with two bolts to be used for loading and unloading the spring in removal tool. Drill and tap 5/8″ deep for two 1/2″-13 bolts 1 3/4″ long. Bolts should be located on the stationary and movable jaws so that the distances between them may be changed from 9 1/2″ to 13 1/4″ by opening the vise.

If both hinge springs are being installed, the springs may be engaged in different notches to suit individual preferences for “pull down” and ease of raising hood, as follows:

If the 1953 Buick hood latch control becomes inoperative or it is necessary to open the hood when car doors are locked, the hood latch may be operated with screwdriver as shown in figure 12-7. 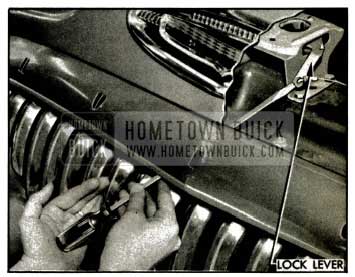 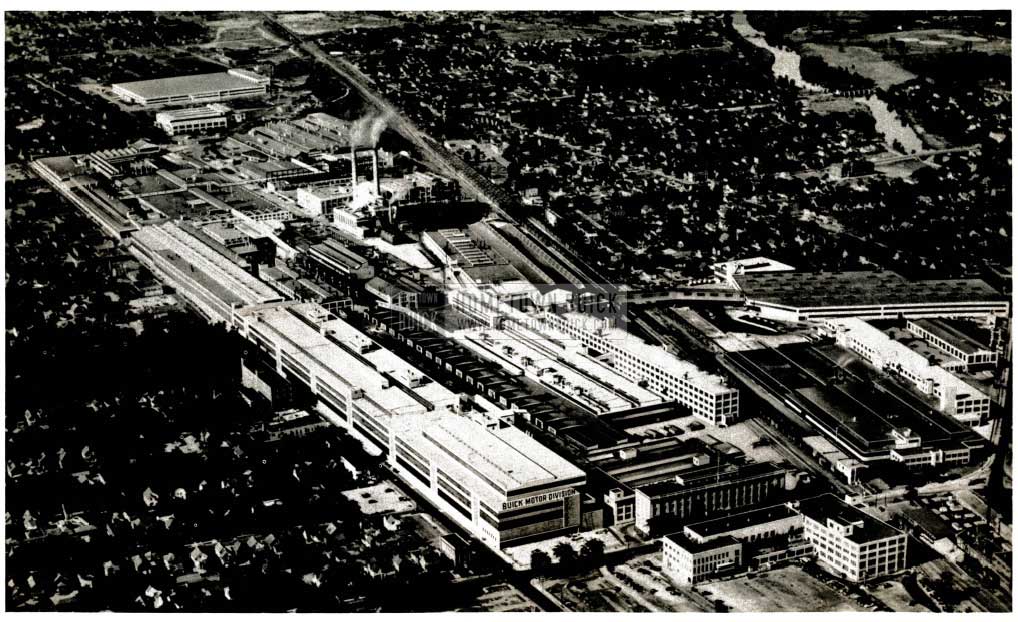