On Series 50-70, the windshield wiper motor is mounted on an auxiliary drive which is attached to the front face of the cowl panel, under the hood. The motor drives a short shaft in the auxiliary drive which extends through the cowl panel. A cross lever on rear end of the auxiliary shaft actuates the wiper transmissions through cables attached to the lever and to pulleys in the transmissions. The cables run around pulleys on cable tensioners mounted under the cowl. Each cable tensioner has a spring and ratchet which automatically take up slack and maintain proper tension on the cables.

CAUTION: 1951 Buick Windshield wiper arms must not be rotated by hand for any reason as this places an undue strain on the cable fasteners.

The tube which connects the wiper motor to engine intake manifold is attached to a valve on the motor. The motor valve is actuated by a bowden cable extending from a control mounted on left end of instrument panel. The 1951 Buick windshield wiper is operated, with engine running, by turning control knob clockwise. When car is equipped with a windshield washer the wiper control contains a button to control washer operation as described in paragraph 11-2. 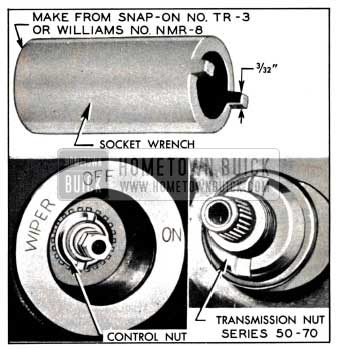 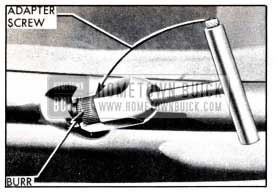 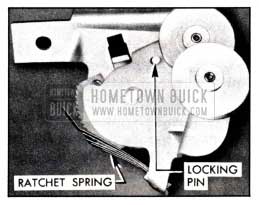 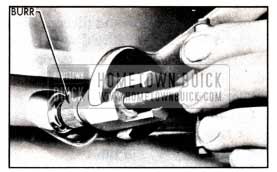 IMPORTANT: Belt, header, and reveal moldings must not be pried loose as they are retained by clips and bolt type retainers.

This paragraph contains replacement information on the various types of external moldings at 1951 Buick windshield and window openings.

The Series 40 front end belt molding consists of three sections held in place by the overlapping windshield wiper transmissions and by bolt type retainers. A rubber sealing washer and a plain washer are placed over each retainer bolt under the cowl before the nut is installed.

The Series 50-70 front end belt molding consists of two sections, with right hand section overlapping the left hand section at the center. Three bolt type retainers attach each section of molding and one retainer attaches both sections where they overlap at the center. Rubber sealing washers are placed on each retainer bolt between the molding and cowl panel. See figure 13-18. A single screw attaches outer end of each molding to the body pillar. 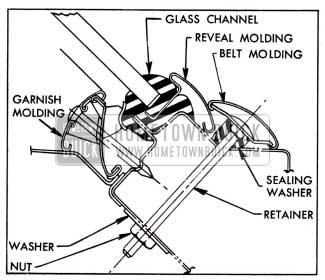 The right hand section of 1951 Buick windshield header molding overlaps the left hand section at the center. The sections are attached by six bolt type retainers having barrel nuts located in the windshield header under the headlining. Rubber sealing washers are placed on retainer bolts between the molding and roof panel. See figure 13-19. A single screw attaches outer end of each molding to the body pillar. 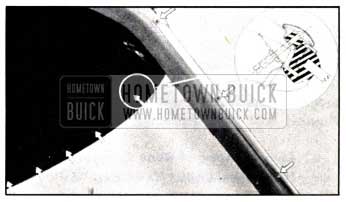 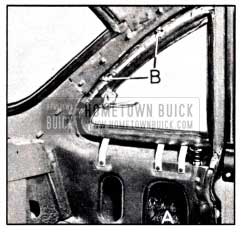 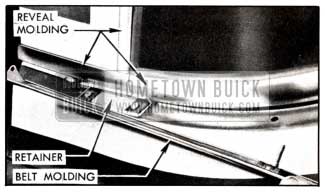 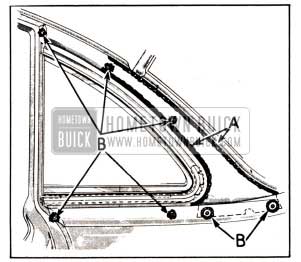 Replacement of Back Window Reveal Moldings

Lower reveal moldings on three-piece back windows are retained by clips inserted into grooves in the window glass rubber channel. Clipped molding can only be replaced after the glass and channel assembly is removed from window opening as described in paragraph 13-13.

Use new retainers when installing reveal molding, since old ones have been cut off after installation. Place retainers in molding with short side of plate toward the inner or glass side of molding. See figure 13-24. 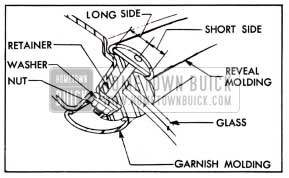 Seal retainer bolts with 3-M Weatherstrip Adhesive before installation of molding. After installation, draw nuts up firmly then cut off surplus ends of bolts to provide clearance when garnish molding is installed. 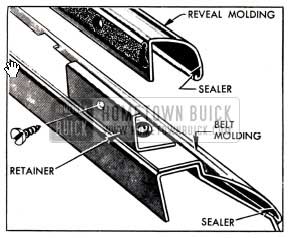 On rear door only, remove rear reveal molding if this molding is present. On door having stationary window, remove screw retaining escutcheon to header at upper forward edge of stationary glass.

The windshield glass is mounted in a molded rubber channel which fits over a pinchweld flange formed by the body panels around the windshield opening. The reveal molding which covers the rubber channel on the outside is retained by a flange which hooks into a groove in the channel.

The procedure for removal, installation and sealing of a windshield glass and channel is essentially the same on all models, with the exception of variations caused by differences in the reveal moldings, and header moldings, when used. To replace one glass of a two-piece windshield, the complete two-piece glass and channel assembly must be loosened from the body opening since the engagement of the reveal molding flange in the rubber channel prevents replacement of one glass while the other side .is anchored in place.

Replacement of 1951 Buick Windshield Glass Only

When a windshield glass is broken by accident or other condition which does not indicate a fault in windshield mounting, it is not necessary to remove the complete windshield glass, channel, and reveal molding assembly in order to replace the glass unless the channel and moldings are also damaged.

When it is only necessary to replace a windshield glass, use the following procedures far enough to effect removal, installation, and sealing of the glass as outlined above. If a faulty glass mounting is indicated, however, use the complete replacement procedures to insure correction and proper mounting of the new glass. On Series 50-70, if interference between lower reveal molding and wiper transmissions prevents removal of assembly, release the lower molding from rubber channel before attempting to remove assembly.

Tape ends of cord to inside surface of glass as illustrated. 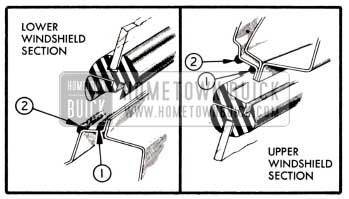 On two-piece 1951 Buick windshield also apply a bead of sealer across the top and bottom of windshield center division bar. 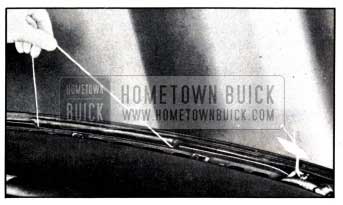 Back window glasses are mounted in a molded rubber channel which fits over a pinchweld’ flange formed by the body panels around the window opening.

The procedure for removal, installation and sealing of a back window glass is essentially the same on all models, with the exception of variations caused by differences in the reveal moldings. To replace one glass of a three-piece back window, the complete three-piece glass and channel assembly must be removed from the window opening as described in the following procedure.

Removal of Back Window Glass Assembly

If body has a center arm rest, remove arm rest extension strap retainer by removing two screws concealed under upper end of strap, then remove seat back trim valance by removing all screws attaching it to the shelf panel.

Installation of Back Window Glass Assembly

On three-piece back window, install the center section in rubber channel first, then install the side sections. 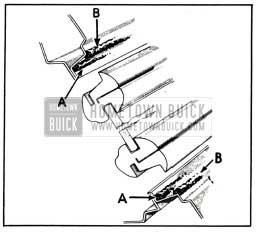 NOTE: The Riviera, Style “37”, door and rear quarter windows are similar to the windows on convertible coupes except that on Models 45 R and 56 R they are manually operated by regulators instead of the Hydro-Lectric Power System. For service procedures on Style “37” windows refer to Section 13-E.

Each door and rear quarter window has a safety plate glass which slides vertically in felt glass run channels. Fabric weatherstrips attached to the lower reveal molding and to the inside garnish or belt finishing molding seal the glass along lower side of window opening and assist in preventing vibration of the glass.

The lower edge of door and rear quarter window glass is sealed into a metal sash channel. A channel-shaped cam or track attached to the sash channel is engaged by knobs on the main and idler arms of the window regulator assembly mounted on door or rear quarter inner panel. A knob on the opposite end of regulator idler arm slides in a channel-shaped regulator cam or track mounted on inner panel. The cams cause the arms of window regulator to apply evenly distributed pressure on lower sash channel to raise or lower the glass without tilting and binding in glass run channels.

The procedures given in this paragraph are for door windows; however, the same general methods are applicable to replacement of similar parts of the rear quarter windows. The principle difference is that rear quarter windows do not have window division channels.

Replacement of Garnish and Inside Belt Finishing Moldings 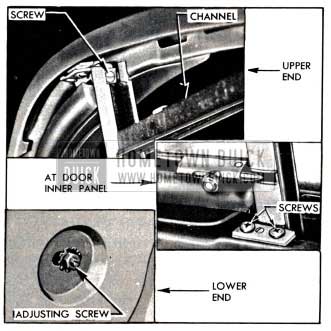 If channel is not properly positioned, adjust the lower end in or out, forward or rearward at the screw as required to obtain free movement of window glass. 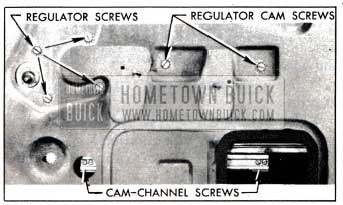 If glass binds or has excessive edgewise play it may be necessary to adjust the window division channel at lower end.

On Series 40 Style “69” bodies, the rear doors have small stationary windows in place of ventilators.

Each ventilator has a safety plate glass sealed into a metal channel which is pivoted vertically. When a ventilator is closed it is sealed against passage of wind, water and dust by contact with a molded rubber weatherstrip attached to the door and the window division channel.

Door ventilators are operated by a regulator mounted on the door inner panel. A bolt type lock riveted to the glass channel provides a lock for the ventilator. See figure 13-34. 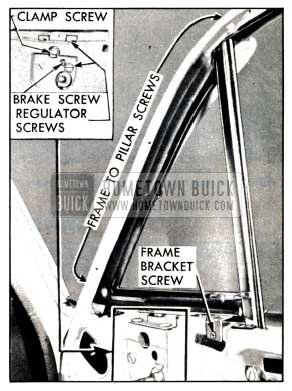 Rear quarter ventilators have a friction mechanism to hold ventilator in desired position and an inside locking handle. The friction mechanism is a part of the ventilator frame and consists of a heavy coil spring mounted on the frame spindle to exert frictional force against the mounting support. The spring pressure is set at the factory to give the best possible balance between ease of operation and resistance to closing under wind pressure, and usually will not require further adjustment. If the ventilator does not remain in set position when car is in motion, the spring pressure and friction may be increased by removing the ventilator assembly and tightening the nut at lower end of ventilator frame spindle.

Excessive play at ventilator lower pivot may be corrected by tightening the clamp screw which attaches the glass channel T-shaft to ventilator regulator. See figure 13-34.

Excessive looseness or tightness in operation of the ventilator regulator may be corrected by adjusting the screw which controls the brake or friction clamp on the regulator. See figure 13-34.

To tighten the clamp screw or adjust the brake screw it is necessary to loosen door trim pad sufficiently to provide access to these screws (par. 13-16).

If ventilator glass does not fit evenly, up and down, against molding on window division channel, or ventilator lock does not slide to locked position with moderate pressure, it is usually necessary to adjust the division channel. This adjustment, however, should be limited so as not to cause a looseness or bind in the fit of the door window. See paragraph 13-14. (d).