The AC type AJ combination fuel and vacuum pump is used on all series engines. The pump assembly for Series 70 differs from the pump for Series 40-50 only in the shape of rocker arm and in the use of an air dome on the fuel outlet of the Series 70 pump.

The pump assembly, which is mounted on right side of engine crankcase at the front, is operated by an eccentric on the engine camshaft which actuates the pump rocker arm. The single rocker arm actuates both the 1951 Buick fuel and the vacuum sections of the pump through separate links which permit each section to function independently of the other section. See figure 3-15. 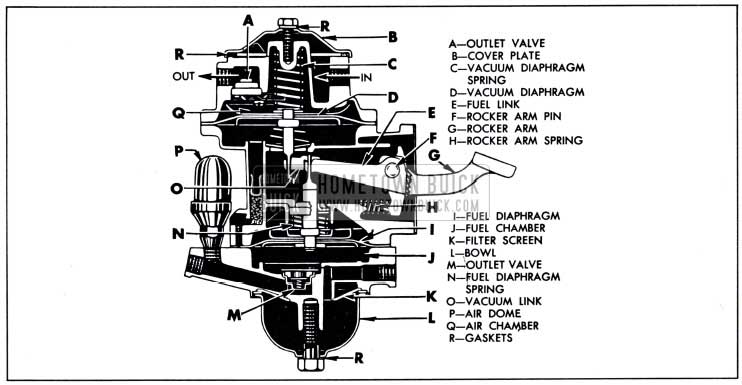 The 1951 Buick fuel and vacuum sections form two separate, independently operating diaphragm type pumps. They are combined in one assembly for compactness and to permit operation from one eccentric on the engine camshaft.

A 1951 Buick fuel filter, consisting of a metal bowl and a fine mesh screen, is incorporated in the 1951 Buick fuel section of the pump. See figure 3-15. Fuel from the gasoline tank first enters the bowl then flows upward through the screen into the fuel pump. The bowl provides a settling chamber for water and the dirt which cannot pass the screen. The bowl and screen should be cleaned periodically (par. 3-7).

The function of the 1951 Buick fuel section of the pump is to draw gasoline from the tank and supply it to the carburetor in sufficient quantity to meet engine requirements at all speeds and loads.

The pump rocker arm (G) is actuated by an eccentric on engine camshaft. The arm is held in contact with the eccentric by the rocker arm spring (H). Movement of rocker arm is transmitted to the fuel link (E) which pulls the fuel diaphragm (I) upward from the fuel chamber (J) against pressure of the diaphragm spring (N). See figure 3-15.

The return stroke (low point of cam) releases the compressed diaphragm spring which then exerts pressure on the diaphragm and the fuel in the chamber. This pressure closes the inlet valve and forces fuel out through the outlet valve to the carburetor in an amount governed by the pressure in the pump-to-carburetor line.

The air dome used on Series 70 pumps provides a pocket in which fuel under pressure can compress a certain volume of air. When the pressure is relieved (pump on suction stroke) the pocket of compressed air pushes the fuel on to its destination. The air dome minimizes flow variations experienced with a two-cycle pump stroke and increases the pump output.

The function of the vacuum section of the pump is to act as a booster to the intake manifold vacuum, thereby providing uniform operation of the windshield wiper at all engine speeds and loads.

The pump rocker arm (G) is actuated by an eccentric on engine camshaft. The arm is held in contact with the eccentric by the rocker arm spring (H). Movement of rocker arm is transmitted to the vacuum link (0) which pushes vacuum diaphragm (D) upward into air chamber (Q) against pressure of the diaphragm spring (C). See figure 3-15.

Pressure created in the air chamber by upward movement of diaphragm holds the inlet valve (not shown) closed and expels air through the outlet valve (A) into the engine manifold.

The return stroke (low point of cam) releases the compressed diaphragm spring which then pushes the diaphragm down, creating a vacuum in air chamber. This vacuum closes the outlet valve and draws air through the inlet valve from the windshield wiper.

If the 1951 Buick fuel pump is suspected of delivering an improper amount of fuel to the carburetor, it should be inspected and tested on the engine, as follows:

If only the vacuum section of the pump requires replacement of the diaphragm or valves, the procedures given in subparagraphs a, c, and e, should be followed. If the fuel section of pump requires replacement of the diaphragm, however, the complete procedure given in subparagraphs a through e must be followed.

The 1951 Buick fuel diaphragm is sealed around the pull rod with a tight fitting oil seal which is staked into the pump body. Tilting of the diaphragm to unhook pull rod from the fuel link will damage this oil seal. The safest method to follow is to first remove the rocker arm and link so that diaphragm pull rod can be pulled straight out without damage to the seal.

Removal of Vacuum Diaphragm and Valves

If cover and body stick together, rap cover with screwdriver handle after backing off long screws a few turns; do not pry between the flanges. Remove long screws, vacuum cover assembly, diaphragm spring and spring retainer. See figure 3-15. 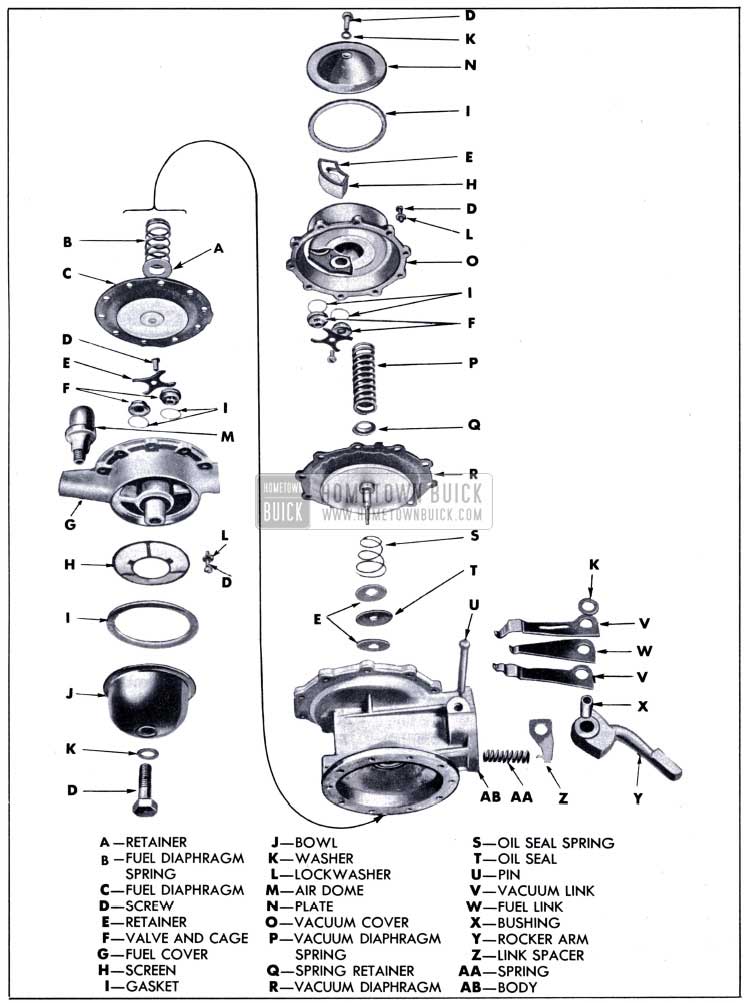 Cleaning and Inspection of Pump Parts

Replacement parts are available in three different kits, as follows:

Each diaphragm kit contains the proper diaphragm, valves, springs, and gaskets to service the indicated section of the pump. A separate rocker arm pin is required with the fuel pump diaphragm kit. The overhaul kit contains all parts in both diaphragm kits plus links and other parts subject to wear or deterioration.

The kit to use will be determined by the corrections required, or by inspection of disassembled parts as follows:

Blow out all passages with air hose.

Always install the 1951 Buick fuel diaphragm before the vacuum diaphragm. 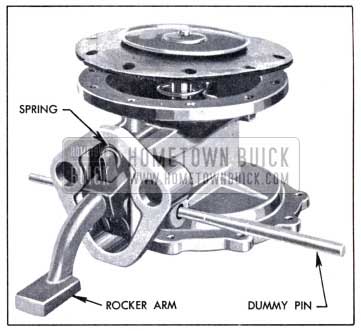 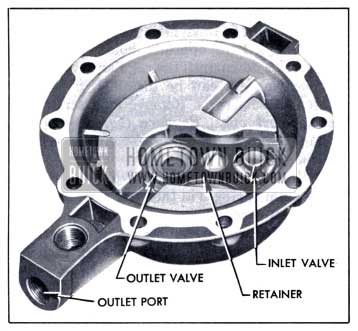 CAUTION: Diaphragm must be held in flexed position until all Screws are tightened, otherwise diaphragm may be stretched too tight and cause pump to deliver excessive pressure. 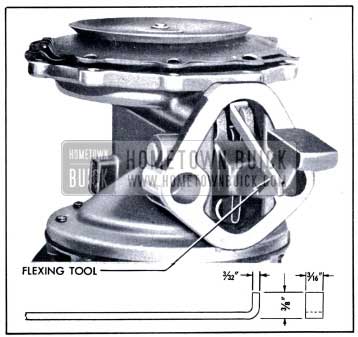