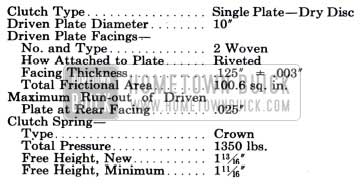 The single plate, dry disc clutch used in Series 40-50 when equipped with a synchromesh transmission is distinguished by a “crown” type clutch spring. The “crown” type spring serves the same purpose as conventional clutch release levers and drive lugs, in addition to providing pressure for clutch engagement. 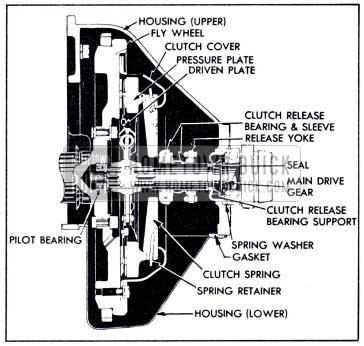 The 1951 Buick clutch driven plate assembly is mounted with a free sliding fit on the transmission main drive gear and is keyed to the gear by ten splines. The front end of the main drive gear is piloted by a ball bearing pressed into a recess in rear end of engine crankshaft. See figure 4-1.

The outer area of the driven plate is divided into segments which are formed in low waves to provide springs between the plate facings and thereby cushion engagement of the clutch. A woven facing, grooved to give quick release, is riveted to each side of every segment of plate. When the 1951 Buick clutch is fully released, the waved segments cause the facings to spread approximately .050″ and the movement of pressure plate provides approximately .030″ clearance to assure full release of driven plate. See figure 4-2. 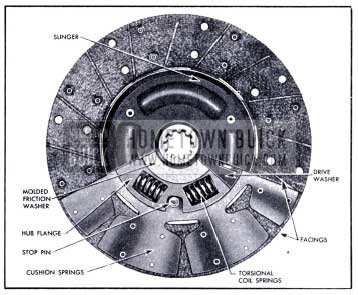 The driven plate assembly is designed to prevent torsional periods of the engine from being transmitted to the transmission gears and causing rattle. This is accomplished by driving the plate hub through torsional coil springs and providing frictional dampening by means of molded friction washers.

The flange of driven plate hub and two molded friction washers are located between the drive washer and the plate which bears the facings. The plate and driven washer are solidly joined together by three rivets which are shouldered so that the hub may move independently of the plate and washer. When the parts are riveted together the molded friction washers are compressed between the hub flange and drive washer just enough to provide proper braking friction between these parts. Six coil springs are located in notches or recesses- in the plate, hub flange, and drive washer so that the plate and washer drive the hub through these springs. The three shouldered rivets pass through notches in the edge of hub flange and serve as stop pins for limiting compression of the coil springs whenever shock loads are transmitted through the clutch assembly. The coil springs are covered on transmission side of plate by a slinger which keeps oil or oil vapor from the driven plate facings. See figure 4-2.

The 1951 Buick clutch pedal is supported on the car frame upon the same shaft and bracket which supports the brake pedal. The pedal is bushed and is lubricated through a passage in the shaft which has a lubrication fitting.

The clutch pedal is connected by a nonadjustable link to the outer arm of a release equalizer which provides a universal action in the release linkage. The equalizer permits smooth engagement of clutch withing being affected by movement of the engine on its mountings. The inner end of equalizer is fitted with a rubber bushing which rotates on the pin of a bracket attached to engine. The outer end of equalizer rotates on a ball stud attached to car frame. A spring and two spring seats inside equalizer maintain pressure on the split bearings which support equalizer on stud ball. A lubrication fitting is installed on equalizer and seals inclose both ends to exclude dirt and water. See figure 4-3. 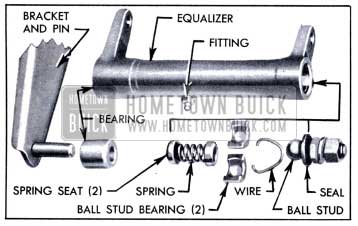 The inner arm of 1951 Buick clutch release equalizer is connected by an adjustable rod to the outer end of the release yoke which is pivoted on a ball stud located in the flywheel housing. The yoke is held on the ball stud by a U-shaped spring riveted to yoke. A boot around the yoke provides a flexible closure for the yoke opening in flywheel housing. The inner end of release yoke is in position to push forward on the clutch release bearing sleeve when clutch pedal is depressed. A U-shaped spring riveted to release bearing sleeve holds bearing sleeve in contact with yoke.

A coiled return spring is connected between the 1951 Buick clutch release rod clevis pin and the transmission shift idler lever bracket to keep the clutch release bearing out of contact with the clutch spring when clutch is engaged.

The pressure required to depress 1951 Buick clutch pedal to toe board should not exceed 35 pounds. If pedal pressure is excessive, make certain that pedal is not binding in floor mat or the seal on underside of toeboard. Thoroughly lubricate clutch pedal and release equalizer with chassis lubricant. NOTE: Excessive pedal pressure may be caused by using excessive grease gun pressure on equalizer, which may force the rubber inner bearing out into contact with equalizer bracket on engine.

When oil is found on facings, examine pilot bearing, transmission drainback, rear engine bearing and engine oil leaks which might drain into clutch housing past gasket between upper and lower flywheel housings. It is important that this gasket provides a good seal.

If test shows that 1951 Buick clutch is releasing properly and complaint is of gear clash going into low and reverse gears, refer to paragraph 4-10.

If test shows that clutch is not releasing properly, check clutch pedal lash (par. 4-4) and check release linkage for lost motion. Correct as necessary and again test for clutch drag.

If clutch drag cannot be corrected in release linkage, remove flywheel lower housing and check for proper contact between clutch spring and cover as described in paragraph 4-5 (b, step 9). If removal of clutch is found necessary, check driven plate for oil soaked or cracked facings, also for run-out and for free movement on main drive gear (par. 4-13, b).

First make certain that 1951 Buick clutch pedal is adjusted for specified lash (fig. 4-4) and that pedal is not binding. 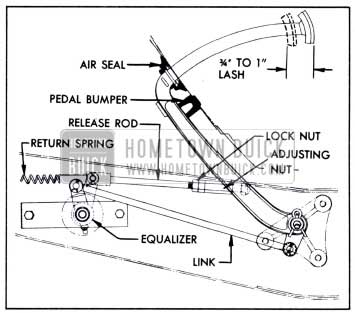 One type of clutch slippage is sometimes wrongly diagnosed as due to a weak clutch spring. This slippage occurs during gear shifting and full engagement of the 1951 Buick clutch is not obtainable until the engine speed is reduced. After full engagement is obtained no further slippage occurs during acceleration or under full load. This condition is usually due to the clutch driven plate hub sticking on the splines of the transmission main drive gear. Correction can be made by removing the clutch and thoroughly cleaning splines of driven plate and main drive gear then applying a light coating of Lubriplate.

If 1951 Buick clutch spring is suspected of being weak, inspect it as described in paragraph 4-6, b.

It is very important to maintain proper clutch pedal lash at all times. Insufficient pedal lash will cause pressure of release bearing against the clutch spring, resulting in abnormal wear of these parts; it may also cause clutch slippage and abnormal wear of driven plate if pressure is great enough to prevent positive engagement of 1951 Buick clutch.

If release rod is disconnected from equalizer for any reason, be sure that clevis pin is reinstalled with head toward equalizer bracket and attach pedal return spring to opposite end of clevis pin. Interference with bracket may result if clevis pin is installed in reverse position.

4-5 REMOVAL AND INSTALLATION OF 1951 BUICK CLUTCH 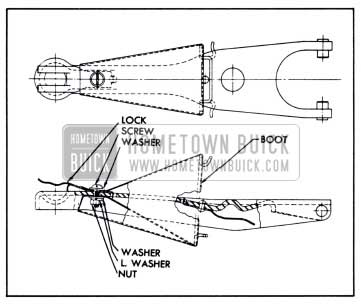 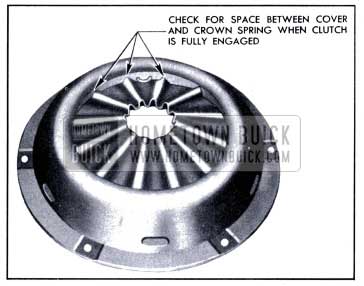 1951 Buick Points to Check Contact of Clutch Spring with Cover

The 1951 Buick clutch will not fully disengage if any one of the clutch spring contact points fails to solidly contact the cover. This condition must be corrected by removing clutch and properly setting the spring retainer ears on cover. See figure 4-7. 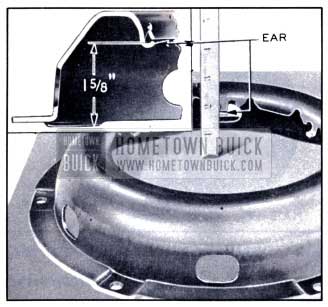 If dimension is not 1 5/8 inch, and cover is otherwise serviceable, the ears should be bent as required, using care to avoid cracking the metal.

It is a normal condition to have some wear at the inner edge of spring, resulting from release bearing sliding radially on clutch spring. Due to variation in diameters of holes, the contact of bearing race may be at varying distances from edge of hole in different springs. If hole is of small diameter, release bearing forms depression having centers approximately 3/16″ from edge of hole. This type of wear does not affect the operation or efficiency of the clutch spring; the spring should not be discarded unless the depression is worn deep enough to cut through the metal. If hole is of large diameter, bearing will be at edge of hole resulting in thin metal. Unless the metal is worn to a sharp knife edge, the spring will operate satisfactorily and should not be discarded.

The 1951 Buick clutch spring will flatten slightly due to the metal taking a permanent set, which is characteristic of any type of spring after continued flexing. The normal height of a new spring is 1 13/16″. See figure 4-8. 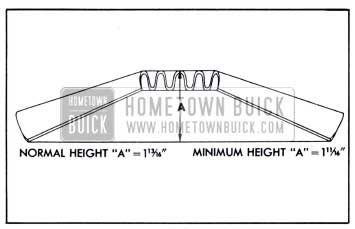 After only a short period of usage this height will be reduced somewhat; however, if height is not less than 1 11/16″ the spring will retain sufficient pressure to prevent clutch slippage and will operate satisfactorily providing, of course, that spring is not cracked. NOTE: Testing a clutch spring by standing on it and jumping up and down, forcing spring through does not necessarily indicate spring should be replaced.

If facings are worn down to rivets or are oily, two plate assembly should be replaced. A very slight amount of oil on clutch facings will cause clutch grab and chatter. A large amount of oil on facings will cause slippage or drag. Removal of oil by solvents or by buffing is not practical since oil will continue to bleed from facing material when hot.

When oil is found on driven plate facings, examine transmission drainback hole, pilot bearing, engine rear bearing and other points of oil leakage, and the flywheel lower housing gasket. It is very important that this gasket provides a good seal.

Test the fit of driven plate hub on transmission main drive gear; an easy sliding fit should exist. Regardless of whether the old plate or a new one is to be installed, the plate should be checked for run-out. This check can be made by sliding the driven plate, front side first, over the transmission main drive gear until it is tight on the spline, then setting up a dial indicator to bear against the plate facing as shown in figure 4-9. 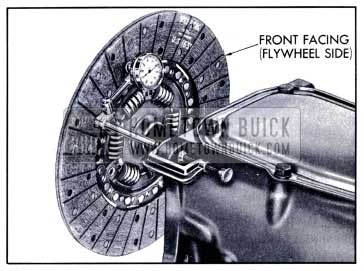 While holding firmly against front end of main drive gear to take up play in main drive gear bearing, slowly rotate driven plate and observe the amount of run-out shown by indicator. If run-out of front facing exceeds .025″ the plate should not be used since it is not practical to correct excessive run-out by bending. 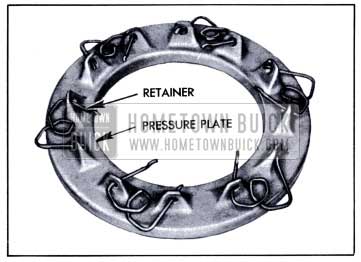 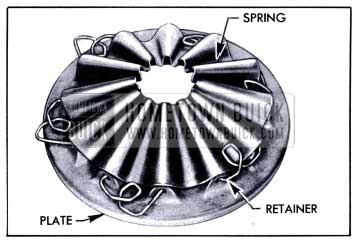 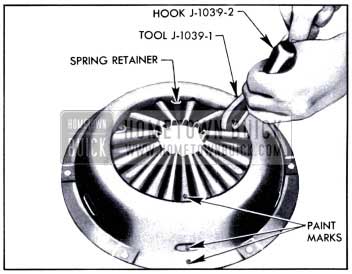 Do not hammer on tools to get them into place because this will distort clutch cover. Do not stretch retainers any further than is necessary to hook loop over ear on cover. If retainers appear weak or distorted they should be replaced in complete sets to insure even tension.