SECTION 11-A 1951 BUICK ACCESSORIES OTHER THAN RADIO

Description of 1951 Buick Heater and Defroster

Both units contain water cores which are connected by hoses to the 1951 Buick engine cooling system. The hot water supply is taken from the radiator thermostat housing on the outlet side of engine water pump and is returned to engine cooling system on the inlet side of pump. The volume of hot water flowing through the heater and defroster cores is regulated by a thermostatically actuated temperature control valve mounted on the dash and connected into the water supply line. See figure 11-2. 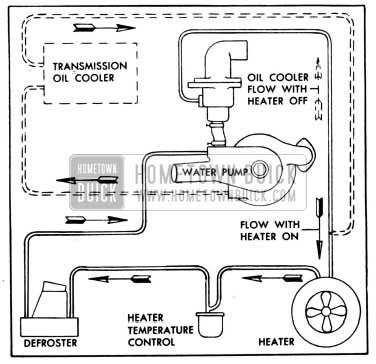 The 1951 Buick heater is mounted in the floor of body under the right side of front seat. It contains an electric blower which draws air from the body through the hot water core and recirculates the heated air at floor level.

The defroster is mounted on the right side of cowl under the hood. Outside air is supplied to the defroster by the right hand ventilator duct, which contains an electric blower to provide forced circulation when required. The volume of air passing through the defroster core is controlled by a fly valve inside the defroster housing which is connected by a wire to the control knob on instrument panel. The heated outside air then flows through ducts to openings along the base of windshield where it moves upward against the windshield, which deflects the flow rearward into the body at shoulder level.

Hot water flow through the heater and defroster cores is completely shut off when the temperature control lever is in the “OFF” position. This shuts off all heat when not desired, such as for summer driving. This feature eliminates the need for a shut-off valve in water line at engine.

NOTE: To keep out offensive traffic odors and exhaust gases when traveling in congested traffic or when parked behind a car having its engine running, all ventilator and defroster control knobs must be pushed forward to close the valves, and the defroster blower must be turned off.

Avoid inhaling exhaust gases when any concentration of these is present in the air, i.e., in a garage, in congested traffic, or when stopped closely behind a vehicle with its motor running. Exhaust gases may have strong odors which normally should give warning of their presence. However, the exhaust gases from some vehicles may not be noticeable under certain conditions and the senses of people react differently. Exhaust gases contain a percentage of carbon monoxide which is a poisonous gas that, by itself, is tasteless, colorless, and odorless. 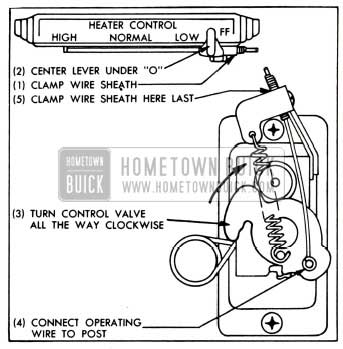 The heater and defroster blower motors are supplied with current from the “Accessories” terminal of the ignition switch. The supply wire extends from the ignition switch to the fuse block under the cowl where a fuse is located to protect the circuit. Wires from the fuse block connect to the heater and defroster switches and from the switches to the motors. See chassis wiring circuit diagrams in Section 10-J.

The 1951 Buick windshield washer assembly consists of a vacuum operated water pump and a glass water jar. The assembly is mounted in a bracket attached to the left front fender skirt where it is accessible with hood raised. The inlet at top of pump is connected by a rubber hose to the control mounted on left side of instrument panel, and the control is connected by hoses to the intake manifold. The outlet at side of pump is connected by hoses to the two spray jets located at lower edge of windshield glass. See figure 11-3. 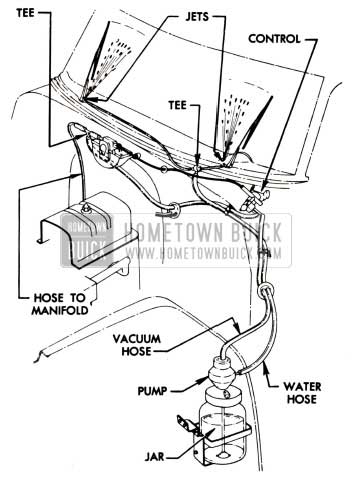 Figure 11-2 shows the heater and defroster hose connections, also the connections to the transmission oil cooler which is used only on Dynaflow cars. When hoses are disconnected for any reason they must be reconnected as shown to obtain proper circulation of water through the various units.

When the 1951 Buick windshield washer is filled for use during seasons when freezing of water may occur, Windshield Washer Anti-Freeze Solvent No. 980740 should be used. Do not use water containing alcohol or other anti-freeze materials as damage to car finish may result.

If the 1951 Buick windshield washer does not operate when control valve is used as instructed, check to make sure that water is in the jar. Examine all hoses for leaks or sharp bends, and check hoses for correct connections as shown in figure 11-3.

The 1951 Buick windshield washer jets on Series 50-70 have a swivel base and are locked by a jam nut.

If the water stream is not properly directed upon the windshield glass its direction may be readily changed. Loosen jam nut slightly, turn jet with a screwdriver as required and tighten jam nut.

1951 Buick back-up lamps are a factory installed 1951 Buick accessory. The installation consists of a lamp mounted in each rear corner of body and a switch mounted on the lower end of steering column. The lamp and switch circuit is protected by a fuse on the fuse block under cowl.

The 1951 Buick lamps will not light when control lever is in any other position, provided the switch is properly adjusted. This is a legal requirement in many states.

The 1951 Buick back-up lamp switch on cars equipped with syncro-mesh transmission is located at the lower end of steering column jacket and is operated by the transmission control shaft lever when placed in reverse position. 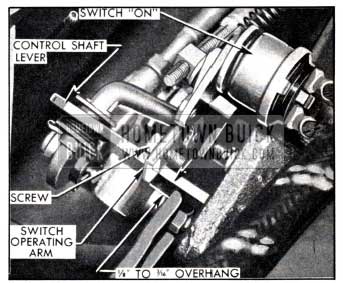 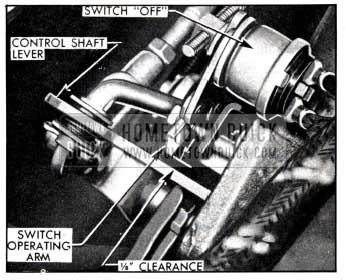 The back-up lamp switch on cars equipped with Dynaflow Drive is mounted on the flange at lower end of the steering column jacket so that the switch operating arm is operated by the transmission control shaft lower lever. 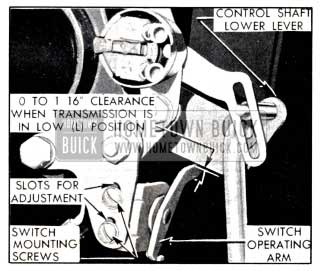 When the lighting switch is in parking position, either the parking lamps or the auxiliary lamps will burn, depending on the position of the auxiliary light switch.

The auxiliary lamps must be properly aimed, and should always be checked after any work on the front end sheet metal assembly. The following procedure covers proper aiming of each lamp individually.