The stop lights are incorporated in the combination tail, stop, and direction signal lamps. These lamps and the replacement of bulbs are covered in paragraph 10-56.

The stop lights are controlled by a hydraulic switch mounted on the brake pipe distributor fitting near the master cylinder. The switch is closed by hydraulic pressure when the brakes are applied. It requires no adjustment or attention except to make sure that the wire connections are tight and that the switch is tightly screwed into the distributor fitting to avoid fluid leaks that would affect operation of the brakes.

The stop lights are independent of the lighting switch. The stop light circuit is protected by the 14 ampere “Direction Signal” fuse mounted on the fuse block under the cowl.

When replacing stop light switch have new switch ready to install as soon as old switch is removed from distributor fitting. Before installing new switch make sure that port in distributor fitting is filled with brake fluid. Have a helper gently depress brake pedal to fill the fitting from master cylinder, if necessary, then immediately install new switch.

If brake pedal has springy, spongy action after installation of stop light switch, air has entered brake pipes and it will be necessary to bleed the hydraulic system (par. 8-9).

The left hand horn is high pitched (380-400 cycles) and the right hand horn is low pitched (302-323 cycles), so that together they produce a pleasing blended tone. The horns have been made exceptionally compact by a spiral air column cast into the base and collar. See figure 10-95. 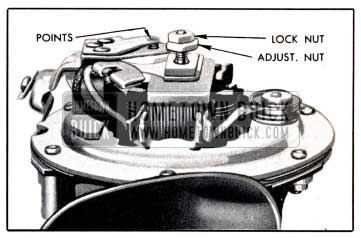 When the 1951 Buick horn button contacts are closed, a small amount of current flows through the relay winding to ground at the horn button. This magnetizes the relay core, which attracts the flat steel relay armature. The armature has a contact point which makes contact with a stationary point to close the horn circuit. When horn button is released, current stops flowing through relay winding so that the core loses its magnetism; the armature spring then causes contact points to be separated.

The monogram and bezel assembly is held in the steering w h eel cap base by three springs. The assembly may be removed by inserting a small screw driver in a notch provided in the cap base and prying against the bezel. When the monogram and bezel assembly are removed, the operating ring and wheel base assembly may be removed by removing the three screws which attach the wheel base to the steering wheel hub. See figure 10-93.

The 1951 Buick horn button cap has a rubber retainer which snaps over the rim of the contact cup and the contact strap bridges between the horn wire connector in steering shaft and the rim of contact cup. The contact cup is attached to steering wheel hub by three screws and insulating fibre spacer bushings which permit movement of the cup when button cap is pressed. The screws and bushings hold the flat steel contact plate tight against the wheel hub. The dished steel horn blowing spring is placed between the cup and contact plate, with outer rim of spring resting on a shoulder of the plastic material of wheel, which provides insulation. See figure 10-94. 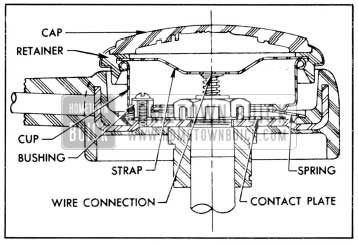 Normally, the dished spring holds the contact cup outward so that no contact is made, but when the cap is pressed the cup pushes the raised inner edge of the spring down into contact with the plate, thereby completing a grounding connection between the horn wire connector and the steering shaft.

Whenever 1951 Buick horn button parts are assembled into the steering wheel the dished horn blowing spring must be installed so that clearance exists between inner edge of spring and the contact plate. See figure 10-94. The contact cup must be installed with the locating notch in rim in line with lower spoke of steering wheel so that the horn button cap emblem will be properly located when cap is installed.

When 1951 Buick horns fail to blow first check wiring circuit (par. 10-12, c) before attempting to adjust horns. If horns are at fault, or tone is poor, adjust each horn for specified current draw as follows:

Three checks and adjustments are required on the horn relay: air gap, point opening, and closing voltage. These should be made in the following order: 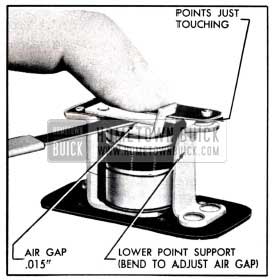 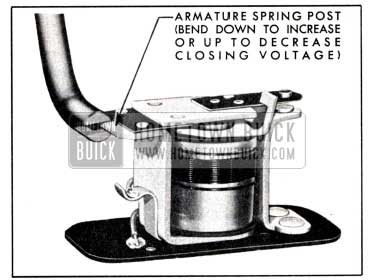 The direction signal switch and its operating mechanism is enclosed in a housing on steering column just below steering wheel.

The switch must be manually set by moving switch control lever down to indicate a right turn or moving lever up to indicate a left turn.

When the lever plate is manually rotated for a right (or left) turn by the control lever, the corresponding end of a trigger on lever plate is pressed against a cam on the steering wheel hub by the action of a spring loaded post lever. When the steering wheel is turned approximately one third revolution for a right (or left) turn, the end of the trigger drops into a notch in the cam so that the trigger, lever plate, and switch handle are pushed back to the “off” position as the wheel is turned in the opposite direction after the turn is completed. As the switch reaches the “off” position, the trigger is withdrawn from engagement with the cam by the action of another spring loaded post lever. See figure 10-103. The switch remains in the “off” position until it is again set for a turn.

The cam is a hardened steel ring with two diametrically opposite elongated notches. It is installed on the shouldered hub of steering wheel with three brass washers and a spring washer, all being retained by a snap ring. The brass washers and spring washer from a friction clutch which facilitates shifting of the cam to adjust switch for proper timing, and coincidentally prevents accidental locking or jamming of the steering wheel by the 1951 Buick signal switch mechanism.

Since the direction signal lights are independent of the headlamp lighting switch and thermo circuit breaker, the wiring circuits are protected by a “Direction Signal” fuse on the fuse block under the cowl. The Tungsol flasher is also mounted on the fuse block, which serves as a terminal block between the 1951 Buick signal switch and the chassis wiring.

The 1951 Buick direction signal lights are independent of the parking and stop light circuits, and the indicator lamp bulb sockets are grounded to the instrument panel. 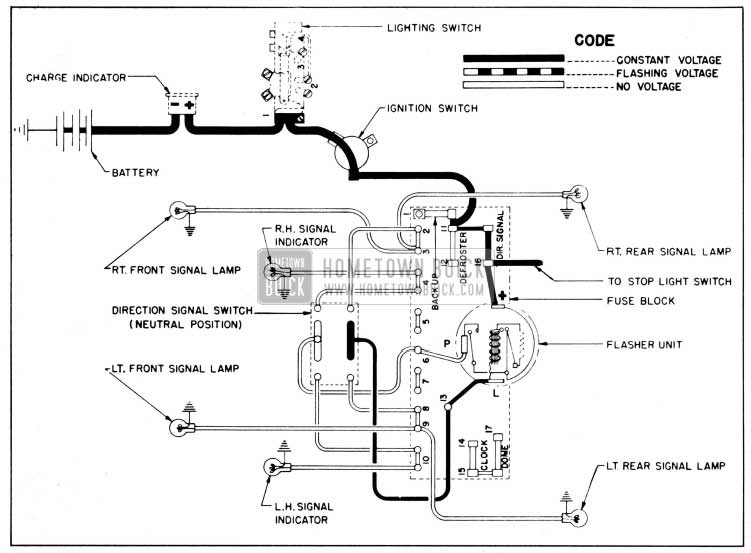 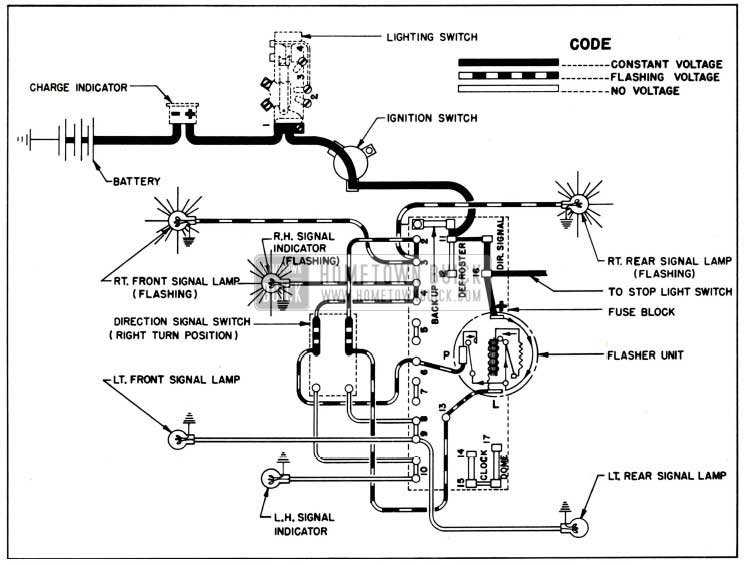 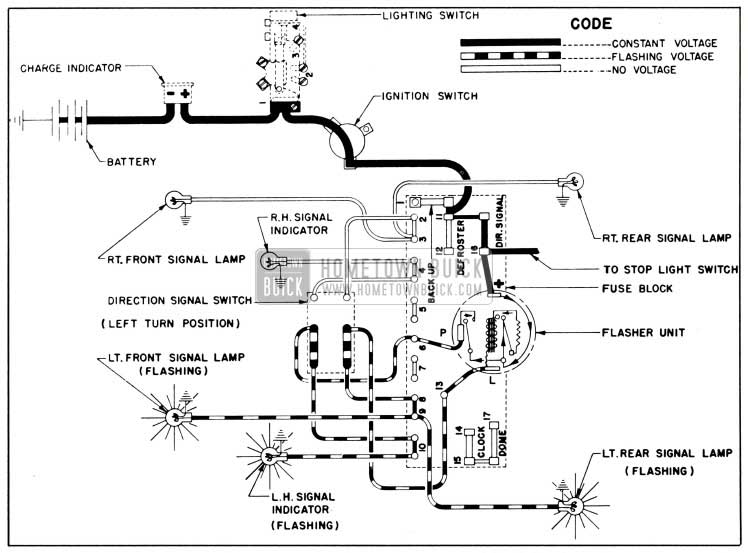 If the 1951 Buick direction signal switch cam is correctly located on the hub of steering wheel, the switch will automatically return to the “off” position following a turn, provided that the steering wheel has been turned at least one-third revolution. If the wheel has been turned less than one third revolution, the switch must be manually returned to the “off” position.

The actual returning of switch to the “off” position takes place as the steering wheel returns to the straight-ahead position. If the switch does not operate as described, the switch cam is not in proper relation to the trigger. See figure 10-102, view A. The switch cam may be adjusted for correct timing as follows: 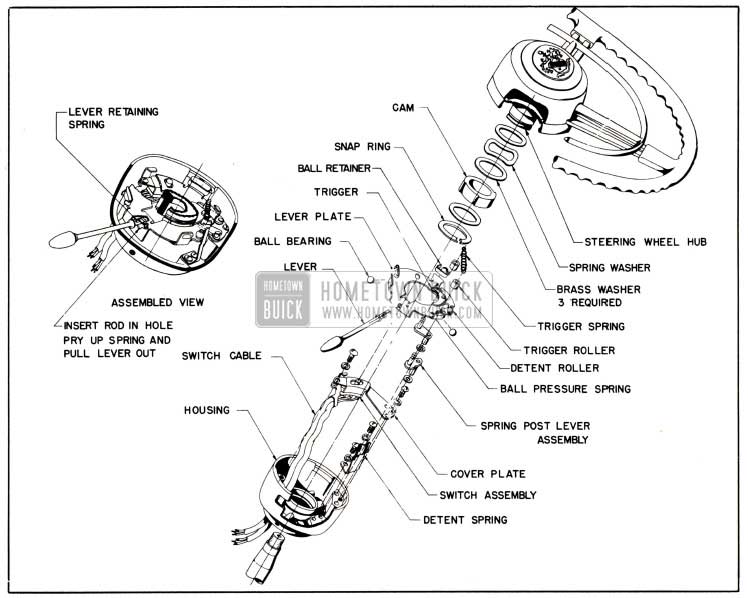 If trouble is experienced in maintaining proper timing and adjustment of the cam, the spring washer is probably flattened and too weak, permitting the cam to turn on hub. To check the clutch friction, note the pressure required to hold the control lever while slipping the cam in step 3 above.
Compare with another car on which no trouble is experienced. See paragraph 10-64 for replacement of cam or clutch friction parts.