Wheel brake assemblies used with 1955 Buick power brake mechanism are identical with the regular (foot powered) brake equipment, except that a high pressure type of brake shoe lining is used on the front secondary shoes. This lining is identified by its black colored edge.

The 1955 Buick power brake cylinder utilizes engine manifold vacuum in its operation, as described later, therefore it is connected to the intake manifold through pipes and flexible connections. A vacuum reserve tank of approximately 180 cubic inches capacity is connected into the vacuum line near the power brake cylinder to insure quick and smooth response of the brake cylinder on all power brake applications. A check valve installed in the vacuum line closes to maintain existing vacuum at the 1955 Buick power cylinder and in the reserve tank whenever manifold vacuum falls below that in the brake system.

When the engine is stopped and check valve is closed, the tank provides sufficient reserve vacuum for two or three normal power brake applications. When reserve vacuum does not exist, the brakes cable applied manually in the same manner as the regular (foot powered) brakes, except that somewhat more effort is required because of the reduced leverage of the 1955 Buick power brake pedal. Since brake application is normally assisted by vacuum, low pedal leverage is used to reduce the total pedal travel.

The 1955 Buick power brake cylinder is the “air suspended” type, meaning that atmospheric pressure is present on both sides of the power piston in the unapplied stage. In the “vacuum suspended” type used in 1953-54 models, vacuum exists on both sides of power piston in the unapplied stage, when engine or vacuum pump is running. 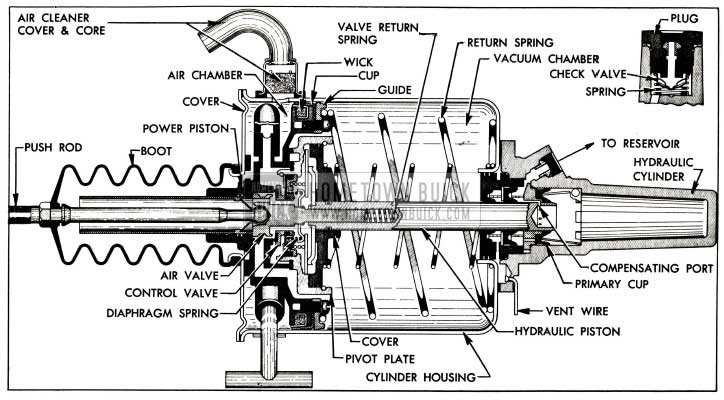 As shown in figure 9-13, a cover closes the forward end of the cylinder housing to form a large chamber in which the power piston and related parts operate. The section on the cover side of the piston will be called the air chamber since it is open to atmospheric pressure at all times. The section on the opposite side of the piston will be called the vacuum chamber since it is subjected to manifold vacuum during power application of brakes. All air entering the cylinder housing passes through an air cleaner core.

The rim of power piston carries a spring expanded leather cup and a felt lubricating wick to seal against passage of air, and an attached guide provides a bearing in the cylinder housing. A flexible rubber hose connecting the piston with a vacuum tee on the side of cylinder housing permits the piston to move back and forth while connected to manifold vacuum. Air is exhausted out of the vacuum chamber through passages in the piston and the vacuum hose when the control valve is set for power application.

Movement of the piston into the fluid filled cylinder displaces a corresponding volume of the fluid, which is forced out into the brake pipes and wheel cylinders. Compensating ports in the counterbored end of the piston permit return of surplus fluid to reservoir when brakes are released. The check valve and spring in the hydraulic cylinder maintains static pressure in brake pipes and wheel cylinders.

(1) Unapplied Stage. See figure 9-13. The pedal return spring holds the push rod and attached air valve forward so that the air valve is held clear of the floating control valve. At the same time, the valve diaphragm spring holds the floating control valve against its seat on the power piston, thereby closing the passage connected to manifold vacuum.

Atmospheric pressure enters through the air cleaner into the air chamber, flows through the boot and air valve into the space between the air valve and the floating control valve, then flows through passages in power piston and out between piston and pivot plate into the vacuum chamber. With the vacuum passage closed and the vacuum chamber open to outside air, the power piston is balanced by atmospheric pressure on both sides and is held against the housing cover by the return springs.

The compensating ports in counterbored end of hydraulic piston are forward of the primary cup, permitting flow of brake fluid between the reservoir and hydraulic cylinder as required. The check valve is seated to maintain static pressure in the brake pipes and wheel cylinders. 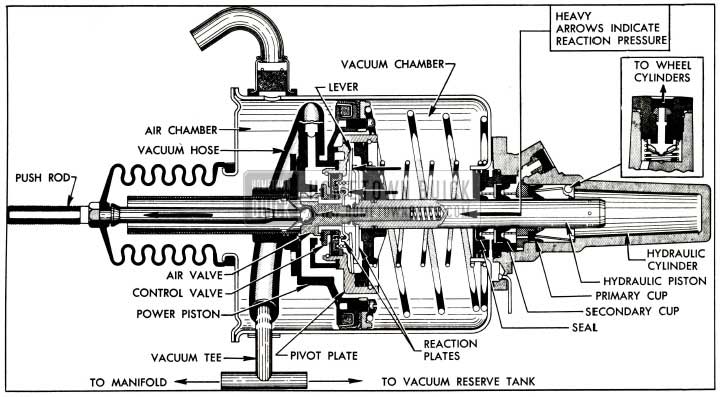 (3) Reaction Pressure. As pressure is built up in the brake pipes and wheel cylinders during brake application, the hydraulic piston is subjected to the same pressure. Since the piston is free to move forward in the pivot plate cover, the pressure on the piston is transmitted through the attached reaction plate to the six reaction levers. The outer ends of the levers press against pivot points in the pivot plate and the inner ends press against the valve reaction plate which now bears against a shoulder of the air valve. See figure 9-14.

In this manner approximately 40% of the load on the hydraulic piston is transferred through the air valve and push rod to the brake pedal to oppose the foot pressure applied by the driver. This reaction pressure gives the driver a definite indication or “feel” of the pressure being applied to the brake shoes so that he has positive control over the braking operation at all stages. 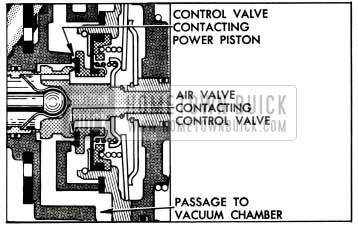 At this point, the air valve is also in contact with the control valve so that the passages to the vacuum chamber are sealed off from atmospheric pressure as well as vacuum; therefore the power piston remains stationary or poised, ready to move in either direction as dictated by brake pedal movement.

(6) Manual Application. When the engine is not running and reserve vacuum is exhausted, the brakes are applied entirely by foot pressure on the brake pedal. As the pedal is depressed, a shoulder on the air valve pushes against the end of the hydraulic piston so that pedal pressure is applied directly to the piston to force it into the hydraulic cylinder. As the valve and hydraulic piston assembly moves rearward, the power piston remains in the unapplied position, where it is held against its stop by its return spring. See figure 9-16. 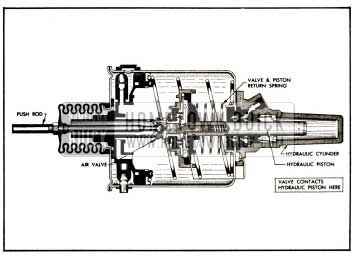 This separation of the power piston from its related parts eliminates compression of the heavy return spring, friction of the leather piston cup against the cylinder housing, and movement of air out of the vacuum chamber; consequently the pedal pressure required for manual application is much lighter than if the power piston had to be moved. The only resistance offered in the cylinder housing is the relatively light spring used to return the valve and hydraulic piston assembly to the unapplied position on release of brake pedal.

If the engine should start running while brakes are being manually applied, manifold vacuum would exhaust air from the vacuum chamber through the wide open passages in the power piston, and the power piston would move rearward and seal to the pivot plate as shown in figure 9-14.

NOTE: Refer to figures 9-13 and 9-11, for identification of parts not otherwise illustrated. 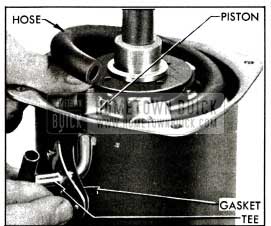 Slowly release power piston to control the pressure of piston return springs as piston and attached parts emerge from housing. Make sure that lip of leather piston cup does not catch in holes in housing. 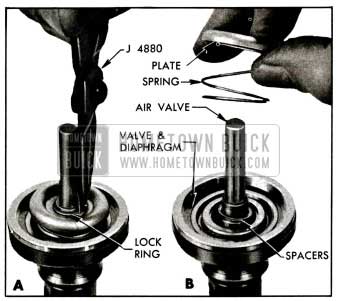 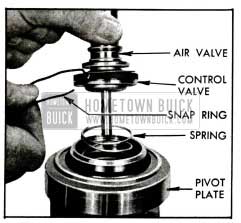 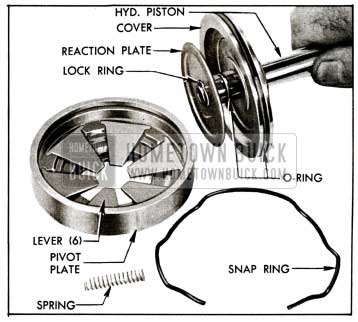 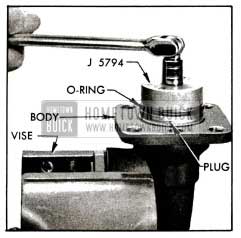 As an aid in determining the cause of improper 1955 Buick power brake operation, wipe fluid from all rubber parts, then carefully examine these parts for nicks, cuts or other damage. After examination discard all these parts.

CAUTION: Do not use anti-freeze alcohol, gasoline, kerosene, or any other cleaning fluid that might contain even a trace of mineral oil, as this could cause serious damage to all rubber parts in the brake system.

Carefully examine the cleaned parts for nicks, burrs, stripped threads, or other damage. Make certain that the small compensating ports in end of hydraulic piston are clear. If these ports are plugged, clean them thoroughly and flush the hydraulic system to remove all dirt.

If the outer surface of the air valve or the hydraulic piston show evidence of abrasion, polish out light scores with crocus cloth or very fine polishing paper, then wash and dry thoroughly.

If any parts indicate that heavy abrasive action has resulted from severe contamination of the brake fluid, replace damaged parts and be sure to thoroughly flush the reservoir and wheel cylinder lines.

Make sure that the loose pin is properly retained in vent hole in flange of hydraulic cylinder body, and that vent hole is clear.

Do not remove push rod from air valve unless one part is damaged so that replacement is required. To unlock the push rod, prepare a piece of 3/16″ steel rod about 7″ long by filing fiats on one end to reduce size to 5/32″, then use as a punch to bend both arms of push rod lock as shown in figure 9-23. 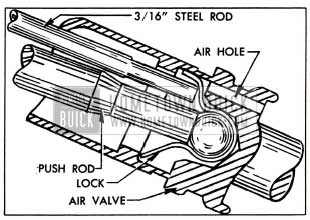 Grip hex of push rod in vise and pull on air valve to separate these parts, then insert thin metal strips through air holes in valve to remove the lock. Use care to avoid damaging the annular seat on air valve.

The 1955 Buick Power Brake Cylinder Overhaul Kit (Group 4.898) contains all necessary replacement parts for the power brake cylinder. When reassembling the brake cylinder use all the new parts in the kit regardless of whether the old parts appear fit for use. In addition, replace any other parts which inspection indicates to be unfit for use.

NOTE: Refer to figures 9-13 and 9-14 for identification and location of parts not otherwise illustrated.

CAUTION: During assembly make certain that no grease or mineral oil comes in contact with internal parts of hydraulic cylinder. 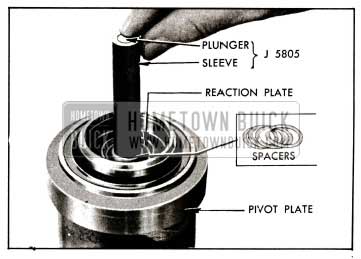 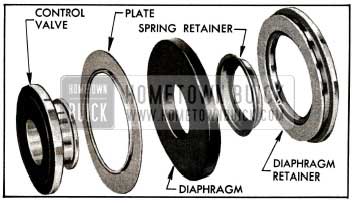 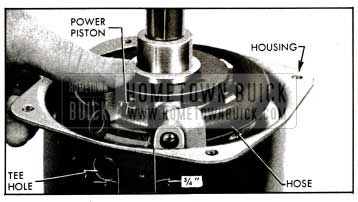 1955 Buick Position of Piston in Housing