The 1955 Buick heater is mounted in the floor of body under the left side of front seat. In contains an electric blower which draws air from the body through the hot water core and recirculates the heated air at floor level. The hot water is supplied directly from the engine water manifold and the volume of hot water is controlled by the temperature control valve described in subparagraph e.

1955 Buick Defroster and Outside Air Ventilation

The air stream flowing over the hood during forward motion of the car enters an air intake duct built into the cowl along the base of the windshield. Two ventilator air duct covers mounted on left and right sides of the dash panel under the hood, redirect the air stream directly into the passenger compartment through air outlets in the dash panel. The volume of air entering the passenger compartment is controlled by fly valves which are connected by bowden wires to control knobs on the instrument panel. Water separated from the air as the air stream reverses direction in the S-shaped passages is caught by a trough and drained through a hose at the bottom of each air duct cover. See figure 11-12. 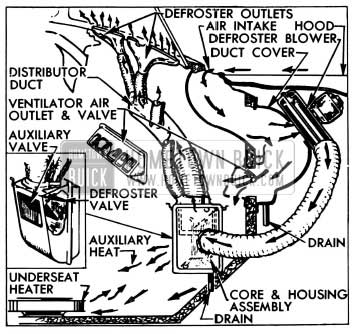 The 1955 Buick defroster blower mounted on the right hand air duct cover is connected by a flexible tube to the defroster core and housing assembly mounted on the right side of cowl behind the cowl trim pad. The 1955 Buick defroster inner housing is connected by a flexible tubing to a distributor duct and four outlets mounted along the base of the windshield. See figure 11-12.

When the 1955 Buick defroster blower is turned on, outside air is forced through the defroster core where it is heated by hot water from the engine and is then forced upward against the windshield which deflects the flow rearward into the body at shoulder level. The volume of air passing through the defroster core is controlled by a fly valve in the 1955 Buick defroster inner housing which is connected by a bowden wire to the middle control knob on instrument panel.

The 1955 Buick defroster inner housing contains an auxiliary valve which may be opened to provide heating from the defroster core at floor level. This valve is connected by a bowden wire to the right hand control knob on instrument panel. See figure 11-12.

The hot water supply for the 1955 Buick heater and defroster cores is taken from the outlet side of the 1955 Buick engine water manifold, from which it is conducted by hoses to the underseat heater, then to the temperature control valve mounted on the dash panel, to the defroster core and finally to the bottom of radiator core.

Hot water flow through the 1955 Buick heater and defroster cores is completely shut off when the temperature control lever is in the “OFF” position. This shuts off all heat when not desired, such as for summer driving. This feature eliminates the need for a shut-off valve in water line at engine.

The 1955 Buick heater blower is controlled by the 3-position toggle switch mounted above the left hand control knob. The blower may be set for “HI” speed or “LOW” speed by setting the switch to right or left position as indicated on instrument panel. See figure 11-13.

Right and left ventilator fly valves in air outlets are operated by the right and left control knobs, respectively. Either valve may be opened by moving its control knob into the “SUMMER” range.

NOTE: To keep out offensive traffic odors and exhaust gases when traveling in congested traffic or when parked behind a car having its engine running, all ventilator and defroster valves must be closed and the defroster blower must be turned off.

Avoid inhaling exhaust gases when any concentration of these is present in the air, i.e., in a garage, in congested traffic, or when stopped closely behind a vehicle with its motor running. Exhaust gases may have strong odors which normally should give warning of their presence. However, the exhaust gases from some vehicles may not be noticeable under certain conditions and the senses of people react differently. Exhaust gases contain a percentage of carbon monoxide, which is a poisonous gas that, by itself, is tasteless, colorless, and odorless.

Locations of the various units of the 1955 Buick Air Conditioner system and their connecting pipes are shown in figure 11-14. 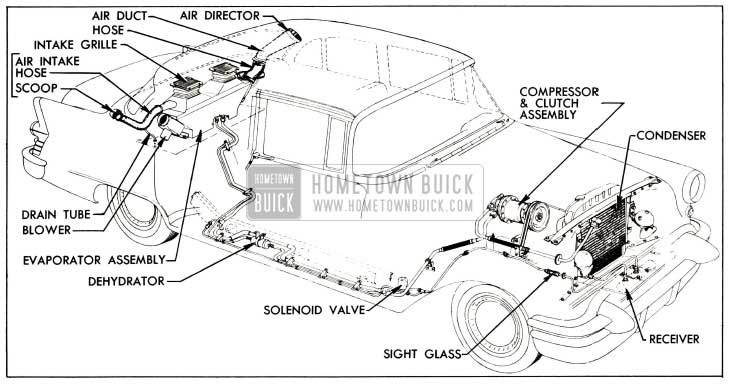 Figure 10-80 shows the electrical control circuits, which are entirely separate from all other chassis and body wiring circuits.

Except for the axial type compressor which replaces the rotary type, the 1955 Buick Air Conditioner installation is essentially the same as in 1954 models. The service information contained in the 1953-1954 Buick Air Conditioner Shop Manual (B.P.S. 7.26) is generally applicable to the 1955 Buick installation except for the compressor service operations given in paragraph 11-8, below.

Any service work that requires breaking a pipe joint should be performed only by mechanics who have been trained in Buick or other automotive air conditioning schools. Whenever a pipe is disconnected from any unit except the compressor, liquid or vaporized refrigerant will escape unless the proper procedure is used. Any work involving the handling of refrigerant requires special equipment and a knowledge of its proper use. 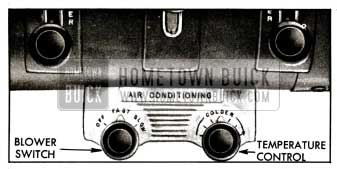 To start 1955 Buick Air Conditioner operation, turn the left hand switch knob to “FAST” or “SLOW” as required by car temperature. For maintaining comfort after car is cooled down, the “SLOW” fan speed should be used except in the most extreme summer heat.

The temperature level of the air supply may be set at any point between 67° and 80° F. to suit the personal comfort of car occupants. This is done by turning the right hand knob (fig. 11-15). The first movement of the knob from the extreme counterclockwise position turns on the temperature control circuits and energizes the compressor clutch solenoid, placing compressor in operation. After a click is heard, further movement clockwise operates the rheostat to vary the temperature setting.

It is not necessary to set the temperature control to coldest position in order to cool out the car. When the knob is set for the desired temperature level, the Air Conditioner will soon bring the interior temperature to that level and will maintain it until the knob is given a different setting.

If car has been standing in the sun it may be aired out by opening doors and windows. When the Air Conditioner is stared, however, all windows and ventilators must be closed in order that all outside air entering the passenger compartment will be admitted only through the Air Conditioner.

Distribution of cooling air is controlled by an air director on the upper end of each transparent 1955 Buick air duct above the parcel shelf. The air director may be rotated to direct cooling air in any desired direction.

NOTE : Before the engine is raised or lowered for any service operation the high and low pressure valves with lines attached must be disconnected from 1955 Buick air conditioning compressor, as described in subparagraph a, steps 1 through 6. 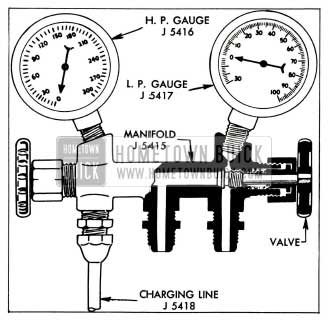 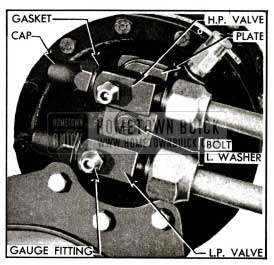 Do not place compressor in sun or near heat because it still contains some Freon-12. 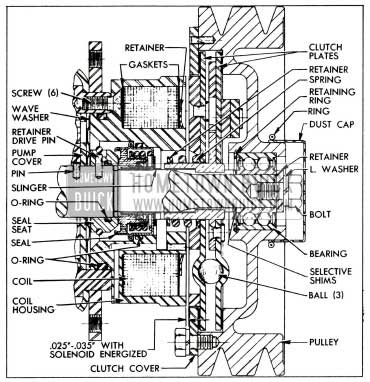