Checks are to be made with 1957 Buick frame assembled with power plant, body, etc. and car resting on wheels. The car should be placed on a clean floor that is reasonably level. Both sides of the front ends of the frame must be the same distance from the floor; the same condition must exist at rear end of frame. Where points are to be extended to floor by use of a plumb bob, it is desirable to attach clean pieces of paper to floor with tacks or tape so that the points can be clearly marked. Apply brakes or block wheels so that car cannot move.

Checking Alignment of 1957 Buick Frame Only 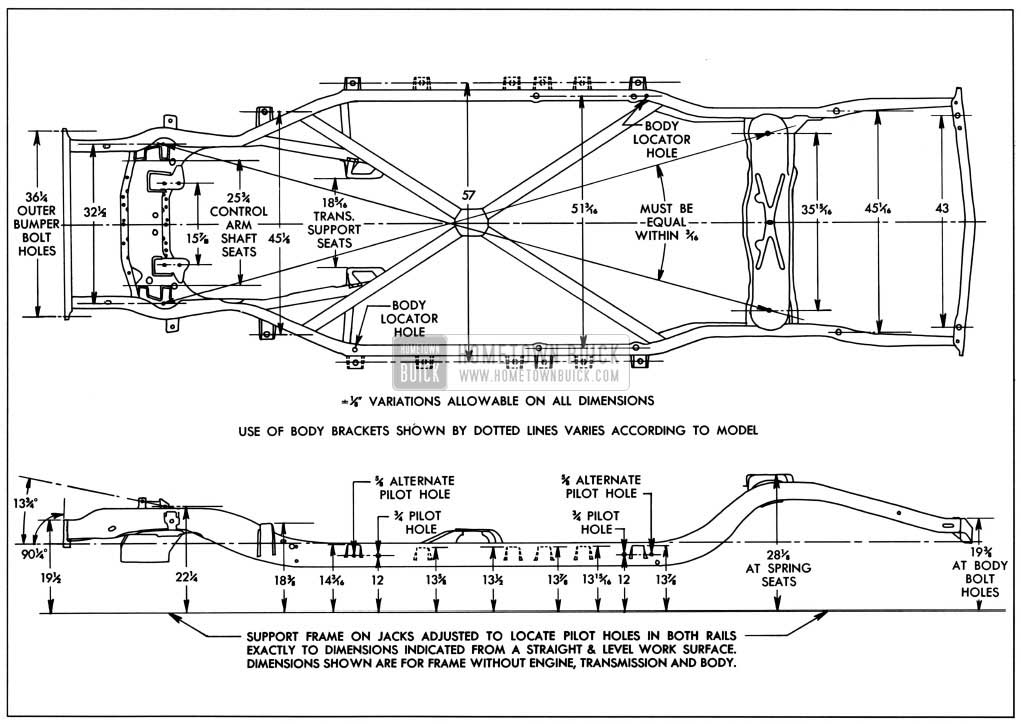 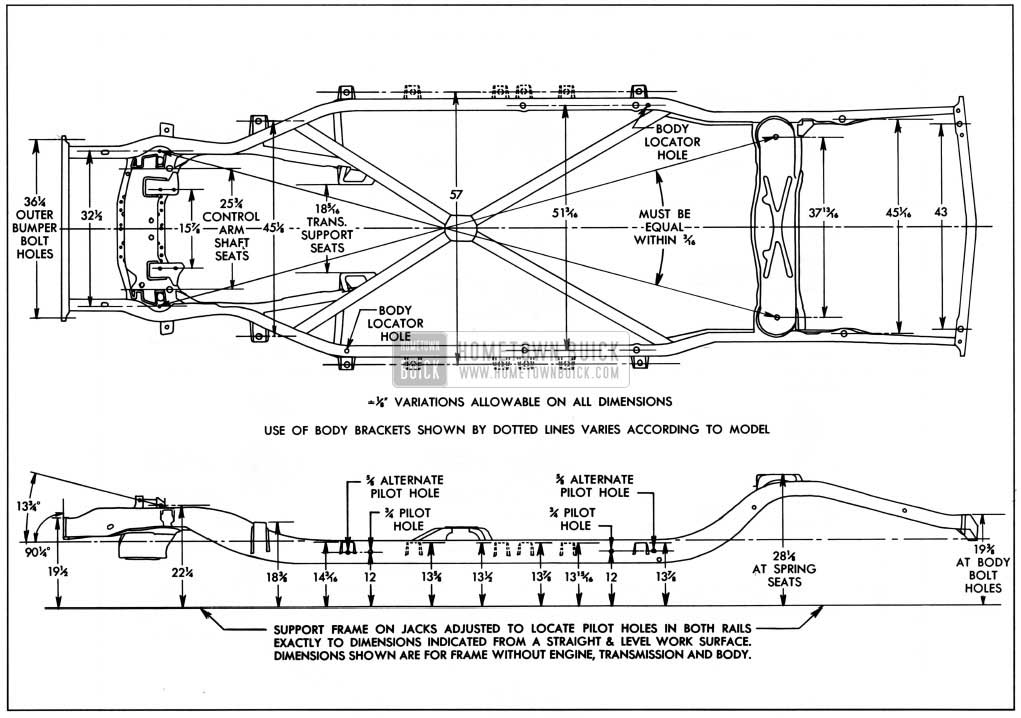 The 1957 Buick frame must be solidly supported on suitable stands so that the pilot holes in both side rails are exactly at distance indicated from a straight and level work surface. Note that alternate pilot holes of different size and location may be found.

In case of frame distortion resulting from an accident it is permissible to straighten or weld the 1957 Buick frame if the distortion is not excessive.

The front end and rear cross members, rear spring support cross member, and a number of braces and brackets are available for service replacement. The old members may be removed from the 1957 Buick frame by cutting the attaching rivets and welds, after removing other parts or assemblies to allow working space.

After installation of any new frame member check the frame for proper alignment as described in paragraph 12-1. After any repairs or replacements in front end of frame be sure to check front wheel alignment (par. 7-17).

At each closed body mounting point a rubber shim is placed between the body and frame, a rubber insulator washer is placed under the 1957 Buick frame side rail flange or hanger, and flat steel washers and a tubular spacer limit compression of the rubber parts to a predetermined amount as the body bolt is tightened. See figure 12-4. This form of mounting eliminates metal-to-metal transmission of road and chassis noise into the body. 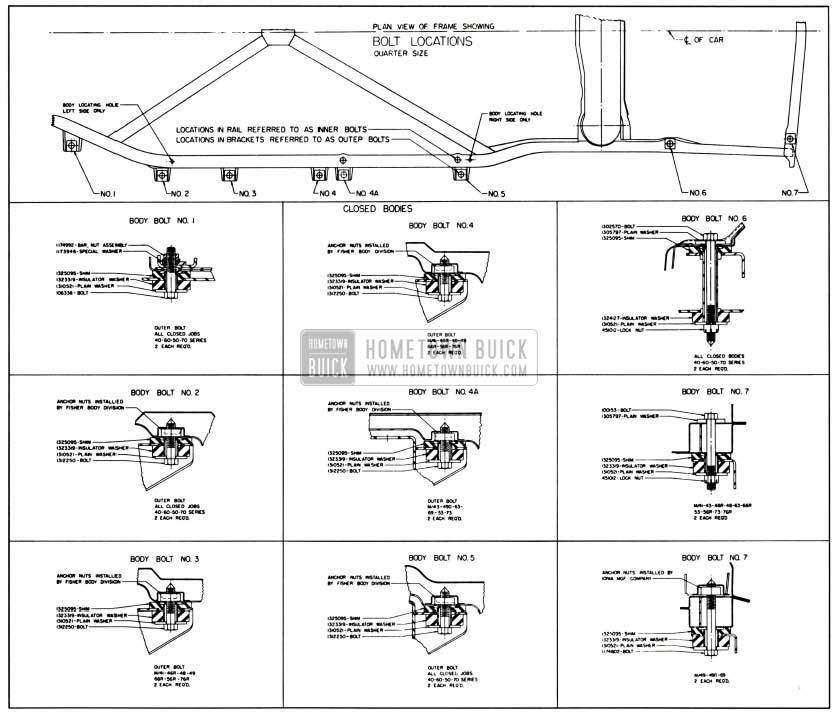 At each convertible coupe mounting point a solid composition shim is placed between the body and the 1957 Buick frame, and a flat washer and bolt anchors the body to the frame. See figure 12-5. 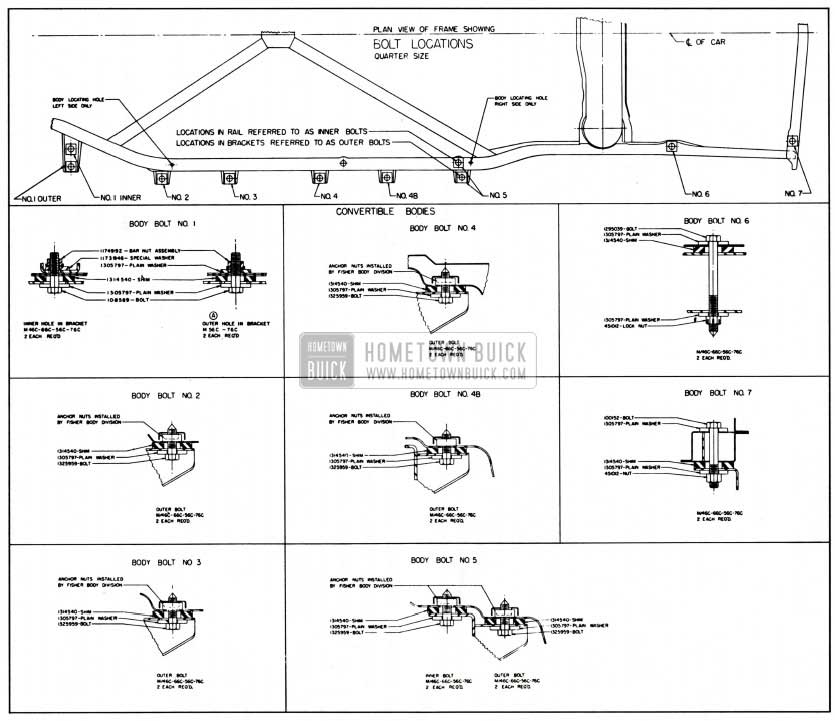 In addition to the parts shown in figures 12-4 and 5, steel shims are added as required at individual mountings to compensate for variations in body and 1957 Buick frame in order to insure a firm mounting without distortion of body. Whenever it becomes necessary to remove body mountings, care must be taken to reinstall all of the mounting parts and steel shims in their exact original positions.

Closed bodies should not be re-shimmed to correct distortion of door openings. These openings should be shaped as required by the use of body jack. The body should rest firmly on all mountings before bolts are tightened and steel shims should be added where body does not contact a mounting. Shims for this purpose are furnished under group 9.023.

Convertible bodies may be re-shimmed in cases where door locks do not latch securely after door is properly adjusted in body opening. In such cases, shims placed under the ends of body will close in the body door opening sufficiently to insure proper latching of door locks.

When body bolts are tightened use a torque wrench to tighten all bolts uniformly to 25-30 ft. lbs. torque. The specified torque is very necessary to insure proper compression of convertible body mounting shims, and to insure tightening against the spacers in closed body mountings. Excessive tightening must be avoided as distortion of mountings will result. 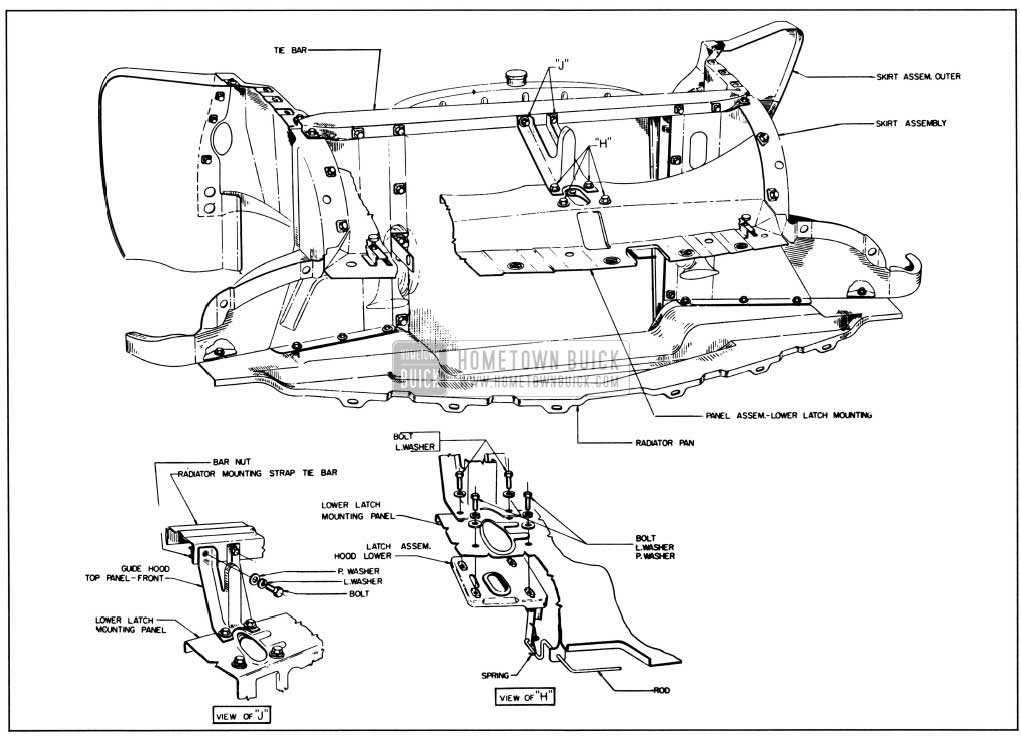 All parts are joined together in an assembly that may be removed and installed as one unit, or the separate parts may be replaced without difficulty. The front end of the sheet metal assembly is supported and stabilized by attachment of the fender skirts to the 1957 Buick frame side rails by means of bolts provided with rubber shims similar to 1957 Buick body mountings. See figure 12-7. The rear ends of front fenders are attached directly to the body cowl. 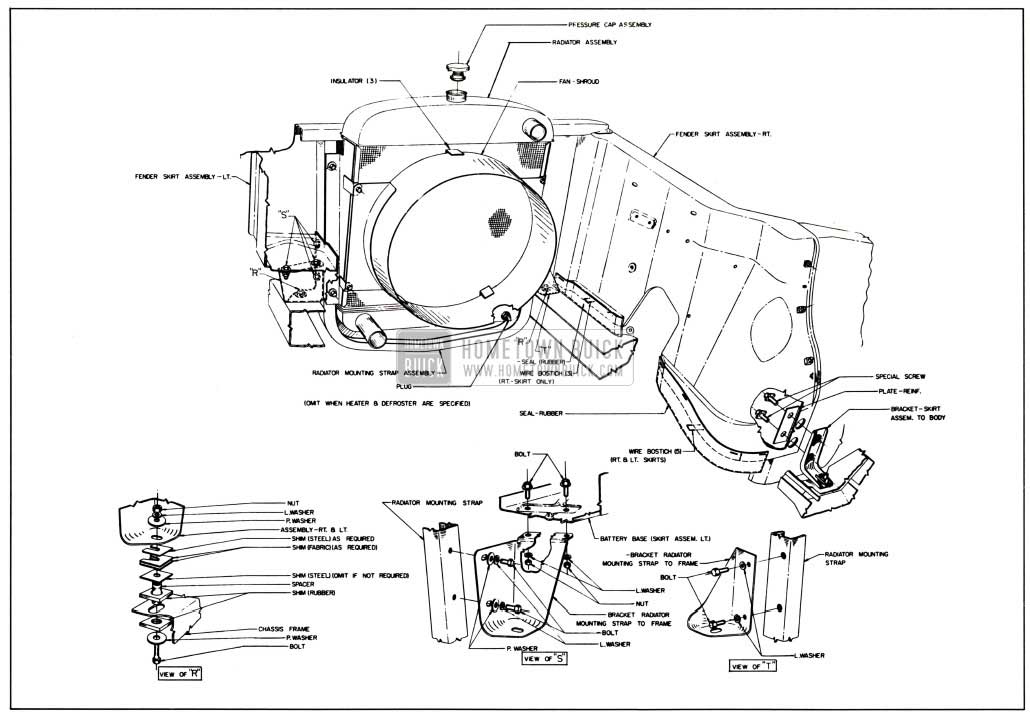 The 1957 Buick rear end of the hood is attached to the body cowl on each side by hinge assemblies which permit the front end of hood to be raised, alligator type. A heavy coil spring connected between each hinge assembly assists in raising the hood, and holds it in the open position. The springs exert a downward pull when hood is in closed position. See figure 12-8. 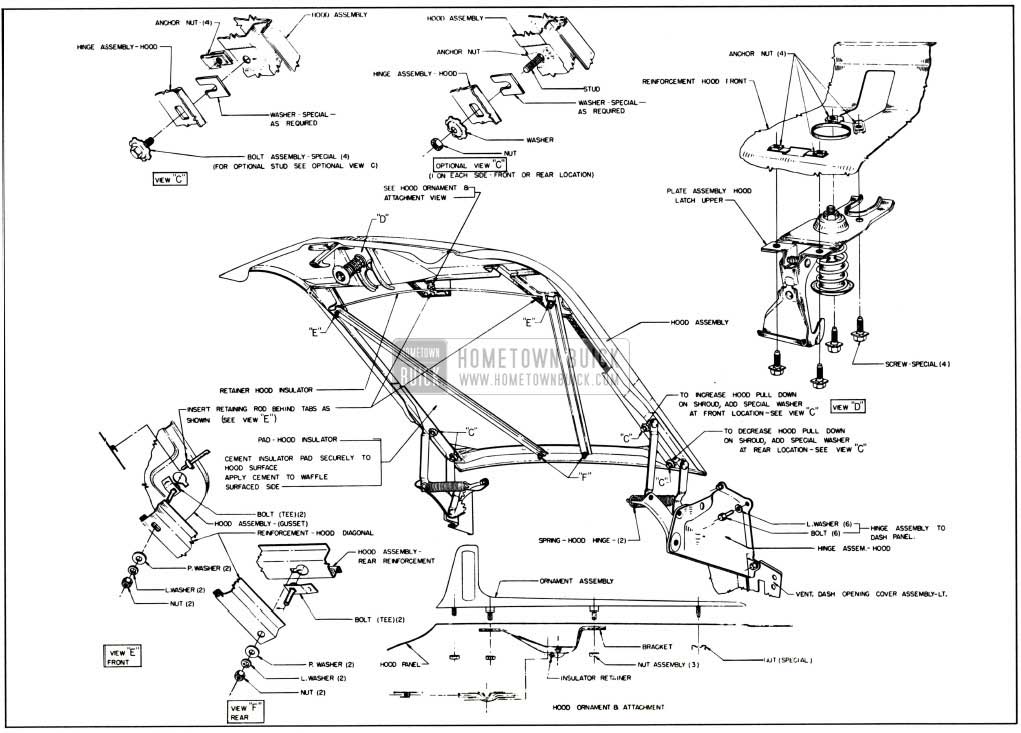 The front end of hood is locked down by a dovetail bolt on hood which engages a lock lever in the latch mounted on a panel of the front end sheet metal assembly. Proper tension on the latching parts is maintained by a spring and retainer which surrounds the dovetail bolt (fig. 12-8). The hood is unlocked by lifting a release lever located beneath radiator grille frame. A safety hook mounted on the hood must then be pulled forward before the hood can be raised.

The 1957 Buick hood, front fenders and bumper must be aligned with each other on every car to take care of slight variations in form and dimensions of the individual parts. Sheet metal parts stamped in a given set of dies will vary somewhat in form and dimensions due to variations in the hardness of different batches of sheet metal, which cause the stampings to spring in varying amounts when released from the dies.

The hood and front fenders are properly aligned during the installation at the factory; however, some readjustment may be required after a car has been shipped or has been in service for some time. This is because sheet metal parts may take a different “set” as a result of vibration and shock incident to shipping or operation during the break-in period. In judging the need for readjustment it must be understood that exactly uniform fit and spacing cannot be obtained on all cars of a given model.

If the 1957 Buick hood squeaks, check with 1/16″ thick feeler all around the hood for clearance at radiator grille frame, fenders and cowl. If an edge of metal is making contact at any point where clearance should exist a bright metal spot will usually be found. Such spots may be depressed by spring hammering to provide clearance.

A grunting noise in the hood is usually caused by dry rubber bumpers or cowl ledge lacing. Lubricate all rubber bumpers on fender rails and cowl with Lubriplate. To correct a persistent case of squeaking or grunting where hood top panel contacts ledge lacing, even when lubricated, cement a 1/16″ thick strip of felt to panel where the lacing makes contact.

To prevent hood panel flutter, the rear end of hood panel must have firm contact with the rubber lacing attached to cowl ledge. The hood may be raised or lowered by adjustment at hinges. See figure 12-8.

Where spacing between rear end of front fender and edge of door is objectionably uneven from top to bottom it may be necessary to adjust the shims between 1957 Buick frame rails and the sheet metal supports on front fender skirts. See figure 12-7.

When closed and locked, the 1957 Buick hood should bear firmly against the rubber bumpers on lower hood latch mounting panel and the rubber lacing attached to the cowl ledge.

Raise and lower the front end of hood slowly several times to check for proper alignment between the dovetail bolt in hood and the latch on sheet metal panel. Dovetail bolt should enter the opening in latch without any side strain or other interference. See figure 12-8.

At the point where each front fender skirt support is attached to frame rail a rubber shim is placed on each side of the 1957 Buick frame rail top flange, with a steel washer 1/8″ steel shim and tubular spacer placed to control compression of the rubber shims as the bolt is tightened. Two steelbestos shims are placed between the 1/8″ steel shim and the fender skirt. When additional shimming is required one or more extra steel shims .060″ thick are placed between the steelbestos shims and the fender skirt. See figure 12-7.

The front bumper attaching bolt holes in frame front cross member are slotted vertically to permit raising or lowering either end of the bumper for proper alignment with adjacent parts. Special shims are available for insertion between the bumper back bar and frame cross member to move bumper forward as may be required for proper alignment with adjacent parts.

Too much tension is indicated if the rear area of the hood bends as it is closed. To decrease tension, add shims between the hood and the hinges at the rear bolts.

To adjust the latch bolt, loosen the jam nut on the upper end and turn the bolt by means of the screwdriver slot in the lower end. Then tighten the jam nut and close the hood to recheck latch tension.