When the 1957 Buick horn button contacts are closed, a small amount of current flows through the relay winding to ground at the horn button. This magnetizes the relay core, which attracts the flat steel relay armature. The armature has a contact point which makes contact with a stationary point to close the horn circuit. When horn button is released, current stops flowing through relay winding so that the core loses its magnetism; the armature spring then causes contact points to be separated.

The 1957 Buick horn button used with the Series 40 standard steering wheel has a cap with a rubber retainer in its rim which snaps over the rim of a contact cup mounted in the wheel hub. The cap may be pried out with a thin bladed tool and the contact cup and other parts may then be removed by removing the attaching screws and insulating spacer bushings. 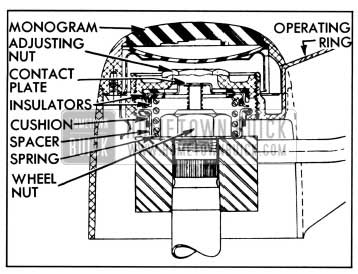 Install operating ring by reversing the procedure for removal. The steering wheel nut is self-locking and does not require a lockwasher. When the contact adjusting nut is being installed, turn it down until contact is made and horns blow, then back nut off 1/4 turn to provide proper clearance between contact plate and spacer.

When 1957 Buick horns fail to blow, first check wiring circuit (par. 10-12, c) and relay (par. 10-53) before attempting to adjust horns. If 1957 Buick horns are at fault, or tone is poor, adjust each horn for specified current draw as follows: 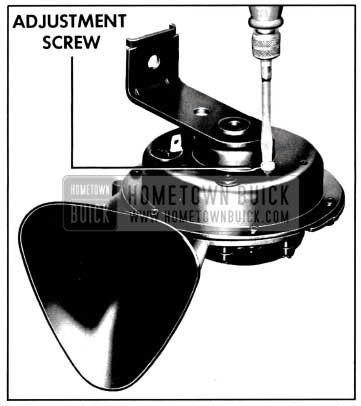 Increasing the current draw increases the horn volume. Too much current will cause a high cut-in voltage, which will cause a sputtering sound and may cause horn to stick in cold weather.

To check for a defective horn relay follow the procedure in subparagraph a or b below.

1957 Buick Horns Will Not Blow

1957 Buick Horns Will Not Stop Blowing

When the ignition switch is turned on and the direction signal switch is manually operated to indicate a turn, the front and rear signal lights flash on and off on the side of car for which a turn is indicated. The flashing of signal lights is caused by a flasher which is connected into the proper signal circuit by contacts made in the direction switch when switch is set for a turn. There are two circuits within the flasher; one supplies impulses for the front and rear signal lights on either side, and the other circuit supplies impulses for either indicator bulb on the instrument panel.

When the 1957 Buick direction signal lights are flashing, a signal indicator bulb on instrument panel also flashes, producing a small arrow of green light to indicate the direction for which the signal has been set.

Bosses in the housing provide stops for the plate when set for either turn. See figure 10-64. 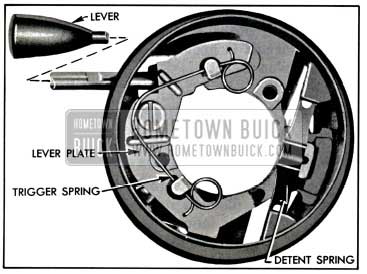 The Boden wire has a loop in its lower end which engages a bakelite pin projecting from the under side of the sliding part of the direction signal switch. The movement of the Boden wire and switch slide is not adjustable, therefore any adjustment must be made by moving the switch housing up or down the steering column jacket. See subparagraph d for the adjustment procedure.

When a front or rear signal bulb is burned-out, indicator light for that direction will flash once briefly and then remain off. This immediately notifies driver when any signal light quits operating. 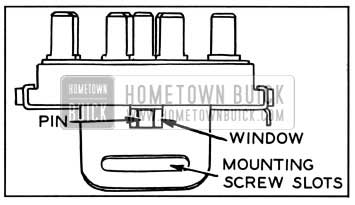 Pin can be accurately centered by holding a light in back of switch while sighting through window. Tighten switch mounting screws.

Since the 1957 Buick direction signal lights are independent of the headlamp lighting switch and thermo circuit breaker, the wiring circuits are protected by a “DIR. SIGNAL” fuse on the fuse block under the cowl. The flasher is also mounted on the fuse block, which serves as a terminal block between the signal switch and the chassis wiring. 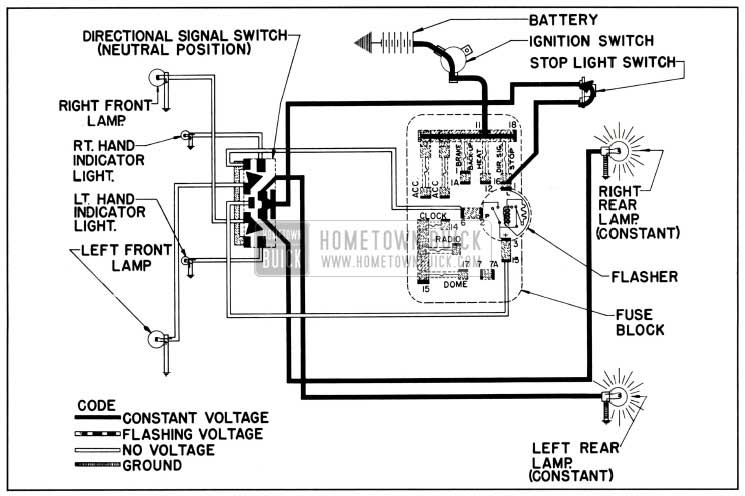 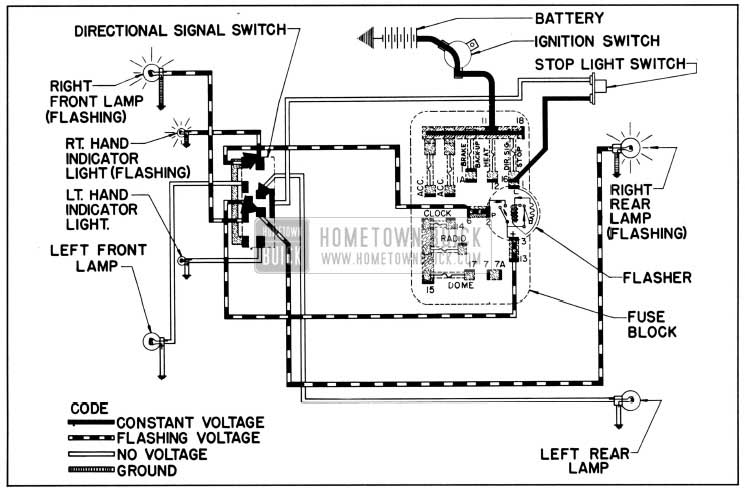 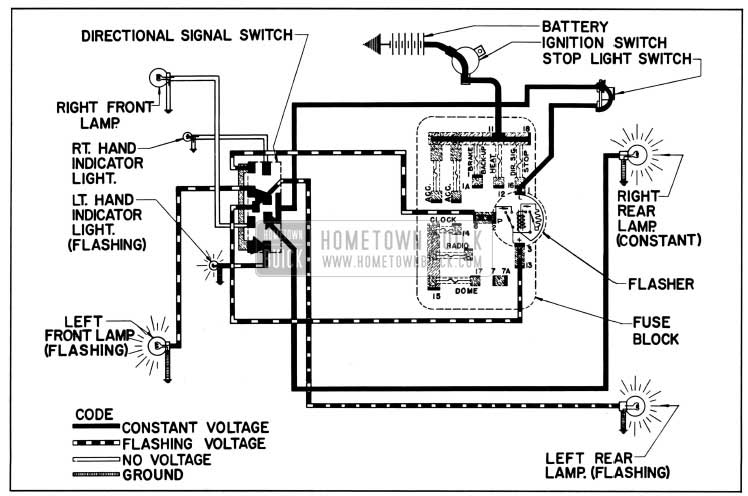