The most satisfactory method of preventing a paint “scrubbing” condition between the hood and front fenders on 1949 Series 50 and 70 cars is to install 1950 type hood guides and spacers. This installation will also simplify hood alignment because it automatically spaces the split line between the hood and fenders.

Installation is made as follows: When correctly installed, the guides and spacers will require a slight pressure to fully close the hood and will serve to hold the hood in correct alignment when closed.

AFA’s will not be accepted for installation of these parts.

Approximately March 15th, the hood fastener and hinge assembly on all Series 1950 jobs will be changed in production to an inside opening type. Although the new mechanism is similar to that used on 1949 models, several improvements have been made, particularly in the method of adjusting the hinges. The adjustment procedure also differs from that used with 1st type 1950 assemblies having the outside handle opening feature.

Use of the new hinge and fastener assembly also involved redesigning of the fender rails, fender skirts and hood. As a result, it will be necessary, to assign 1st and 2nd Type part numbers to the skirt and hood assemblies, as follows:

Due to the fact that 1st and 2nd type fender rails are easily made inter­ changeable for use with either type hinge and fastener assembly, fender part numbers will not be changed. 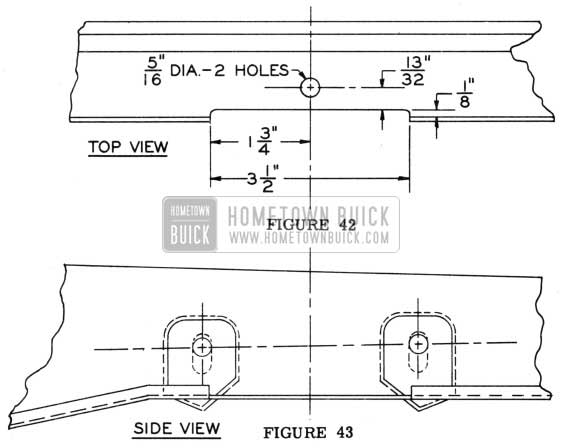