The content of this page is based on the 1953 Buick Dynaflow Transmission brochure. Buick’s Dynaflow Drive has always been the smoothest of all automatic transmissions – since all powerthrust from engine to wheels is transmitted through a cushion of oil.

In other automatic transmissions the emphasis has been on acceleration rather than smoothness. But it has never been possible before to step up acceleration importantly without the use of shifting gears-gears that give you a surge-and-pause, surge-and-pause type of pickup.

Now, Buick’s new 1953 Buick Dynaflow Transmission revolutionizes the picture. Today, with this entirely new Dynaflow development, you get record acceleration from stop to go with complete absence of jerk or lurch.

What happens is this: the new Twin-Turbine design steps up Dynaflow’s velvet flow of power at the lower speed ranges- gets you off from zero to cruising range in a flash, with no feeling of slippage or engine racing.

Actually, its acceleration is increased 20% to give you this jet-like getaway. Yet you still enjoy, through all speed ranges, the silk-smooth delivery of power that has already made Dynaflow so popular with more than a million Buick owners!

YOU’RE SMOOTHLY UNDER WAY-IN A FLASH – Just set the selector lever in DRIVE position, feed as much gas as you like – and off you go, with a thrilling sense of pickup! You’ll note that your acceleration is all one smooth, uninterrupted whoosh – there is no pause while gearshift ratios change themselves, under the floor boards. Nor do you have to lift your foot to let an overdrive come into play. Dynaflow contains, within itself, an infinite number of ratios, with oil-driven turbines automatically giving you the right ratio for lightning getaway, smooth acceleration, and cruising with maximum economy. You’re always in the right driving range, automatically.

WHEN YOU STOP  – Dynaflow’s unmatched smoothness will give you a real glow of pleasure, even in slowing down. Raise your foot from the gas, and the speedometer needle will move down to lower speed – but there’s no lurch, no feeling of pitching forward. And you don’t have to shift Dynaflow when you stop.

ZOOM OVER THE HILLS – No longer do you have to rush at a hill, getting up speed before you hit the bottom. As you reach the hill, just feed more gas, and the Twin-Turbine Dynafiow will adjust itself to give the extra thrust you need.

INCH-BY-INCH CONTROL – On extremely steep hills  -or in rough, bumpy going, like parking in a field -remember that Dynaflow’s LOW range will provide tremendous power at very slow speed, so you can move with effortless sure control.

ENGINE BRAKING – When you are going down a really steep, long hill, the kind where trucks will shift into first gear to save their brakes, you too can avoid wear on your own brakes by going into LOW range. It’s all right to shift into LOW at any speed under 40 miles an hour.

BACKING UP-Lift the Dynaflow lever and slide it into REVERSE. Feed the gas gently, for this is a powerful setting. Note that you can move the 1953 Buick Dynaflow Transmission control lever freely back and forth between DRIVE and LOW. However, you lift up the lever to move it into REVERSE or NEUTRAL or PARK. This is a safety measure to avoid slipping into the wrong setting by error.

SLIPPERY WEATHER – With the new 1953 Buick Dynaflow Transmission you have a tremendous advantage in safe, easy handling of your Buick on slick streets-as you can readily see when you consider the basic problem in avoiding skids. The whole secret is not power, but traction or “grip.” You want to feed power very gently to your rear wheels so the tires don’t lose their grip on the slick surface of the road. So keep the Dynaflow in DRIVE range-don’t use much gas, or the extra power of LOW range- and you’ll find, because of Dynaflow’s smoothness, you have better control than you’ve ever had before. And since Dynaflow doesn’t go through different “steps” or self-shifting gear changes like other automatic transmissions, you have an additional asset – it won’t “down-shift” as you slow down, and catch · you by surprise with an unwanted low gear ratio.

STARTING A HEAVY LOAD – To get a trailer rolling, or start an unusually heavy load up a steep driveway, or push some other car with a dead battery – in any situation where you want a lot of brute power at low speed, use LOW range. This “emergency low” setting is also fine for moving without effort through any sort of rough going deep ruts, bumpy country trails, open fields, and so on.

STUCK IN MUD, SNOW, SAND? – Best way to get out is to “rock” the car backward and forward several times, letting the car build up more momentum on each surge. No transmission in the world makes this so easy as Buick’s Twin-Turbine Dynaflow. You simply run the engine slightly above idling speed, raise the 1953 Buick Dynaflow Transmission lever, and move it back and forth between LOW and REVERSE – with no change in engine speed.

DEAD BATTERY – Here is how to start the engine by pushing the car. Turn the ignition on and let the other car push you up to a speed of 15 mph in neutral, then shift into LOW and continue to increase speed until the engine cranks. It should crank and start before 25 mph.

Those five large, clear, easy-to-read letters show the five things that the 1953 Buick Dynaflow Transmission does for you – Park, Neutral, Drive, Low and Reverse. The new Dynaflow lever rolls easily from one position to another. You can shift back and forth between DRIVE and LOW simply by pushing the lever to left or to right – but for safety’s sake, you need to lift the handle toward you before you can shift into REVERSE, NEUTRAL OR PARK.

PARK will lock the rear wheels. Use it only when completely stopped, as a second safety measure in addition to the StepOn parking brake.

NEUTRAL puts everything “out of gear” -the car will roll freely, regardless of whether the engine is running or not. (Note: a special safety device prevents the starter from operating unless Dynaftow is in PARK or NEUTRAL.

DRIVE is for all normal driving. In .this position, you can stop or drive at any speed you wish-for hours on end-until you want to back up or turn off the engine.

LOW is an “emergency low” range, with tremendous power. It is useful for the following conditions –

REVERSE moves you backwards, also with a lot of power. Since you have no clutch pedal to worry about, you are free to use your left foot for the brake pedal.

How you save with Twin-Turbine Dynaflow

SAVE MAINTENANCE AND REPAIR – There is no conventional friction-clutch in Twin-Turbine Dynaflow to ever need expensive replacement. Because of Dynaflow’s easy, oil-cushioned transfer of power from engine to axle, you can forget about costly repairs to transmission, rear end or rear axle. By and large, the only maintenance the 1953 Buick Dynaflow Transmission needs is a periodic check of the fluid level.

PROLONG ENGINE LIFE – The same oil-cushioning action of Dynaflow eases all strains on the engine as well, so it keeps its new-car liveliness much longer.

INCREASE TIRE MILEAGE – In gear-type transmissions, whether automatic or manually operated, the sudden pull of starting a car from standstill will often wear more rubber off your tires than many miles of driving on the open road. But Twin-Turbine Dynaflow applies power gently, without a sudden thrust – so tires last longer.

SAVE GASOLINE – All Dynaflow-equipped Buicks carry two moneysaving features-compression ratio is higher, and rear axle ratio is lower, than on non Dynaflow models. Higher compression gives more miles per gallon of fuel-and the lower rear axle ratio adds further to this economy. But if you want to save money on gasoline, look to your own driving habits. Avoid jack-rabbit starts, high speeds, sudden stops. Don’t drive with a “competitive attitude,” trying to beat others on every hill or traffic light. And, of course, have your Buick dealer check your engine over twice a year – to make sure the timing, carburetion, spark plugs and other precision parts are all operating at the high efficiency which gets the most mileage out of each gallon. If you were to take apart the new 1953 Buick Dynaflow Transmission, the elements could be lined up like this. The big rounded part at the right is the Pump, and also acts as a housing which contains the two light-colored Turbines next to it. The flat piece on the far left is bolted on as a cover, and the whole unit is filled with oil.

This largest unit, the Pump, has a system of flues inside fanning out from the center to actuate the oil. The Pump is fastened right to the engine and always turns with it. It is not fastened to the shiny shaft you see running through the middle – this shaft is driven by the two Turbines, and in turn it transmits power to the axle and rear wheels.

As you feed gas to the engine, the Pump spins around; the oil inside follows the flues from the center to the outside, so that it is thrown with great force against the vanes, or blades, of the two turbines. The force from the oil on the first turbine blades is increased by the planetary gear set producing a maximum torque multiplication of 2.45:1 which provides a tremendous thrust to the propeller shaft – for quick acceleration, or for starting a heavy load.

The oil, having done its work against the Turbine blades, returns through the center vanes to the Pump, where it is continuously sent whirling back to the Turbines with renewed force.

As the car speed increases, however, a different balance of forces takes place. The fluid forces on the first turbine vanes gradually diminish as the fluid forces on the second turbine vanes increase until the second turbine carries the full load. At this time the planetary sun gear and stator start to free wheel and the unit is operating as a coupling transmitting torque at a 1:1 ratio.

The various stages of these operations do not occur at any set car speeds. They change in response to more or less power applied by the engine, and more or less load imposed on the propeller shaft by hills, acceleration, and so on.

At any change in your driving situation (such as a quick spurt to pass another car) the Twin Turbines of Dynaflow automatically, instantly, smoothly adjust the flow of power to meet your demand. It is like having an infinite number of gear ratios from which to select your power rating – with a foolproof magic brain to do the selecting. 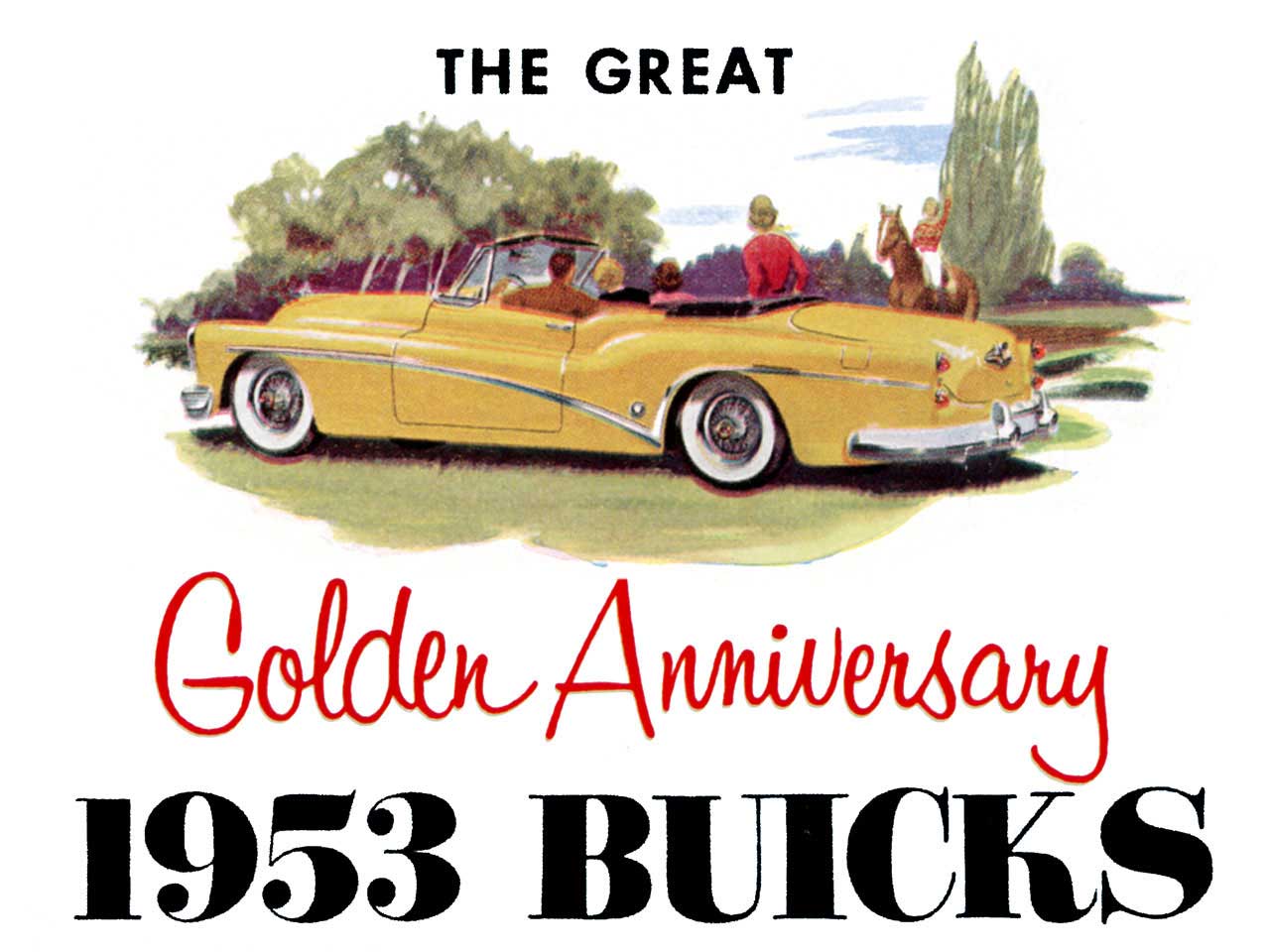