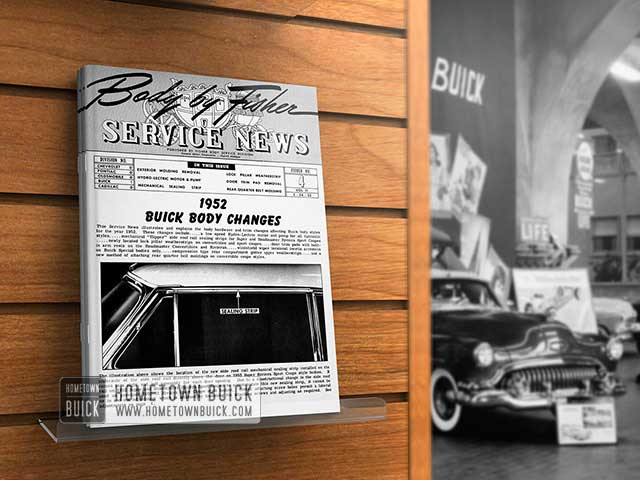 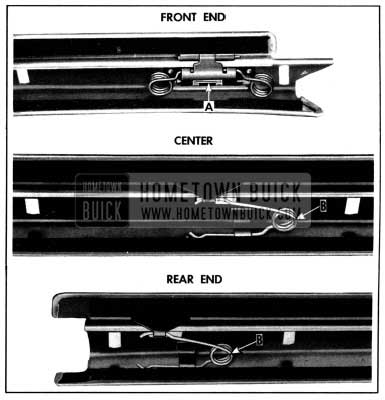 The opposite illustration shows the operating principle of the flipper type sealing strip. In the process of closing the door, the top of the door ventilator frame “A” engages against the striker on the sealing strip indicated at “B” which actuates tension spring “C” in the channel and causes the hinged section “D” of the sealing strip to “flip” downward to form a compression type channel as shown in the next illustration. 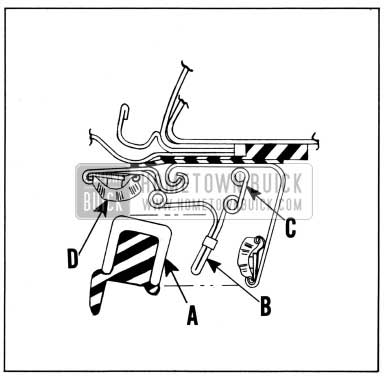 This illustration shows the position of the sealing strip when the door is fully closed. The hinged section of the sealing strip has flipped downward and is held by compression against the outer surface of the chrome window channel and ventilator frame. When the door is opened, the hinged section by spring tension “flips” upward as shown above to allow door clearance. 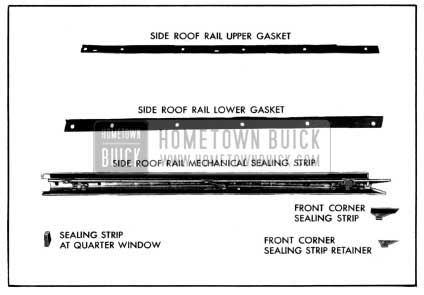 The above illustration indicates the parts and part names of the side roof rail mechanical sealing strip assembly. For installation to the 1952 Buick body, the gaskets are assembled to the flipper sealing strip and the whole assembly is then installed to the body as a unit. 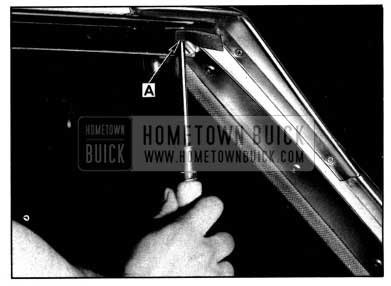 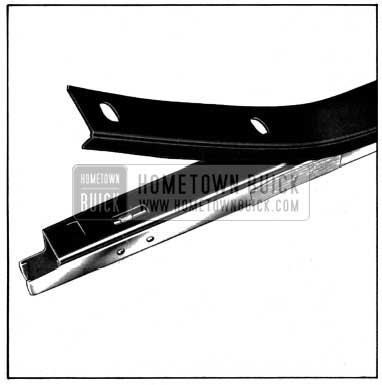 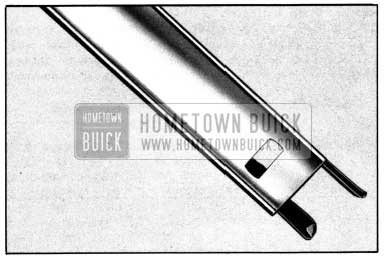 The attaching screw holes in the chrome mechanical sealing strip are slotted laterally to allow in or out adjustment for alignment with the top of the door window and door ventilator. To adjust, simply loosen the attaching screws and move in or out the desired amount, then tighten screws again. VERY IMPORTANT: If the flipper on the sealing strip has a tendency to bind or is slow operating, loosen the attaching screws, one at a time until the screw causing the bind is located and the “flipper” snaps up to its proper tension, then correct and check door clearance as explained below. Do not swage or hammer the sealing strip. Do not pry with a screw driver. Do not tamper with the spring mechanism. Such abuse will damage the mechanism and render it inoperative. 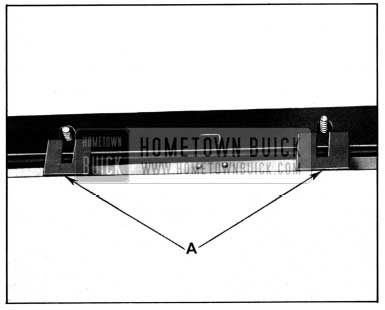 IMPORTANT: The mechanical side roof rail sealing strip must be installed to the underside of the roof rail on a true flat plane so that the “flipper” or hinged portion is free operating. ‘If a “bow” occurs in the long “flipper” hinge after installation, it might result in a binding or slow operating flipper which could become seriously damaged when the door was opened or closed. During installation, all rubber gaskets must be cemented flat without “puckers.” Cement application must be of uniform thickness and attaching screws must be drawn to uniform tightness. To compensate for any slight variation that might cause a binding flipper hinge, slotted shims or spacers can be made from waterproof cardboard as illustrated. After loosening the attaching screws at the “bowed” section, shims can be inserted between the upper gasket and side roof rail so that the slot in the shim straddles the shank of the attaching screw as shown in opposite illustration at “A”. 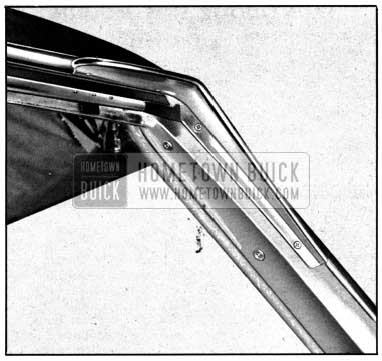 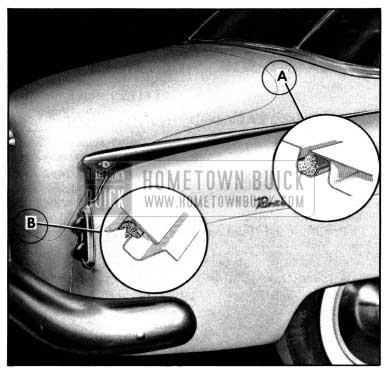 The rear compartment lid has been redesigned on all “45” and “47” series body styles. This change consists of raising the lid top surface to give a new appearance to this area of the 1952 Buick body. Two types of rear compartment rubber weatherstrips are used for sealing the rear compartment lid in the opening. A bulb or compression type weatherstrip is cemented into the gutter at the upper part of the opening, which compresses against the flanges of the lid when closed, see opposite inset “A”. A “lip” type weatherstrip “B” is cemented to the lower and side flanges of the lid which compresses against the gutter of the opening when the lid is closed. The cemented attachment of both rubber weatherstrips is similar to the method used on 1951 models.

The door trim pad on Roadmaster Convertibles and also on two and four door Rivieras is of a new design which incorporates a built-in arm rest. The trim pad and arm rest are removed as a unit as follows: 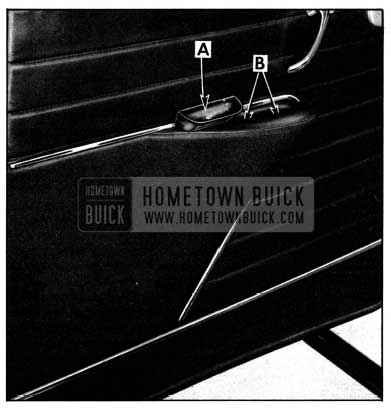 The door side moldings on all Buick styles are in­ stalled to the door outer panel with clip and bolt assemblies. 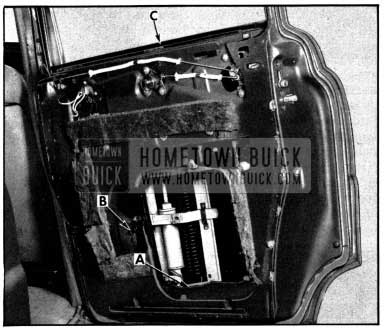 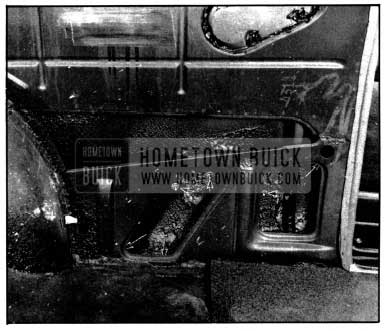 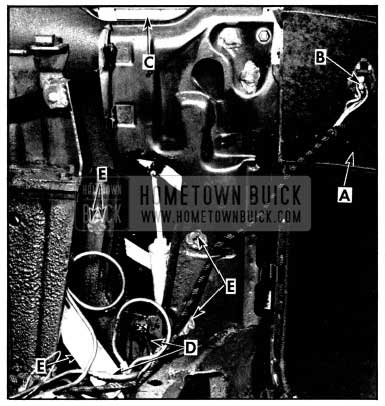 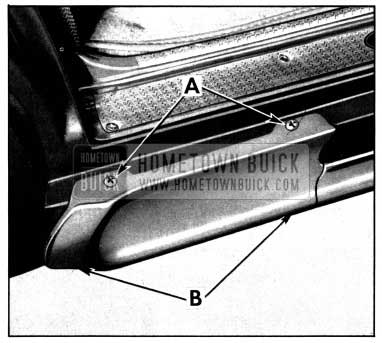 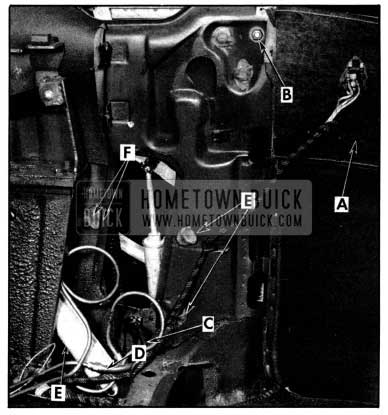 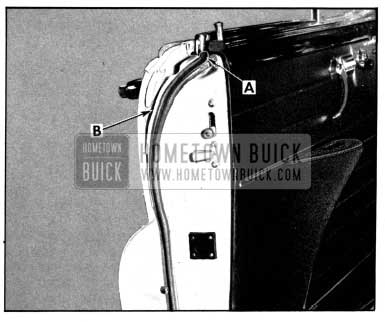 On the windshield wiper mechanism of 1952 Buick Special bodies, inertia arresters have now been added to the drive levers of the wiper motor and transmission which permit a general deceleration of the drive levers at the end of their travel so as to assure quieter operation. A flexible driving junction between the major driver on the motor and the cooperating levers on the transmissions is obtained by connecting the levers through rubber. The openings in the levers are in register with each other and the rubber is put under slight compression with backing discs riveted together through the tubular sleeve. See accompanying illustration.

At the end of each stroke, as shown by the “off” center circles in View 2, the rubber element takes up the shock and permits the motor piston reversal to occur prior to the reversal of the lever. The momentum of the arms and blades is also overcome without any metal to metal impact. The rubber drive link reduces shock and prevents noise. As shown in View 3, after reversal the levers resume their normal in-line position to control the movement of the arms and blades within the engineered limits of travel. Two types of Hydro-Lectric motor and pump assemblies are used on 1952 Buicks. First run bodies are equipped with the same unit as was used in 1951. Later bodies are provided with the new “low-speed” motor which uses an internal and external rotor type pump. This pump is designed for quieter and smoother operation with a ten lobe internal rotor and an eleven lobe external rotor. Two types of internal rotors are used with this “low-speed” motor, the solid rotor and the split rotor. The split rotor is identified by a blue marking on the motor housing. The motor which is a .six volt D. C. motor is mounted in a vertical position as illustrated below. The pump which is attached to the underside of the motor will deliver a maximum pressure of between 250 PSI and 260 PSI. The pressure relief valve is the same type that was used in 1951 Hydro-Lectric styles. 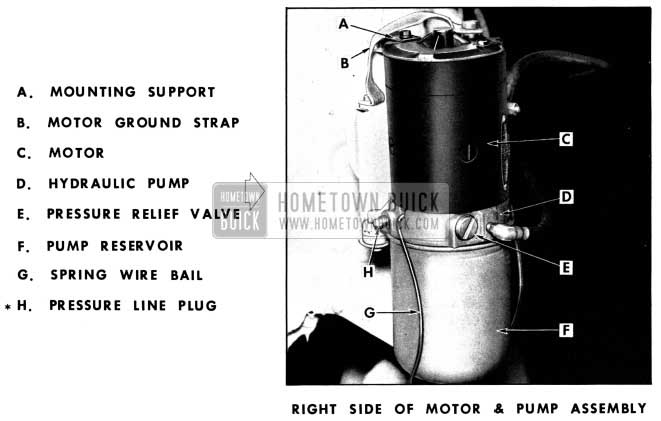 1952 Buick Left Side of Motor and Hydro-Lectric Pump Assembly

* Pressure line plug “H” remains plugged on all styles. Return line “O” is used on convertibles only (for the folding top lift cylinders). On other styles, it is plugged. 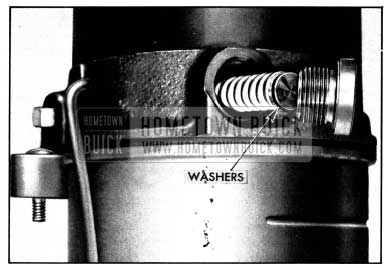 The pressure of the fluid in the hydraulic lines is controlled by a spring loaded pressure relief and flow control valve. When pressure in the lines reaches a maximum of 250 PSI to 260 PSI (e. g., the window reaches the full up position), the relief valve will open and allow fluid to by-pass into the reservoir rather than build up enough pressure to damage the lines. The pressure can be varied by adding washers between the valve stop and the spring as shown to increase pressure or by removing washers to decrease pressure. Under no circumstances should the pressure be changed to provide a pressure higher than 260 PSI. When cleaning or servicing the valve, make sure the same number of washers are added before installing the valve in the pump. A plastic bag is installed to the pump and reservoir with tape in the 1952 Buick body assembly plant. This bag fits up around the complete reservoir and pump to catch any fluid leakage that might occur during transportation of the bodies and the completed automobiles to their destinations. It is removed and disposed of prior to delivery of the car as it has no further functional value. 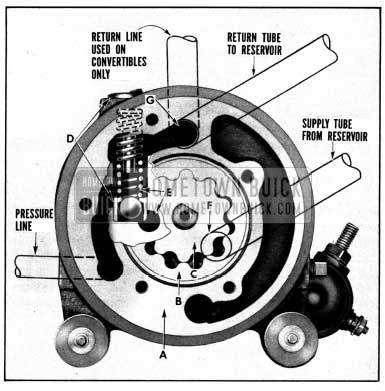 The hydraulic pump operation explained in the following paragraphs concerns the “solid type” internal rotor pump. The operating principles of the other pumps used on 1952 Buick Hydro-Lectric installations are the same as explained herein.

The hydraulic pump consists of a pump housing “A” which contains the free moving external rotor “B” and the motor driven internal rotor “C”. The pressure relief valve “D” extends into the housing to control the fluid flow through the cavities “E” in the housing. An end plate is attached to the pump housing to cover the rotors and fluid cavities. The end plate has a fluid supply tube and a return tube (see above illustration) that extend into the fluid reservoir. The supply tube opens into the area indicated at “F” and the return tube opens into the area “G”.

NON-OPERATING POSITION (OR LOWERING A WINDOW) 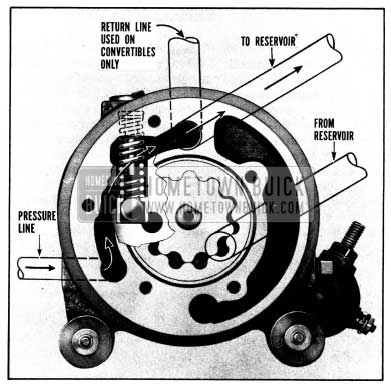 When the motor is not energizing, the pump is in the non-operating position with the rotors remaining idle and the pressure relief valve in its normal position as shown in the opposite illustration.

This is the position of the pump when a window is being lowered or the seat is being moved rearward (no fluid is pumped for these operations). The fluid in this case returns via the pressure line, goes through the pressure relief valve spring as indicated by the arrows, and drains into the reservoir. To raise a window, the motor is energized and starts the pump rotors moving in the direction shown. Fluid from the supply tube “F” fills the openings between the lobes of the rotors and is carried to the cavity “E” where it is forced out from between the rotors and builds up pressure against the pressure relief valve “D” which will then open as shown and allow the fluid to enter the pressure line to raise the window. This is the same action that takes place when the top is operated except that in the operation of the top, fluid from the top operating cylinder is routed down the return line into the reservoir at the same time.

OPERATING AT MAXIMUM PRESSURE (WHEN WINDOW IS FULLY RAISED) 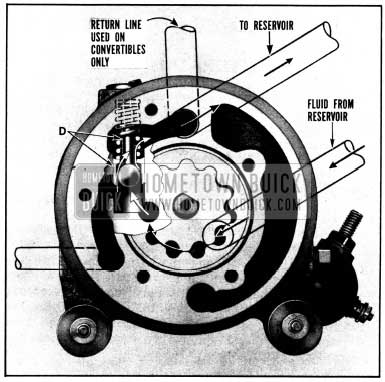 When the window reaches the fully raised position, pressure builds up to a maximum of 250 PSI to 260 PSI. In this case, the pressure relief valve “D” is pushed down still further until the ball is unseated and allows fluid to escape through the valve to the reservoir.  This valve action keeps the pressure from going above the maximum setting and causing damage to the system. 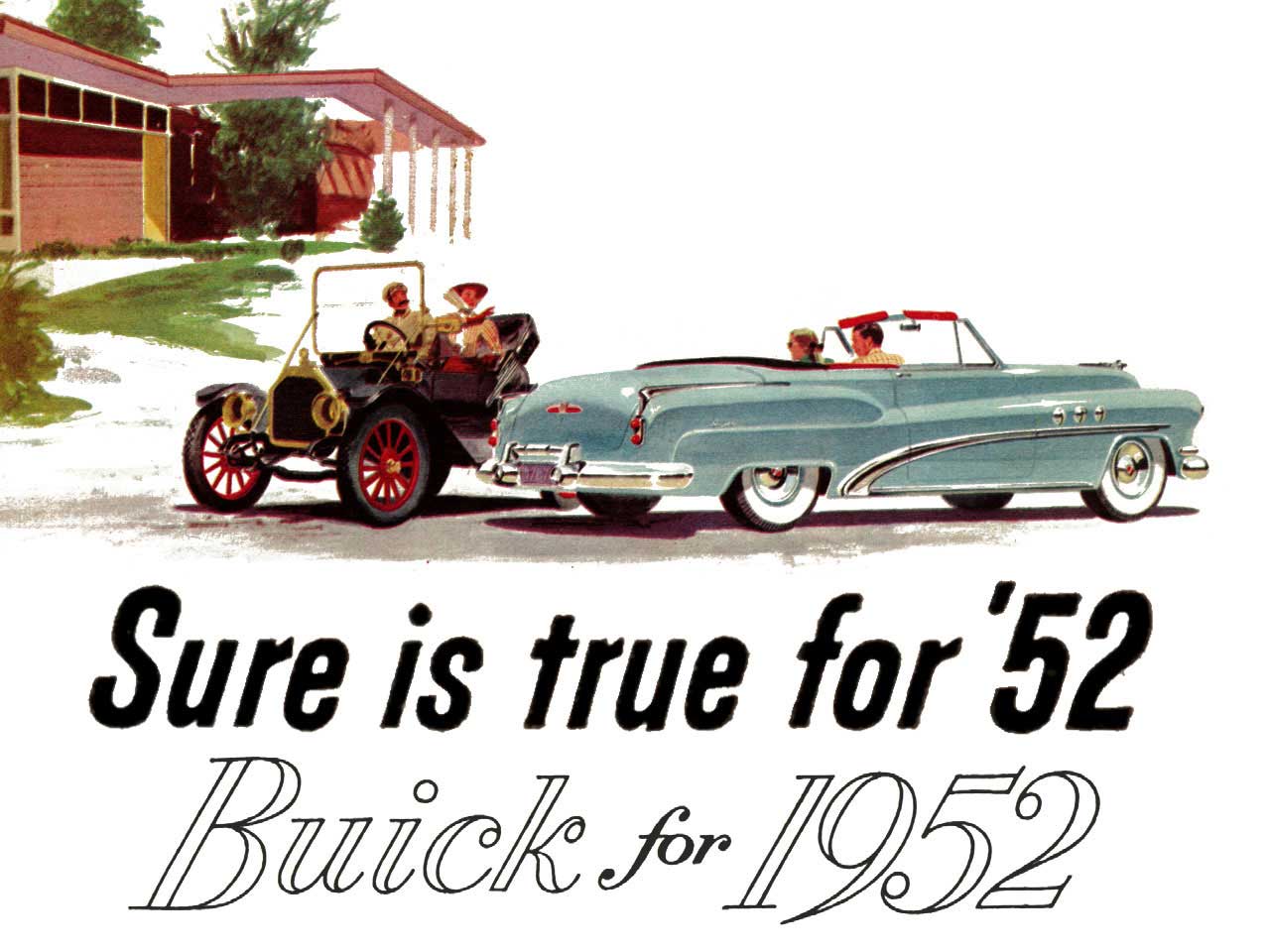