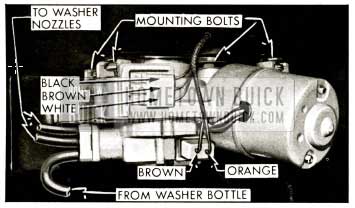 To operate the 1959 Buick windshield washer, the button on the switch must be pushed in or forward. In so doing, the wiper switch knob is mechanically rotated by the button, to the slow speed position. After the washer has stopped, the knob must be manually turned back to the off position to stop the wiper blades. The blades always return to the park position when the switch is turned to off. If a faster wiper blade speed is desired, the knob should be turned all the way in a clockwise direction.

The single speed wiper switch has no button and is only a single position switch. When the switch is turned to the off position, the blades do not return to a full park position, but a few inches away from the reveal molding. See Section 1-E for service procedures on the single speed windshield wiper.

All motors are held to the upper cowl by four bolts. The bolts come in from above and thread into special nuts located in “T” slots on the top of the motor body casting. The nuts are mounted in rubber for quietness of operation. A water deflector is used on the motor shaft and is located under the motor drive crank arm.

Each wiper transmission is held to the upper cowl by three screws. See figure 1-15.

(a) “Lo” Speed – When the switch is turned to the “Lo” position current passes from the live feed (Brown) through the circuit breaker, which is located inside the motor case to the green lead. See figure 1-16.

(b) “Hi” Speed – When the switch is turned to “Hi” position, the motor shunt field circuit is no longer grounded due to the switch position. See figure 1-17.

(c) “Hi” or “Lo” to Off- When the dash switch is turned to the off position, only the relay coil circuit is opened, stopping current flow through the relay. The motor circuit remains in operation until the relay switch control tab is mechanically opened by the drive pawl as the pawl contacts the stop arm. The relay switch control then opens the motor circuit and the motor stops with wiper blades positioned in park.

(a) Motor Switch Turned to “Lo” or “Hi” – Previous to the switch being turned to either “Lo” or “Hi” the drive pawl is in contact with the stop arm. See figure 1-18. 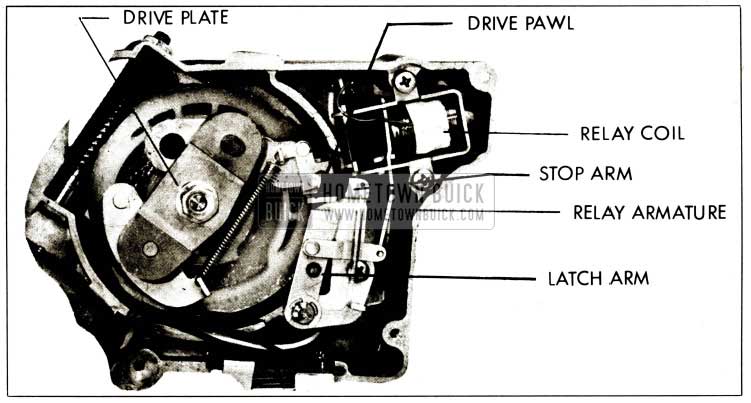 As the switch is turned on, the relay coil is energized. This moves the armature into the relay and the latch arm out of the path of the drive pawl. At the same time, the motor circuit is also completed. 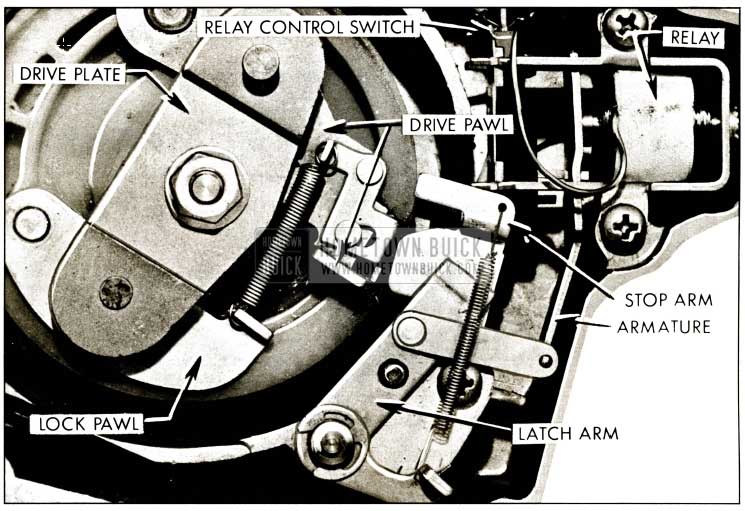 (b) Motor Switch Turned to Off – As the switch is turned to the off position, the relay circuit is opened with the motor circuit remaining closed. The spring loaded latch arm moves out into the path of the drive pawl since the relay is no longer energized. When the drive pawl contacts the latch arm, the drive plate, drive pawl and lock pawl are held from rotating with the nylon gear and eccentric shaft continuing to rotate. See figure 1-20. 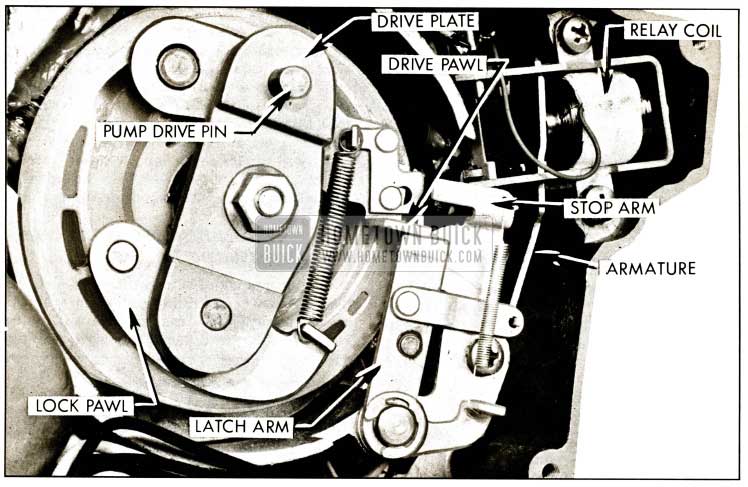 The guide pins in the drive pawl and lock pawl have been forced out of their pockets in the nylon gear.

Any time that the motor is turning, a guide pin on the motor drive plate assembly turns an elliptical shaped nylon cam follower in the pump assembly. The cam follower contacts a roller on the ratchet pawl lever. See figure 1-21. 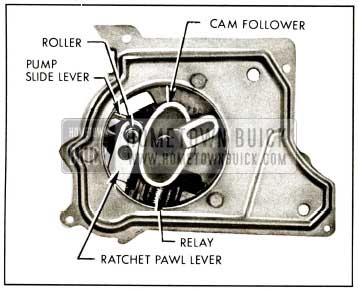 Two other shafts are located on the ratchet pawl lever, on the side opposite the roller. One of the shafts supports the ratchet pawl, while the shorter shaft actuates the pump slide lever. See figure 1-22. 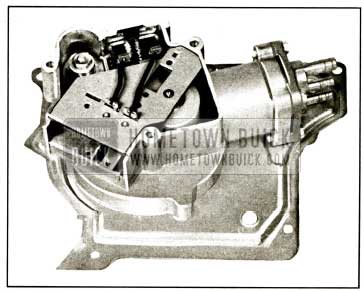 The nylon ratchet wheel has a ramp on the side down toward the pump slide lever and also a notch on the top side. The ramp has two functions. First, as the ratchet wheel rotates, the ramp makes contact with a relay armature hair spring to move the spring from under the armature and allow it to drop toward the ratchet pawl. Secondly, it contacts a tang on the pump slide lever which allows the tang to climb up on the ramp and stop the pumping action.

A relay within the pump housing is energized anytime the washer button is depressed. See figure 1-23. Testing is divided into two testing sections. The first section is testing to be done with the wiper motor on the car. The second section covers testing with motor removed. See figure 1-24. Testing with motor installed consists of checking the wiring, switch and wiper linkage.

If unit is equipped with washer pump, check also for 12 Volts at the brown lead terminal which connects to washer pump. 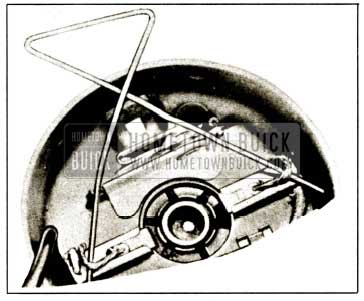 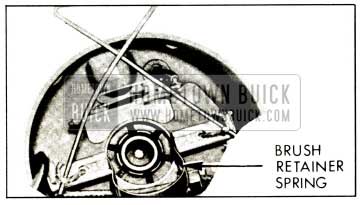 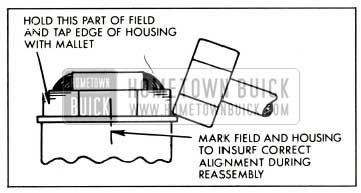 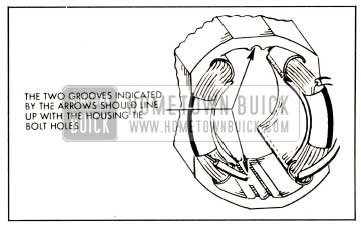 1959 Buick Disassembly of Relay and Latch

Solder existing green and yellow wiper leads to relay control switch and solder the relay coil lead to the wiper unit terminal board as shown in Figure 1-32. 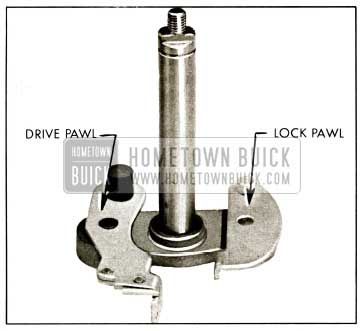 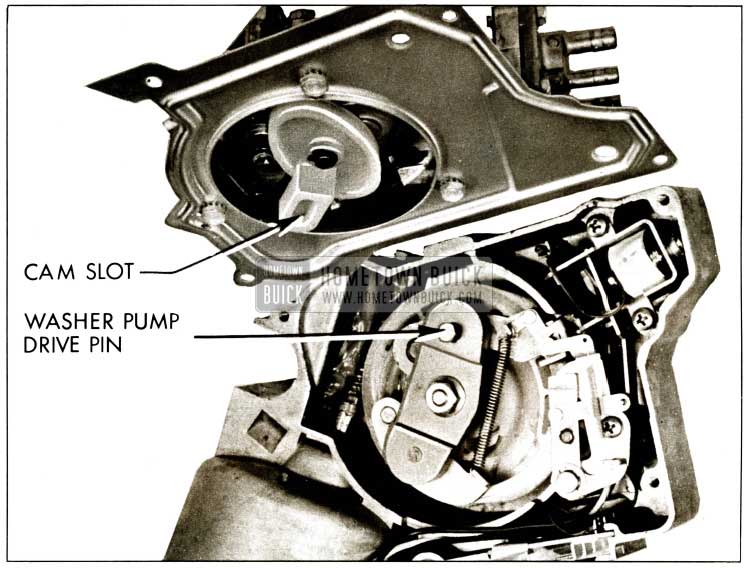 1-10 REMOVAL AND REPLACEMENT OF ASSEMBLIES 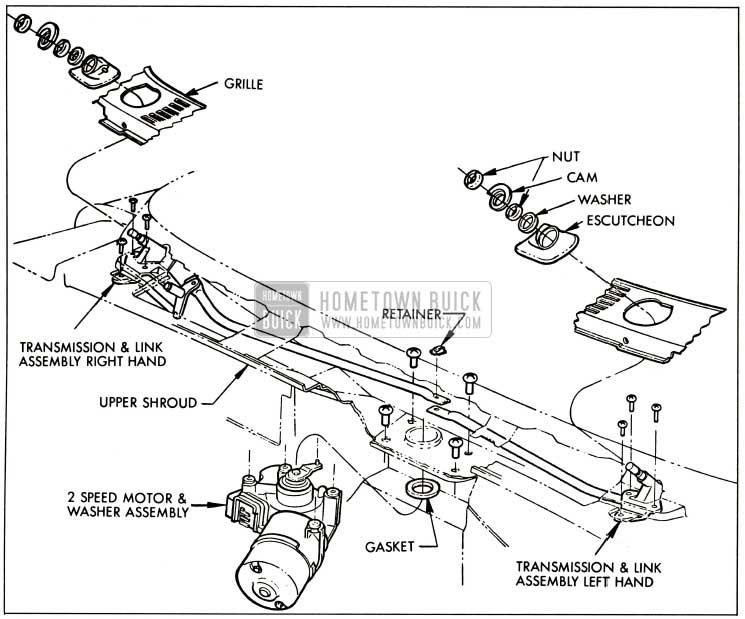