Brake squeak complaints have been reported on 1956 cars, even though the drums and brake lining have been inspected and found to be in fair condition. Several corrections were tried, such as breaking all corners and roughing the lining surface, but they were to no avail, as the squeak re-occurred within a day or so. This squeak is come times referred to as a ”pinch -out squeak” and it occurs at the end of a brake application just before car comes to a dead stop. This pinch­out squeak may not always be present at the end of each brake application; therefore, some owners may notice this squeak more readily than others.

We have been advised by our Engineering Department that a new brake anti-squeak spring, Gr.5.810 Part #1178586, is more effective in eliminating brake squeak complaints; therefore, it will replace spring Gr. 5.810 Part #1345469 previously recommended. The new spring, however, is more difficult to install due to the increase in tension; therefore, it is recommended that the following installation procedure be closely followed: 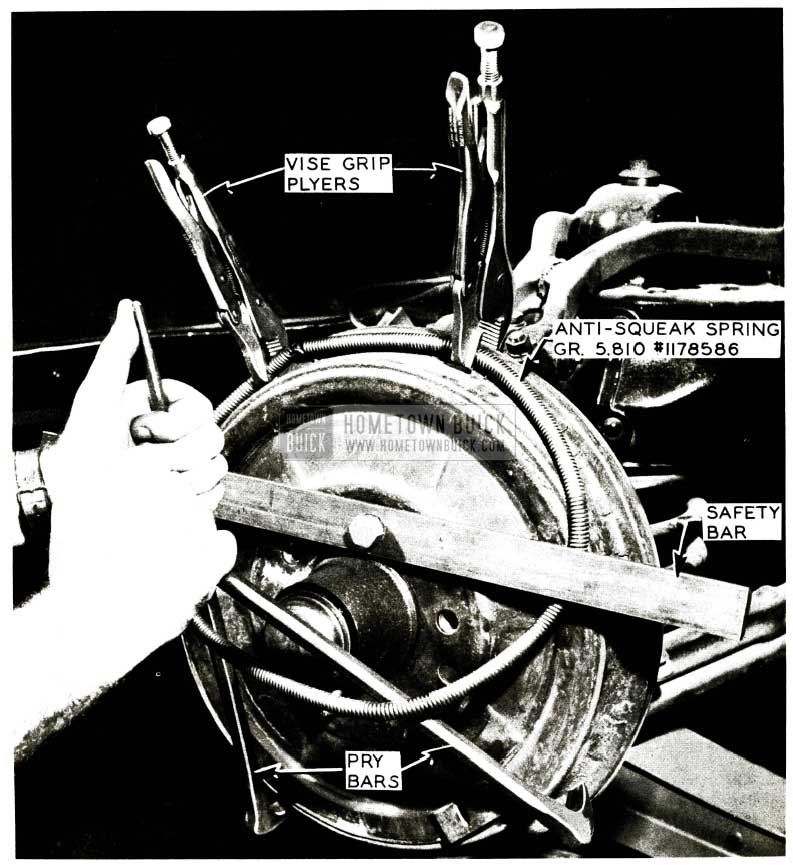 The vise grip, installed in Step 2, will hold spring in position once it 1s expanded around drum. 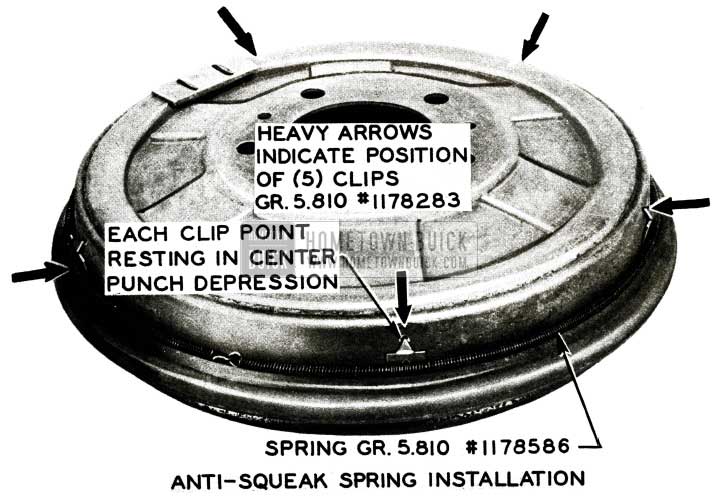 NOTE: It is desirable to point center-punch toward outside of drum away from backing plate when making depression. Obviously, this spring and clip will not correct squeaks due to scored drums or metal imbedded in lining. It is, therefore, recommended that on a squeak complaint, drums and shoes be inspected and drum turned if necessary, then sand linings by use of a spindle mounted type of brake shoe grinder or other suitable method.

According to information received on product reports, indications are that some dealer service men are installing a small compression spring between the foot pedal and floor pan of power brake equipped cars to relieve a bind in the pedal, and in some cases are performing grinding operations on other related parts to obtain full pedal travel.

Complete information on checking alignment of the power brake eccentric pivot pin and pedal has been covered inBPS2.387datedNovember23, 1955. Any deviation from factory recommended service procedure may be detrimental to the performance of the power brakes and the factory cannot assume any responsibility for unauthorized procedures; therefore, this practice must be stopped.

We have been advised by our Engineering Department that Dynaflow oil is no longer recommended for lubricating the power brake piston or cylinder housing. When servicing a power brake unit, only power brake cylinder oil Gr. 4.898 Part #1165078 should be used to lubricate the piston and cylinder. Therefore, will you please make this correction in the 1956 Shop Manual on page 9-30, paragraph c, step 16.

Reports have been received that some parking brake pedal and lever assemblies would not hold in the applied position because of being improperly adjusted. Whenever this condition is encountered it may be corrected by adjusting the parking brake release rod trunnion so that when the parking brake is in the fully released position, the release rod spring will be compressed approximately 1/4″ to give it a desired preload of approximately 4 to 6 lbs. It is important to have this spring pressure exerted against the lever trigger because it is this pressure that insures proper holding of the pedal.

This important adjustment can be accomplished by performing the following: 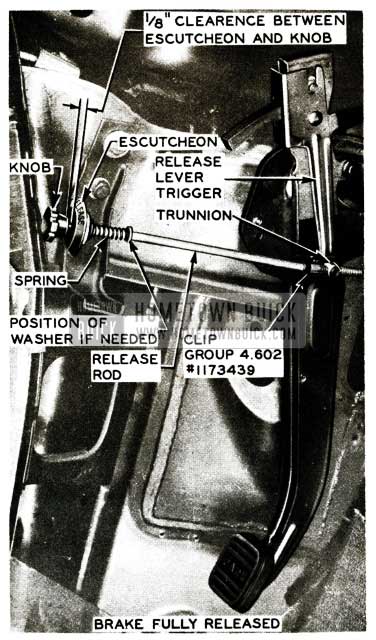 NOTE: Rattles have been reported to exist at this location because some early 1956 models had the release rod trunnion secured in position by a cotter pin. However, this can be corrected by installing the 1956 after job Clip Gr. 4.602 Part #1173439 which retains the rod and trunnion assembly to trigger lever See Figure 73.

NOTE: If knob is pushed on shaft as far as possible and clearance exceeds 1/8” and is objectionable to the owner, it will be necessary to install a washer of proper thickness in front of release rod spring as shown in Fig. 73. Doing this will reduce the clearance by the thickness of the washer installed. After washer installation it will be necessary to repeat steps 3 through 6.

We have been advised by Engineering that several changes are being incorporated in our 1956 direct acting brake master cylinder. Figure 8 shows comparison between first type and second type cylinder. The master cylinder bearing has been redesigned in that the primary cup insert is now an integral part of the bearing, with the primary cup washer made captive on bearing. See insert Figure 74. 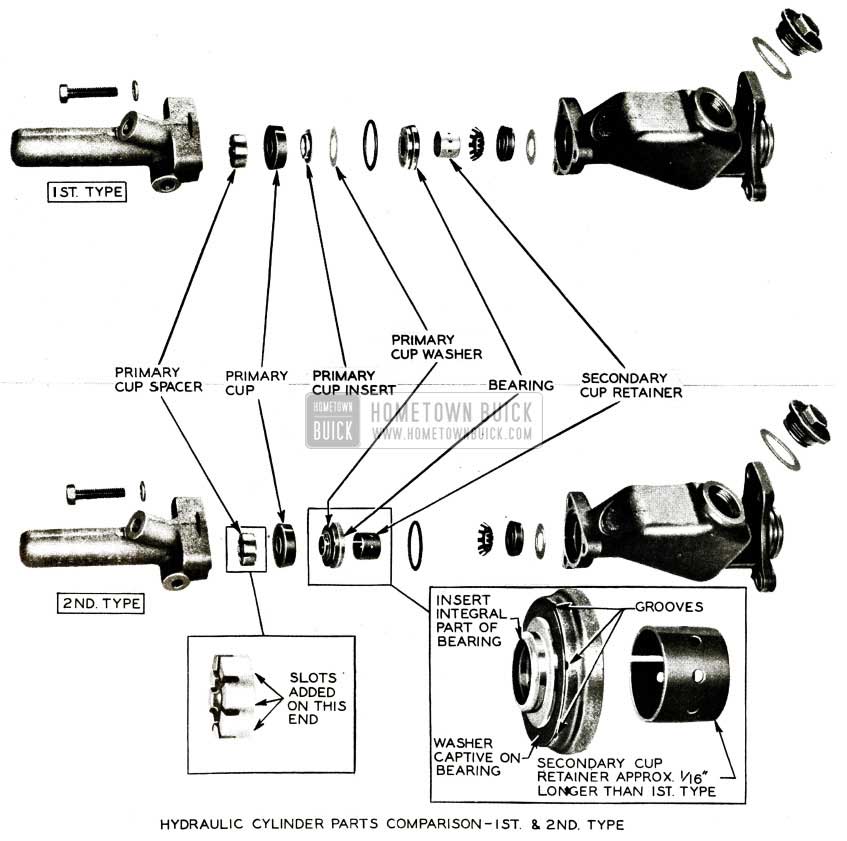 Another change made in the bearing was the addition of a groove which extends outward from each of the five (5) holes at front end (primary cup support end) to O.D. of bearing. These holes in the bearing conduct fluid from the reservoir to the hydraulic cylinder and by providing the additional grooves, fluid flows around the primary cup lips more quickly during pedal release action to fill the hydraulic cylinder.

In addition to the above changes, both ends of the primary cup spacer now contain slots to facilitate passage of fluid at each end; previously, only end opposite primary cup was slotted.

When installing the new kit, thoroughly clean hydraulic cylinder, including inside of reservoir to make certain that all traces of foreign material are removed. Lubricate new seals with clean brake fluid prior to installation. Figure 74 shows the position in which new parts should be installed.

NOTE: It is imperative that all parts contained in Kit #5455765 be installed. Under no circumstances should first type kit parts be used with those contained in second type repair kit #5455765.

The new repair kit does such an effective job that zones will not accept AFAs for brake master cylinder assemblies in the future.

In addition to the above changes the present master cylinder Gr. 4.650 Part # 5455250 will be replaced by a new master cylinder Gr. 4.650 Part #5456000 which will incorporate the new parts shown in the inserts of Fig. 74.Also, a bearing package Gr. 4.653 Part #5455788 will be made available and will include the new bearing assembly, primary cup spacer and secondary cup retainer (parts identified in inserts Fig. 74) and will replace the following parts contained in first type cylinder.

A few reports have been received that the suspended brake pedal on early 1956 Dynaflow jobs tends to twist and bend the pedal plate, during brake application. This condition can be corrected by first removing the pedal pivot lock nut, bolt and pedal, as well as the dash insulator retainer shown in Figure 75.

Center punch hole location in cowl panel through unused hole in bracket. Then drill a 9/32″ hole through cowl and install a 1/4 x 20 x 3/4″ bolt, flat washer, lock washer, and nut and tighten securely to the cowl panel. See Figure 76.

This additional bolt has been installed in production and may be observed when the hood is raised as shown in Figure 77 and 78. 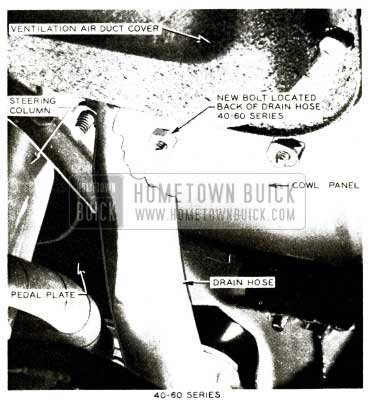 On some power brake jobs only, another problem may be encountered in that the angle of the pedal plate on which the brake cylinder and pedal are mounted, does not conform with the angle of the cowl panel. When this condition exists the pedal plate may become distorted when bolted to the cowl, causing an out-of-alignment condition between pedal and power cylinder; it may also cause interference between push rod and air valve sleeve. Correction for this misalignment should first be attempted by performing the following: 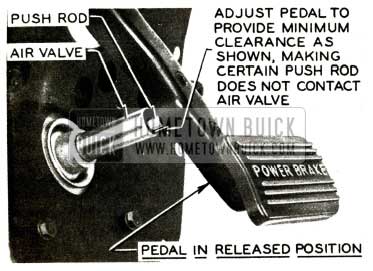 If this out-of-alignment condition cannot be corrected by the eccentric bolt adjustment, it may be necessary to shim between the pedal plate and power cylinder using flat washers as shown in Figure 80. 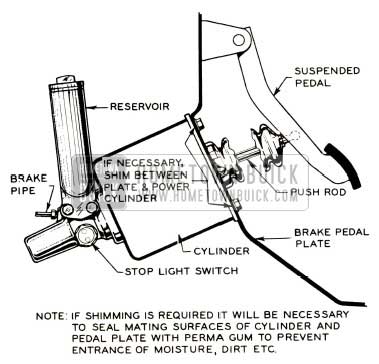 However, if neither the eccentric bolt and shimming adjustment does not correct the out-of-alignment condition, it will be necessary to remove the pedal plate and bracket assembly and replace it with a new one.

Reports have been received that on some cars the power brake pedal was slow in returning or would not return completely to its normal position. It has also been reported that the following sources of vacuum leaks have been found to exist in the power brake cylinder. These leaks can be classified into three categories:

In most cases these vacuum leaks will cause a rough engine idle. However, in order to eliminate the possibility of a vacuum leak elsewhere as the cause of the rough idle, it is suggested that all other possible sources of vacuum leaks be checked thoroughly before attempting any service work on the power brake cylinder. The corrections for the above described condition are as follows:

To install this spring, the following procedure must be followed: 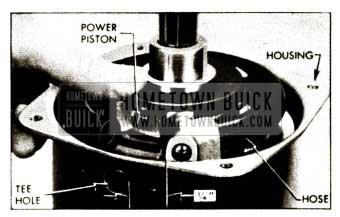 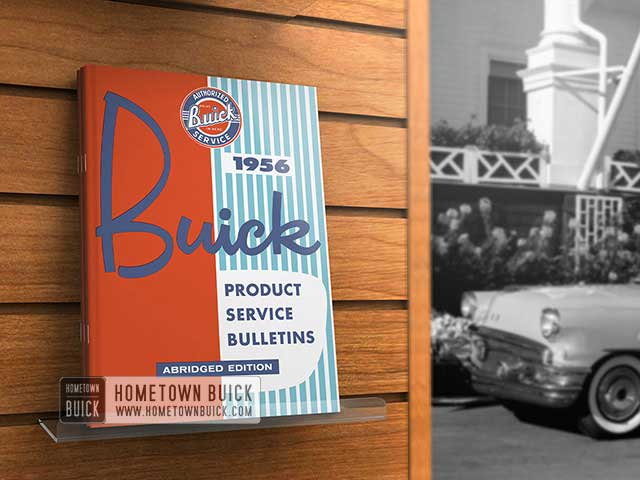