Fig. 131 illustrates a tool that will aid in the removal of torque converter covers. In most instances the tool can be manufactured out of a dealers existing inventory. 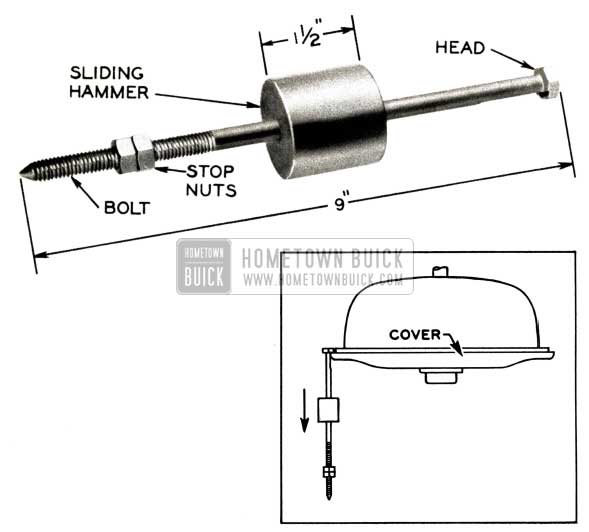 The bolt, Group 9803, Part No. 1334600 (heater air duct body front and rear to frame), as shown in Fig. 131 is used on the 1949 Series 50 and 70 Buick and is obtainable from the Parts Department, although any similar bolt with approximate specifications is suitable.

The hammer is merely a piece of iron (any shape will work satisfactorily) drilled through the center to allow free movement over the bolt, giving the action of a sliding hammer.

This preparation can be very effectively used as a rubber anti-squeak and a barrier to the atmosphere to reduce oxidation of rubber parts. The material is now in use at Fisher Body plants and they report that No. 7 Emulsion can be applied much easier and more economically than the paste type “DC-4” compound.

DC No. 7 Emulsion is available in the following bulk quantities:

Orders for No. 7 Emulsion can be placed through any of the following Dow Corning Sales offices:
Dow Corning Corporation
1343 Spring Street, N. W.
Atlanta, Georgia