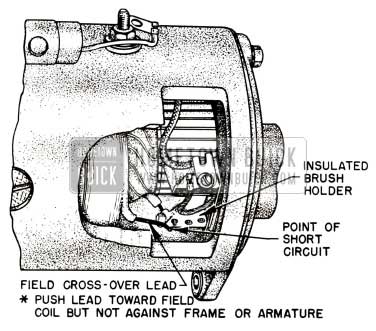 (1) Check all cars having generators of this type built between June 1, 1951 and December 1, 1951. Generators can be identified by Serial No. Code Date on name plate (Figure 38). 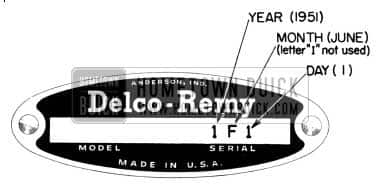 (2) If cross-over lead touches or nearly touches insulated brush holder, push lead back toward field coils but not against frame or armature (Figure 37).

(3) Whenever a shorted cross-over lead is found or charging is unsatisfactory, the regulator points must be checked for resistance caused by excessive oxidation.

To check for oxidized contact points insert an ammeter at “BAT” terminal of regulator (Figure 39). Tum on headlights. Operate engine at a speed which will produce approximately 5 amperes output. Ground “F” terminal of regulator. If output increases more than 2 amperes both voltage and current regulator points must be cleaned and adjusted.

Discoloration does not necessarily indicate serious point damage. Cleaning should be attempted unless point material is actually badly    burned. Upper contact supports are available as service parts and may be replaced if necessary. Replace the entire regulator only when points cannot be put in serviceable condition by cleaning or replacement of upper contact supports.

Upper contact supports of voltage and current regulator units must be removed for proper cleaning of contact points. Disassemble as shown in Figure 40. 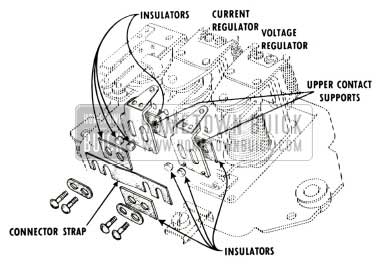 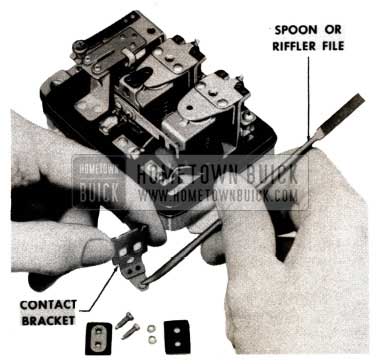 After cleaning regulator contact points, reassemble upper contact supports as in Figure 40. Check air gap by pushing armature down until contacts are just touching and then measuring with gauge (Figure 42). 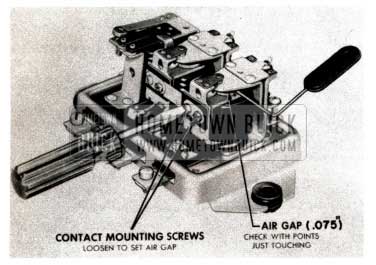 Adjust by loosening contact mounting screws and raising or lowering contact support as required. Be sure points are lined up, and tighten screws after adjustment.

It has been reported from the field that there is an increasing use of the dwell angle in preference to the dial indicator in point setting operations.

It is again stressed that no cam angle setting is given by Buick since checking and adjusting contact point opening by means of dwell angle measurements not recommended.

Therefore, reasons for the use of the dial indicator over the dwell meter are numerous:

These are only a few of the more important reasons why there is considerable variations in contact point opening for a given cam angle. In some cases, contact points adjusted to a give n cam angle will have the expected point opening, while in others the point opening may be much less than the minimum required for good ignition. Tests have shown where points, after having been set correctly by a dwell angle meter, were as much as .004 to .006 outside of production limits when checked with a dial indicator. When this condition exists, the danger of using the dwell meter for setting or checking contact point openings can readily be seen.

For the reasons given, it is not possible to specify a cam angle setting which will insure correct contact point opening under all conditions. A dwell meter, to operate satisfactorily, must have a correct condition of electrical circuit, parts condition, and dwell meter unit operation. Therefore, checking and adjusting contact point opening by means of dwell angle measurement must be cautioned against if satisfactory settings and subsequent proper operation is to be expected.

For years different devices have been marketed for the purpose of tightening worn distributor breaker plates. The advent of the present Delco center bearing breaker plate in 1951 made these devices totally unnecessary. However, many servicemen are still condemning assemblies that will operate efficiently for thousands of miles.

The so called “Gremlin” in this vital part usually termed “side play.” When a breaker plate assembly is removed from a distributor, it is possible to push the movable plate and bushing assembly from side to side in the support plate. Also, it is possible to actually tilt the movable plate. Neither of these conditions indicate excessive side play in the assembly. In practically all cases, no more side play is present in an assembly after 20,000 miles of operation than would be present in a new plate.

To understand this, we must consider the design of the plate. 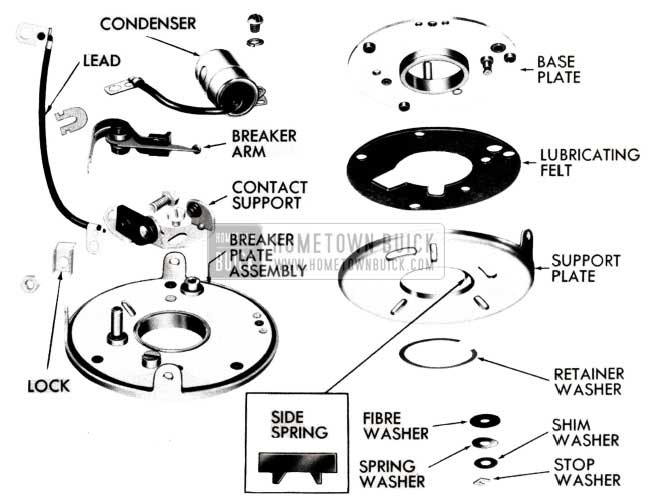 Do not change this friction setting as the power of the vacuum advance is limited.

Breaker plate design is such that the center bushing extends through a hole in the support plate. This can’t be a tight fit and still permit free rotary movement, so the hole is made about .005” larger than the outside diameter of the bushing. Fitted in a slot between the outside wall of the bushing and the support plate is a small side spring. (See Figure 43).The assembly is held together by a retainer washer fitted in a groove on the lower outside diameter of the bushing.

The side spring pushes the base plate in the same direction as the force exerted by pressure of the rubbing block against the cam. Therefore, slight side clearance can’t cause plate wobble under these conditions, because the side spring is holding the plate in the position in which it must operate.

Since there is clearance between the distributor shaft and the internal diameter of the bushing, the shaft can’t cause plate wobble either.

In summary, controlled side clearance is an essential part of the breaker plate design. Closer inspection should be made of breaker plates before condemning them as being defective.

In accordance with requests from the field, instructions are herewith given for making the Sun 3 Minute Battery Test. This procedure is featured in the battery service meetings now being conducted in the Zones by Sun Electric Company Representatives.

Effective with batteries built during July, the Delco-Remy Division has changed the date coding used on storage batteries. The new code is similar to that formerly used except that January is indicated by the letter “D”, with each succeeding month in order; but, omitting the letter “I”. The final letter in the series will be “M”, followed again by “A”. The first digit in the code indicates the year as formerly except that the numeral for October, November and December batteries will be the same as for the next year.

Date codes for 1952 and 1953 Muncie built batteries will be as follows: 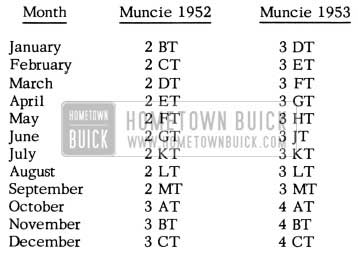 Batteries built at New Brunswick are coded the same except that the second letter is “X” instead of “T”.

Due to the complaints from customers of short battery life, it has been called to our attention that some of our dealers are using plain tap water for servicing batteries. This practice has always been cautioned against. In Paragraph 10-17 of the 1952 Shop Manual under Electrolyte Level, it is stated that pure water is to be used to maintain the proper electrolyte level. At the end of Paragraph 10-18 we state, “Do not overfill, a selectrolyte may be sprayed out by gassing during charging. After filling, see that gaskets are in place when filler plugs are installed and tightened.”

It is felt that the mechanics and/or dealers will have a more accurate conception of the term “pure water” if we use the term “distilled” water instead. Thus, we hope to alleviate the possibility of short battery life due to water which is not chemically pure. It is known that water having a quantity of chlorine or minerals in it is detrimental to a battery and should not be used for maintaining the proper electrolyte level.

It is also imperative, in protecting a battery, to take every opportunity to check the level of the electrolyte. If this level is allowed to become low, thus allowing the tops of the plates to become exposed, the acid will reach a dangerously high concentration that will in turn char and disintegrate the wood separators. It is just as important to maintain the correct electrolyte level as it is to use distilled water when servicing a battery.

It is important, especially at this time of the year when great demands are made on batteries, that an all-out effort be made to check on battery servicing and to make sure proper procedures are being followed for their care.

Production generator assemblies used since approximately August 9, 1951 (See Page 37, 1951-52 Abridged Edition) contain armatures with an unequal number of turns in adjacent slots. The armature contains alternate 2 and 3 turn windings and is referred to as a turn armature.

Special characteristics of the alternate-wound armatures make it important to remember the following points:

The regular variation in readings on the alternate -wound armature is normal for this design and does not indicate a defect.

NOTE: Alternate-wound armatures furnished for service carry a new part number; but, in case of doubt, the type can be quickly identified by the growler bar-to-bar check. (The bar-to-bar check is not mentioned in the Buick Shop Manual but is thoroughly covered in most instruction manuals furnished with generator testing equipment.)

Alternate -wound armatures must be used only in the generator models for which they are specified Interchangeability of uniform and alternate-wound types, without also changing the generator regulator, will result in burn-outs and rundown batteries.

A few complaints have been received from the field pertaining to the generator armature terminal output wire shorting at the power steering pump bracket on cars so equipped. When a short of this type occurs, (See Figure 44) the generator becomes inoperative and destruction will follow immediately. 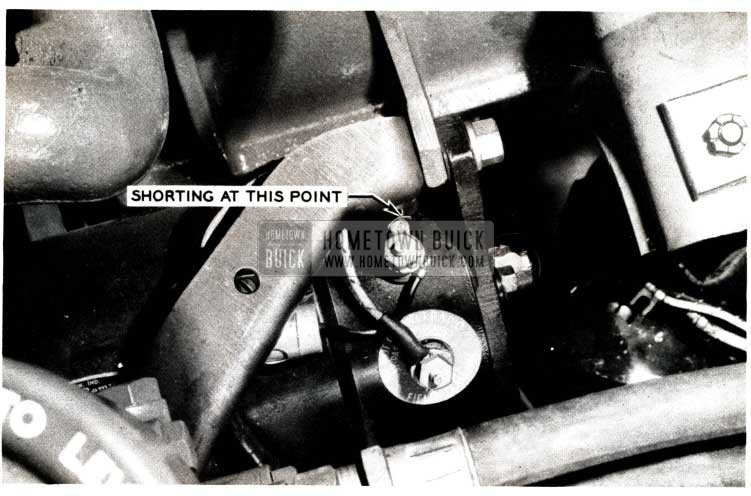 Future production power steering gear pump brackets will be revised with an increased radius at the engine mounting end to alleviate the possibility of such a short occurring.

It is suggested by the Engineering Department that 50 Series cars equipped with power steering be checked for a condition of this type and remedied by loosening the generator armature terminal nut and rotating the wire and terminal away from the steering gear bracket as shown in Figure 45, then retighten the nut to proper torque. 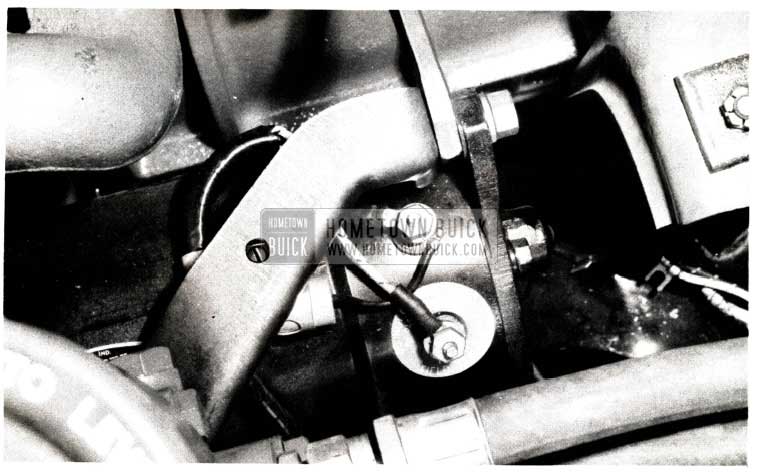 We have been receiving a number of complaints that direction signal switch operating levers on 1952 models are coming loose and falling out.

This has been traced to improper tightening of the Allen set screw in production and has been corrected at the factory and assembly plants.

When this trouble is encountered, the set screw should be tightened as hard as possible with a “T” handle Allen wrench. It is unnecessary to remove the entire steering wheel assembly to tighten or replace the lever. Access to the set screw can be gained through the steering wheel puller slots in the wheel hub by merely removing the emblem cap, (or horn button on jobs with a solid spoke wheel).

A parking brake warning signal is included in the Safety Package provided as standard equipment on all Series 70 models and optional on Series 40-50. A red warning light is mounted beneath the instrument panel between the steering column and brake release knob. When the engine is started with the parking brake engaged, the light flashes a warning signal.

The plunger in the switch assembly must be compressed 3/16″ when the brake lever is in the “off” position. Adjustment is made by slotted mounting holes in the signal bracket. The signal utilizes a six-amp fuse which is clipped on the upper portion of the assembly bracket (over the switch) on Series

40 and on a separate bracket under the instrument panel (to the right of the wiper control button) on Series 50-70. A No. 210 (15CP) bulb is used in the signal light housing.

A diagram of this installation is shown in Figure 46, and full installation instructions will be included in the package when the signal is ordered for dealer installation. 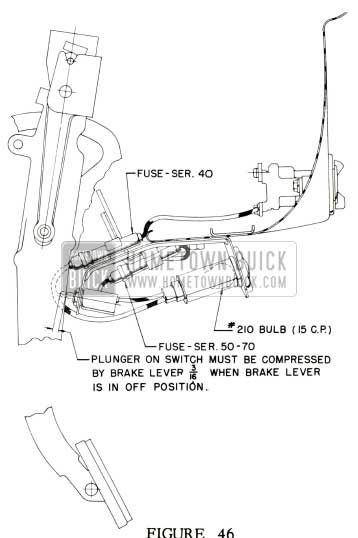