During January, February and March and part of April a critical material situation forced us to use some Dynaflow oil coolers fabricated from material other than Cupro-Nickle or copper.

Some internal and external cooler leaks have been reported and investigation revealed that the cause was due to the substitute material used.

To avoid the possibility of water and anti-freeze entering the Dynaflow transmission, it has been decided to campaign change the following oil coolers:

All coolers built in 1951 are marked at the rear end on the transmission side with the Harrison name and a code for the date of manufacture and material used. For example:

Checking the cooler by visual inspection on the car is rather difficult, but can be done. You will find it necessary to use a good flashlight and a mirror after carefully cleaning the rear end of the cooler. The code marking is just above and ahead of the rear edge of the transmission pan, on the inside surface.

Because of the difficulty in identifying the coolers, replacement coolers should be marked on the bottom edge with 1/2” daub of white paint at time of installation. This will enable the men to readily identify cars which have been campaigned.

It is suggested that your Service Department personnel, and especially lubrication men, watch all cars built during the early months of 1951 for symptoms of internal or external oil cooler leaks.

Dynaflow oil may be checked for water content by the following procedure:

If the oil is found to be contaminated when using either procedure, it will be necessary to completely drain oil pan and converter and then refill the unit with fresh Dynaflow oil. Do not flush the transmission.

In cases where leakage is apparent by one of the above symptoms, the service work required will depend on the circumstances in each instance. For example, if the Dynaflow oil appears OK but there is obviously some Dynaflow oil in the engine cooling system, carefully flush the cooling system after replacing the cooler. In extreme cases it may be necessary to use a cleaner such as Sal Soda or one of the purging type cleaners which many of you have.

Where engine coolant has entered the Dynaflow unit, the Dynaflow should be warmed up and thoroughly drained by removing converter drain plugs and the pan and tilting car forward to get as much of the mixture as possible out of the rear bearing retainer. If Dynaflow level was extremely high or if oil looks very bad, it is advisable to flush the transmission with 10-W motor oil, idling the job for 10 minutes and shifting into all ranges at regular intervals, before refilling with new Dynaflow oil. A permanent anti-freeze mixture in the transmission is likely to cause more trouble than an alcohol-water mixture.

Dealers may list more than one serial number on an AFA when removing and. replacing the cooler. In such cases the serial numbers, models and repair order number must be shown in the body of the AFA. AFA’s will be accepted in the usual manner for parts and the labor cost of removing and replacing the cooler, per flat rate operation 7-132 at 2.5 hours.

This campaign applies to all early production 1951 cars regardless of mileage, age, or car ownership.

Because of a production change after these coolers were used, it is necessary to use the new transmission to cooler inlet pipe included in the cooler package, Group 4.128, part 1390697.

According to information received, the converter clearance gauge templet for the Series 70, as printed in this Abridged Edition on Page 17, does not fit all gauges. To overcome this difficulty, disregard the top of the templet, Line A, Figure 27, as all gauges are not the same height. To rework the 70 Series gauge, line up Line B with the outer edge of the gauge and Line C with the gauging surface of the gauge.

On Page 15 of 1951-52 Abridged Edition you were informed that external hex-head converter drain plugs are now being used in all Dynaflow transmissions. The new plugs, Gr. 4.115, No.1345487, eliminate the removal trouble that is often experienced with the recessed head type. For that reason, the recessed head type is being scrapped by the Parts Department and the new plugs will be furnished for all service replacements.

Whenever the new plug is used as a replacement both plugs must be changed in order to maintain correct converter balance.

xit of the turbine vanes.

The noise may be objectionable but will not result in a part failure. This condition can be corrected, however, by filing the back sides of the vanes at the exit edges with a small 6” mill file. Care must be taken to file off only that amount of metal necessary to remove the hooks, which may be only several thousandths of an inch high.

When installation is made on a 1948-70 Dynaflow or 1949 first type 50 and 70 Dynaflows, having a universal joint that measures 3/4″ from the front face to the shoulder of the front yoke, the counterbored side of the worm should be installed facing toward the rear (See Figure 28). 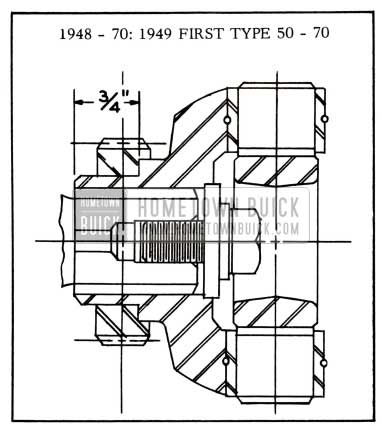 The inner face of the counter bore must butt against the shoulder of the universal joint. Effective with Dynaflow transmissions F-479 (Series 40-50) and G-479 (Series 70), the upper attaching bolt hole in both the torque ball and torque tube front flange was eliminated. Consequently, only 5 attaching bolts are needed instead of the 6 used on former jobs.

Part numbers of the torque ball and torque tube were not changed and it is possible to receive either the 5 or 6 bolt type when orders are placed with the Parts Department. This possibility will continue until all stocks of the 6 bolt type are exhausted.

Some dealers are apparently unaware that the torque balls and tubes are interchangeable and are returning the parts as defective, or are attempting to drill the additional hole. Either type may be used together, but, when both contain an equal number of holes, all bolts should be installed to eliminate the possibility of dirt or oil passing in or out of the joint. The upper bolt should be eliminated if a 5 bolt torque ball is used with a 6 bolt torque tube flange, or vice-versa.

We have encountered a few cases of Dynaflow, primary pump failure caused by cracks on the outer perimeter, adjacent to the cover mounting flange. Investigation reveals that these failures occurred on transmissions that had at one time been disassembled for service.

There are definite indications that the mechanic did not follow the instructions in the shop manual or Dynaflow Manual when assembling the cover to the pump. These instructions state that bolt heads must be held in position with a wide screw driver blade so that the sharp comers of the bolt heads will not dig into the radius on the flange of the pump. It is also imperative to adhere to the correct pump cover tightening sequence to avoid putting a stress on the pump or flywheel.

Service Managers should call Dynaflow mechanics’ attention to the instructions appearing in Dynaflow servicing procedures for installation of the bell housing and torque converter, and make certain they fully understand the importance of following these instructions to the letter.

It has been brought to our attention that a number of Rear Bearing Retainer bushings (Group No.4 .319 Part No. 1338756) were released to the field without the proper internal diameter. Due to their incorrect internal diameter, these bushings will not fit over Bearing Retainer Bushing Remover and Replacer) and will pinch the output shaft if installed in the rear bearing retainer.

All warehouses have been notified to obtain Tool No. J-2997 from the field and check their stock for this bushing with it.

It is suggested to the dealers that all their inventory of this bushing be checked and that if any of the defective bushings are found they be returned to the Warehouse on a WH-7 form, labelled as “defective stock”.

It has been recently brought to our attention that a few cars may have been built with the transmission thrust mounting installed upside down. This throws the torque tube about 15/16″ out of line with the frame tunnel in the centerline of the car and naturally results in a bind in the drive line and misalignment of the rear wheels.

It is difficult to install this mounting upside down but it can be done due to the flexibility of the mountings and can readily be detected by the line-up of the torque tube in the frame.